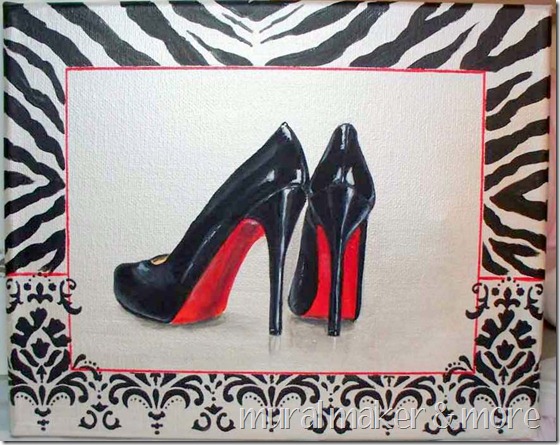 See? I painted these Louboutins for my other niece last February. So I have a little more work to do on the shoes.

No, today’s post is about the background, the scrolls. I have a bit of an issue with backgrounds. As in, it’s hard for me to come up with one. It’s kinda like rearranging furniture – I just can’t “see” it, until it’s done.

When I decided to paint this for my niece, I knew the style and color of the heels but I couldn’t come up with a border or background. *fingers drumming on table* Then I saw it. A Kleenex box covered in scrolls. Perfect. ‘ 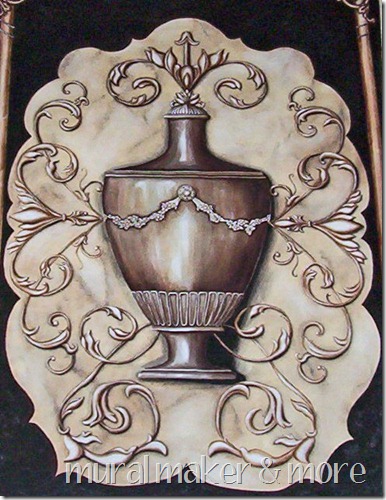 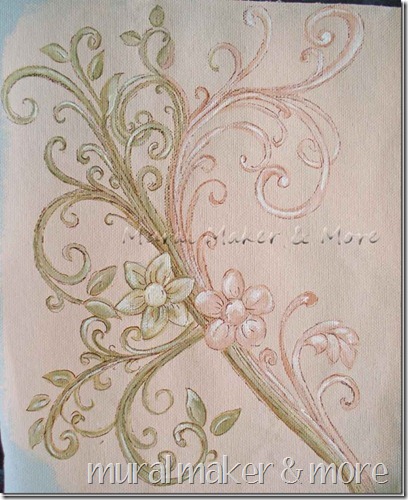 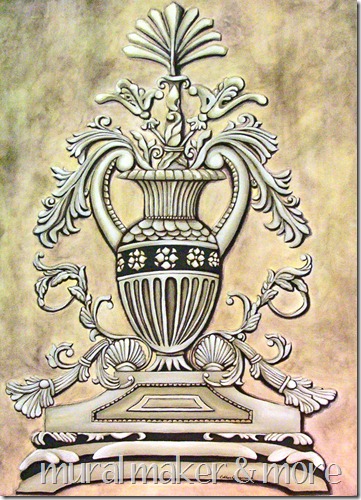 I used to paint tons of scrolls. I’d practice highlighting and shading on them. 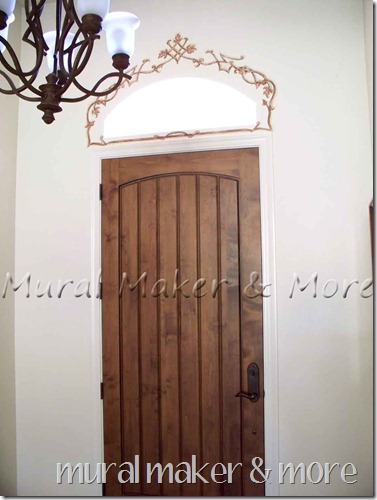 Even when they weren’t all circular. 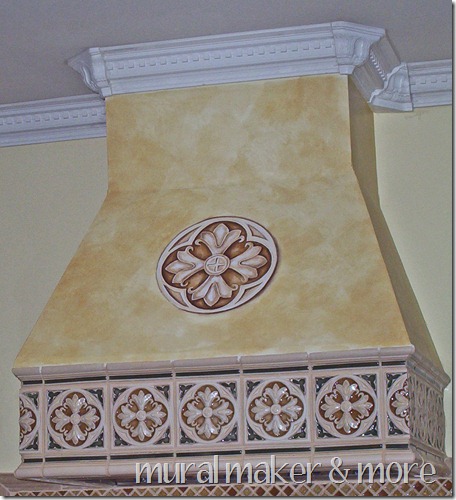 Even when they weren’t even scrolls. ahem. 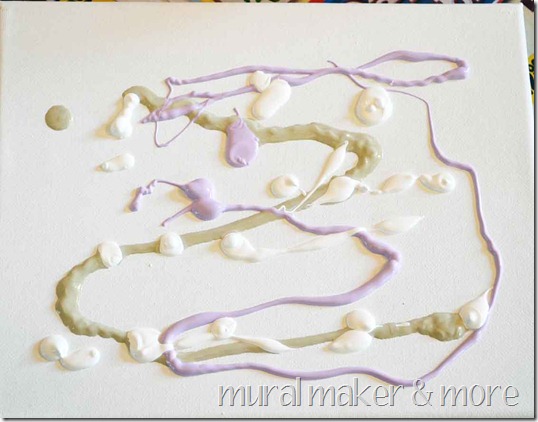 I started off by splattering the canvas with lavender, white, and a tan/grey. 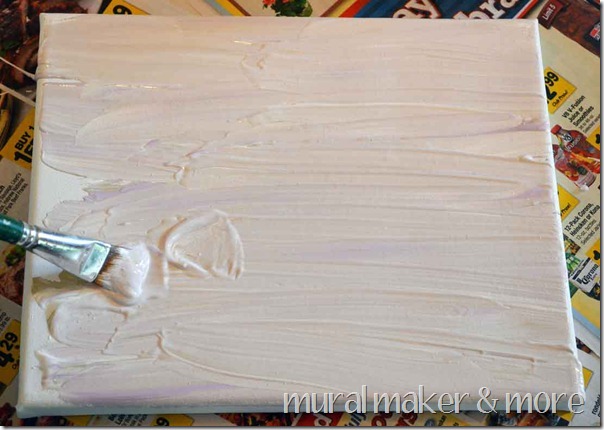 Maybe a little too much paint, judging by my brush.

It happens. But after smooshing and pushing the paint around, it needed quite a bit of time to dry. I was up at the cabin, in the midst of a dark and rainy thunderstorm. (Which is my way of saying the lighting on these pics is atrocious.) 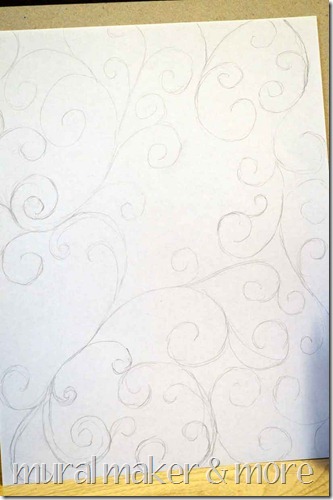 There are tons of ways to draw scrolls but I draw either “C” shapes or “S” shapes. It comes from working for a custom wrought iron company for a bit and watching the blacksmiths forge and bend iron into incredibly beautiful shapes. 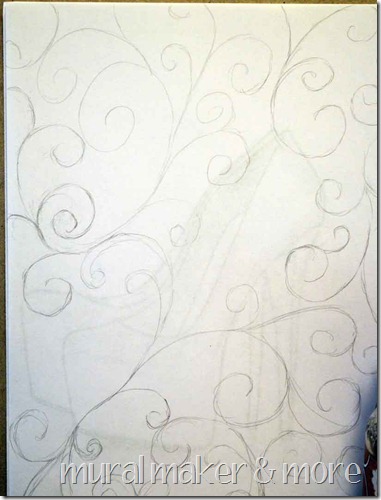 I was having so much fun doodling I almost forgot the shoes! 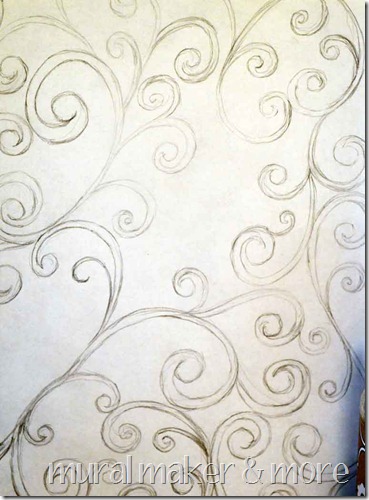 Next, some thickness. Just for fun. (and the paint wasn’t dry yet.) 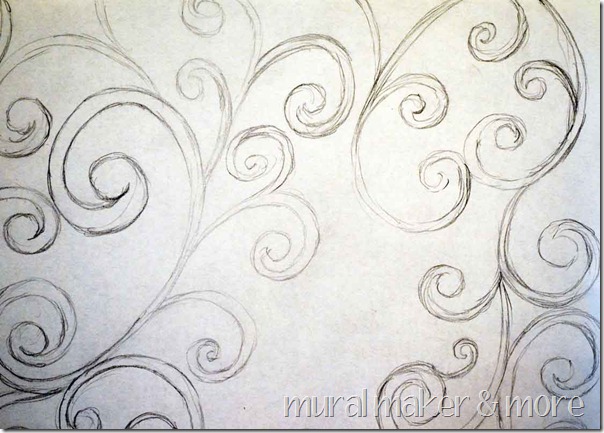 Of course, you could use a template of some sort to make your circles all perfect like, but I like just doodling. That, and I kinda like the imperfectness of them. “Imperfectness”? Is that even a word. 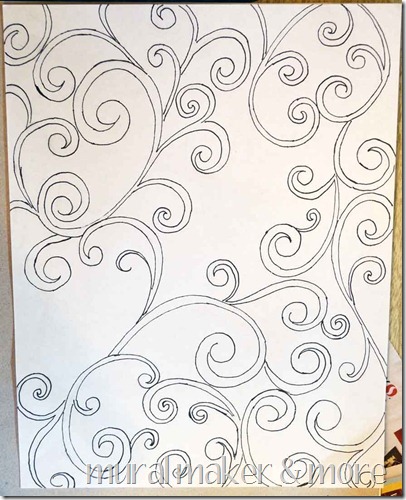 You get my drift.

Then I went over the pencil with a black felt pen. Just in case you ever want to paint scrolls and don’t feel like spending a few hours doodling, you can download my doodles scrolls. 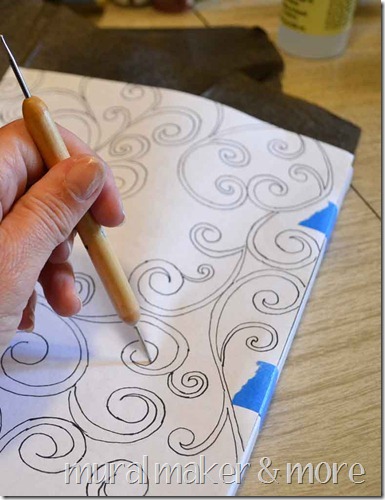 Then I taped the scrolls onto the now dry painted canvas and slipped some graphite paper in between. I used tape to prevent any slippage since I usually lose track of what I’ve transferred and what I haven’t and I wind up lifting the paper. Usually.

It happens. (You know what I’m really saying when I say “it happens”, don’t you? As in, insert “sh”. Yeah, I thought you knew.) 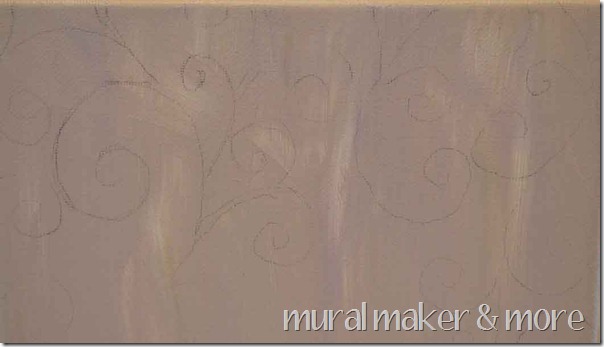 Okay, so I just transferred the basic scrolls, not the thickness part, only because I’m not so good at staying in the lines and I’d rather have fun letting the brush create the thickness. 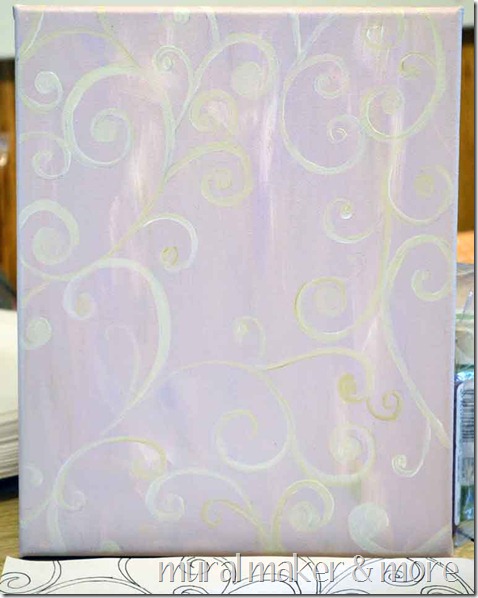 See? Now, before you ask how I got all of those shades, lemme show you something . . . 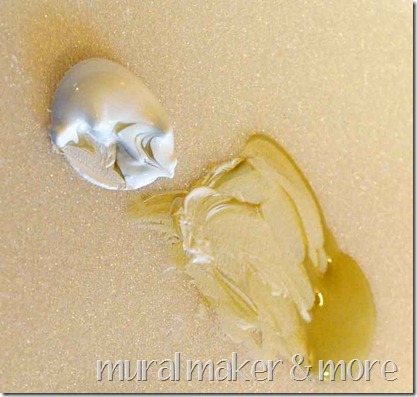 . . . it’s just white mixed with the tan-grey so it comes out different every time I load the brush. I don’t mix the two paints together on the palette – just pick up white, then tan, then put it on the canvas.

Before I forget, I use a round (pointed) brush for scrolls. Usually. Rounds are not my go-to brushes. As in, I hardly ever use them. I use flats (square) nearly all the time. Flats & liners.

For these scrolls the round worked really great though. You control the thickness of the line by the amount of pressure you apply to the brush. Light pressure = thin line; heavier pressure = thicker line.

Fun stuff. If you like to doodle and smoosh paint. Which I do. (Have you noticed?)

As a matter of fact I had so much fun I nearly forgot the shoes! 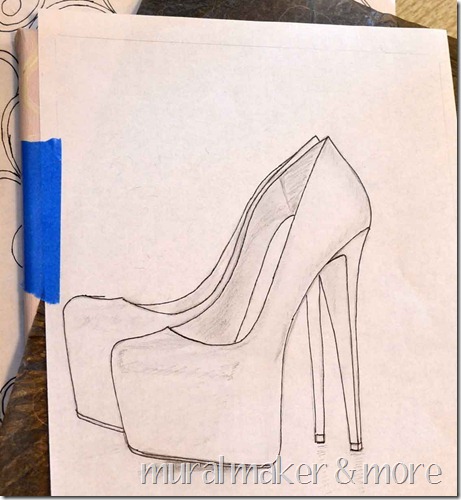 Oopsie-daisie! (I just love saying that ‘cause it was one of Hubs’ sayings 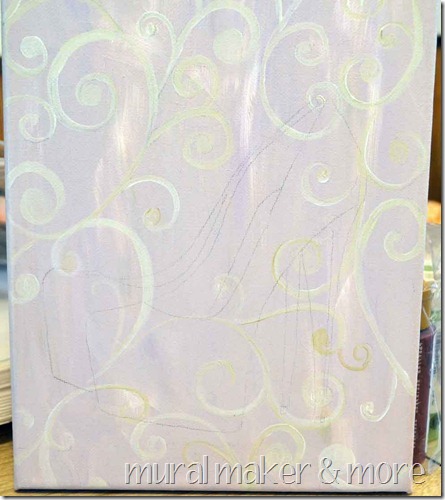 Not that it would’ve been a big deal, other than I would’ve spent a lot of unnecessary time shading & highlighting scrolls that would be covered up by the shoes. 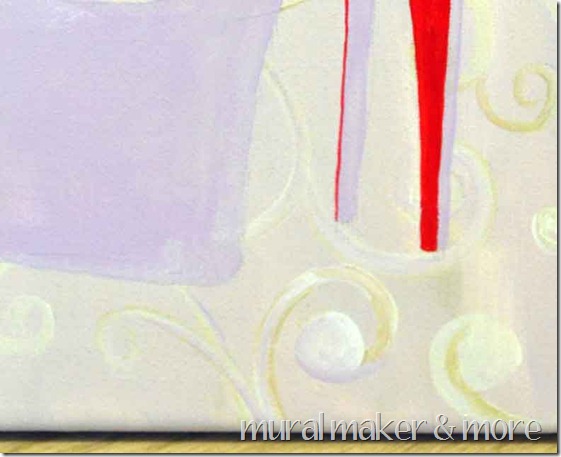 After I painted the shoes with one basecoat the color of the scrolls bothered me. I mean, I wanted the scrolls to be the background, not stand out too much. So I tried some lavender in the scrolls. Yeah. That works.

And that’s why I love paint/painting. Make a mistake and just paint over it. Too light? Darken it. Too dark? ? ? 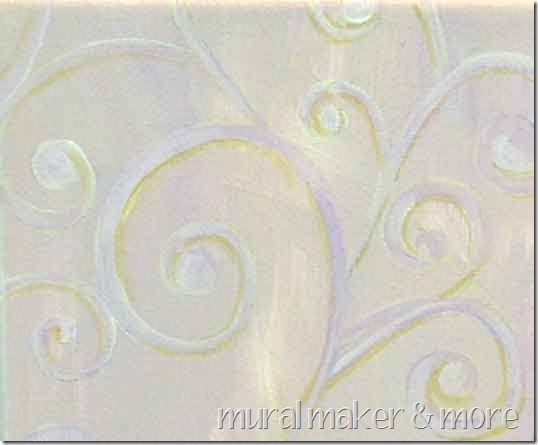 So I painted lavender over the scrolls, added some white here and there and shaded with the tan-grey. The scrolls are still a little too prominent but as the heels take shape, the background will be more in the . . . back.

Okay, so I realize this post basically doesn’t teach you anything, does it? I just wanted to say hi and since I haven’t finished the heels yet I figured I’d just talk about scrolls. They’re on my “make a video” list.

Seriously though, scrolls are a great way to practice painting highlights and shading. I used to paint by the hour, doing nothing else but highlighting and shading. It’s still my favorite part of any painting. It’s when it ‘comes to life’. Try it! Just remember to make them loose, not perfect. Although you could get a template to make them perfectly circular too. Or just use mine. Whatevs.

Of course, you could always find a piece of pretty scrapbook paper and Mod Podge it on the canvas.

But where’s the fun in that on a rainy summer day?

So how’s your week going? What are you up to this week? Are you layin’ back or jamming two weeks’ worth of projects in 4 days?