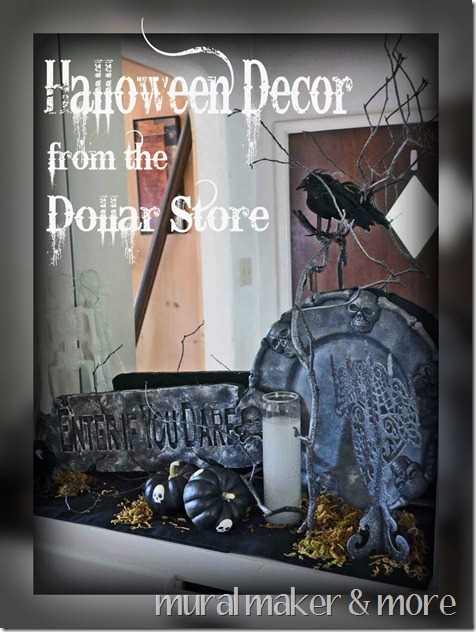 I mentioned the other day that I had decided NOT to decorate for Halloween this year . . . until I went to the Dollar Store. There’s just something about everything in a store costing a buck.

Tell me I’m not the only one who feels this way.

My thought process was I’d gather up some Halloween decorations for grandson at his mom’s house. I always have a thought ‘process’.

It rarely, if ever, proceeds according to plan.

It’s also rare that I see anything in any store, not just the Dollar Store, where I can’t see a little potential for just a little paint here & there. It’s bordering on a sickness, I tell ya. I’m serious. You should see my workshop, shelves brimming with thrift and dollar store items just waiting for ‘a little paint’.

Tell me I’m not the only one who has loads of unfinished projects.

Well, enough of that. Wanna see a few quick & easy projects that I actually finished with just paint I had in my stash. (Isn’t that the best? Sprucing up something cheap with left over craft stuff? I know!) All it took was a little bit of spray paint and a bit of craft paint.

First up, this styrofoam sign. Cute enough, right? They also have a bunch of tombstones. I managed to rein myself in with just this sign. Sure, I could’ve left it just like this . . . 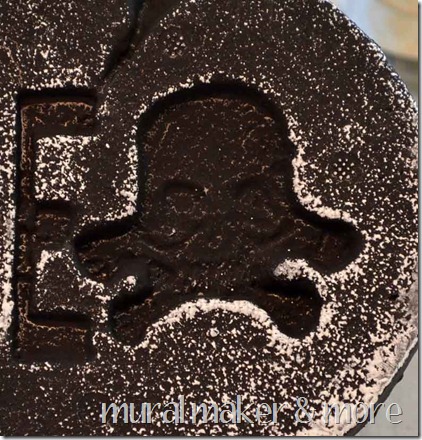 . . . but you can barely see the skull & crossbones. Grandson/five year old/lovesskulls. So I thought what I always think – Just Paint It!

Since the compressed foam had a really cool texture to it I simply dry brushed some light tan over all of it.

The cool thing about dry brushing is if you think you’ve added too much, just go over it with another color, similar to the basecoat – in this case medium grey – and it’ll just add extra texture. 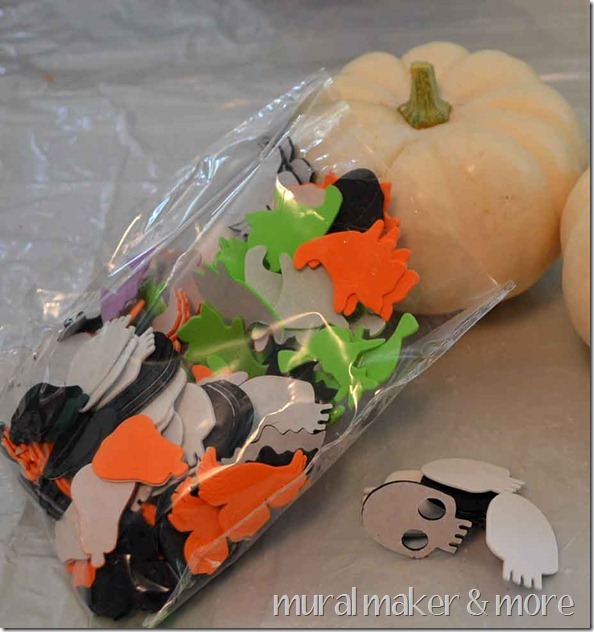 I snagged this bag of foam stickers for grandson to play with. There are plenty of stickers in it because I’ve already used some on the pumpkin backpack and now these little pumpkins. 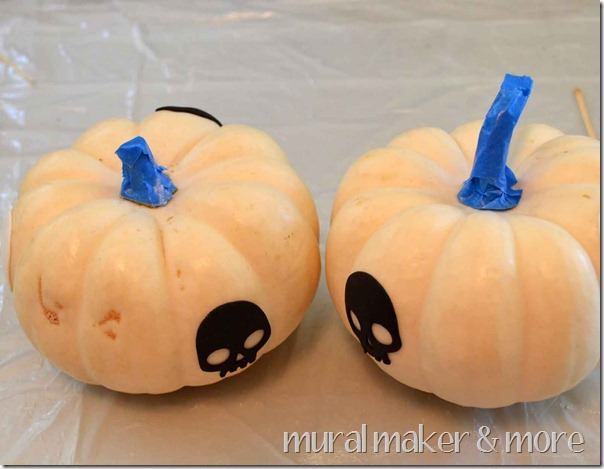 No, I didn’t get these mini pumpkins at the dollar store, but they do have pumpkins. Or at least they did last week. I threw on some skulls, taped off the stems and headed outside for some spray paint fun. 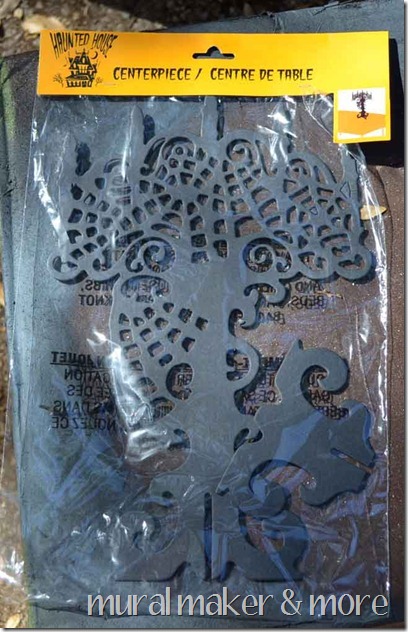 I have no idea why I bought this cardboard centerpiece. I didn’t know what I was gonna do with it. But it was gonna get a shot of paint, no matter what. 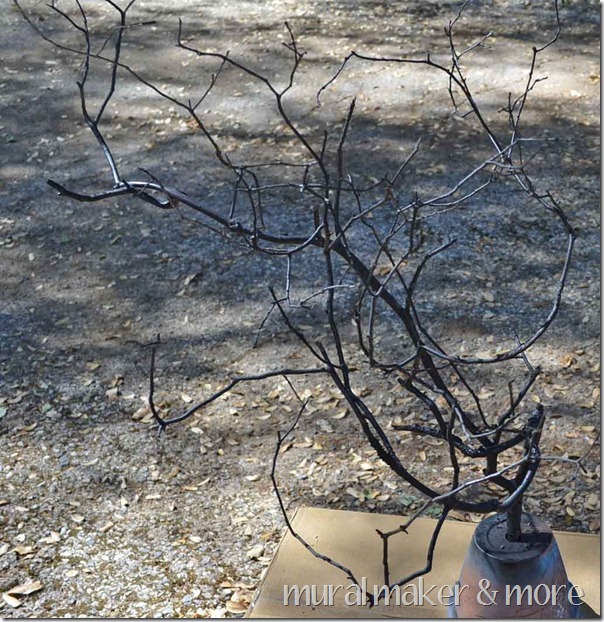 If you follow me on Instagram, you know I’ve been collecting branches for a while. These got a shot of black matte spray paint. (psst – don’t tell, but I used chalkboard paint left over from the marlin mirror. Chalkboard paint has a great matte finish when you want it.)

Then I went in a totally different direction then matte. I’ve been known to do that from time to time. I had a can of Krylon’s Glitter Blast in Starry Night and had been waiting to try it.

When they say “blast” they mean it, k? Awesome stuff when you want glitter.

After a little spray paint, a little dry brushing, the dilemma – where to put all of this stuff? I mean, Halloween or Fall? Fall or Halloween? Or maybe Fall, then Halloween, then Fall? pffttt. When you blog, you just gotta pick a spot, throw it up there, take a bunch of photos and, well, here I am. 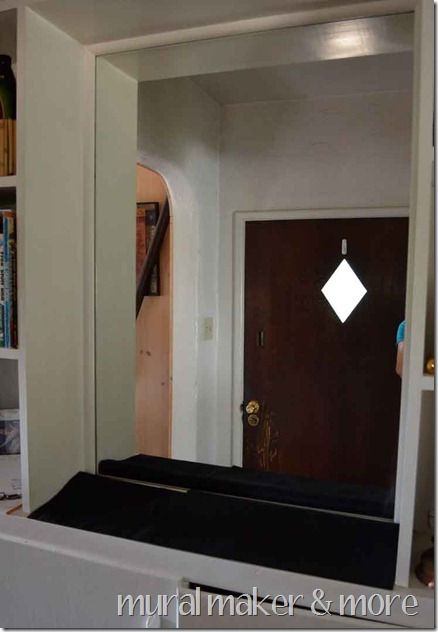 This is my ‘spot’. Why, I don’t know. It’s our entry. Hard to photograph because of the mirror, hard to light, but a focal point of the house.

I almost always use fabric of some sort. It adds color and texture. In this case, I laid down two black fabric placemats from the Dollar Store. Not painted. Yet. 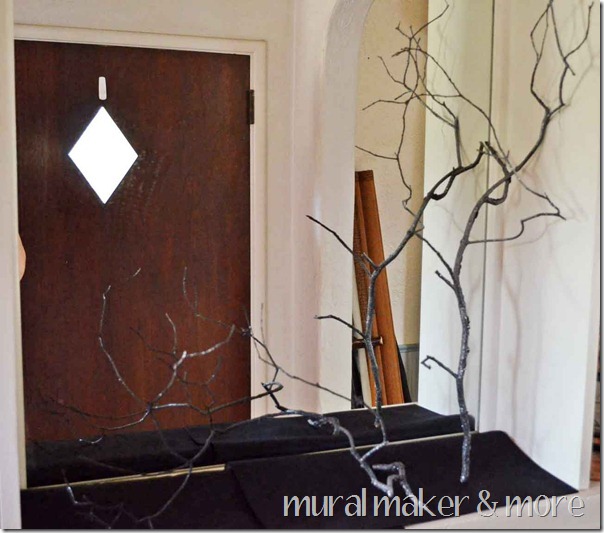 I always start with the tallest element, in this case the branch. I split it into two pieces so I could have a horizontal piece too. 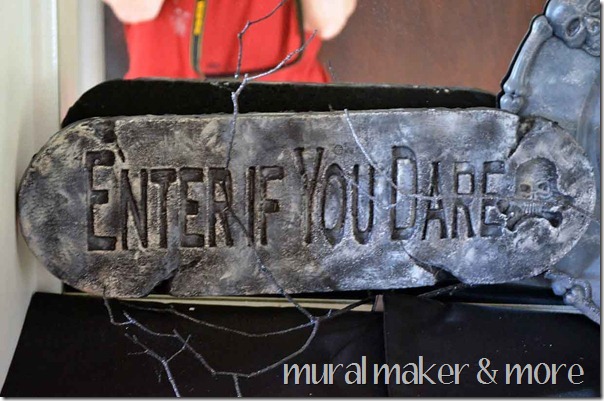 The horizontal branch worked nicely as a brace for the foam sign. 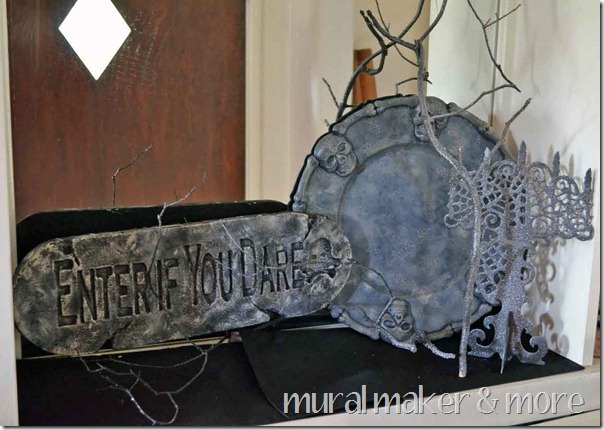 Next came the faux stone skeleton platter, resting against the mirror, behind the branch. I just wedged the oak branch in there and worked around it, which is what you gotta do with natural elements. In front of that, the glittered chandy. 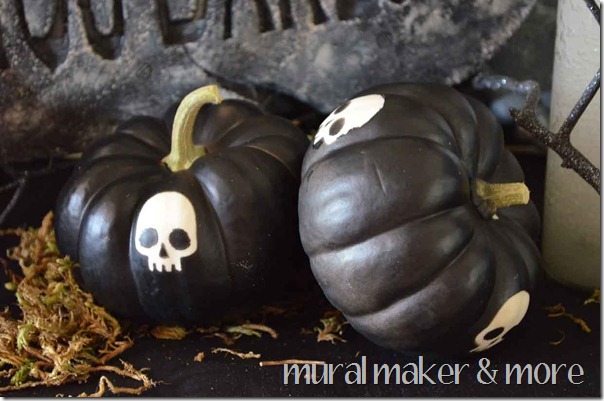 Remember the white pumpkins? They got a shot of chalkboard paint too. Simple and cute. 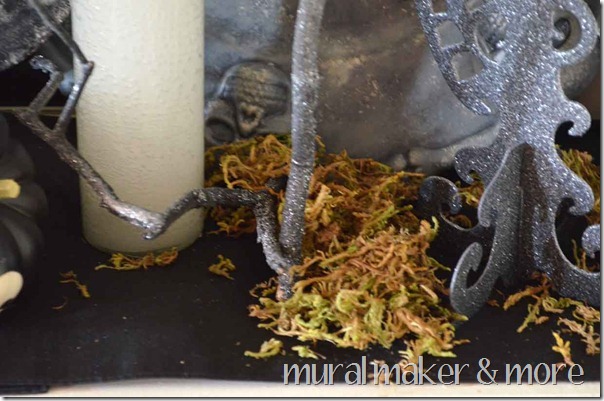 When I do a little vignette like this, I focus on two things – scale and texture. The scale of the items give the balance but fabric, glitter, etc., add texture. With all black and glitter, a little green moss was the perfect counterpoint. Plus it hides the raw end of the oak branch. 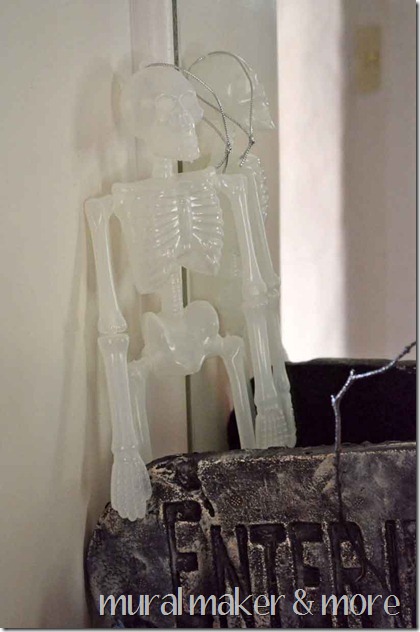 This glow-in-the-dark skeleton was added just ‘cause. You know? No reason. Just because I had him. 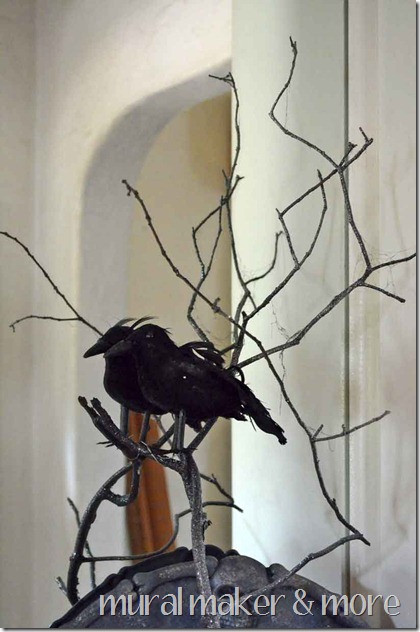 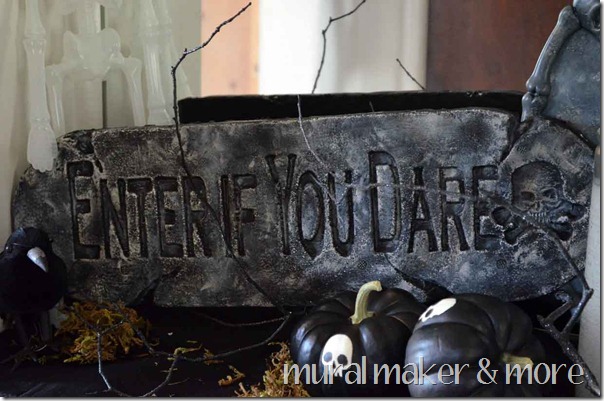 Another one in front of the sign. See how the skull and crossbones shows up better now with a little paint? 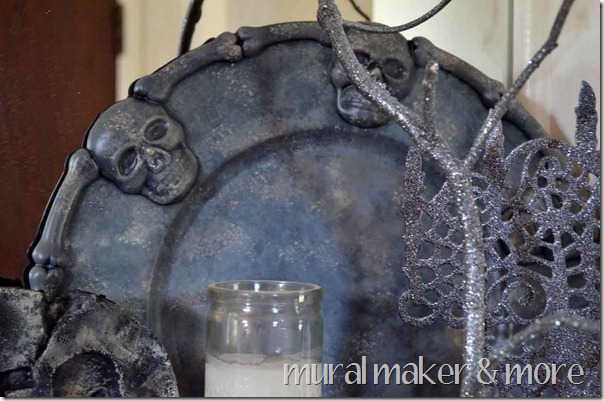 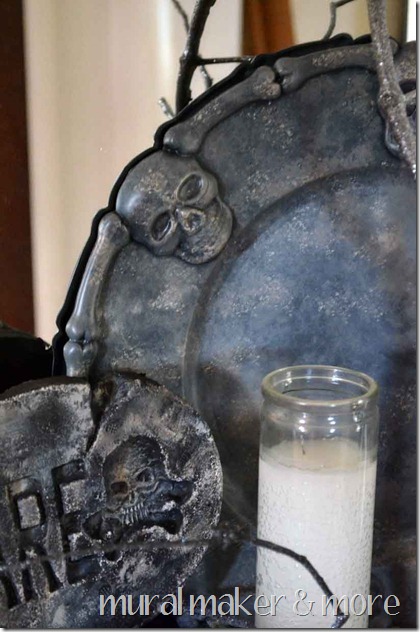 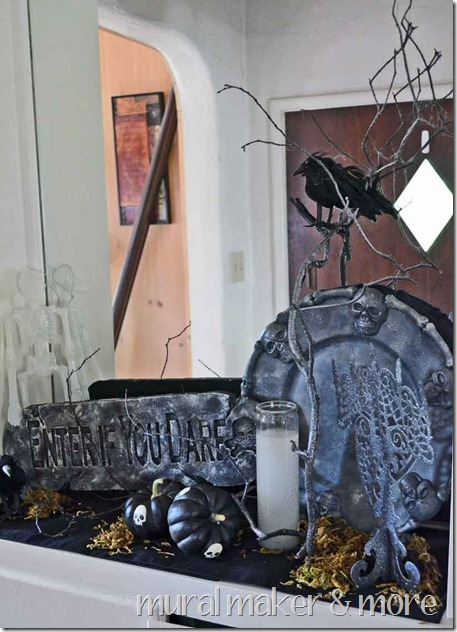 Not bad for a few bucks, huh? Creepy, but not too creepy.

Do you decorate for Halloween? Do you go all out or just a few touches? When do you start putting the decorations out?

I’m linking up to Layla’s It’s Fall Y’All party. No this isn’t a tablescape but it’s as close as I got right now. You just gotta check out her party, ok? So many creative tablescapes! 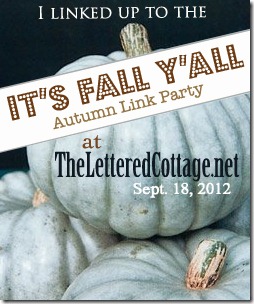