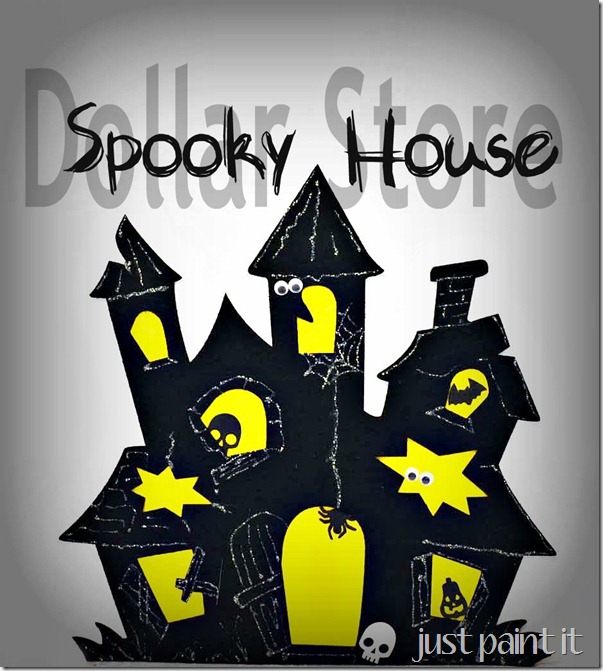 Last month when I went on a buying rampage bought a few things at the dollar store, I picked up a felt haunted house. With absolutely no idea what I was gonna do with it.

But, hey, it was only a dollar.

(I was totally gonna say ‘you feel me’ but I’ve been trying to act my age. Ha. That’s a joke. I’ll never act my age.) 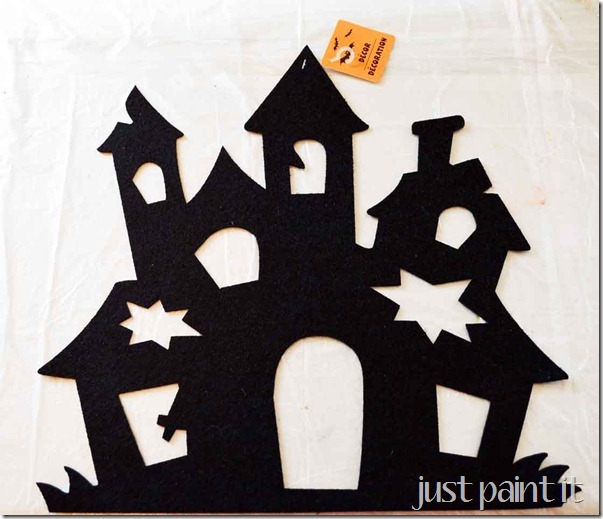 Just a plain ol’ piece of black felt. I thought I might use it for a Countdown Calendar but it wasn’t big enough. 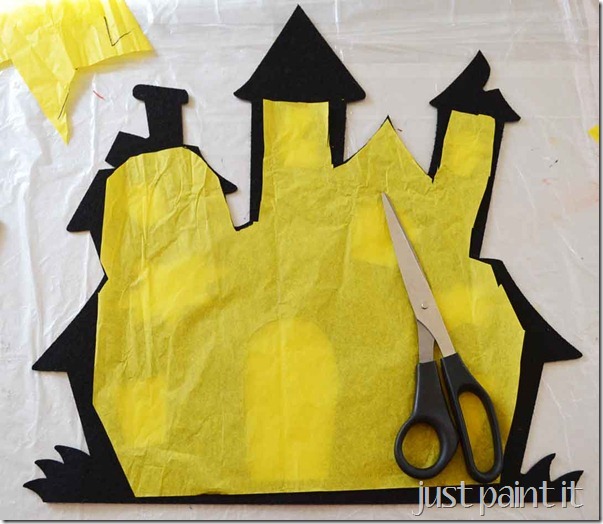 Since the windows were already cut out, maybe some yellow tissue paper to make it look like the lights are on? 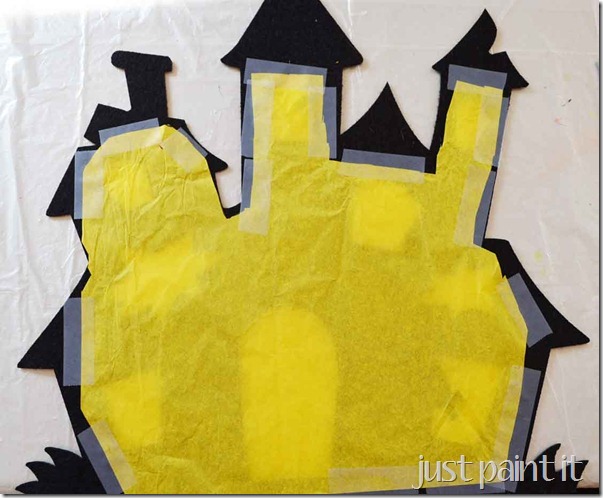 Also, because it was only a piece of felt and it only cost a buck, I didn’t want to spend a lot of time, or effort, making . . . whatever it was I was making.

At this point I had no idea.

Maybe I could cut out some black silhouette shapes for the windows? Itsy bitsy shapes. Huh-uh. 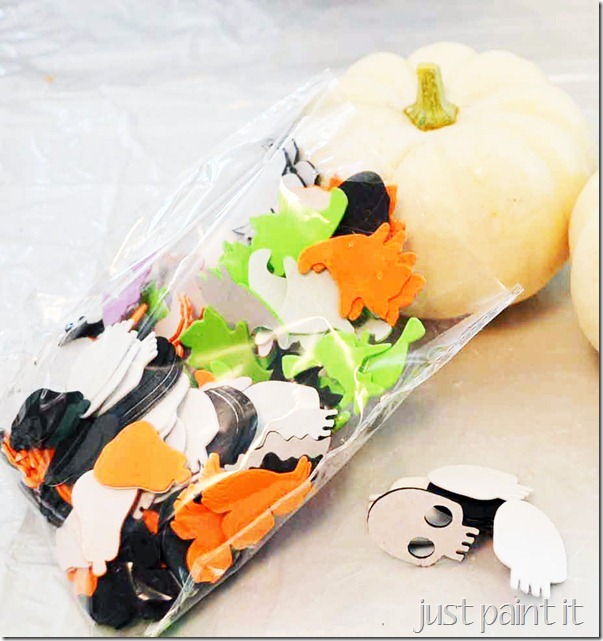 This bottomless bag of dollar store foam stickers I used on the black pumpkins and the pumpkin tote bag is perfect. 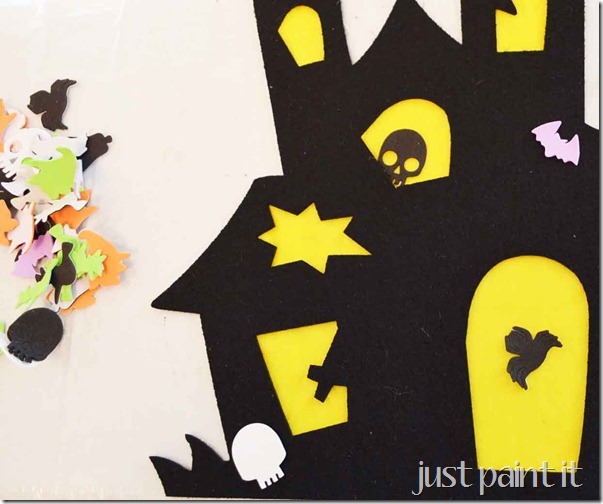 I thought about waiting for Santino later this week so he could put the stickers on – *Kids Craft Alert* – but I kinda got caught up in the moment.

And did I mention that the felt house was only a buck? I’ll buy him his own to decorate.

But it needed something besides stickers. *fingers drumming 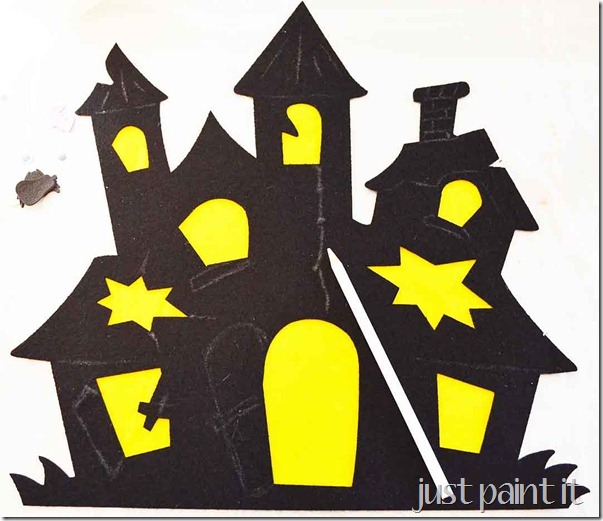 Ok. Glitter paint, but where? I grabbed a white pencil (chalk would work too), and played around a bit. 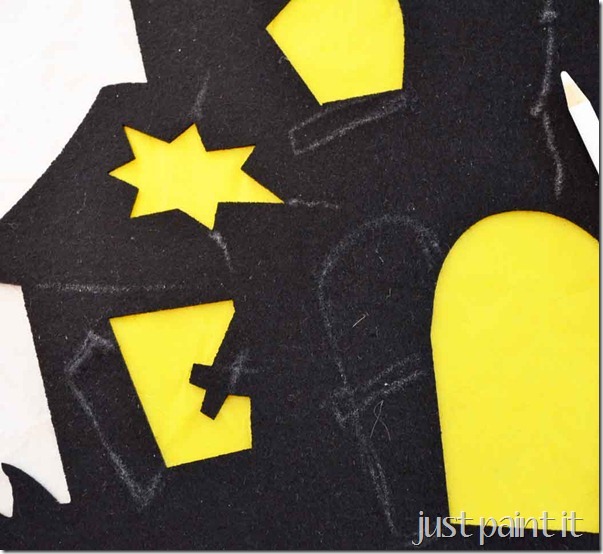 A little door, shutter, some rooflines here and there. 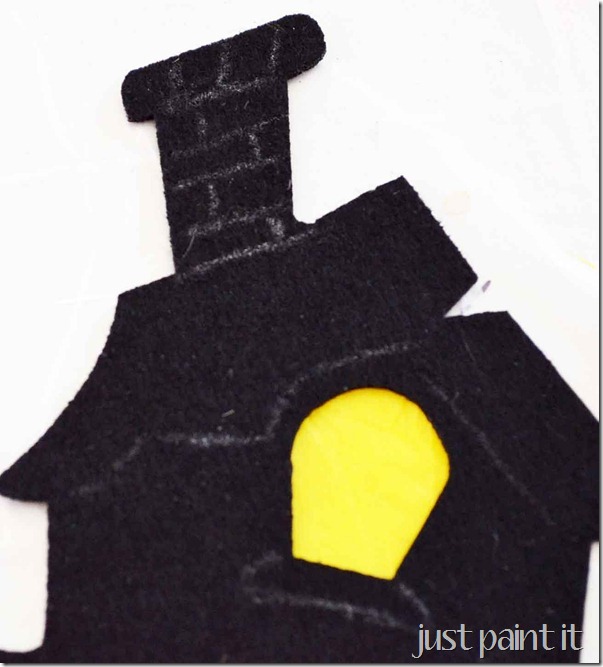 And some bricks on the chimney. That oughta do it. 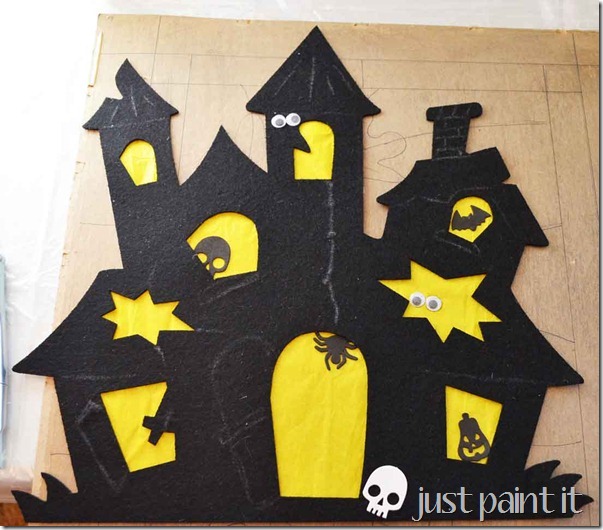 Did I mention googily eyes? Or is it googly. Or googley. 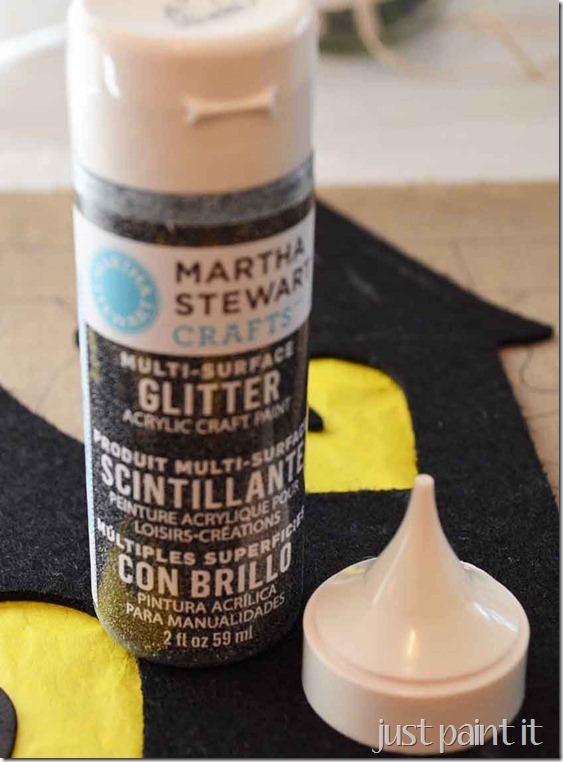 I already had the glitter paint in my stash. It’s by Martha Stewart and I love it. For a lot of reasons but in this case because I can screw on this pour spout thingie and have a paint writer. (Puffy paint would work too.) 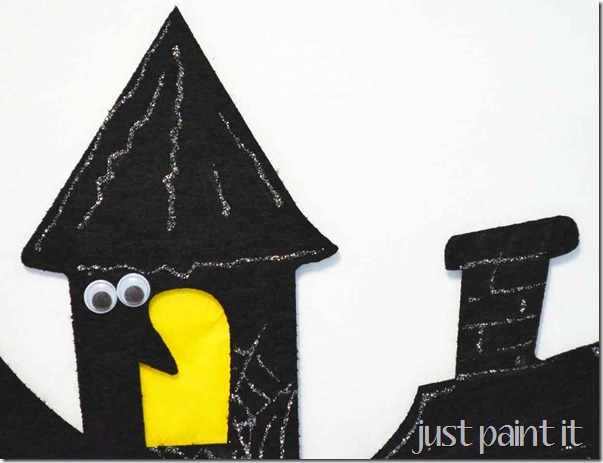 A few squiggles here and there. 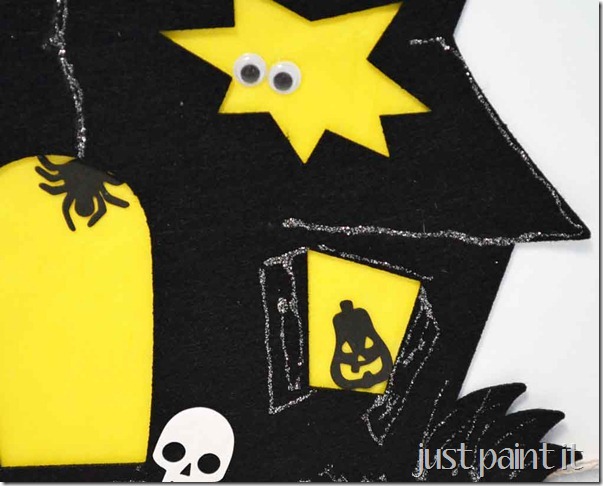 Outline the roof. Some cockeyed shutters. 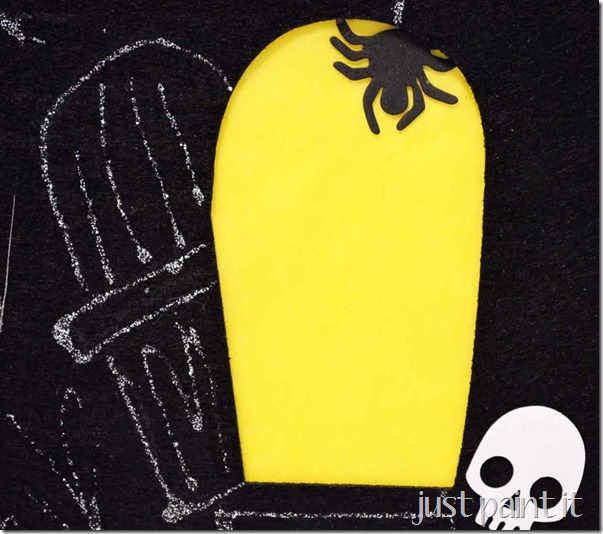 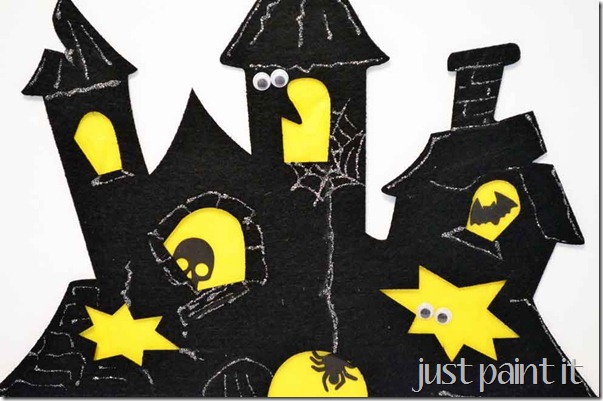 And my favorite – a spiderweb with a dangling spider. 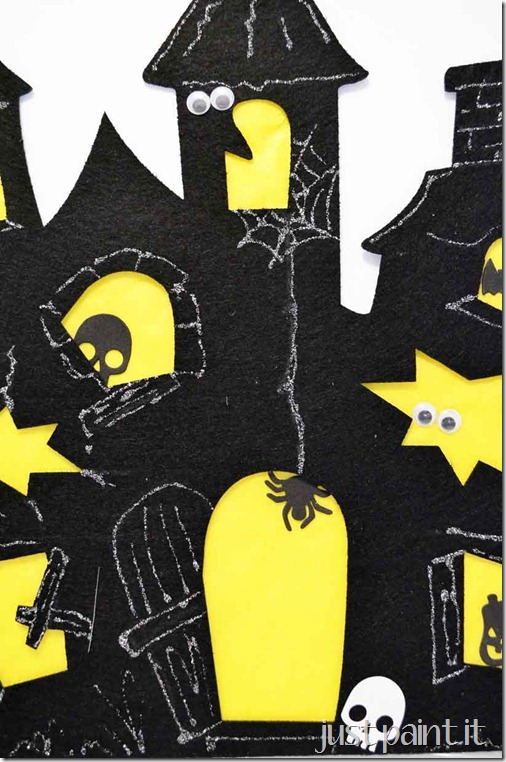 Which totally inspired yet another dollar store project. But that one is still drying so I’ll post that later. 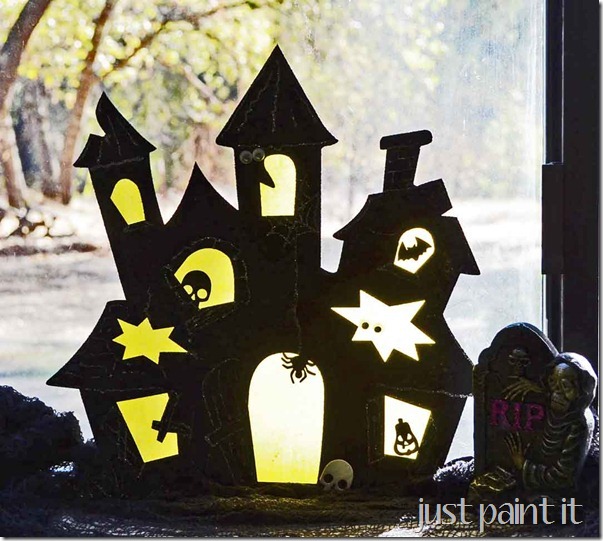 Is it as cute as a dollar store felt house with foam stickers, googley eyes and glitter paint? 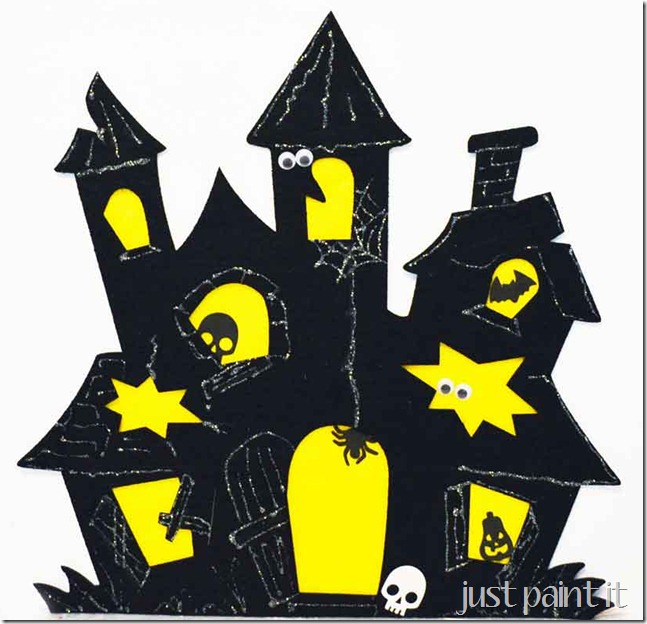 I’ll let you be the judge.

I’m just a happy li’l camper with my dollar store decorations. There’s something so . . . so, what? Freeing? Relaxed? I dunno, but playing around with stuff that only costs a dollar is really, really fun.

C’mon, you know you wanna try some stuff, don’t you? Or have you been playing already? Tell me. Tell me! Inquiring minds . . .