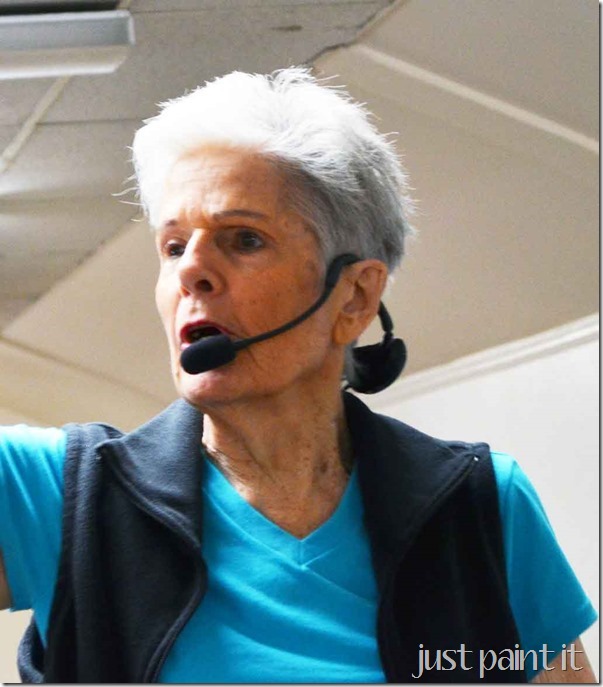 I wanted to take a few minutes to tell you about my fantastic mother who turned 85 yesterday.

She looks amazing, doesn’t she? But there’s a lot more than her looks that make her amazing. Did you notice the headset she’s wearing in the pic above? There’s a good reason . . . 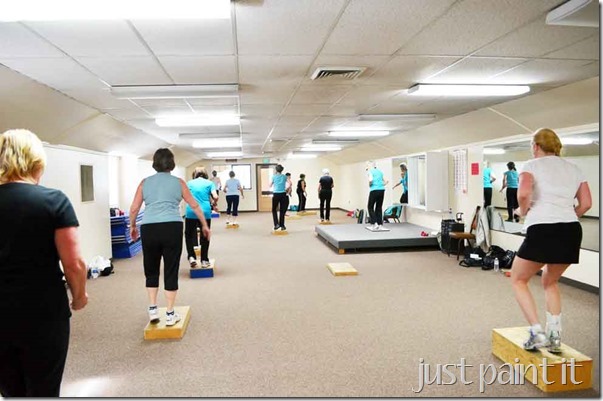 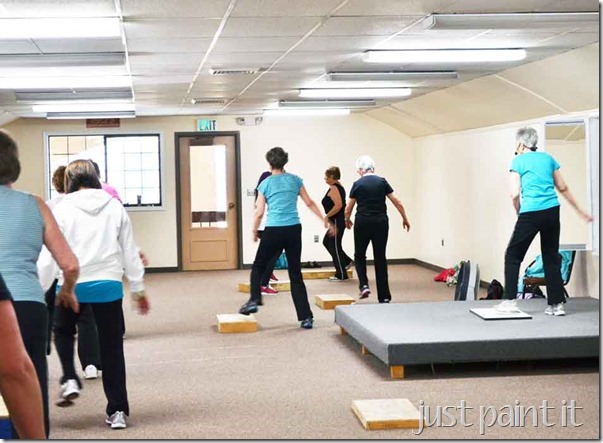 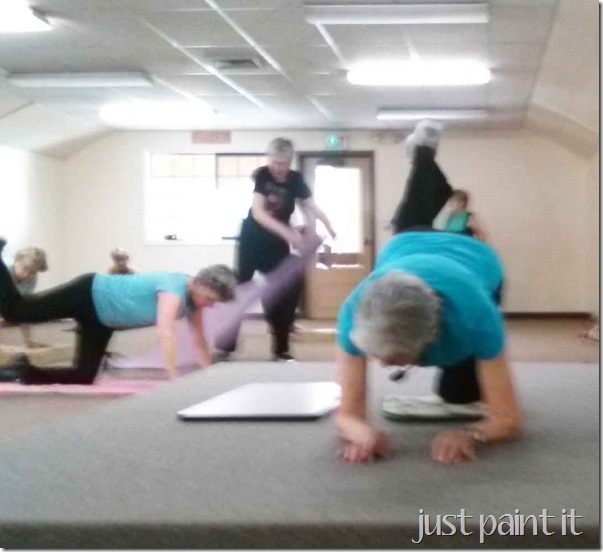 I’m not talking ‘senior’ stuff either. The class is open to anyone over age 16. And from time to time we do get some teenagers in class. It’s pretty fun watching them trying to keep up with Mom.

Yeah, you could say I’m pretty proud of my mother. Proud. Inspired. Encouraged.

I could go on and on.

It’s not just her age that makes it so amazing that she is still teaching fitness. She has been battling non-Hodgkin’s Lymphoma for the past 4 years. Then two months ago she was hit with a diagnosis of breast cancer.

And she continues to teach. Not only teach – she also mixes her own music and choreographs the routines.

Now, you might be thinking this is something she’s been doing her entire life, but it’s not. She started working out with Jazzercise when she was 50. Prior to that she wasn’t all that active. Well, except for running the family resort business and raising 5 kids. I mean ‘active’ as in exercise as an adult. 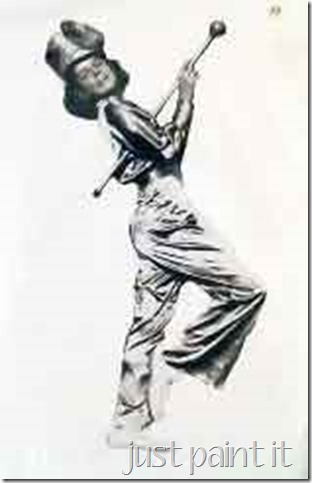 As a child, however, she was very active. As a drum majorette, she led parades up and down the streets of Anaheim & Long Beach in Southern California. A ballerina who was en pointe (in toe shoes) at the tender age of 3. (That’s no longer done, btw. I think the youngest anyone is en pointe nowadays is age 8 or so.)

I could go on and on. She was Honored Queen in Job’s Daughters, president of GAA (Girls Athletic Association) in high school. She acted in school plays, sang in operettas . . . she was a busy girl.

I think that is what inspires me the most – Mom didn’t just sit at home and let time pass by. She went out, found Jazzercise, and from there developed her own classes that are easier on backs & knees.

Yes, that’s definitely what inspires me – she created an entirely new life for herself. Something that I’m trying to do since the loss of my husband last year.

While others at her age have ‘retired’ and enjoy sedentary hobbies, Mom is surrounded with her aerobics students, who love her. 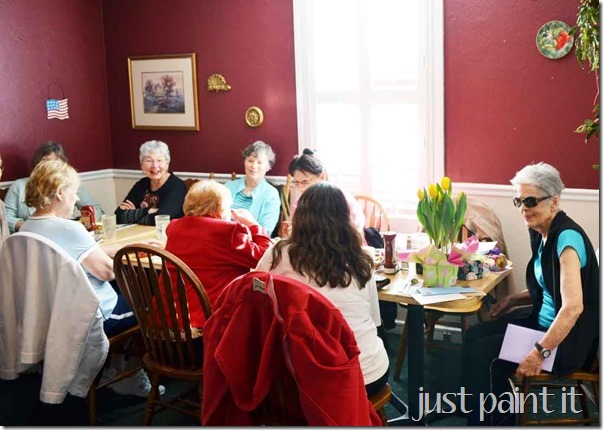 Ladies that get together to celebrate her birthday every year, after aerobics class. 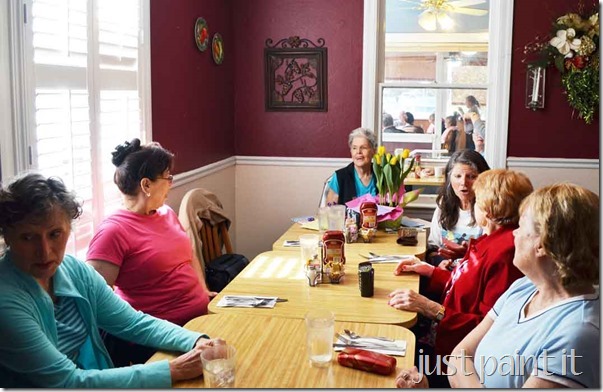 Aerobics students that have become dear friends to both Mom and me. 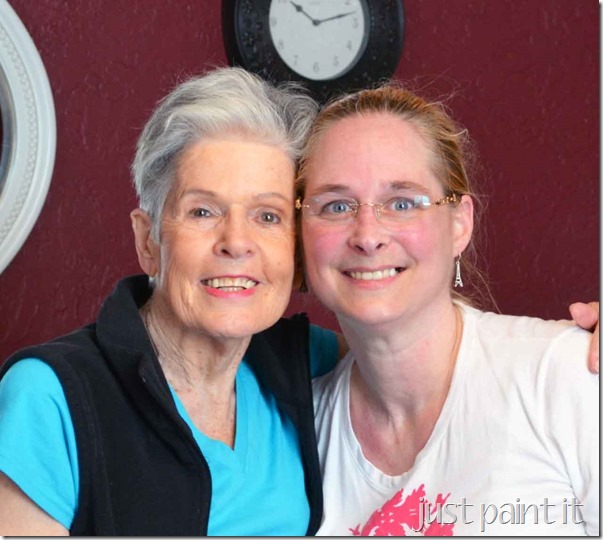 Gals who once brought their babies into aerobics class who are now are dropped off by those same ‘babies’ that are in high school and driving.

We live in a small town in Northern California, but it still amuses me whenever we go somewhere and we inevitably run into someone who has been in Mom’s class over the years.

Now I know how hard it is to rebuild your life, which makes me even more proud of what Mom does and what she has accomplished. And I’m so grateful for those gals who show their appreciation every year on her birthday. 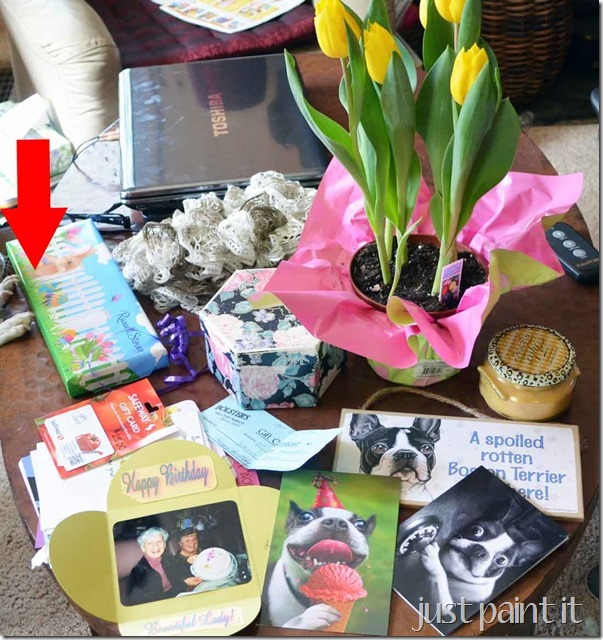 They know her well, as evidenced by this array of cards & gifts. Notice any theme here?

The little white paws under the big red arrow is a clue. 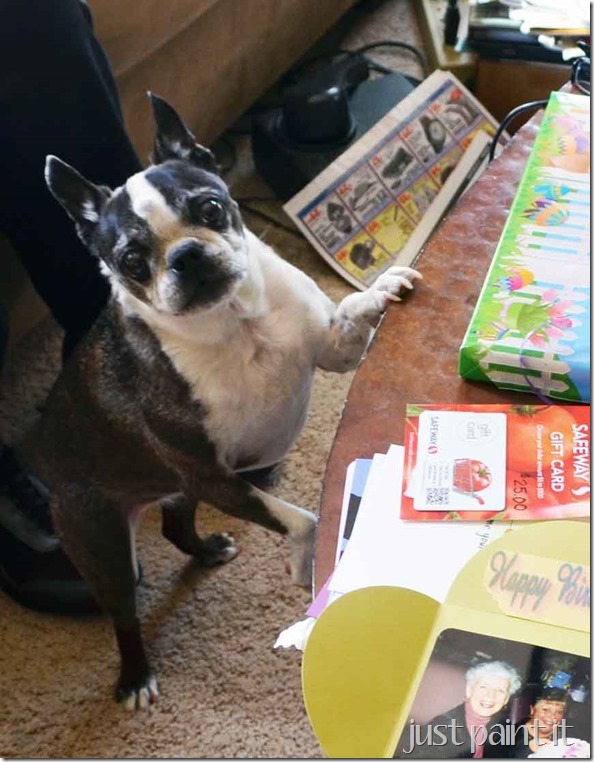 Meet Sadie, my mom’s other passion. This little Boston Terror Terrier has had Mom’s heart for the past 11 years.

I have to laugh when I think how Mom decided upon a Boston. My dad had died two years prior and she was lonely. She actually wanted a Yorkie. One day, Mom, Marlon & I were in a pet store and a little Boston was running around the store.

One look at my mother’s face and I knew that a black & white pointy-eared Boston was the furthest thing from her mind. But she didn’t say anything, as not to hurt Marlon’s feelings.

A few weeks later she called to tell us she had a tiny black & white non-pointy-eared puppy named “Sadie”. (Their ears don’t point until they’re older.)Marlon smiled with just a hint of smugness. Mom was thrilled. I just shook my head.

I don’t know how or why he knew, but he did. Boston Terriers are amazing, personality-filled dogs. There’s never a dull moment with Sadie around.

Or with Mom, for that matter. When I come downstairs on a break from painting I might see Mom’s head boppin’ to some 70’s funk while she choreographs a new step routine. Although it could be country music too. Or maybe even ‘Everybody’s Hustlin’.

She’s a widow, has cancer, is at an age that most would consider “old”, but none of those things stop her from doing what she loves to do.

Those days when I don’t feel like ‘rebuilding my life’ or ‘moving forward’ I don’t have far to look for inspiration. I’m a very lucky girl to not only have a mother that inspires me, but also my best friend.