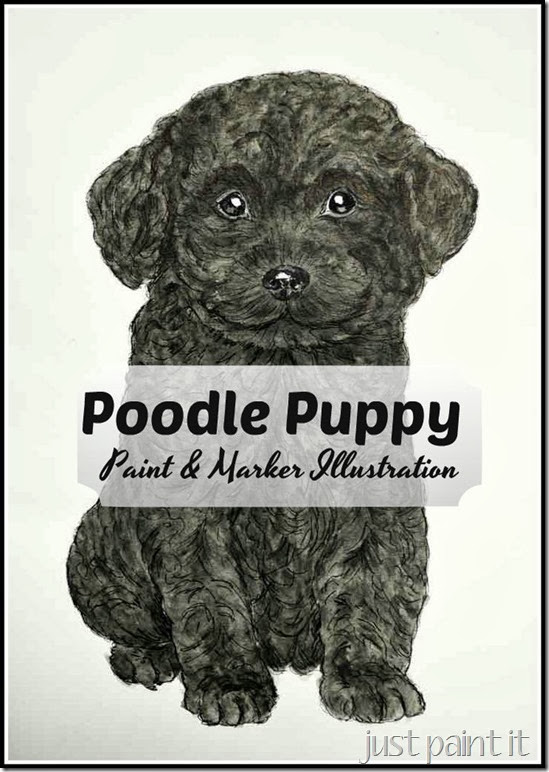 Since I’ve been doing dog illustrations recently I’ve had no shortage of requests from friends and followers. Which I love, because there are times that I simply don’t feel like painting.

It’s rare, but it does happen when I just don’t feel like creating anything. This poor pup got caught in the middle of one of those dry spells.

When I started him, all systems were go and I thought I’d knock him out in a couple hours, or a day at the longest.

Then my brother got sick. Really, really sick. Me, being his “little sister” – yes, even in our 50’s and 60’s we still see each other as if we were kids – I’ve been the one to make sure things stay on track. At the hospital. With the paperwork. With his bills. Stuff that a little sister would want to do.

What I wasn’t prepared for was the emotional upheaval that goes along with a sibling being seriously ill. I mean, he’s been sick for a long, long time but once I got him to the hospital and the diagnoses started pouring in, all of those what-if’s became reality.

Painting a poodle pup just didn’t seem important to me.

Turns out, I was wrong.

Painting, for me at least, is very important. Always.

It calms my nerves. It helps me to focus on something other than not-so-nice what-if’s.

And if I let it, it can make me happy.

Maybe for only a minute. Maybe for an hour. But life is a series of minutes and hours and grabbing whatever happy minutes we can is good. Great, really.

This painting wound up taking a lot longer than I thought it would but I’m glad it did. In the midst of a lot of stress and worry, forcing myself to paint this pup allowed me to breathe, focus, and grab some of those happy minutes. 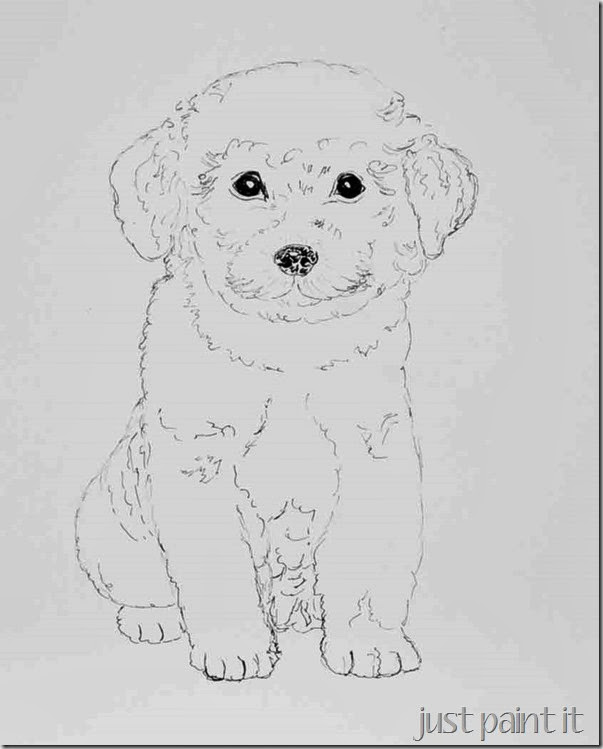 The basic sketch was promising.

My plan was to do a watercolor effect, detailing with markers, rather than layer upon layer of acrylic paint.

I thought this would go faster. 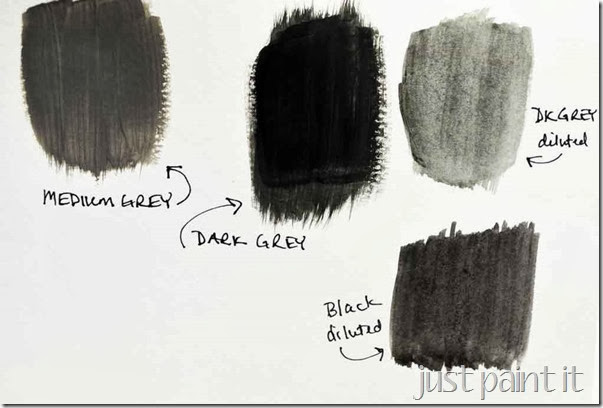 To get the right shade of black I did a lot of testing.

Rather than using the obvious black, I went with a dark grey – Wrought Iron by Folk Art. It’s almost black but allows a smidgen of light. 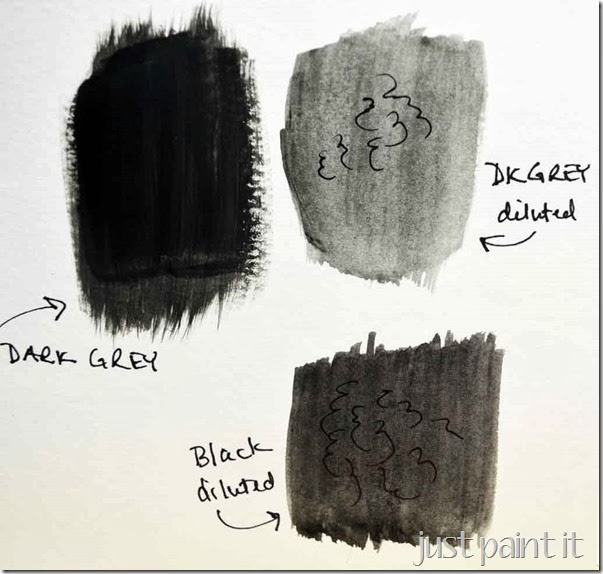 I had planned on a regular fine tip Sharpie for detailing, thinking I’d do just a few layers with paint. 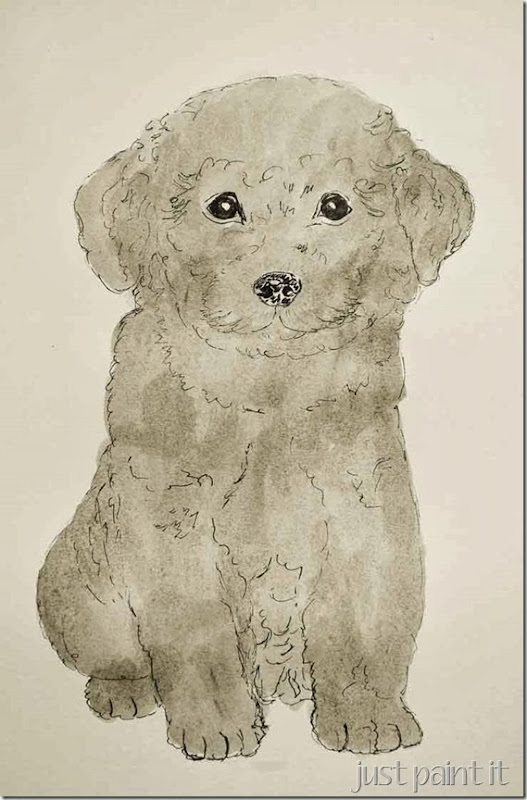 Perhaps I was a little too cautious in the beginning and diluted the paint more than it needed. 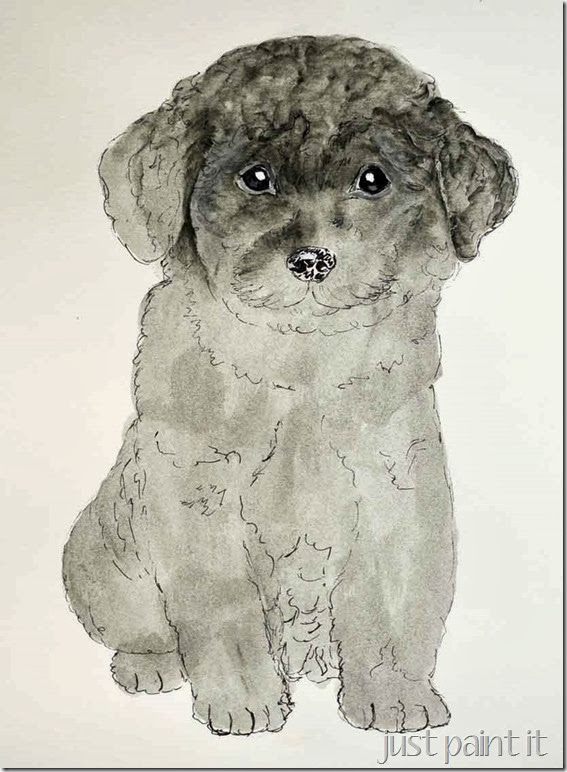 Throwing caution to the wind, I decreased the water and went for it, making little squiggles and “C” strokes with the dark grey. 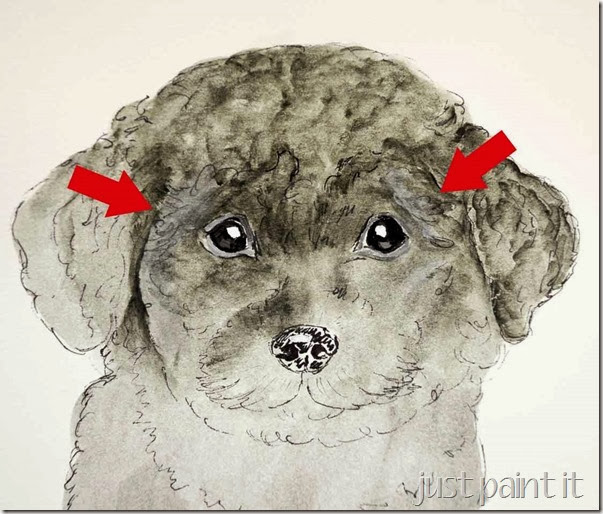 Since I’m not a watercolorist, nor ever taken a class, I don’t know how they get white into their paintings.

I tried adding some for highlights, like I do with regular acrylics.

Um . . . no. It wound up looking cloudy instead of highlighted. 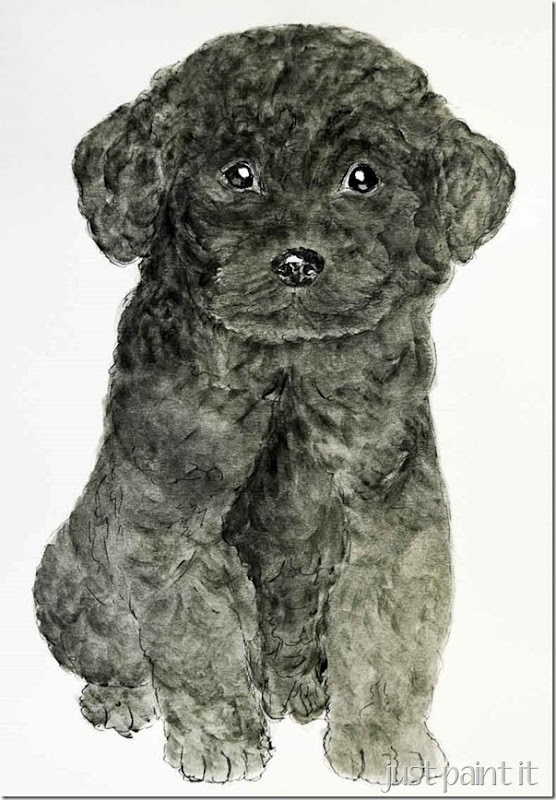 Covering up the white meant I was going to have to go a lot darker than I’d intended. 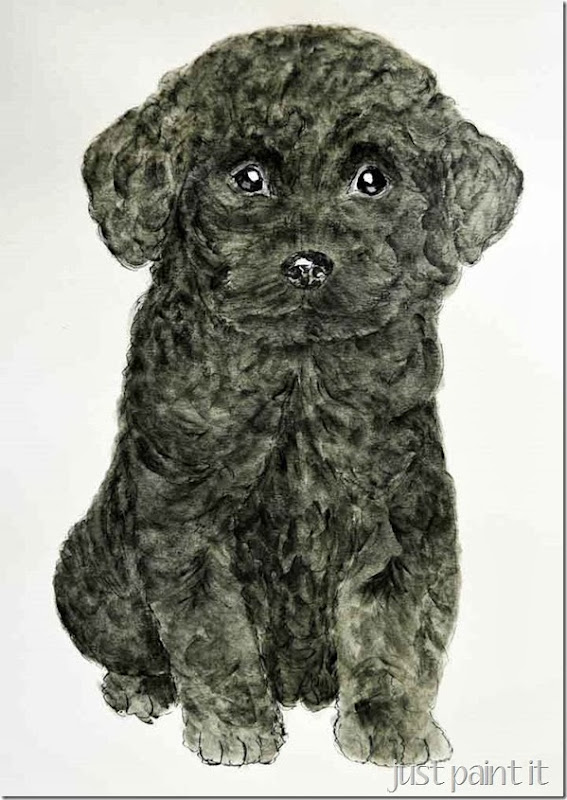 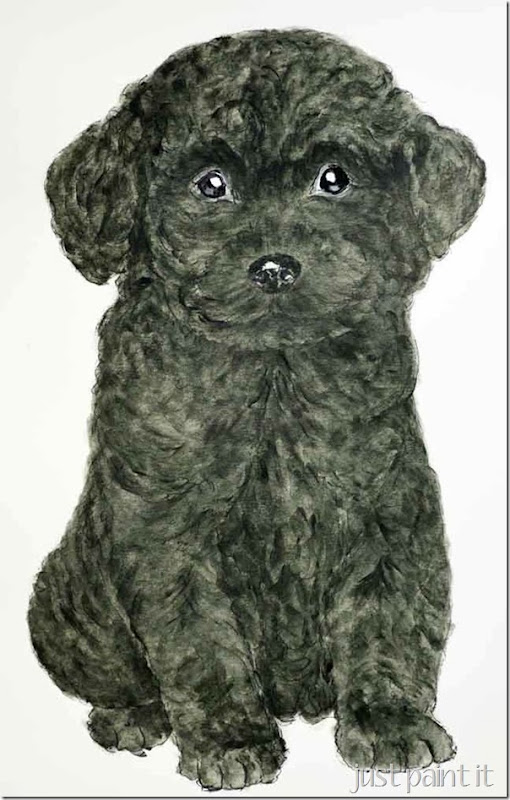 And darker . . . until I finally said Enough.

I could easily still be working on this l’il guy but I decided I really wasn’t making any progress with the layers at this point.

I wanted it to be done.

Ever felt that way about a project? Like, you know it could use more work but you’re just over it. Totally? 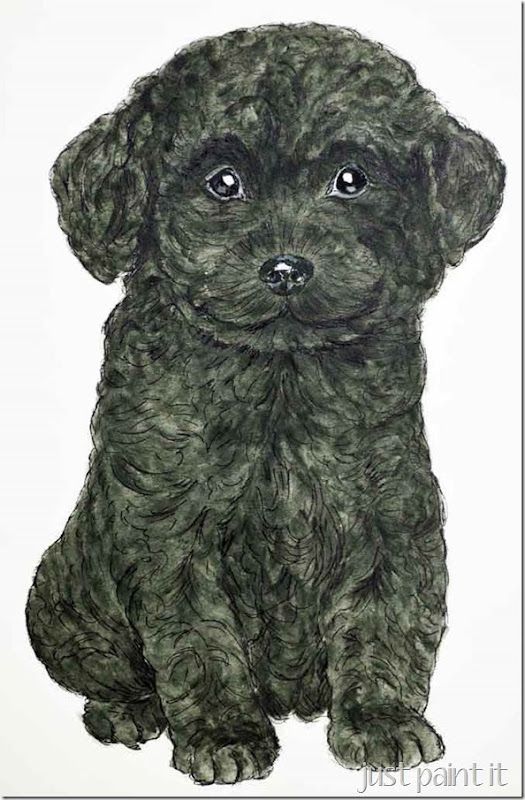 So I grabbed my fine tip Sharpie and went to town. 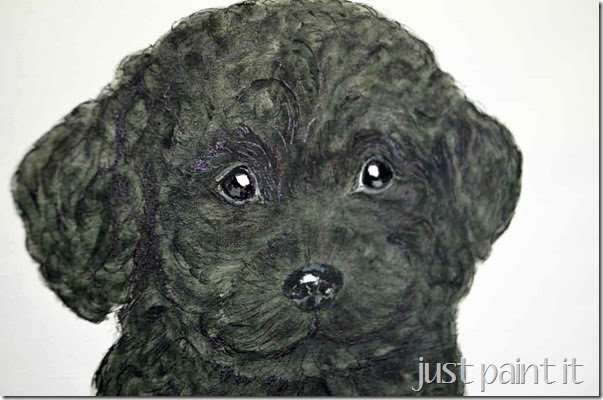 Squiggles that apparently are reflected when I turn on my new photography lights.

More on those later. 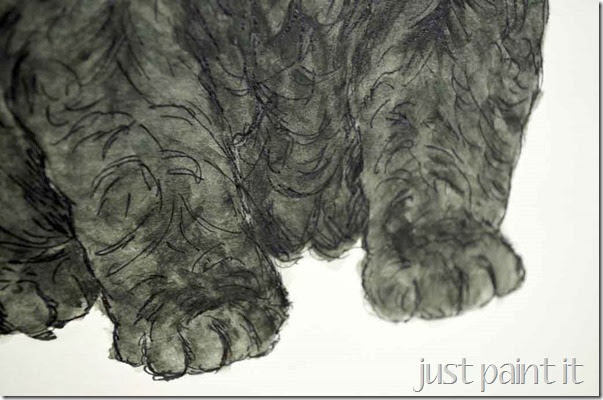 If you ever need a mindless activity, grab a Sharpie and detail a poodle’s curls. 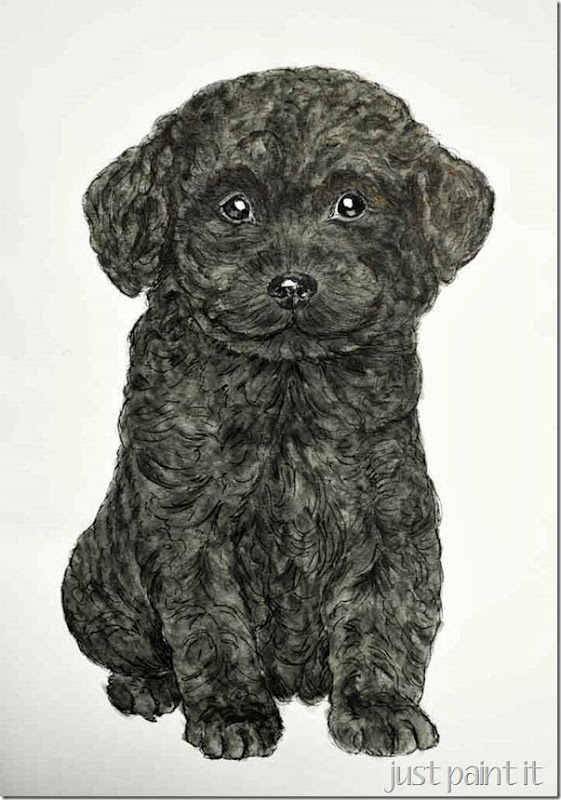 And with my brand new photography lights and my attempts to use my camera in manual mode, I had to go back to auto/no-lights so the marker wouldn’t be reflected.

One step forward, two steps back.

The same with my brother, by the way. He’s “holding his own”, still in the hospital, tired of feeling crappy, but not ready to come home.

Which means I’ll be starting another painting. Soon. Like today.

Because even though he’s out of the woods, little sisters never stop worrying about their big brothers.

What do you do to cope when you’re worried? Paint? Knit? Doodle poodle curls?