It’s true, isn’t it? You’ll never know what you’re gonna get when you have a dog. Except for one thing . . . 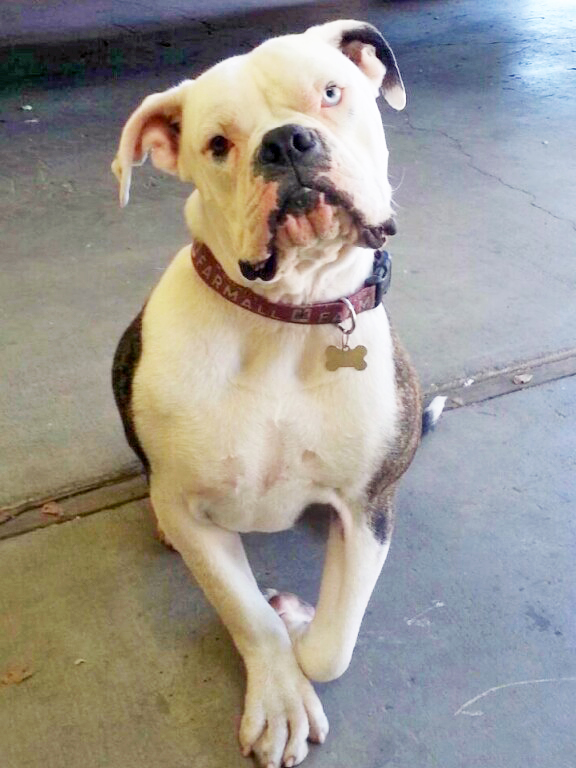 Even bulldogs with one brown eye and one blue eye. 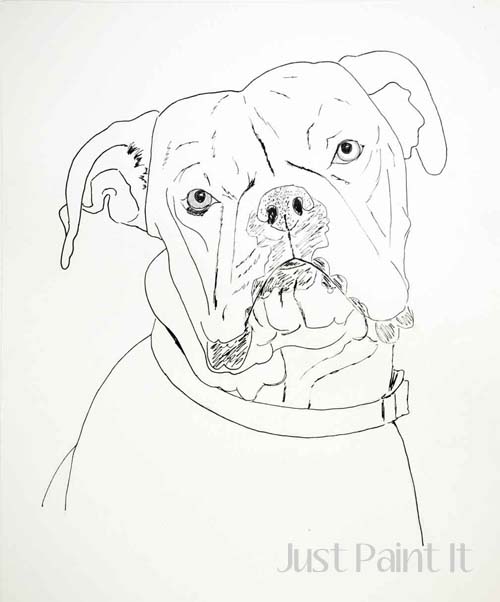 And a very wrinkly chin.

I first met this particular bulldog a little over a year ago when his mama threw a party for Mom’s birthday. All the gals from our step aerobics class were there and Adella explained that they were keeping the dog temporarily.

He had lots of physical problems. I can’t recall exactly how he came to be at their home but I know they’re dog lovers and were caring for him until a forever home was found.

Somewhere along the line, they adopted each other. 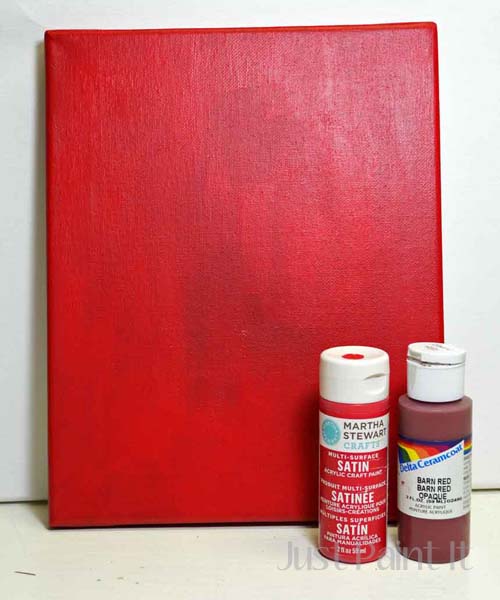 When Adella found out I was painting pet portraits, she asked if I’d paint this guy.

She didn’t have to ask me twice.

Her house is decorated somewhere between cowboy and country with loads of red accents so the background had to be red.

As I mentioned before in this post I’d decided to use artist acrylics from now on. Like a big girl.

I had some already that were who-knows-how-old and, while I thought they’d probably be fine, I picked up a starter set too along with a plastic palette. 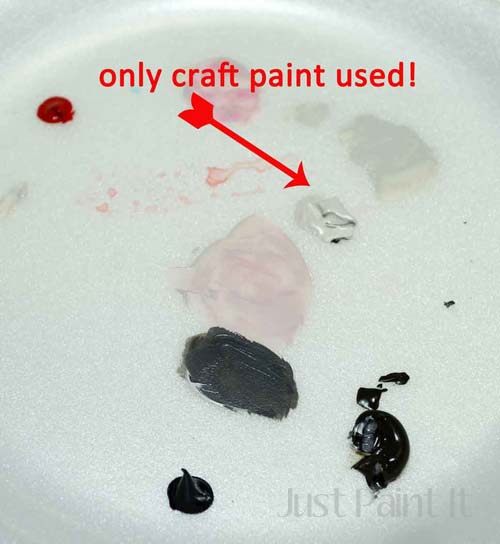 If you use acrylics – either tube or craft – don’t waste your money on a plastic palette. You don’t need it, it doesn’t keep the paint moist any longer than a foam plate, and it’s a pain in the you-know-what to clean.

Of course, if you’re using watercolors, that’s a different story. By all means use a plastic palette for them because you can add a little water to dried watercolors and you’re good to go.

The basecoat looks white in this shot but it’s not, it’s actually a light grey called Lake Fog. The only craft paint I used in the painting.

I could’ve mixed the color, I suppose, but I had it and Martha Stewart’s craft paints have very good coverage so that’s my story and I’m sticking to it. 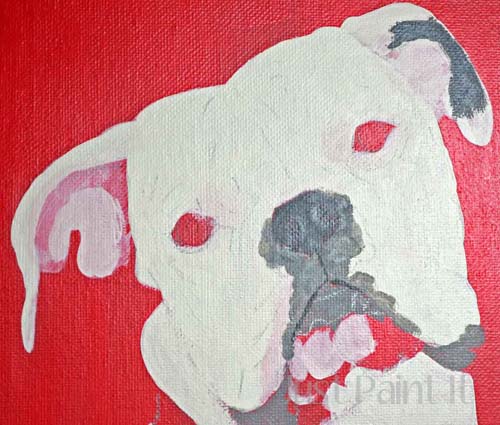 Rather than pencil in the wrinkle lines, I transferred them with graphite paper from the sketch I drew. It’s what I’ve always done, or almost always. And it’s always worked.

Until today. Sheesh. I’m painting another bulldog and I did the exact same thing with the sketch and the transfer paper and . . . . ick. Ick. Ick. ICK.

Everything was way off.

I’ll save that story for another day. Let’s just say, it’s very nice to look at these photos of this bulldog because it’s proof that I actually can paint one. lol. 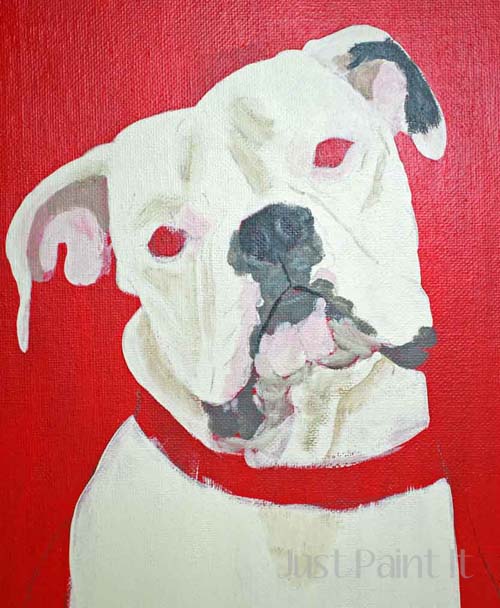 Oh yes, no matter how many years . . . and dogs . . . you’ve painted, those self-critical doubts creep in when you least expect them.

Anyway, back to this painting. I mixed white+black+raw umber to get a warm grey for shading then dabbed it where the wrinkle lines were. I mixed it darker, as underpainting, so it’d show thru when I painted over it.

I like underpainting a bit more than wet-blending, where you mix your colors right on the canvas. It takes longer to underpaint, but it feels safer to me. hahaha.

Truth be told, it doesn’t matter which way you do it. If you mess up, you still have to paint over it. 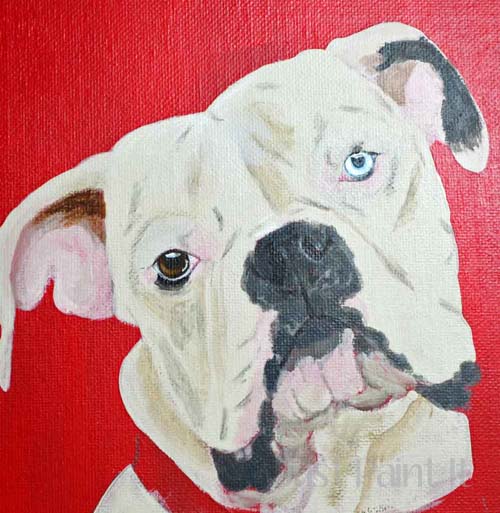 The eyes. Heterchromia. That’s what it’s called when a human – or dog – has two different colored eyes.

And how interesting that the brown eye has black markings underneath it and the blue eye only has pink.

Just like a box of chocolates. You never know. 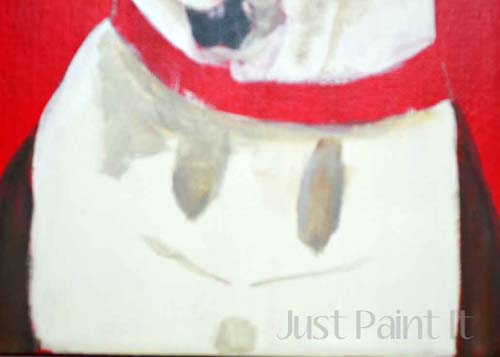 sorry for the blurry pic

Painting all white or all black anything is tough, I think. Especially animals. Although I’m not sure which is harder, white or black. Probably black, just because you can underpaint with the white.

For black you have to use shades of grey. Fifty of them. Hardee-har-har. (No, I haven’t read the book. Are you kidding, I’m a widow! We’re not even going there.) 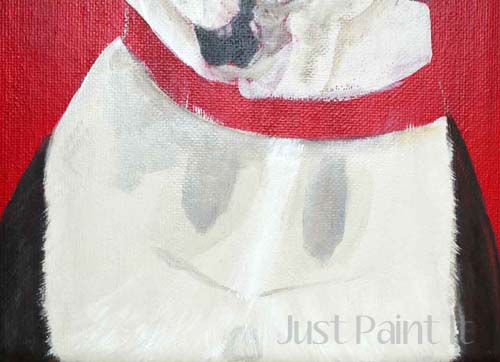 It took a few layers to cover this underpainting that was obviously too dark. ahem. 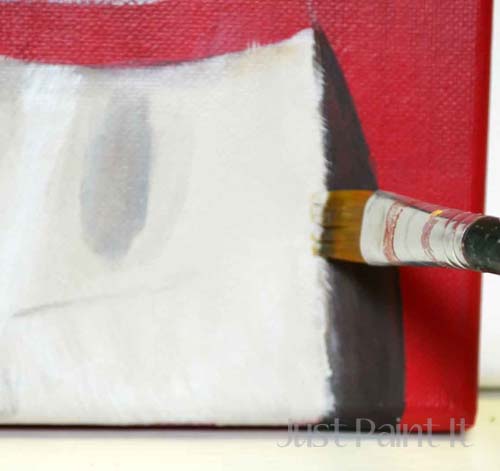 I use a flat brush and flick it to get the little hairs. Not always, but as much as I can because it goes so much faster than a small liner brush.

I promise the video tutorials are getting closer. The web cam in this computer quit working so I couldn’t do Google+ hangouts – my favorite way to do videos. I bought another webcam and was trying to figure out how to configure two cameras – one to show what I’m painting and one to show my mug – and then it dawned on me that I have my brother’s brand new laptop. *eyeroll*

So as soon as I get caught up with the doggies and kitties, I’ll start the weekly videos again. It’s so much easier to see how to paint with video. 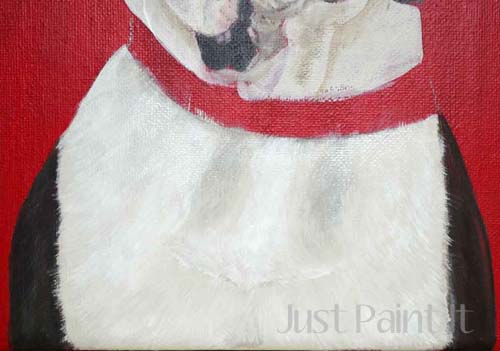 Finally! You can see a little shadow but not two gaping holes.

Finished, all but the collar and dog tag. 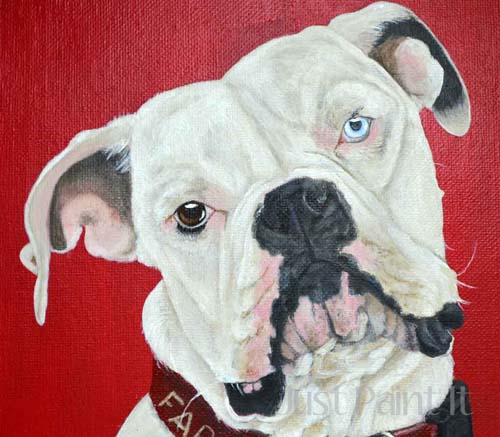 I’m always amazed at how much ‘life’ is added when the whispies are painted in.

And bulldog painting is finished. 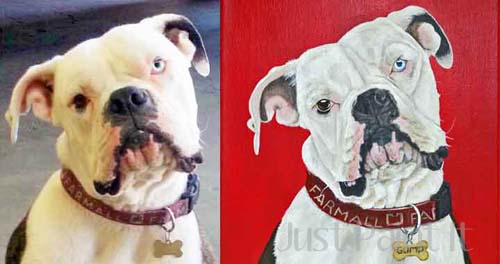 Adella gave the painting to her hubs last night for his birthday and I heard it was a big success. 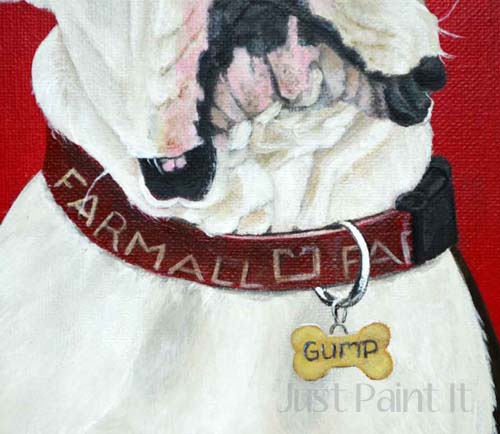 I’m so happy that the family and this dog found each other.

It’s so true that you don’t know what you’re gonna get when you adopt a dog.

But Gump, he’s as sweet as they come. Inside and out.