I have to confess – when I was contacted to paint this mural, I had no idea who the Tuskegee Airmen were. I just did what I always do – I Googled Images for research. What I found interested and amazed me. 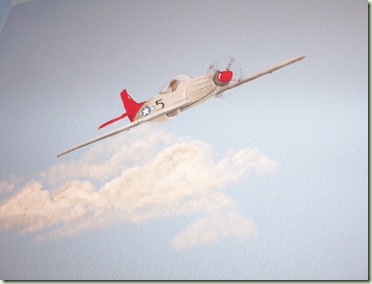 Being the stepmother to 3 black men, I had kinda prided myself on teaching them black history. Well, as much as I knew – which turns out is very, very little. As a matter of fact, I recall Whoopi Goldberg hosting the Academy Awards that year, if memory serves, and telling the kids what a landmark occasion it was. They responded with combinations of blank stares and rolled eyes. Ah yes, the common response of 3 preteen age boys.

Anyway, I clicked on a picture of a Mustang fighter and saw the website of the Tuskegee Airmen. They were the first black military aviators for the U.S. They flew in WWII, when the military was still racially segregated. Wow! How little I knew about black history.

So I was more than a little honored to paint a little boys’ room with Mustang fighter planes. Plus, my client is a graduate of Tuskegee University. While I was painting, she gave me  wonderful brief lessons in black history.

First, we painted the room out in a beautiful sky blue. Note the closet and no doors. We’ll get to those in a minute. 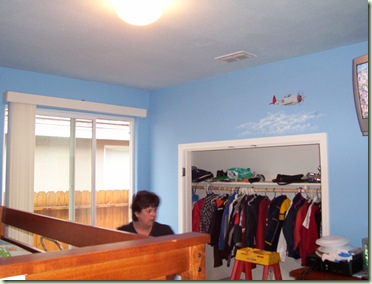 I painted three planes with a few clouds surrounding them. 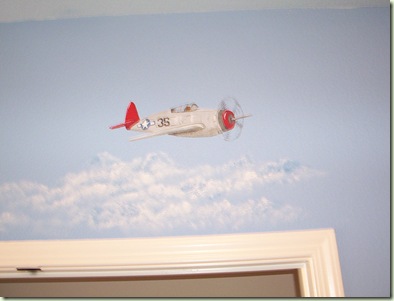 This one was above the closet doors. 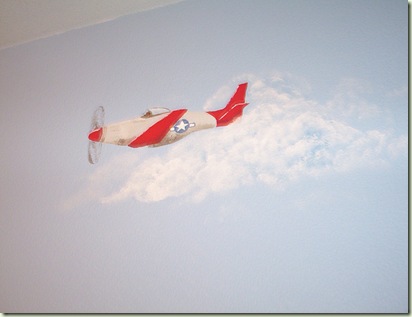 Another over on the wall by the bedroom door. The third (pictured at the top of this post) was painted by the window.

The little boy has a bunk bed so we needed something above his bed. Plus, I wanted something large enough where the pilot could be seen. 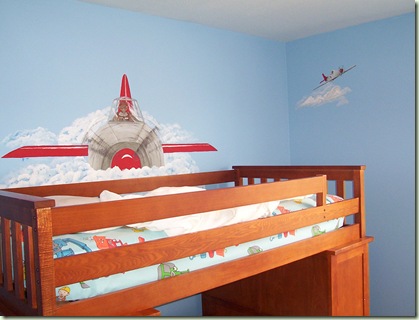 Look closely. Can you see? Yes, the pilot is african american. And on his bomber jacket his name tag reads “Clark”, the family’s surname. 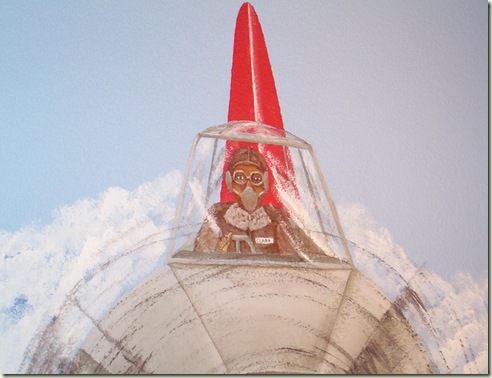 Oh yes, the closet doors. These were totally Hubby’s idea. I actually thought it was kinda weird – a ‘guy’ thing. But they turned out pretty cool. 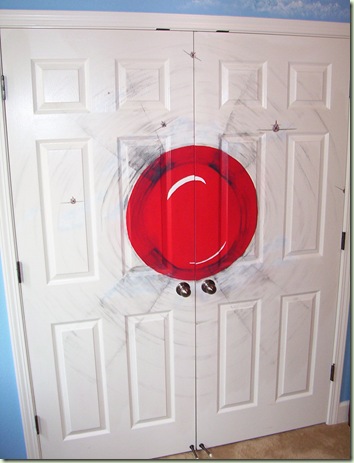 Do you get it? It’s the nose of a Mustang fighter plane with little planes flying ‘behind’ it. 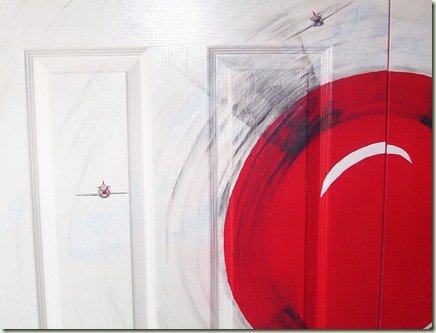 I won’t tell you what a pain in the a** joy this was to paint. Paneled doors. Bright red paint on white – uh, very hard to correct overpainting mistakes. But they turned out to be the highlight of the room. Go figure.
And here’s what makes my job the best job in the whole world. 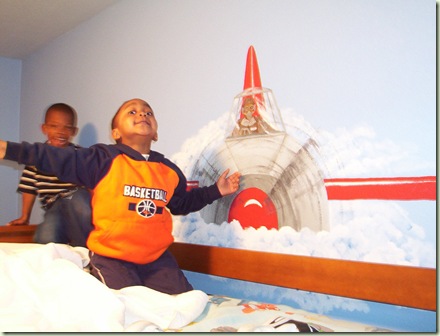 A very happy boy and his cousin, jumping around, pretending to be pilots. Cute, huh?