Maybe it’s because we’re going to the cabin tomorrow.

Maybe it’s because I know I promised Caroline I’d write about growing up at the Chalet.

Maybe it’s because I came across this blog by a girl who has no idea who I am, who wrote a post full of beauty and grace about her brother, who left this world far too early.

Whatever the reason, I’m feeling compelled to write about Echo. Echo Lake. And Echo Chalet, the resort my dad owned and where I spent my childhood summers.

It occurred to me I don’t remember my first summer there. I was only four. Nearly 50 years ago.

Actually, my time at Echo Lake began in 1950. Seven years before I was born. 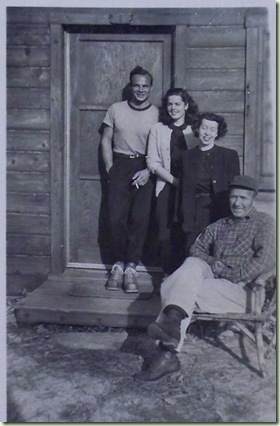 My mother and father were living in Ojai in southern California. My father had just finished a huge construction project for Bush Oil – a guest house that had over 4000 square feet.

And, yes, we believe it was that Bush Oil.

Finishing a project of this caliber brought a huge bonus.

Which afforded them the means to take a skiing trip. In northern California.

They stopped in the San Francisco bay area to visit friends, stopped by a ski shop and saw a brochure. 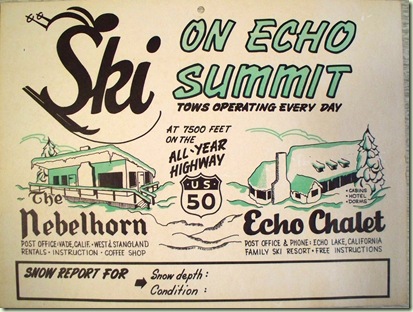 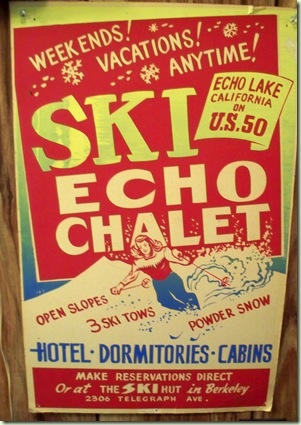 At any rate, they headed up Highway 50 to a little ski resort called Echo Chalet, owned by Haven “Jorgy” Jorgensen.

But this was 1950. My oldest brother was barely a toddler. My other brother hadn’t been born.

My mother was a gorgeous young woman. 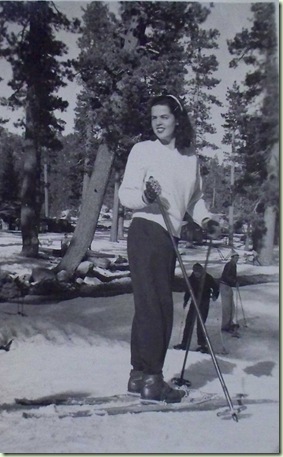 Who only had eyes for my father. She was on vacation with her handsome husband to ski.

Where they met Jorgy, who was quite hospitable, and they enjoyed their two week stay, lodging upstairs at the Chalet. 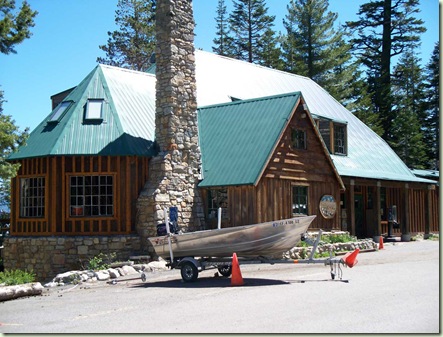 And then they went home. Back to southern California. Back to Life.

Fast forward, now, to 1955. My parents had added another boy to the family.

They needed to get out of the rat race of southern California. Somewhere quiet, relaxing. A place that would give my troubled father a break.

Mom remembered Placerville, the little town centered on Highway 50 they drove thru on the way to Echo Chalet. A quaint spot in the foothills.

And for a couple of years, the move seemed to do the trick. My father found some peace. Enough, at least, for them to add another child. A daughter. Me!

But I was little more than a toddler when Mom knew the marriage was over.

As a single mother with 3 kids she needed to work. She met this nice man thru mutual friends while playing in a volleyball league. He needed someone to do some typing for him. 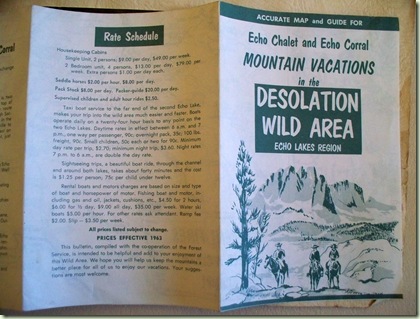 Mom remembered Jorgy from her ski trip those many years before. She’s not sure if he remembered her, but she went over to his house and typed up his notes so he could take them to the printer.

Sometime after that, he invited her – along with me and my 2 brothers – to stay in a cabin next to his for the summer. Just a good, old-fashioned, hospitable invitation. 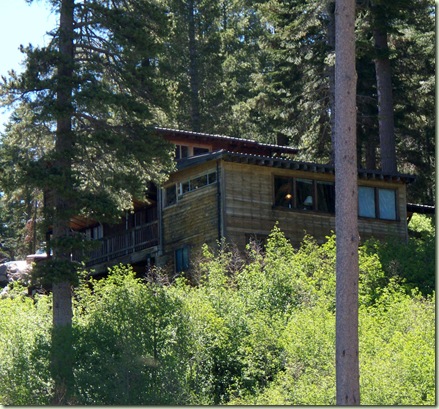 The ‘little brown cabin’ that we stayed in for 2 summers no longer exists. It was right down the path from this large year-round house that Jorgy had built.

I don’t remember a thing about that summer. I was 4, remember.

I don’t remember much about the next summer either.

Except for one day in particular.

It was on that day that Mom married Jorgy on the big cabin’s patio, overlooking the lake.

And that’s how we came to Echo Lake.