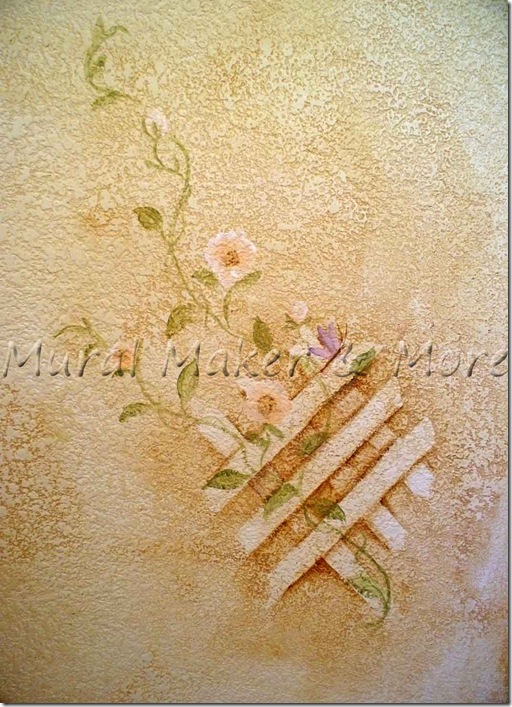 I totally understand that wall murals aren’t for everyone. I do. But I think one of the reasons more people don’t add decorative paint touches to their walls is because they think it’ll overwhelm the room.

It doesn’t have to, though. Just some simple painted elements here and there can transform a plain white box into a warm, inviting space.

Not that you need a toilet room to be inviting. I mean, the very nature of those rooms make them inviting when the need arises.

I’m trying to be delicate here. 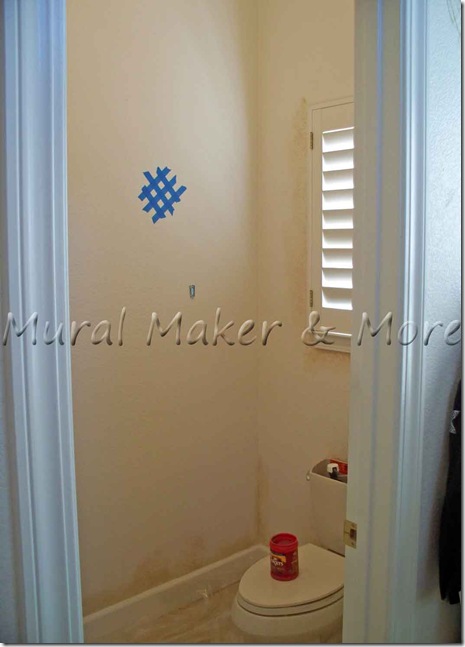 We painted this room after we finished the tray ceiling in the adjoining master bedroom. 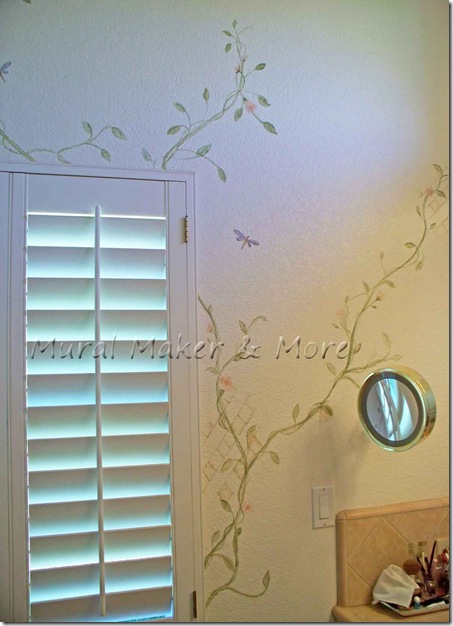 I had painted some simple trellis and vines on the vanity walls quite a few years ago.

Come to think of it, there aren’t too many rooms in this house that I have not painted. But I’ll share those rooms with you later on. 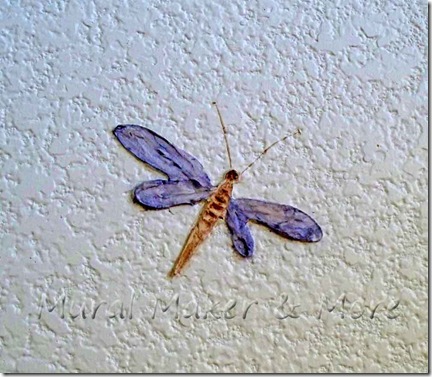 It was during one of my ‘experimental’ phases with joint compound. I cut a dragonfly stencil, troweled on some compound and then painted it after it dried.

Come to think of it, the past 15 years have all been experimental when it comes to painting.

That’s how I’ve learned everything – trial and error. 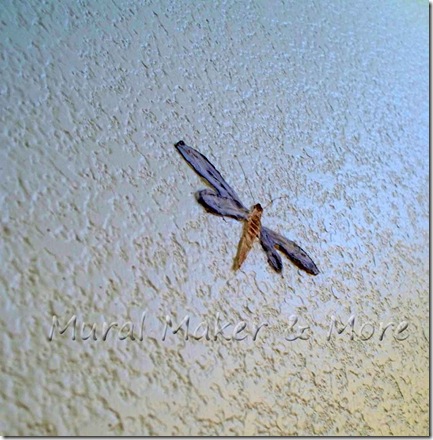 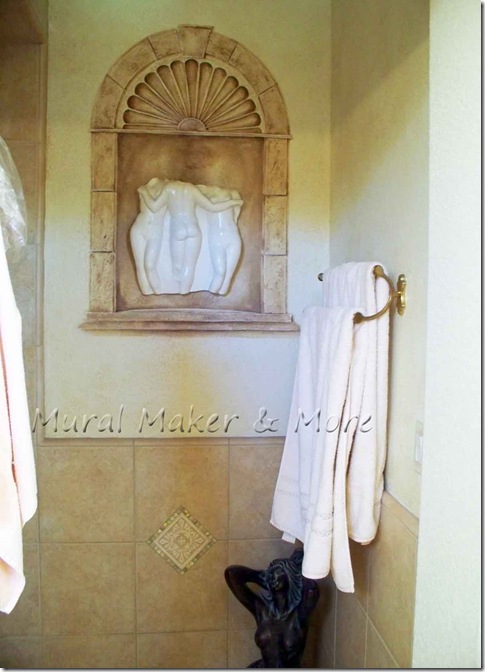 Okay, so I’m having a hard time staying focused this morning {what a surprise}. I’ll just have to do a little series of all the decorative painting I’ve done in this house. Otherwise this post will turn into one of those “long story short’s”.

Which it already has because any time someone says “long story short” they’ve already bored you with a long story, right? 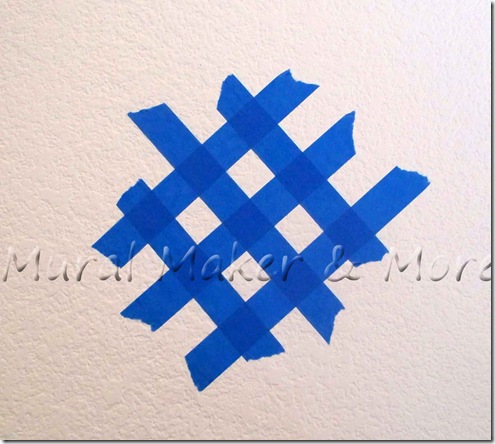 Before the walls were painted with a color wash, I made a patchwork out of painter’s tape for the trellis. 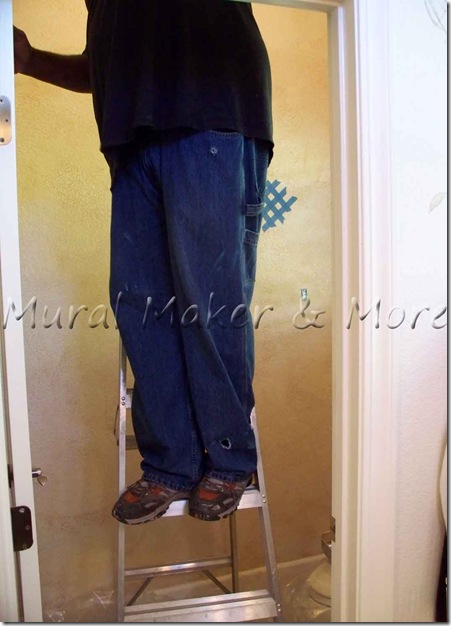 Then I had my ‘assistant’ rub the glaze on the ceiling and walls. 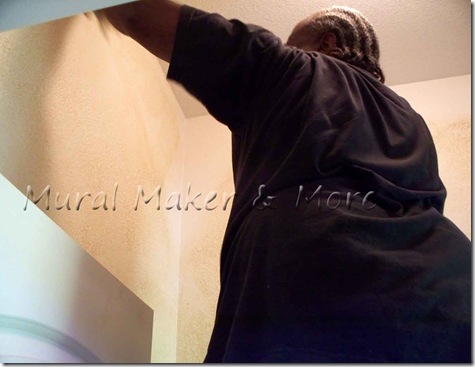 It’s handy to have a 6’4” assistant when the walls are 11’ tall and you’re in a small space that won’t accommodate a tall ladder.

Plus he works much, much faster than I do.

Plus he doesn’t have OCD tendencies so he doesn’t get caught up in specific areas here and there. 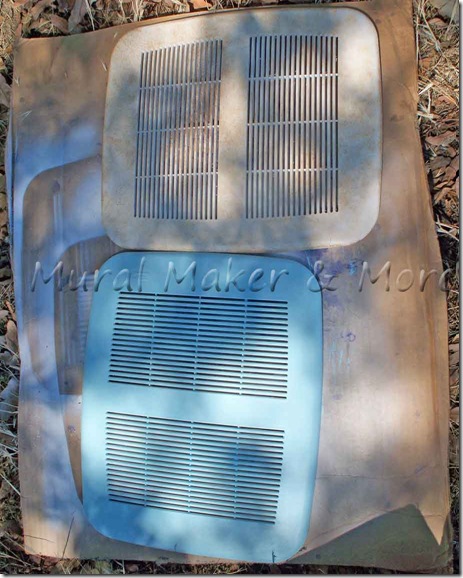 Before he started on the ceiling, he removed the fan vent cover. I primed it with Zinsser spray primer, then rolled on some glaze and mottled it a bit with a wet rag. 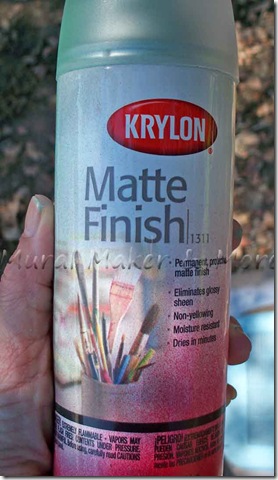 Then sealed it with Krylon Matte so it wouldn’t have a sheen. 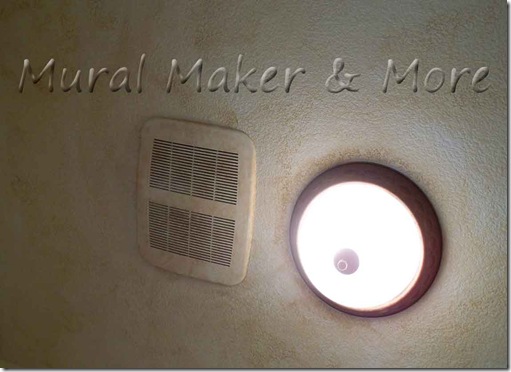 Now there isn’t a big ol’ white square in the ceiling. 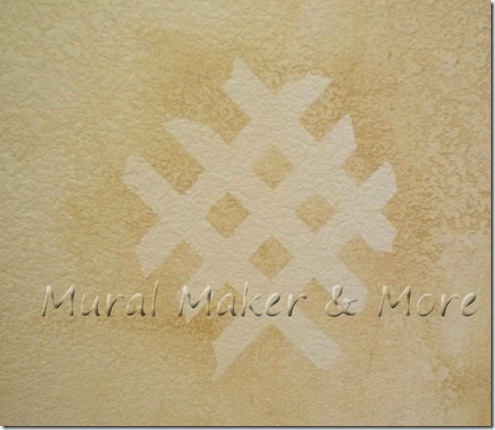 When Hubs was done glazing, I removed the painter’s tape and said *@#(*%! uh-oh. When I painted the trellis in the vanity area years ago I had just added some shading. 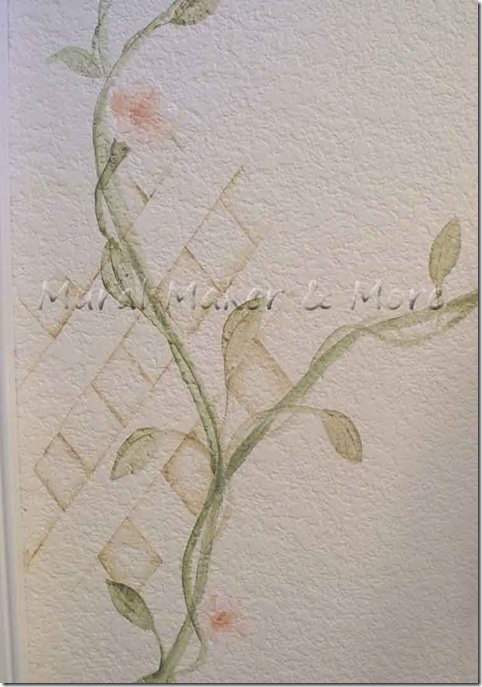 I didn’t need to color the trellis ‘boards’ because they just blended into the existing wall color. 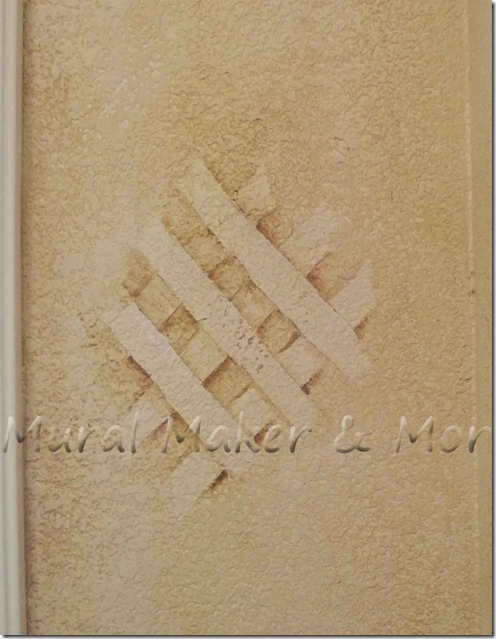 I guess the experimentation continues. But it was an easy fix – just a coat of glaze over the trellis. 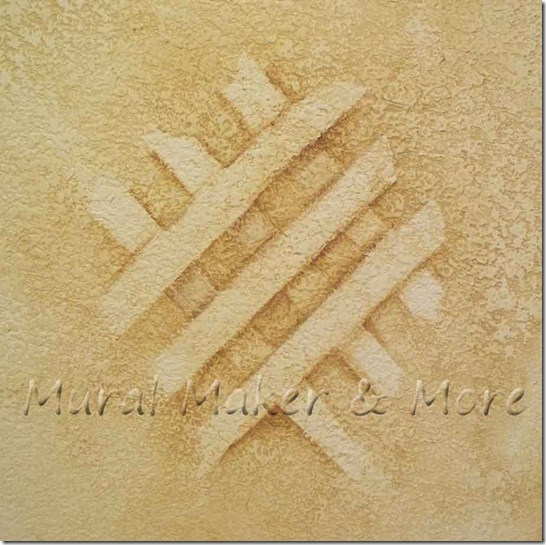 I’ll do a little tutorial later. It’s incredibly easy to paint this little patch of trellis. 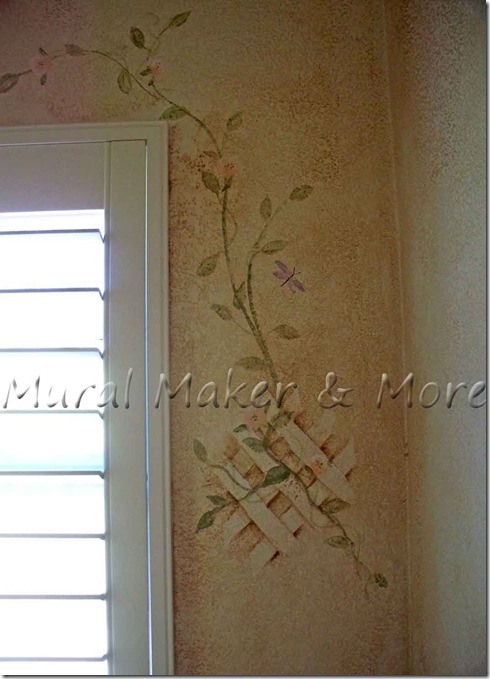 Then some leaves and vines in green, a few simple flowers and a dragonfly or two – sans joint compound this time. 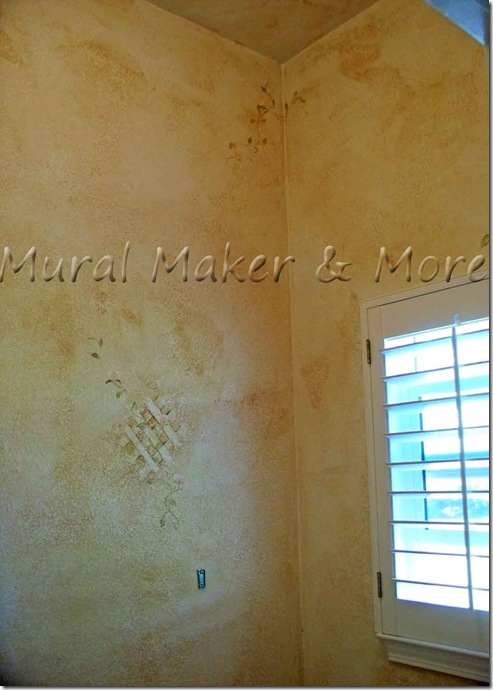 Very simple, but adds a lot of impact, doesn’t it? 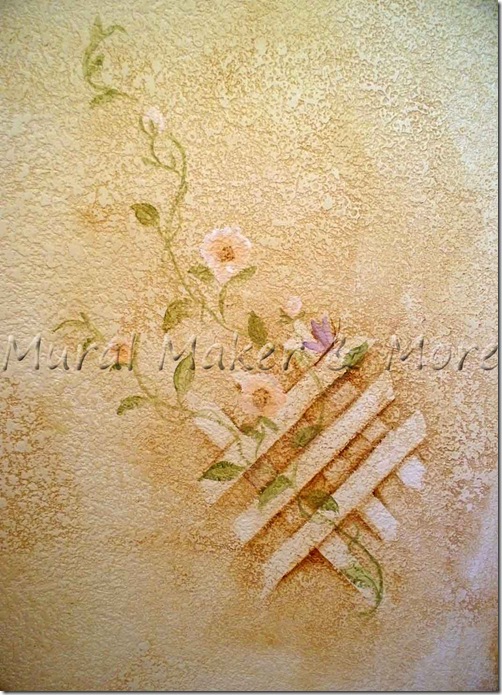 And now their little white box of a toilet room has been transformed into warm, inviting space. 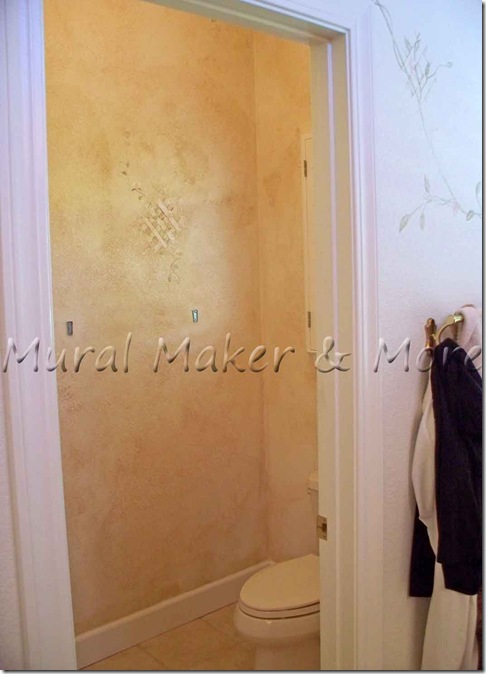 Not that you need an invitation to this room.

But we’ve already been down that road, haven’t we?