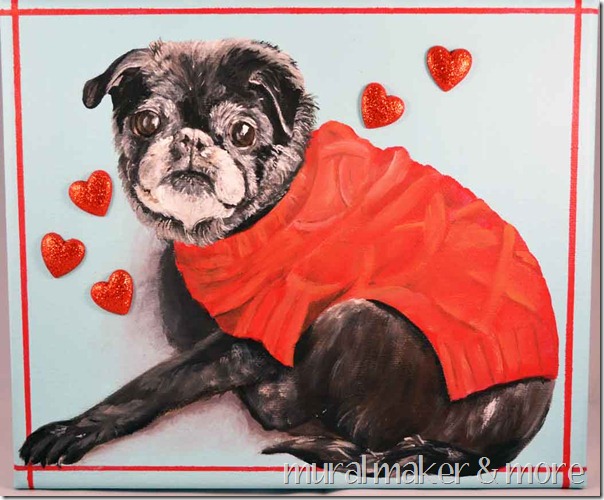 Painting portraits has never been my ‘thing’. Especially human portraits. Except when it comes to dogs. Then it’s more than painting. It’s absolute sheer joy. Oftentimes, I don’t even get to meet the pup irl. But, I did get to meet sweet l’il Nellie (and her mommy) the day before my husband went to the ER.

I’m so grateful I did too, because Amy lost her ‘piggie’ just a few days after I lost my big ol’ bear.

There was no question – I knew I wanted to paint Nellie for Amy. I wrote and asked her to send my some of her favorite photos so I could do a painting from picture. 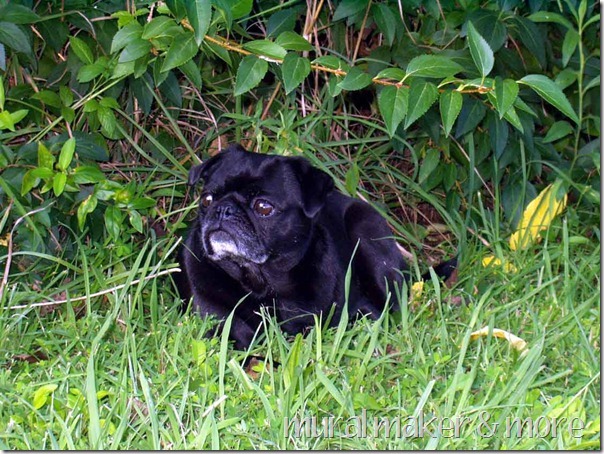 Aw, man. It was hard to choose one. How darling is that little face? 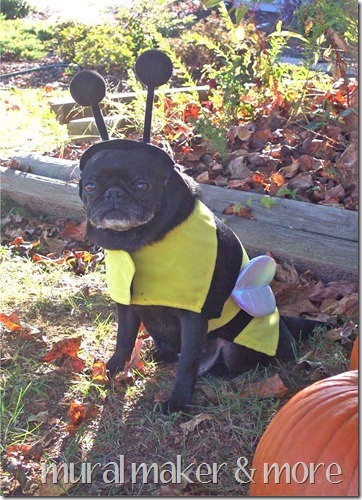 But this one had me giggling. (Right now, any giggles are like pure gold.) 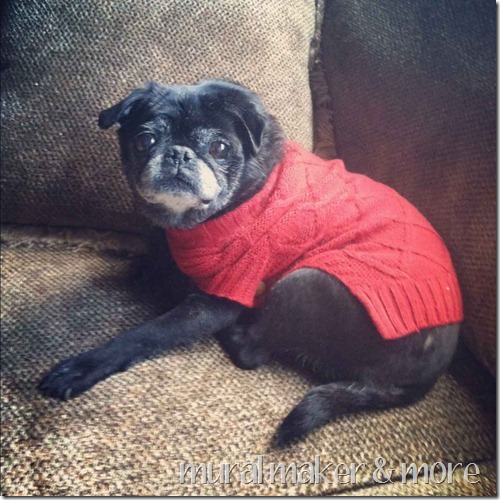 I wanted to do all three – either as a montage or three separate paintings. Even though painting from picture isn’t that difficult for me, I’m still too up and down, never knowing from one moment to the next how I’ll feel. I finally settled on this one since it looked the most like the Nellie I’d just met. 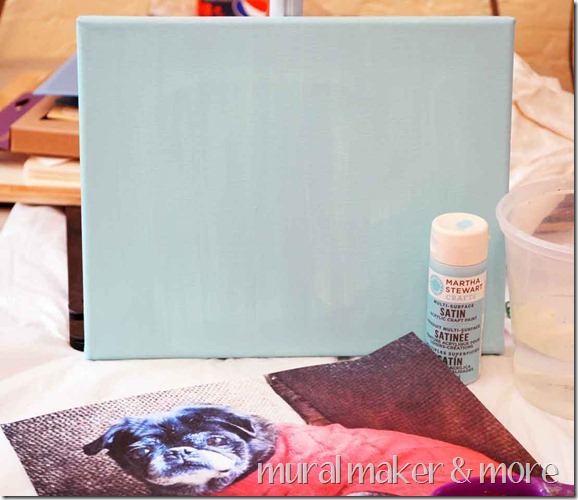 I enlarged the pic to 8 x 10 and basecoated a stretched canvas in light turquoise, knowing it’s one of Amy’s fav colors. 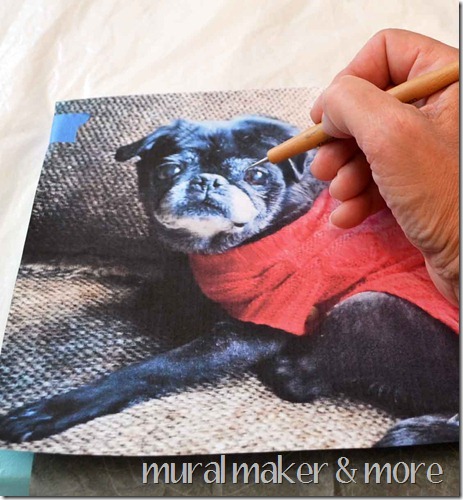 I slipped some graphite transfer paper between the copy and the canvas and traced the outline, paying particular attention to Nellie’s eyes and nose. After years of freehanding, painting and then repainting, I’ve learned to just trace the outline. It saves loads of time.

Painting animals is like painting humans in that way. You have to get the relationship of the eyes to the nose to the mouth just right if you want to capture the right expression. 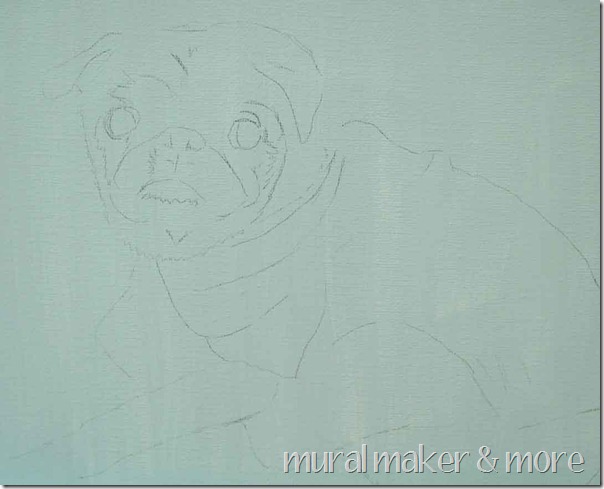 I know, I know. It doesn’t look like much to go from here, does it? 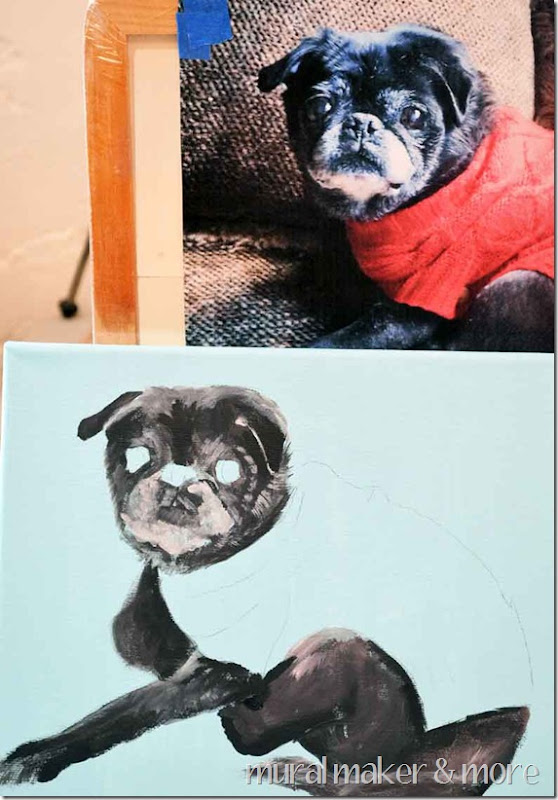 This is a tad better. I start by underpainting – blocking out the dark parts. Well, I should say usually the dark parts. You can’t do that with black fur or you have nowhere to go with shading. So I block with more of a charcoal grey and that allows me to shade with darker grey and black. 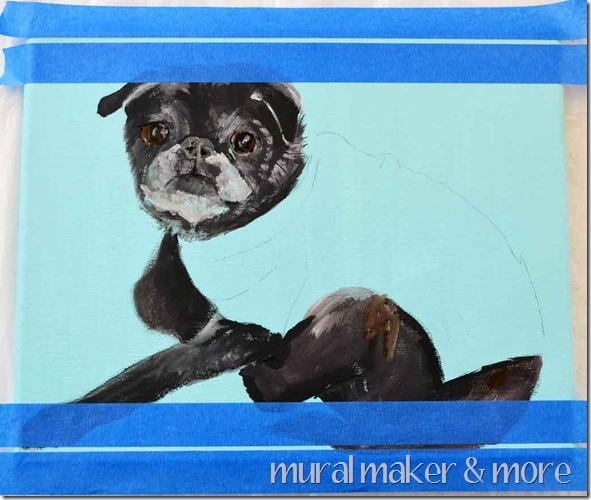 Confession: I’m terrible with borders. Creating borders, I mean. I’ve tried stencils. Ick. I’ve tried freehand stuff. blech. I never like my borders. Ever. But I had a light bulb moment for Nellie – a) her red sweater (ok, so the lightbulb isn’t the brightest in the box. Gimme a break here.) and b) turquoise and red is very retro. “Mid Century” is what they’re calling it. I call it childhood memories, but we won’t get into that, k? 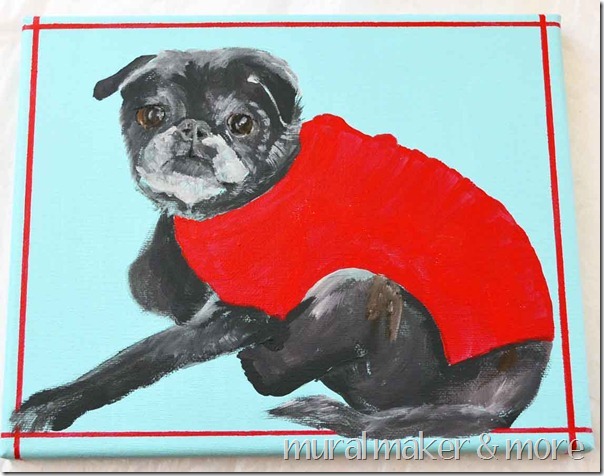 See? Now, I coulda added another stripe or brought the stripe into Nellie a bit closer, but I had something else in mind. 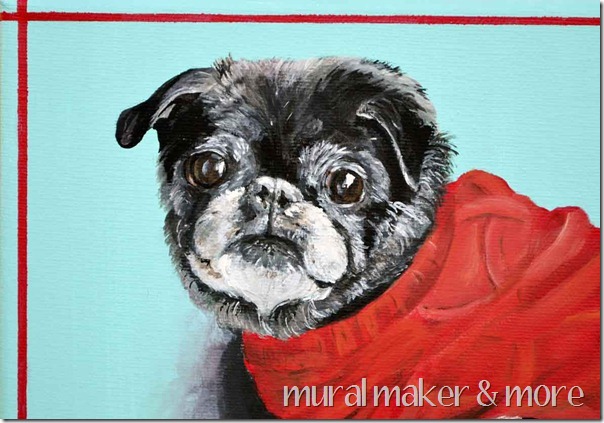 I had to finish her face first. Actually, her eyes. If you get the eyes right, the viewer will barely look at the rest of the painting.

I don’t know that for certain but a professional photographer told me years ago when I was trying to choose a ‘head shot’ for my dance resume and couldn’t make my mind up, “Look at the eyes and forget the rest.”

It holds true with paintings – it’s all in the eyes. Of course, you need the eyes to nose to mouth relationship right too, like I said before. 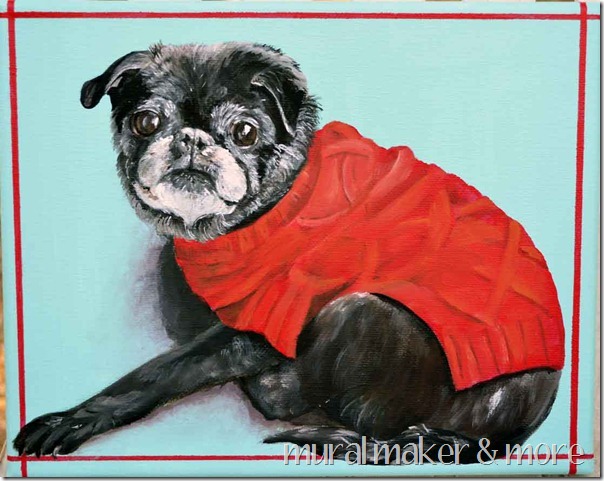 That’s not to say that you don’t want to get all of the features and markings right, ok? But I’ve never had a client tell me to “make sure you get that mark on her tail” or whatevs. No, I take that back. I once was doing a painting from picture and the dog’s muzzle looked grey in the photo but was actually pink irl. The owner caught it on the proof I emailed her and I was able to fix it before shipping the portrait. So, forget what I just said. 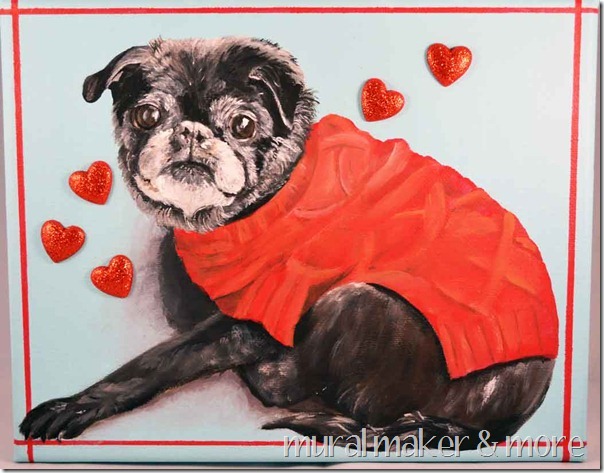 The final touch were these puffy glitter hearts I found at Michael’s. Perfect.

I said at the beginning that painting pet portraits is sheer joy. When the painting is a memorial, for a dear friend, that joy is multiplied ten times over. And when the doggie passed just a few days after my husband? It becomes some sort of joyful catharsis.

I’m just positive that Marlon and Nellie have found each other and are having a good ol’ time together.

You can see more of my pet portraits here. I’m happy to paint any breed and any type of animal too, not just cute doggies.