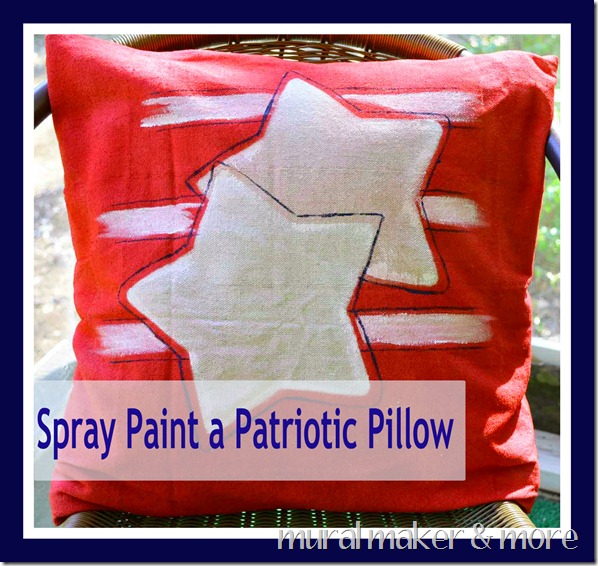 A while back I started some paint projects for Memorial Day. Well, since Life thru me a curve ball, I’ll just use these for 4th of July. This project didn’t start off as a pillow, actually. 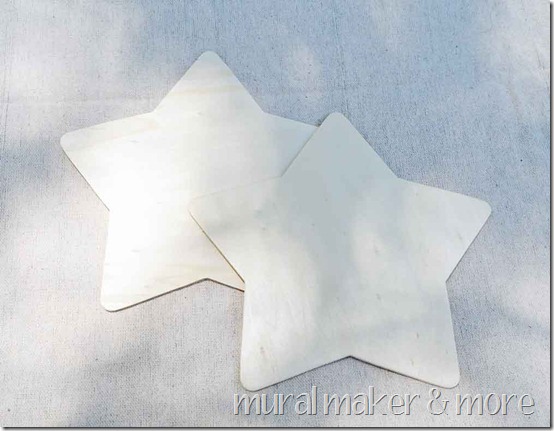 I had these wooden stars in my unmade Christmas project stash. You know the one, right? Unmade Christmas, unmade Easter, unmade general crafty stuff. Well, now they were in my unmade Memorial Day/4th of July stash. (As of this writing, they’re still unmade, btw.) 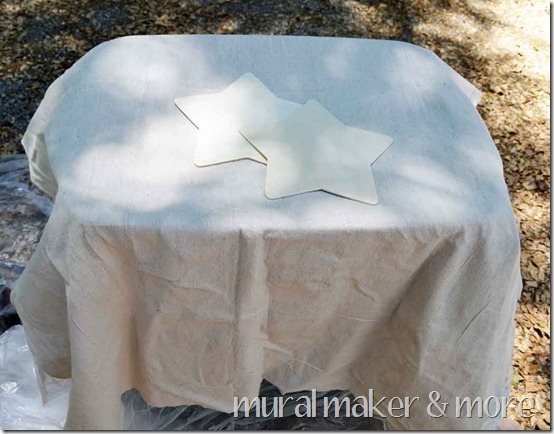 I did what I always do – set up my spray paint “station”. Which is a couple of plastic totes outside, covered in a plastic drop and then a canvas dropcloth draped over the whole thing.

This time was a little different. Somehow I’d grabbed an unused canvas drop instead of one of my paint-spattered drops.

I didn’t even notice. I call it the “widow fog.” (keep that in mind if any of my tutorials don’t make sense. Sorry, in advance. Just let me know what doesn’t make sense and I’ll try & fix it. ANYhoo . . . I was just gonna spray the stars a pretty cherry red. I love this stuff by Krylon. I’ve used it on hearts for Valentine’s Day and on a watermelon linoleum floorcloth last summer, which is still in great shape. If you haven’t tried Krylon Dual, do so. Let me know what you think, k? 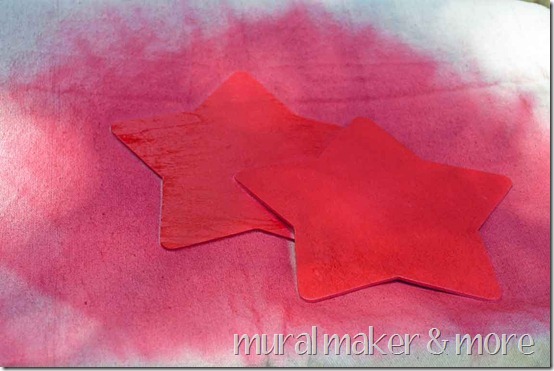 Do you see where this is going? Not yet? 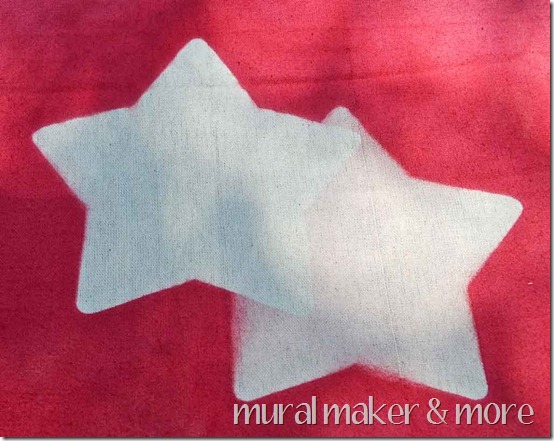 How ‘bout now? Um, yeah. A reverse stencil. Could it work? Could I just spray paint the dropcloth red?

Why not? It actually only took about one can to paint enough canvas for two pillows. 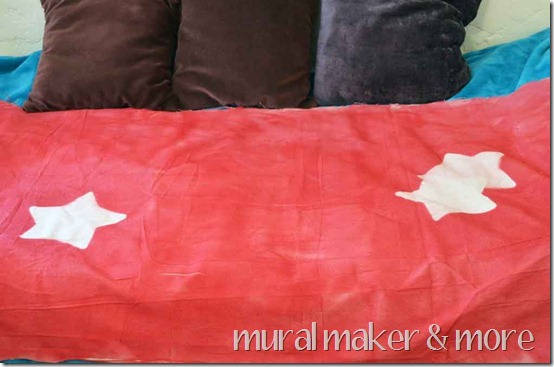 I hadn’t ironed the canvas, obvs, and the red wasn’t a real vibrant red. But still . . .  this might be pretty cool. So I let it dry, spread it out and just cut it down the middle, between the stars. 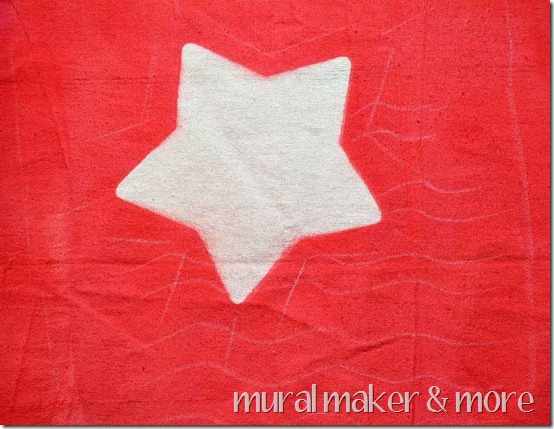 Then I chalked out a little pattern. 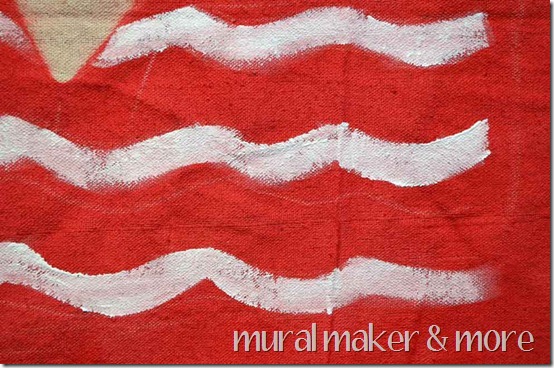 I used Martha Stewart paint in Wedding Cake white. It nearly covered in one coat. I only touched it up here and there. 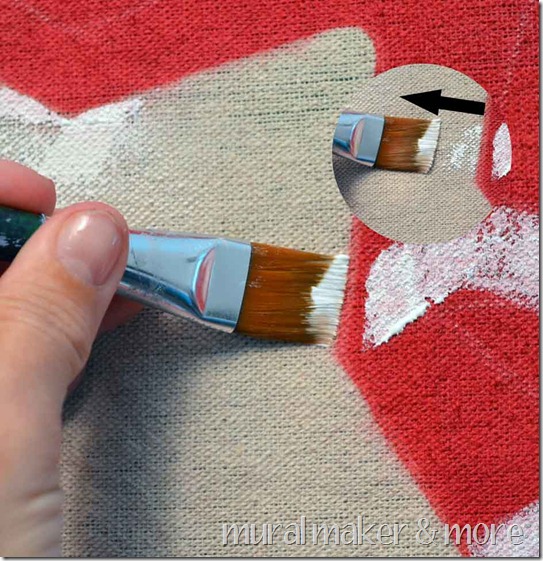 To paint the star I took a 3/4 flat and lined it up to the edge, then pulled it inward. The chisel edge of the flat brush gives a nice clean line, btw. 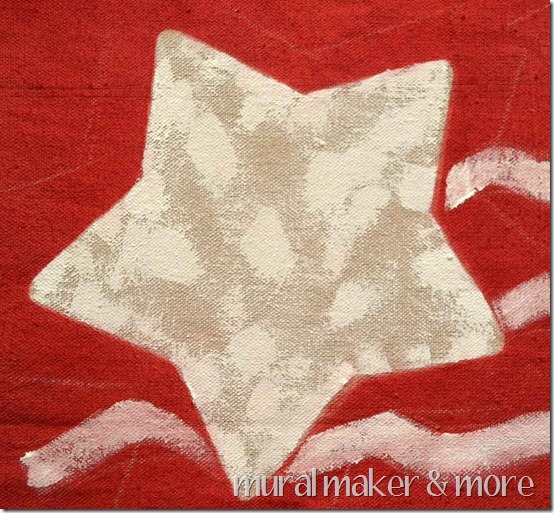 I’d never intentionally painted on a canvas drop cloth and I was kind of diggin’ the way it was looking distressed, so I just left it that way. Instead of painting 2-3 coats on the star and stripes. Then I dipped a round brush in some Navy Blue FolkArt paint for a little detailing. 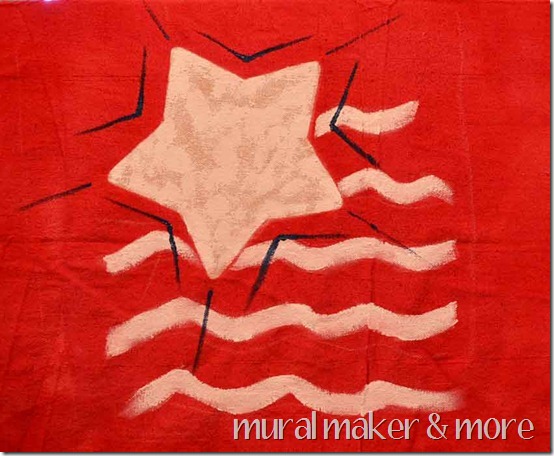 As in, a “little” detailing. But this was a crazy idea and I hadn’t planned any of it. I still wasn’t thinking it’d turn out.

Okay, if you’re a seamstress . . . no, if you even own a sewing machine, you’ll need to avert your eyes from the next few pics.

Don’t say I didn’t warn you. 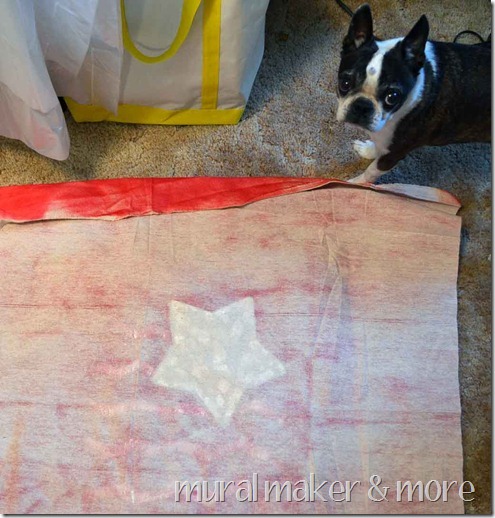 I put the canvas on the floor, painted side down. Sadie was making sure I put the right side down. She’s very picky, you know. A true Scorpio. (It takes one to know one.) 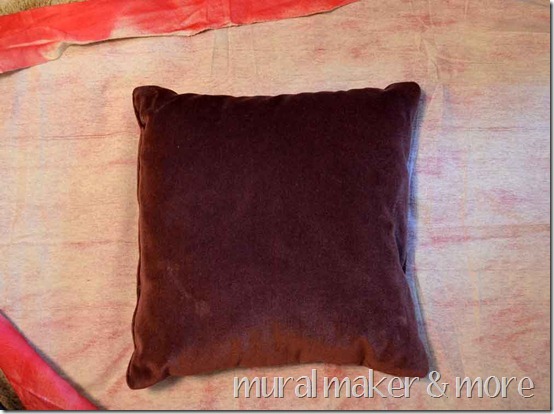 Then I plopped carefully placed the pillow on top of the stars & stripes, or in the general vicinity. 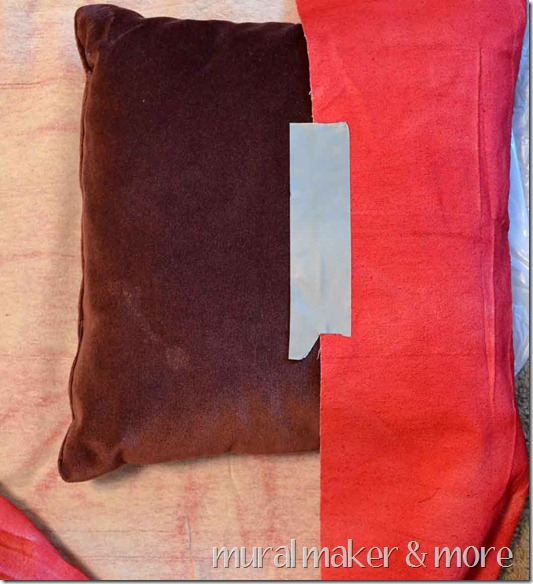 Before you click away in disgust, I’ll have you know I once recovered an entire couch with sheets and duct tape. And it lasted for years – years of 3 boys and one very large bull mastiff who claimed that particular couch as his own. I actually got the idea from Christopher Lowell who said duct tape was a great tool for dorm rooms. 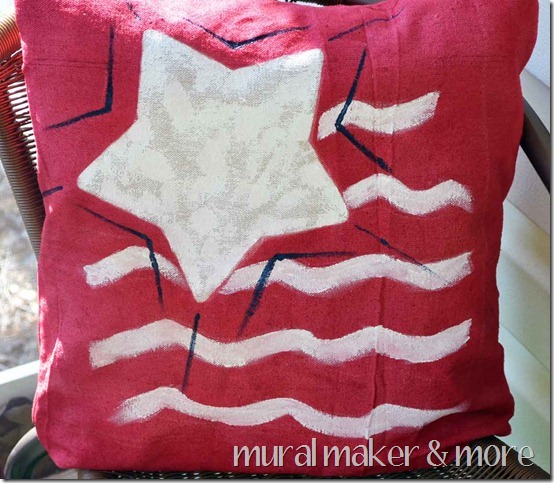 I wrapped this one up like a present. You know, fold in the corners to a ‘V’ on the sides, and tape it up! 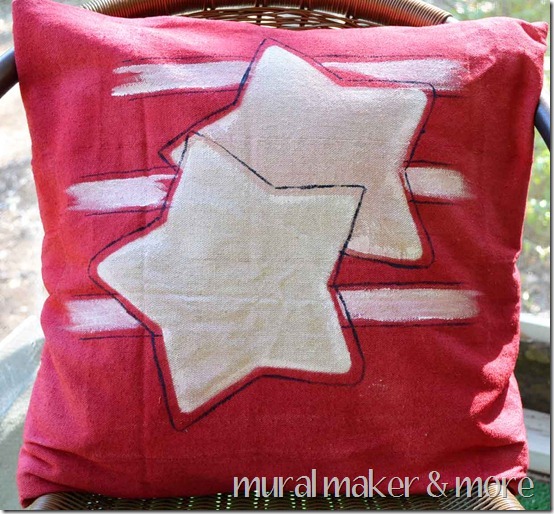 On this one I kept the ends flat – just folded over towards the center. The corners are better formed this way.

Just in case you wanna “make” a pillow for the 4th of July, that is. Or any other time, for that matter. 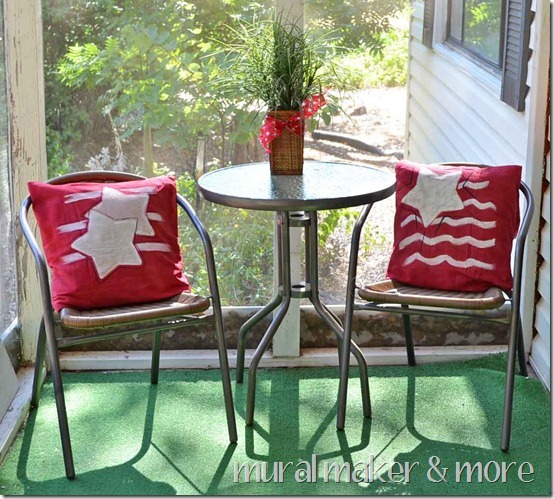 They add a nice little pop of color, don’t they? Of course, I do realize I run the risk of being horribly embarrassed when a visitor sits on one of the chairs, picks up the pillow and sees the duct tape. I get that. I’m willing to risk it.

Because then they won’t be focused on all of the leaves that are caught between the porch screen and the board. Hey. I may be in a fog but I’m not stupid!