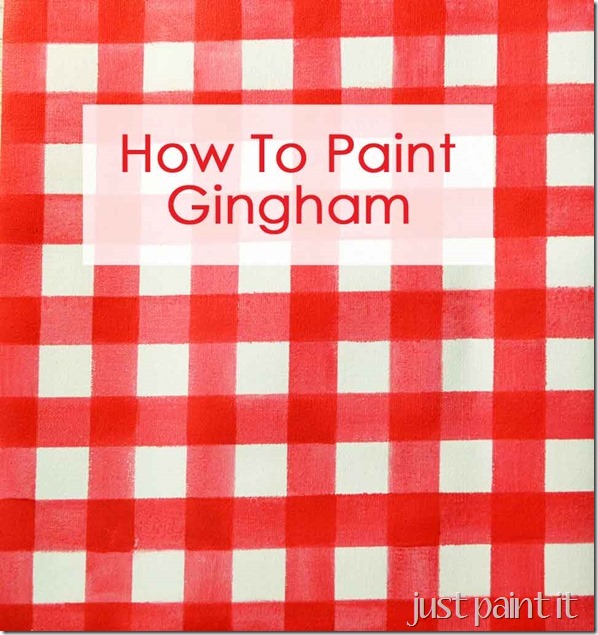 This is one of those projects that seemed really simple . . . until I tried it. I needed, or wanted I should say, a background for the BBQ & Picnic printables. Red gingham was the obvious choice, right? So I thought, well it can’t be that hard to paint some stripes, can it?

Okay, it’s not hard exactly. Actually, it’s pretty easy. But if you have any OCDish tendencies like me then painting perfect stripes perfectly perpendicular to other painted stripes can present some ‘issues’. ahem

Not to mention I painted them at night in the what-I-thought-would-be studio. So the lighting is all wonky on the photos too. But now I’ve moved my art supplies into the office where the lighting is good so no more wonky lighting. Or at least I won’t have that as an excuse for wonky.

I painted these on artist canvas. It’d probably work on watercolor paper too but since I was using painter’s tape I wasn’t 100% sure. So I went for the canvas. Start by marking how big you’ll want your finished piece and pencil that off. 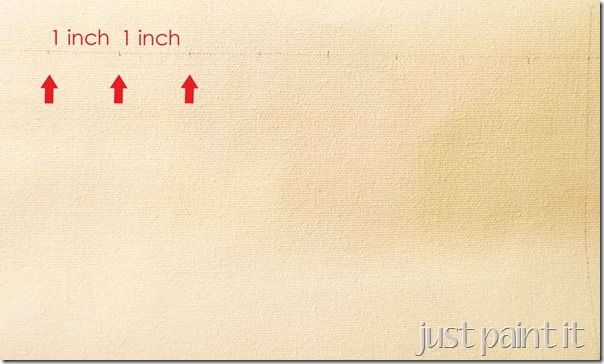 If you’re using painter’s tape, measure the width of the tape. Then along one side, make little tick marks that width apart. My tape is one inch wide. 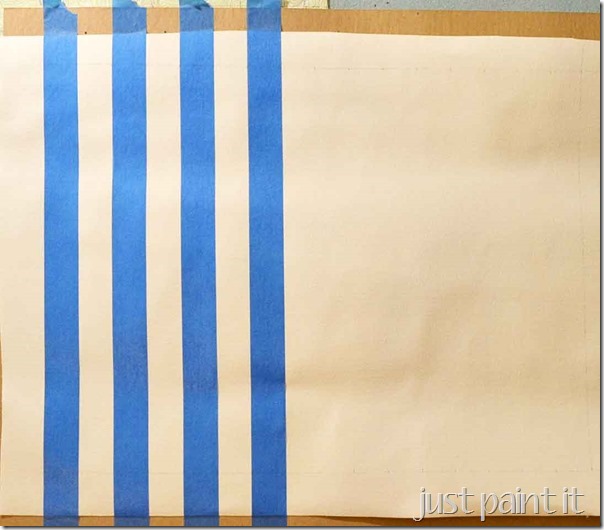 Lay the tape down in one direction. Be sure to burnish both edges of each piece of tape (press really hard with a credit card). 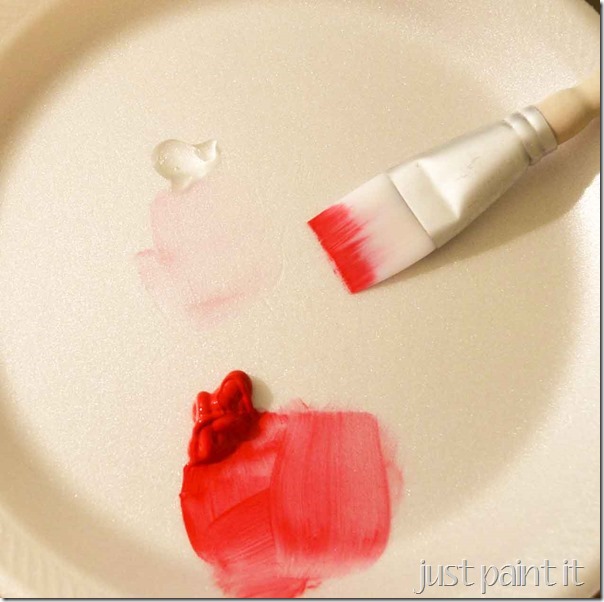 Since the spaces are 1 inch apart, using a 1 inch brush is best for even strokes. To get a translucent look, I mixed Martha Stewart’s Habanero Red with FolkArt Floating Medium. 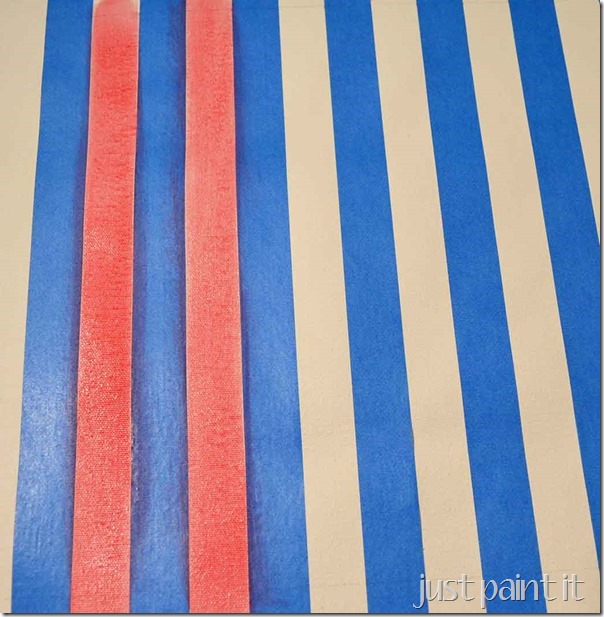 The amount of medium you mix with the paint will dictate how light your stripes are. I mixed about 50:50. It flowed really nicely but was a bit too light. My overall surface was 11 x 14 so I found stroking from the one edge towards the middle and then from the other edge to the middle gave the best result. The floating medium increases the paint’s “open” time so you have more time to even out the strokes.

Allow these stripes to dry and then apply a 2nd coat if desired then remove the tape. 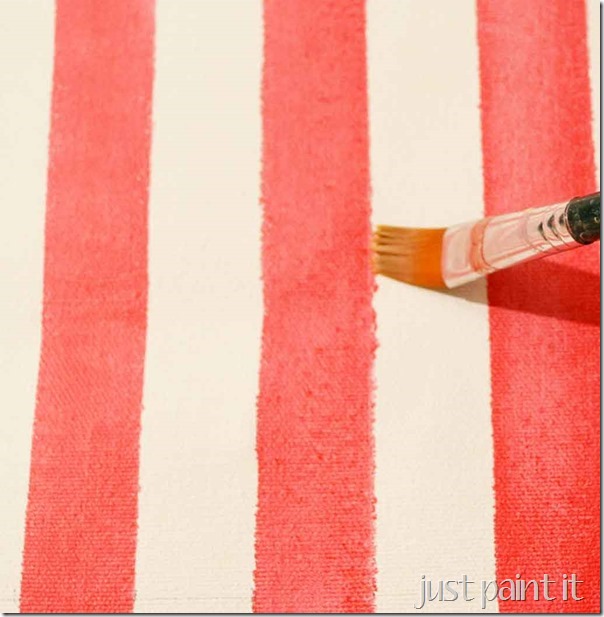 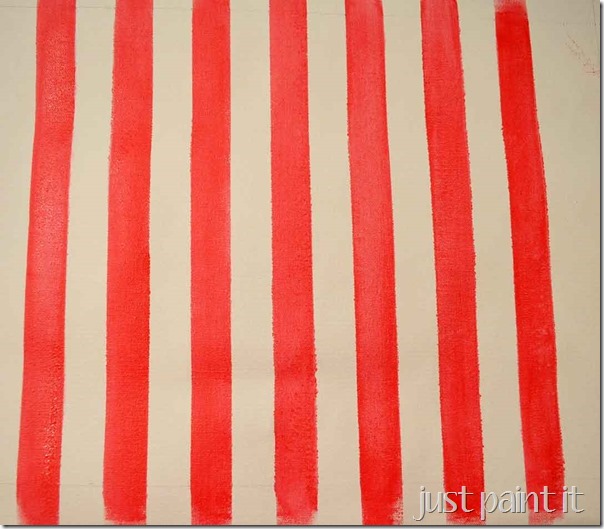 After the 2nd coat dries, turn the canvas or paper, then make the 1 inch tick marks and apply strips of tape . . . as close to perpendicular as you can get. 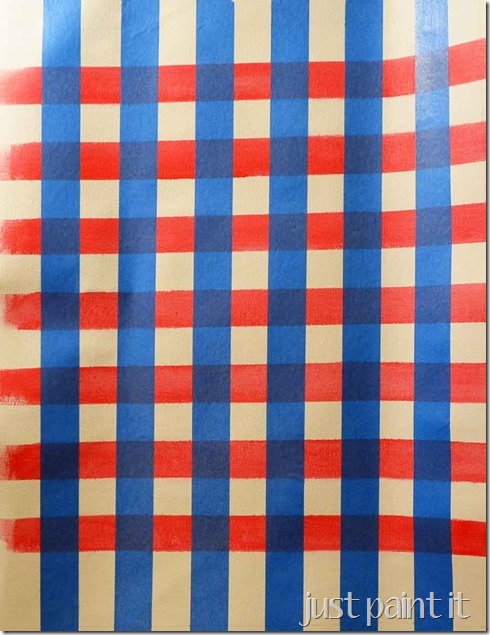 I tried to stand the canvas up to get a better shot so it’s bending on the right. To my eye, this looked all even and perpendicular. sigh. It wasn’t.

Anyhoo, with the same paint/medium mixture, paint 1-2 two coats for each stripe. 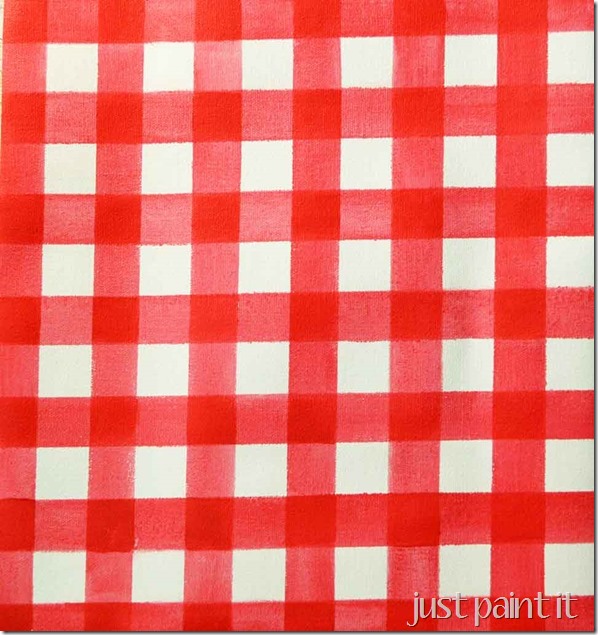 When you remove the tape from these 2nd stripes you’ll see how it looks like gingham, with darker red squares where the stripes overlap.

And if you paint it at night, in poor lighting, when you’re tired, you’ll think it looks pretty great! Until the next morning.

The lesson? I’m not sure. It’s either take more time making sure your stripes are perfectly straight and perpendicular to each other. Orrrr, the lesson is to just relax, it’s only a painting and it looks pretty much like gingham.

You be the judge. Me, I still used it for my BBQ printables and, so far, the reports have been good with people downloading them and having fun.

Even with wonky lighting and stripes, it was still a fun project.

Go ahead, tell the truth and shame the devil (as my hubs always said) – do you have OCDish tendencies? Or are you more of the Hey, it looks pretty good variety?