Note: the raffle for my painting, Two Cows for Oklahoma, is being extended to July 8 due to my recent move and having no internet. You still have time to enter! 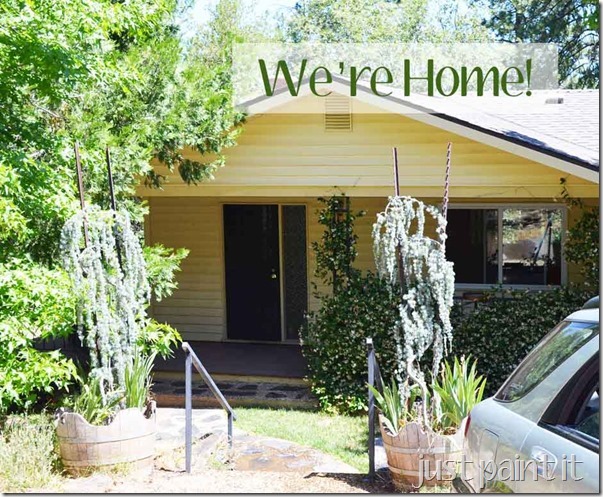 We finally made it. We’re in the new-to-us house.

There were a few times when I didn’t think we actually would make it. It’s been a long, hard, arduous move, I think the hardest I’ve ever had.

But today I want to forget about all of that and show you around a bit. Let’s start with the upper level – Mom’s space. The house is actually a ‘dual-living’ situation which makes it near perfect for us.

The house was built in 1963. Not only is it older, but it has a certain quirkiness that I hope to turn into a bit of funky charm. We’re on the outskirts of Placerville, CA, at an elevation of 2322 ft. It’s built on a slope with the three of the exterior walls downstairs made of cinderblock, keeping it cool in the +100 degree temps we’re currently having. We didn’t set out to find a dual-living arrangement, but after living for nearly 3 years without my ‘own’ space, I’m so grateful we found this house. 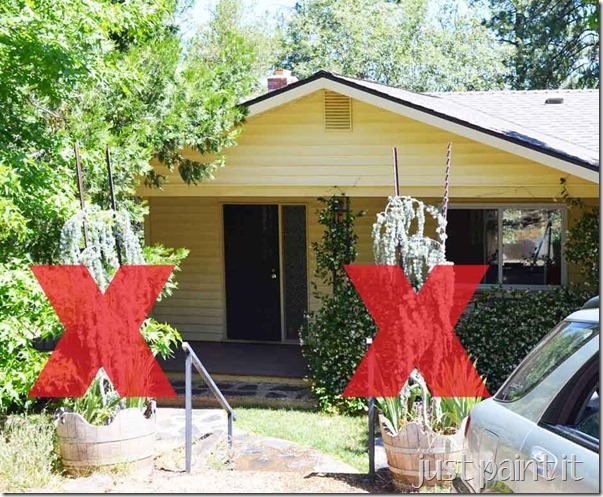 One of the first things I’ll change is those planters in front. I’ll keep the wine barrels but the rebar-trellis has got to go, along with whatever juniper-ish thing is climbing up it. I’ve never done much planting or gardening but there’s no time like the present, right? 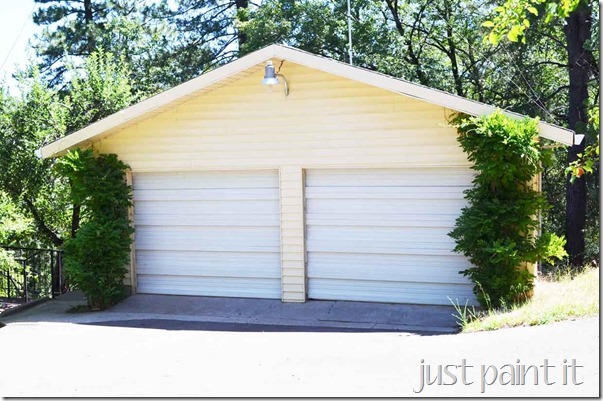 There is a detached, oversized two-car garage that is truly heaven-sent. It has shelving and work tables which, unfortunately, I can’t get to because there’s so much stuff piled in front, on top, and all around. At least I can get the car in one side though!

I’m in love with the wisteria flanking either side of the garage. They were in full bloom when we first looked at the house. 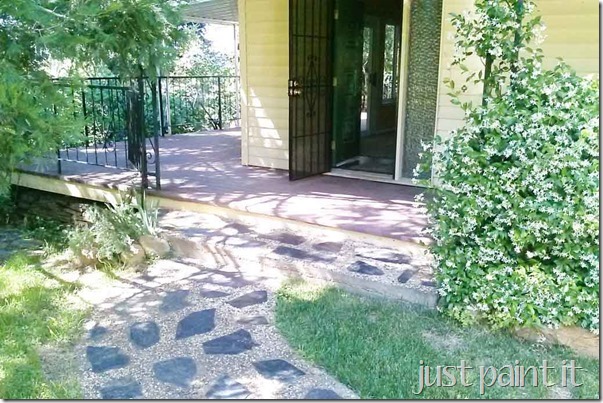 After descending three fairly steep steps there’s a lovely path of pea gravel and slate pavers leading to the front door. The night-blooming jasmine’s scent is simply fabulous. You get an idea of the vast deck that surrounds the entire upper level in this pic. 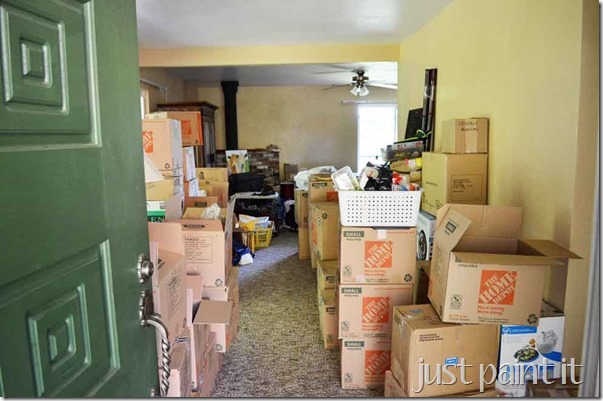 Ahem. You’ll notice I took some of these photos after the move. Some were taken during our walk-through with my phone. Sorry for the fuzzies on those. Anyhoo, here’s the entrance, a nice long room that both looks onto the corner wood stove as well as out onto the covered portion of the deck and the fig & apple trees below. 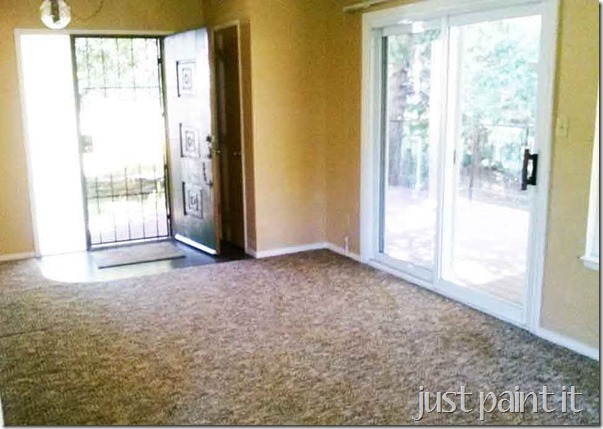 Looking back towards the front door before boxes. We’ll turn this into a nice sitting area because the view is simply gorgeous with the sliding glass door and nice window to the right. 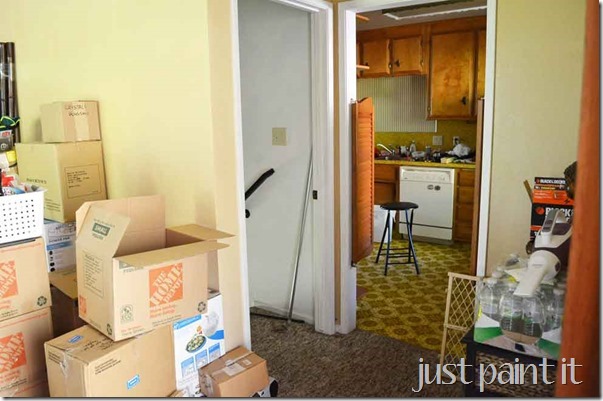 To the right of the front door is the kitchen. Ah, the upstairs kitchen. It’s a bit outdated. More than a bit, mkay? But Mom loves it so I’m just making my to-do list and putting the kitchen list down at the bottom. Fine with me. 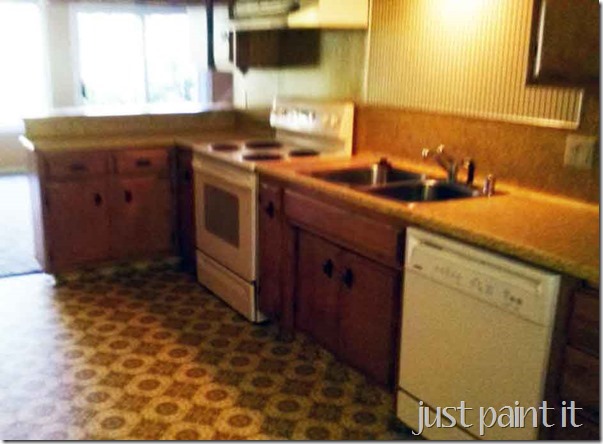 How ‘bout that floor? Only to be matched by the linoleum counters. I know they’re linoleum because we had the exact same pattern at Echo Chalet, only in blue. Yep, 1963 is about right. 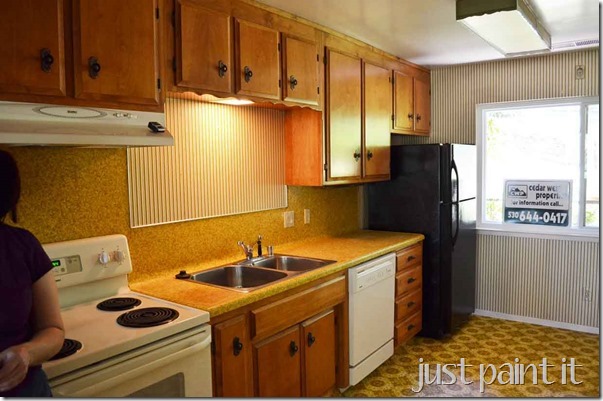 Looking in from the living room. My camera captures a better sense of the true harvest-gold-ness. 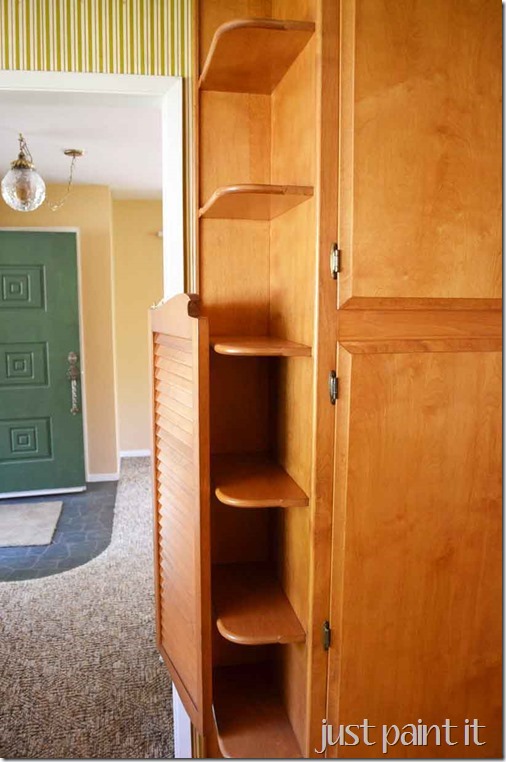 Looking back at the entrance. Lots of fun knick-knack shelves. I’m kidding. The last thing I want in this house is to junk it up. There is a ton of storage so everything should have it’s place, once we get fully unpacked and organized. I’m not sure what I’ll do with these shelves. 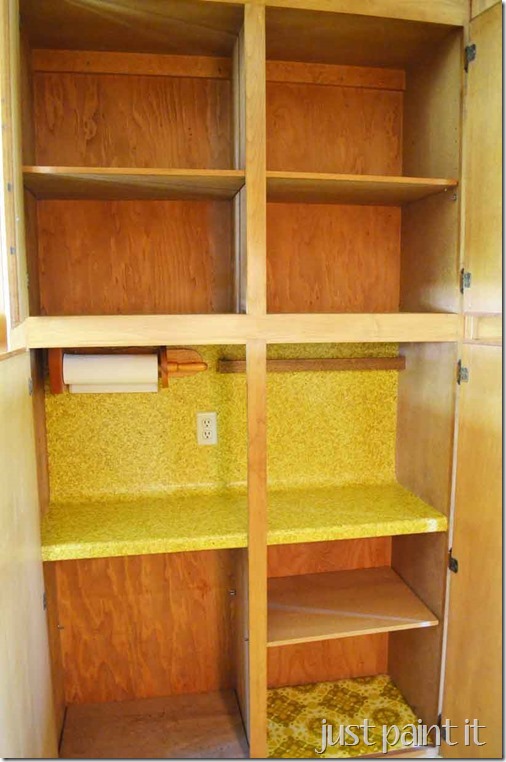 There is a bank of cabinets dividing the kitchen and that first room which was so appealing when we saw all of the cabinet doors. And then we opened them. The shelves are, let’s say, at odd levels. Most very tall and deep. Some equipped with electrical outlets for reasons unknown to us.

Because there is a second kitchen downstairs, I’m not planning on redoing these shelves any time soon. If it turns out that we start cooking and baking a lot, then I’ll rethink it. But for now, it’s just more harvest gold. And electrical outlets. 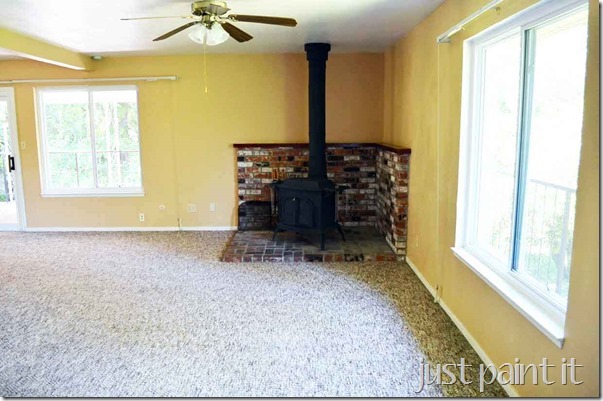 The living room, looking towards the ‘sitting area’ to the left. I drew a floorplan after we signed the lease, took measurements of every.single.wall.and.window. And still we’re debating about certain placements. I’ll probably share the floorplan with you later on because, believe me, this house will become a very familiar topic here on the blog. 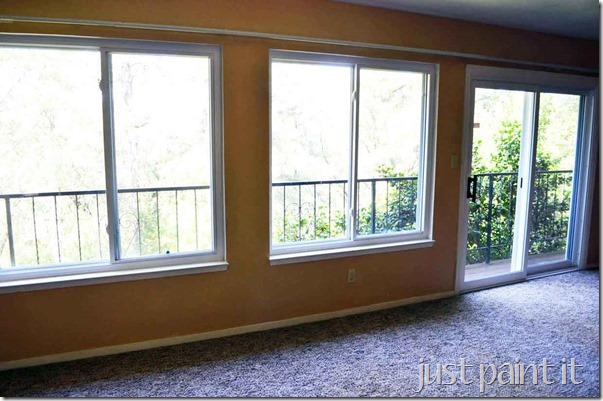 Looking out the living room windows. Unfortunately this pic was taken late in the day when the lighting was poor but you get a sense of the view. 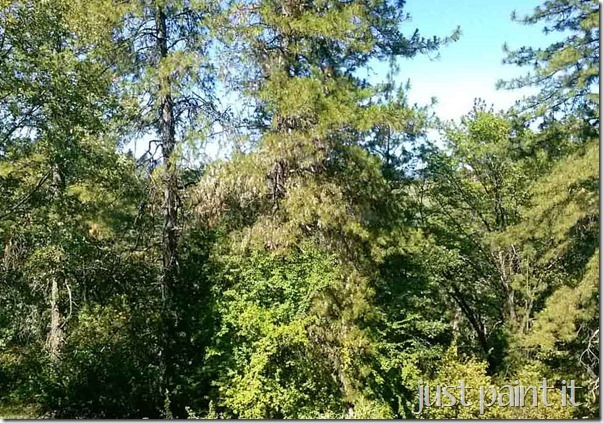 The view from the living room deck. Oaks, pines & cedars, and beyond are some rolling foothills. It’s just amazing to look out every single window and see gorgeous foliage. It’s almost like being up at the cabin, only with a lot more amenities. 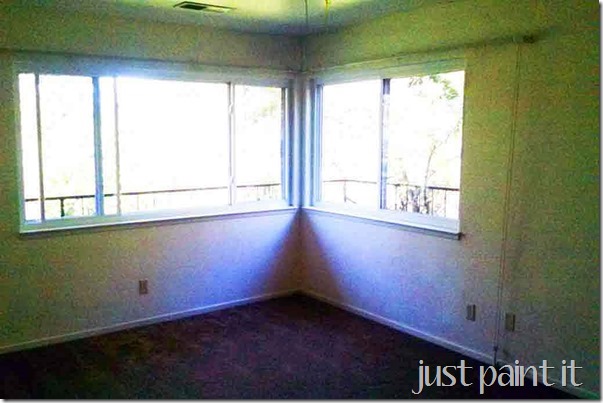 Mom’s bedroom, looking in from the door. 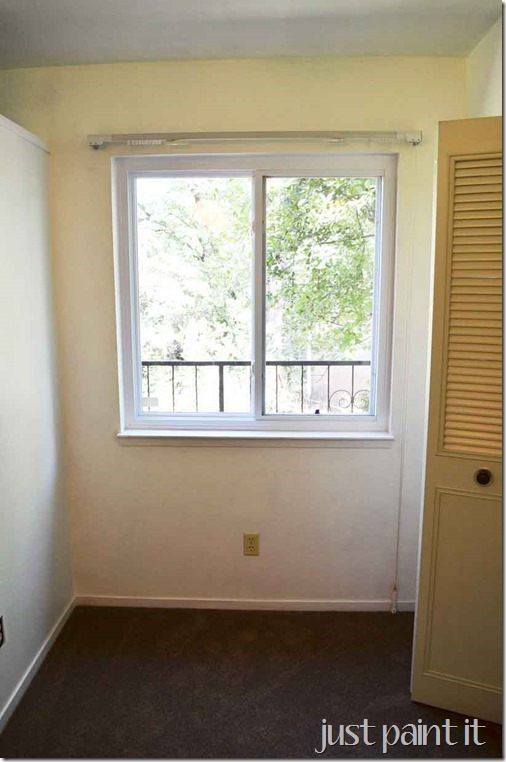 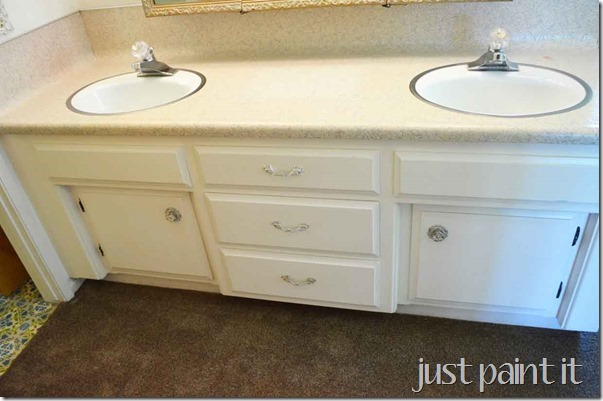 And her funky little vanity. 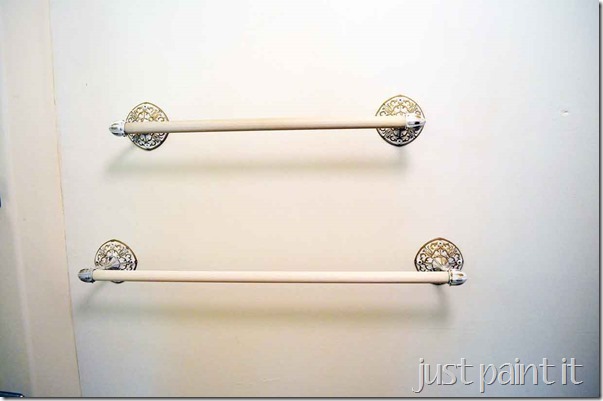 In her bath are these stylin’ towel bars. They drive me nuts but they don’t bother her, so they’ll stay.

As a matter of fact, she loves the kitchen too. I guess that’s the difference between our ages showing, but that’s fine. Since this is a rental I’ll get permission before any painting, although the landlord is super nice. I’ve painted in every rental I’ve ever lived in, and we plan on staying here for a very, very long time. 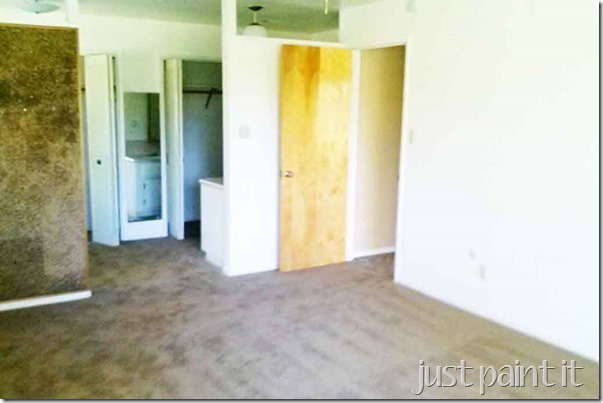 Looking back at the door and dressing area in Mom’s room. See that brown blob on the left? That’s corkboard. Yessiree it is. The funny thing is, this house has a ton of similarities to the last house Marlon and I had. I’ll share those with you a little later on. It’s pretty amazing. 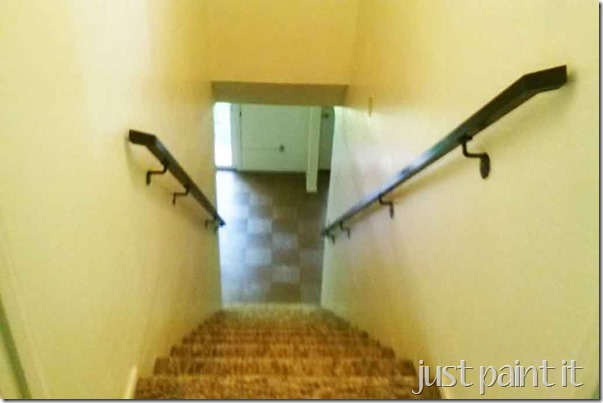 That’s the ‘tour’ of the upper level. Next time I’ll show you my space, the downstairs. These are all “before” shots, of course. But how else can you appreciate the “after” without seeing the before, right?

We still don’t have internet, phone or TV. I know! I’m posting this from the McDonald’s at the bottom of the hill. Internet and phone comes Tuesday. TV, we’re still not sure who we’re going with because we’ve been with Comcast for so long.

While I’m catching up on paint projects, unpacking boxes, and organizing a 2500 sq. foot house, I’ll be posting more about the house. The outside, my to-do list, more about the move, and so on. Like I said, I have a feeling that this house will be a common topic here. There’s loads to do, lots to fix and update, but I can’t tell you how happy we are to be here.