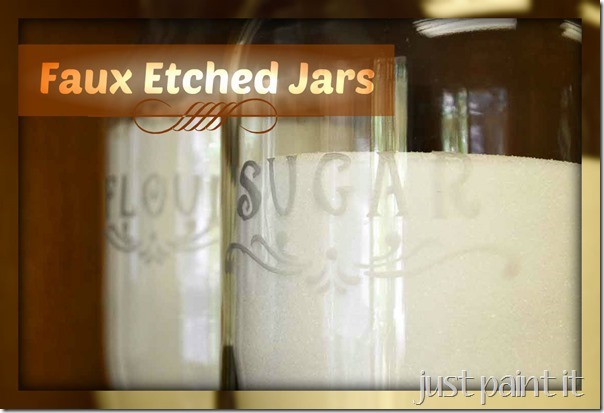 You know those walk-in pantries that have tons of storage and a door with pretty etching on it?

Yeah, well, we don’t have one of those.

With canning jars being all the rage right now, I thought we could use some vintage jars to kind of mimic the look of a pantry. 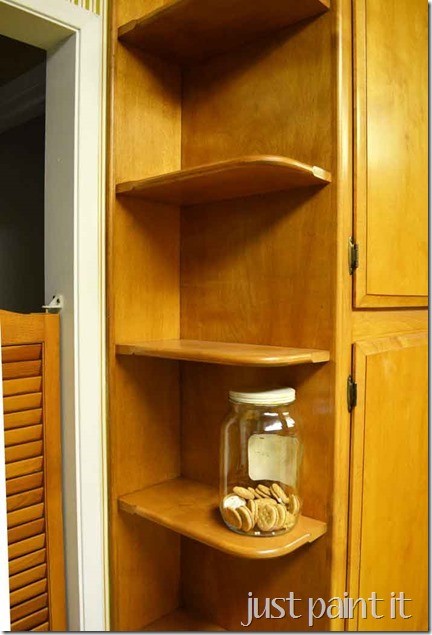 These little display shelves are in Mom’s kitchen and were becoming a little too handy at collecting . . . stuff.

I had mentioned in my ‘tour’ of the upstairs that I wasn’t sure what to put on these shelves and a reader had the great idea of using jars. She also thought some vintage metals signs would be cute too but I haven’t found the right ones yet. 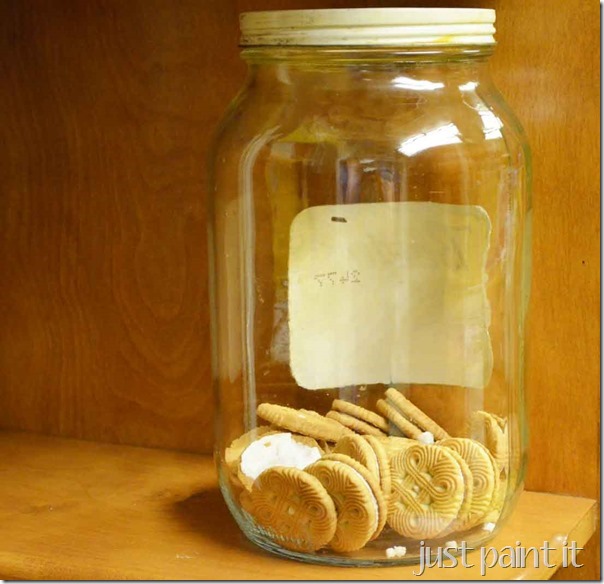 We’ve had these jars forever. As in, over 40 years or more. They’re restaurant size mayonnaise jars that we had from the resort at Echo Lake. Mom used them for all sorts of things through the years but lately they’ve just been collecting dust. 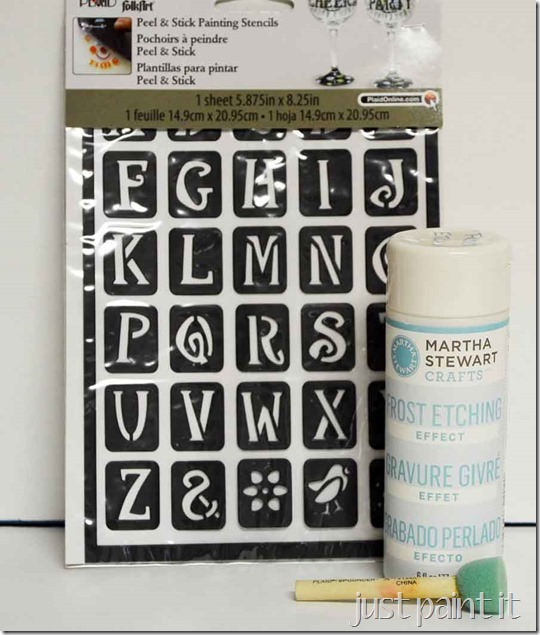 This would work for any jar, even canning jars which are available all over now. For the ‘etching’ Martha Stewart Crafts has a great product called Frost Etching Effect.

Choose stencils made for painting glass, if possible. They’re self-adhesive and flexible so they’ll mold to the jar’s shape easily.

Tip: If you’re using stencil letters, check to see how many letters are included in the package. You may want to pick up a second package to ensure you have enough letters for the words you’re stenciling.

You can use a foam pouncer but I’d recommend a make up sponge instead. They’re more compact and you’ll get less air bubbles. 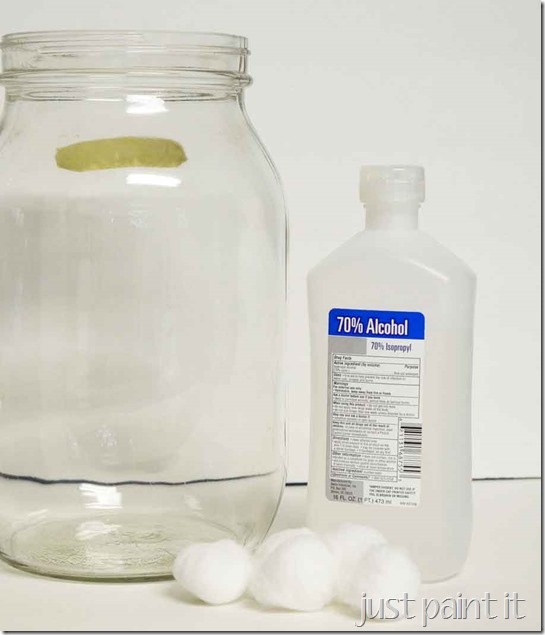 Start by washing the jar with soapy water and let dry. Next clean the area to be painted with rubbing alcohol and allow it to air dry. 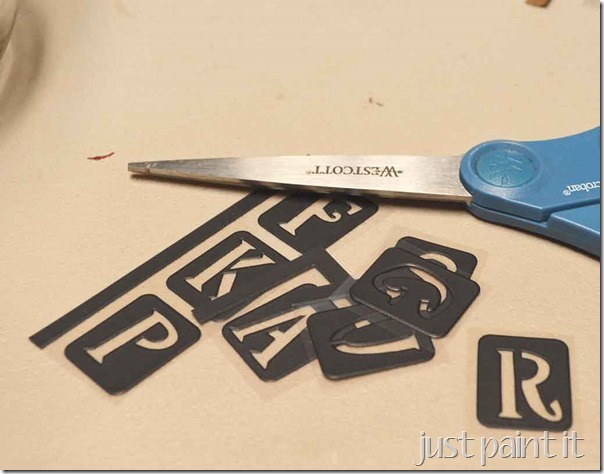 Cut the stencil apart so you’ll have each individual letter. 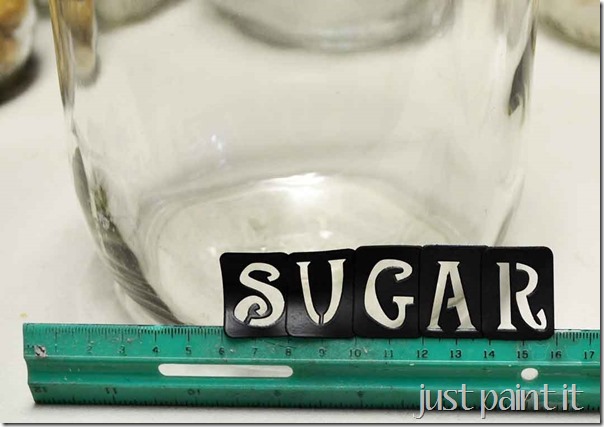 I tried to line up the letters by adhering the very bottom to a ruler. . . a straight ruler . . . for a curved jar. 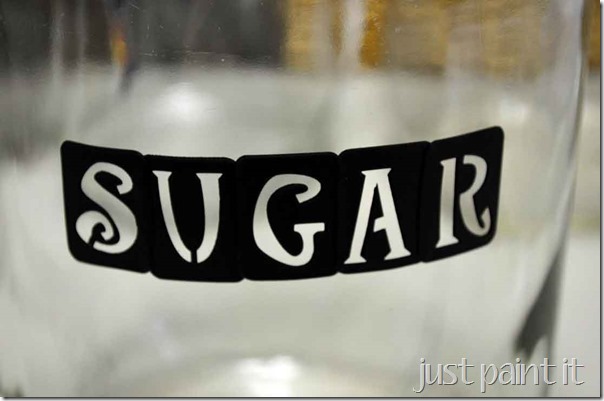 It looks like the tops and bottoms are fairly even, except for the “u”, doesn’t it? So, not so bad. 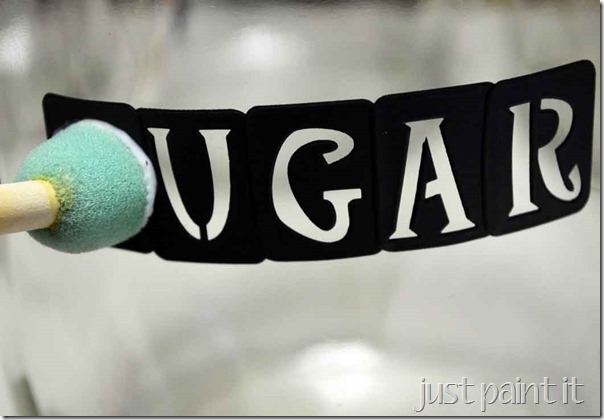 Then I pounced a light coat of Frost Etching on. 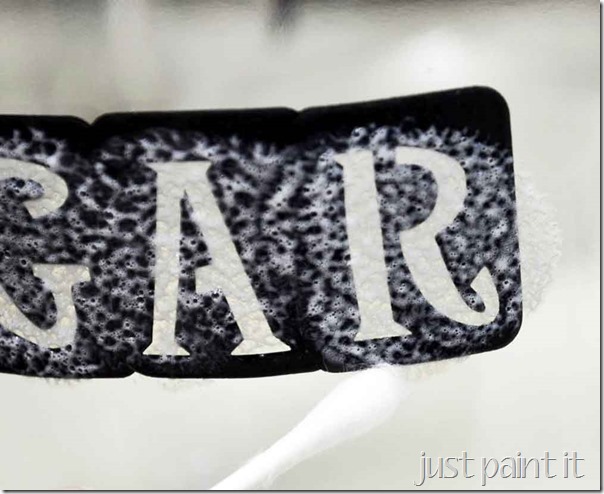 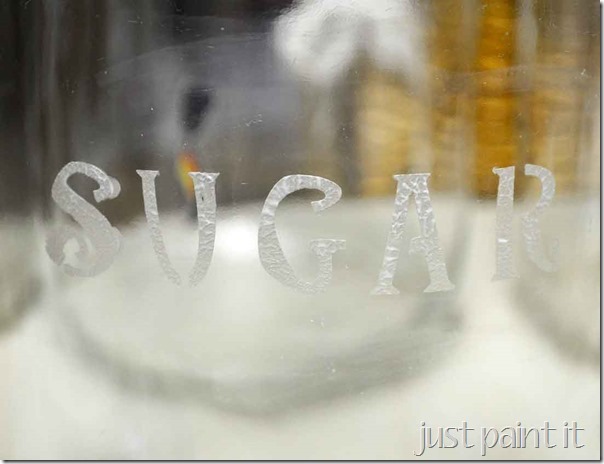 Rather than faux etching it looks like, I dunno, little pieces of tissue paper or something.

Plus, I was wildly underwhelmed with just the lettering. I wanted a little more pizazz. 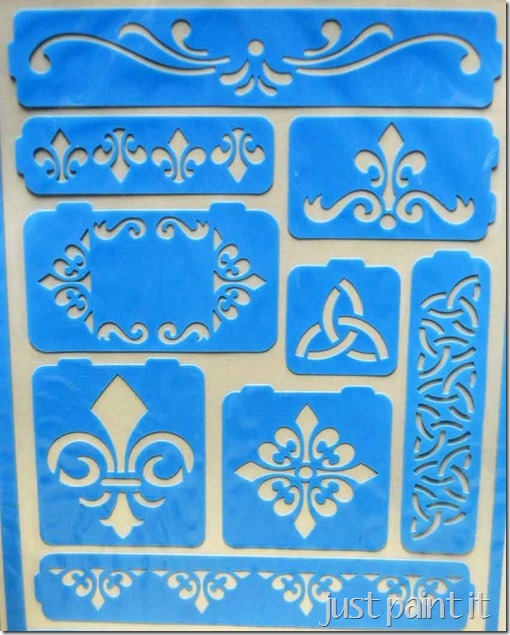 In my stencil stash I found these flexible, self-adhesive ornaments. Perfect.

Now I’ll show you the ‘right’ way to stencil a jar. Or, at least, the easiest way for me. 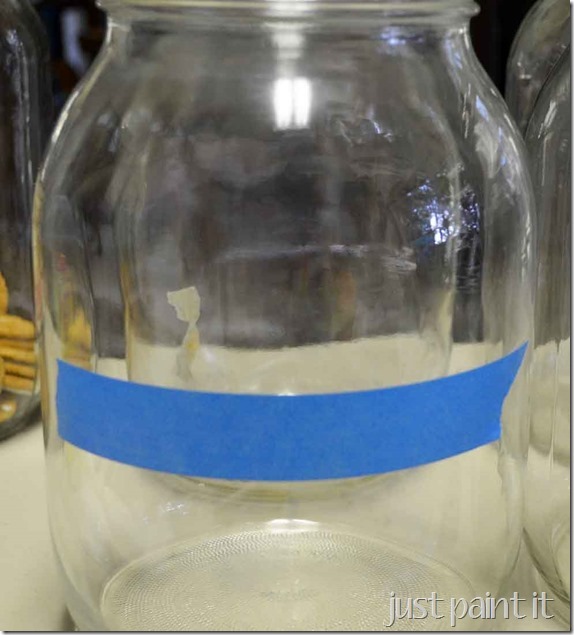 Put a piece of painter’s tape where you want the lettering to go. This not only acts as a ruler for the letters, it’s also helpful if you’re stenciling more than one jar and you want the words to be in the same position on each one. 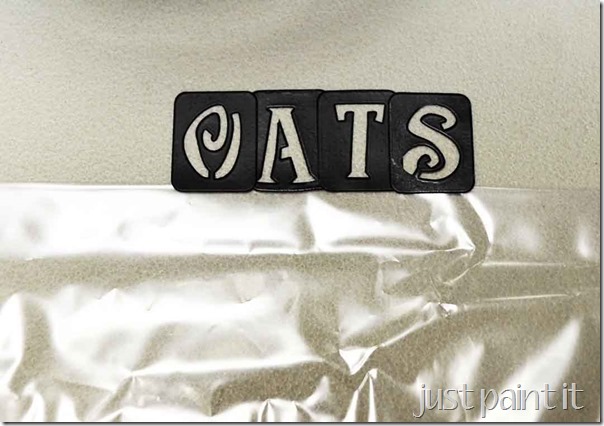 To line up your letters, use a plastic baggie. Flexible, so it curves around the jar.

Also, carefully trim the individual letters’ sides so there isn’t so much space between each letter. 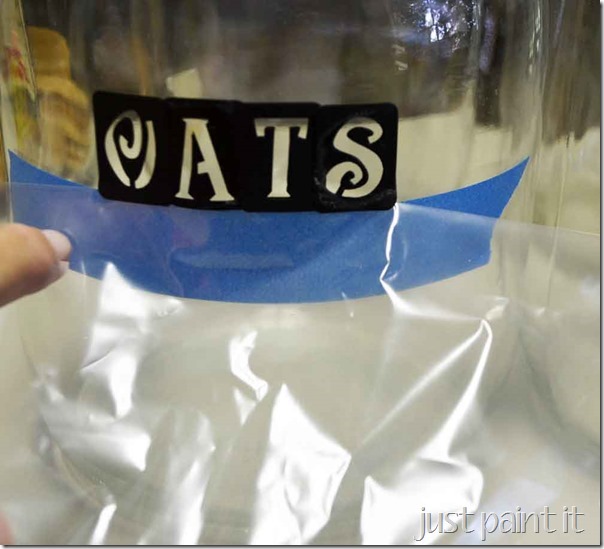 Line up the baggie with your tape and press down all parts of each stencil.

Don’t shake the Frost Etching bottle. Instead, roll it back and forth on the table to avoid excess bubbles.

Use a makeup sponge to apply the Frost Etching and you won’t have any bubbles, or very few. 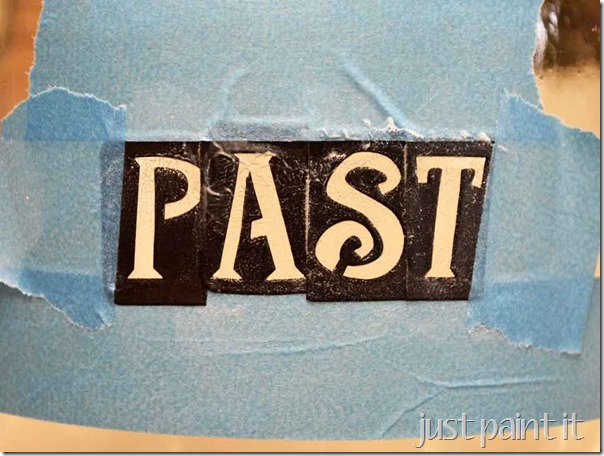 Apply strips of painter’s tape around the entire group of letters to avoid any over-painting.

This’ll save you loads of time cleaning up with a cotton swab later. 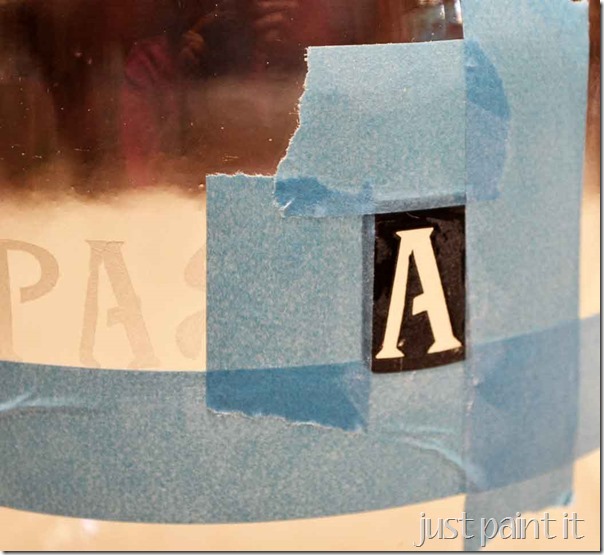 If you don’t have enough letters for a word, allow the first group to dry fully before adding the additional letter.

These are very light coats so it doesn’t take too long – maybe an hour or two.

You can probably get away with only one coat. I did some jars with two coats and some with only one and you can’t tell the difference between them. Place the used stencils on a sheet of wax paper instead of the tiny little acetate squares the stencils were packaged on. Then clean with a damp cloth or paper towel.

I don’t know if Frost Etching is dishwasher safe. If you find out about it somewhere, please let me know.

I will say I ‘etched’ a vase a couple years ago and washed it by hand and it held up fine. 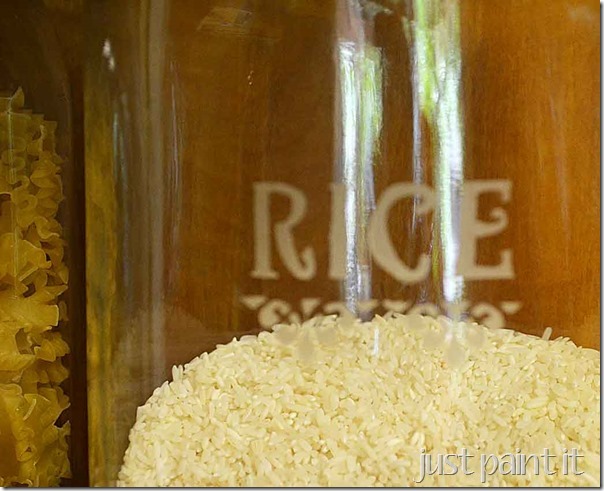 I love the little flourishes or ornaments under the letters. 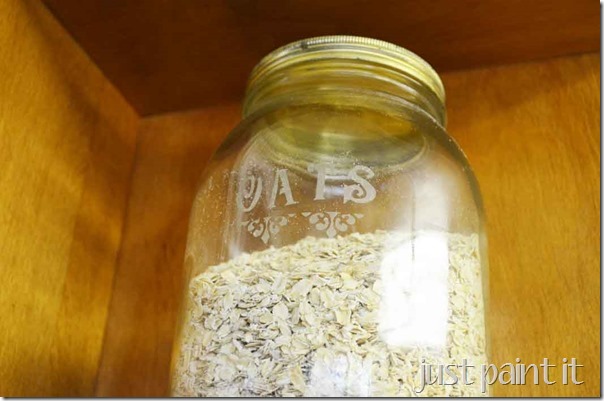 Although they don’t show up with some ingredients. 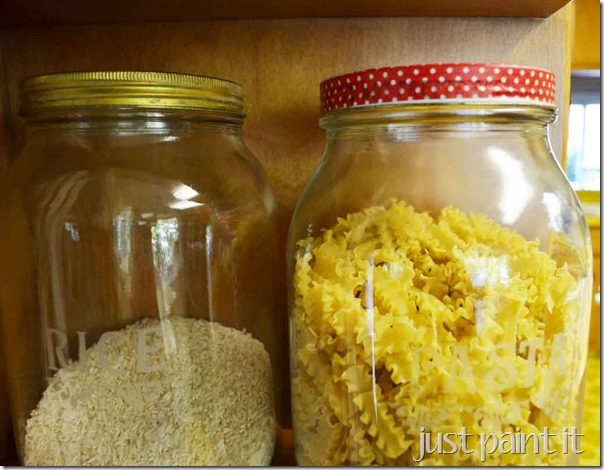 I’m debating on the lids – paint them, add some washi tape, or leave old and worn as they are now. The washi is cute but I think it might unravel pretty easily. 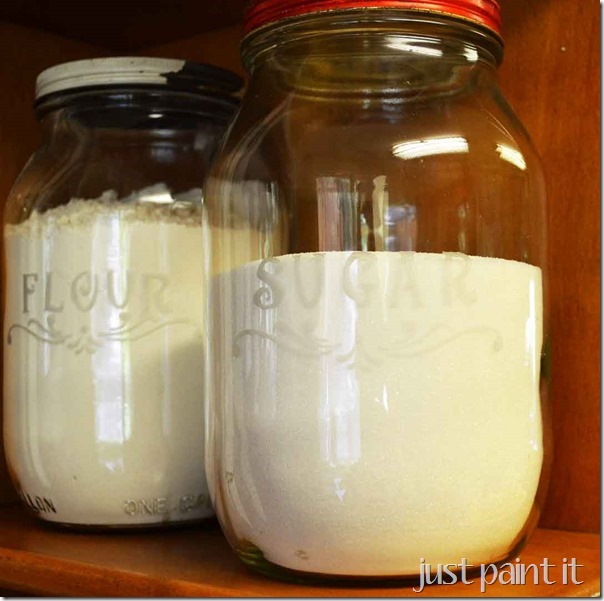 They sort of have that ‘pantry’ look, dontcha think? 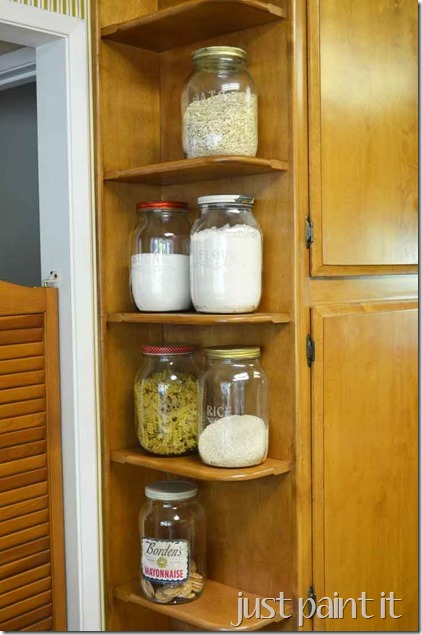 No more knicky-knacky-stuff on the shelves! 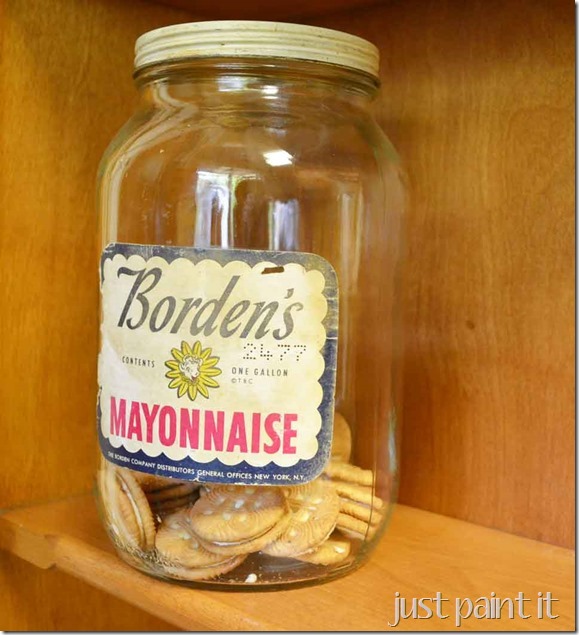 I left this one alone. It was the only one with the original label and I love it. 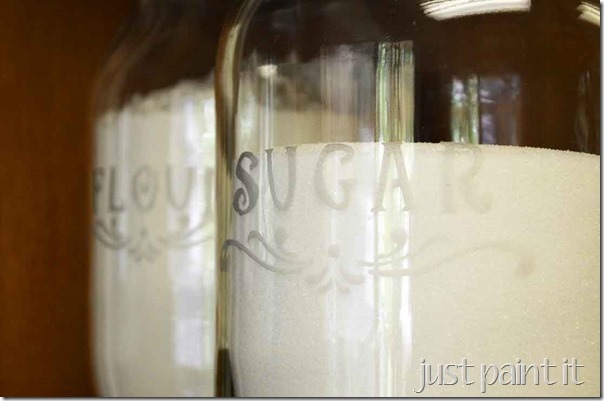 What do you think? Can’t you imagine some fun holiday projects with the Frost Etching? Or even as gifts? Let me know what you come up with!