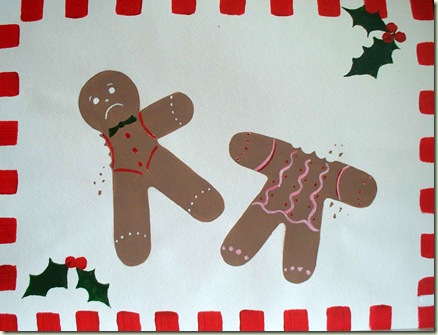 When I worked as a floral designer and had to design tons of wreaths every Christmas – and I mean TONS! – I had to come up with all kinds of different themes.

It all depended upon what the store owners bought. I’d never know what theme I’d have to use until the freight boxes were opened.

Most of the time it was fun.

Most of the time. I mean, who wouldn’t love opening box after box of Christmas decorations. And it was my job to use all of them in ways that would inspire shoppers to buy a whole new line of decorations.

Every year, though, there’d be one line of merchandise that was not so cute. We had a word for it. A frequently used one. . .

Spelled ‘fugly’. A combination of ‘ugly’ and another, umm, adjective.

We’d shake our heads and wonder how in the world those ‘fugly’ things were gonna sell.

“Oh, Colleen, you’ll come up with something!” the clerks would utter as they’d slink off to far corners of the store to avoid hearing my grumbling.

Christmas 1999 was one of those years. The Millenium. The big 2K. The World as we knew it was coming to an end, or gonna crash, or be hit by a meteor.

One craft store in Fair Oaks, California, should’ve been the recipient of that meteor. Or at least the 2 Harvard-schooled men who bought an entire line of bright blue Christmas tree ornaments with glittered silver ‘2000’ on all of them.

Ever been to a craft store at Christmastime? Ever seen lots of blue?

No, that’s because people don’t decorate with bright blue for Christmas. Hanukkah, yes, not Christmas.

And, correct me if I’m wrong, but I don’t see a whole lot of decorations for Hanukkah in stores.

But then, I live in California, too.

I don’t think it’s because of my fantastic ‘talent’ as a display designer. The tree was over-the-top tacky. Silver lame fabric, blue feather boas, silver tulle netting with sequins crammed into every gap between trunk & branch.

When you decorate a tree for retail you have to stuff it full of products – not just ornaments. That’s because, even though right next to the tree there are bushels and baskets and racks of exactly the same dang ornaments that are hung on the tree, shoppers pull ornaments off the tree!

By the end of the day, the trees looked like they’d been plucked clean by birds.

We even sold out of silver lame and blue feather boas that year.

My only explanation is that some people obviously thought the world really was going to come to an end and just once they were gonna have a bright blue & silver Christmas.

Either that, or all of their taste was in their mouth.

So every year, when I finished using all the merchandise I had to use, I’d get to design things I actually liked.

My favorite was always a Gingerbread theme. Kids loved it too.

Or one of the simplest, but cutest decoration, was an oven mitt stuffed with a branch of pine garland, some cinnamon sticks, wooden spoons and any ornament I could find.

This time of year I always miss working in the craft store, even though it was utter craziness.

I first thought about a simple Gingerbread Man and maybe some candy canes. Until I read PioneerWoman one day.

You could paint this faster than actually baking some gingerbread cookies.

It won’t taste as good, but I guarantee it’ll last longer. 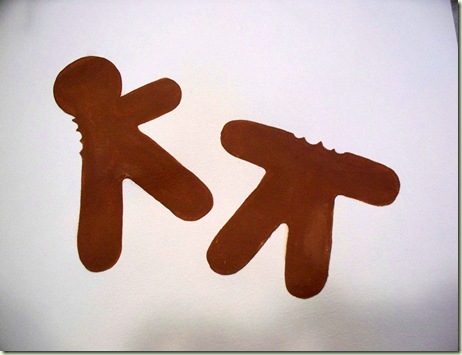 Use any medium brown and paint your gingerbread shapes. No shading. No highlighting. 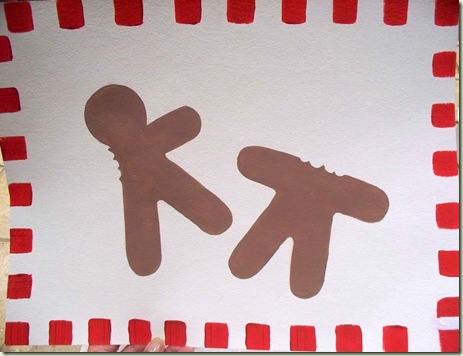 While the brown paint is drying, paint some red squares around the edges. 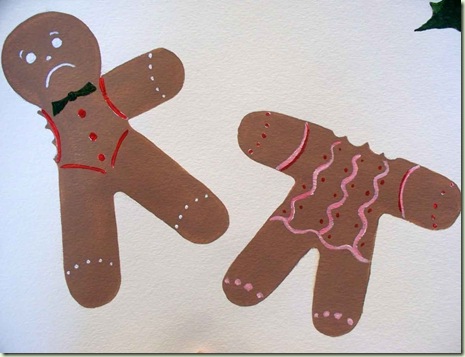 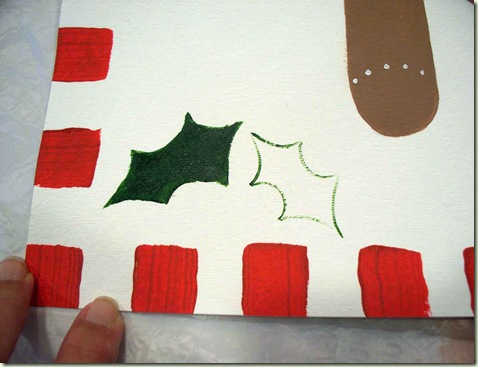 I added some holly leaves & berries. 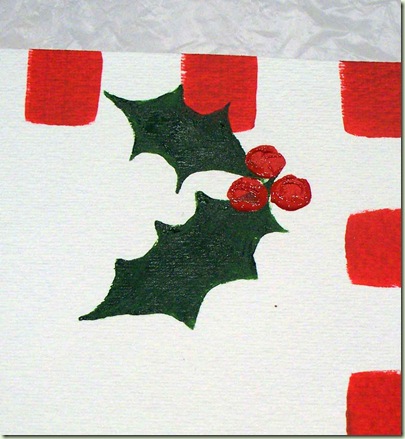 As an afterthought, I added some ‘crumbs’. 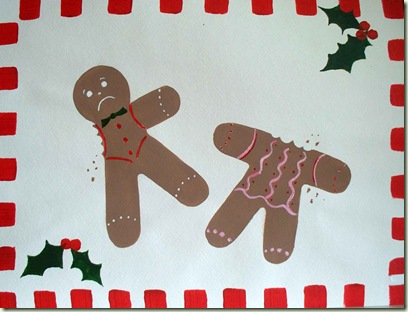 I resisted the temptation to write “Bite Me” across the top.

But if I was going to decoupage this on a cookie plate, that would work, wouldn’t it?

But not on an apron or tee-shirt.

Not exactly the holiday spirit.

But cute, just the same. 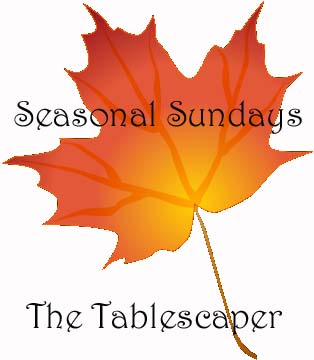