This is the 3rd installment of my trip down memory lane when I owned a flower shop in Sacramento, CA. Part 1is here, Part 2 is here. The story continues as my wholesaler graciously becomes my floral tutor.

His name was Al. He had owned his own florist shop for years, retired, then came out of retirement to work at a floral wholesaler.

Truth be told, I think he took a little nip now and again on the job. But I didn’t care. Al saved my life.

Or, at least my ‘floral’ life.

If memory serves, he said something tactful like, “You don’t know what you’re doing, do you?”

He was discreet about it, though. He waited until all the other florists were out of earshot when he said it.

I immediately ‘fessed up and told him my dilemma about the upcoming funeral and the four arrangements.

He didn’t laugh. Not even a smirk.

‘Course, no tellin’ what he told his co-workers later, but from that day on he became my personal floral design tutor – on the sly. 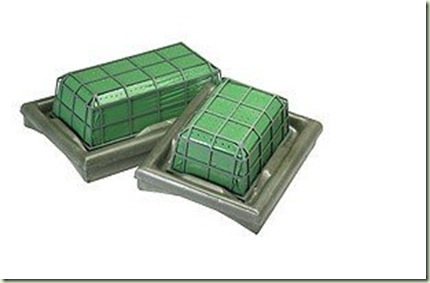 First off, he took me back to the funeral accessories for these little goodies called ‘casket saddles’. Who knew?

And this was just the start of wonderful tips and tricks Al shared with me over the coming months.

Oh, and the ‘bleeding’ stuff? 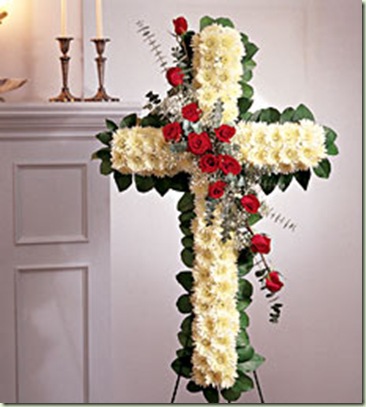 Just a spray of red roses coming out of a white flower background.

Al taught me that funeral flowers only need to look good for that day so florists use regular ol’ Styrofoam to stick the flowers into.

I felt soooo much better! Al had given me enough info to where I thought I could actually pull off arranging the four funeral sprays.

Since the woman had now actually died, I also knew the date of the service.

I also grabbed all the supplies –

Oh, didn’t I mention that? Yes, after his mother-in-law passed away, my landlord added to the order –an orchid corsage with a ribbon emblazoned with the message

We love you, Grandmother

A c-c-corsage? To pin on the woman?


Who would be lying IN the casket?

There! Done! Now it’s just a matter of sticking flowers into foam and getting them delivered at least one hour prior to the service.

Well, just one teensy-weensy problem – since the woman died during Mother’s Day week (the biggest floral holiday of the year) there were no white flowers to be had.

No white flowers for the bleeding heart.

Or the other bleeding heart.

Now, what the heck do I do?