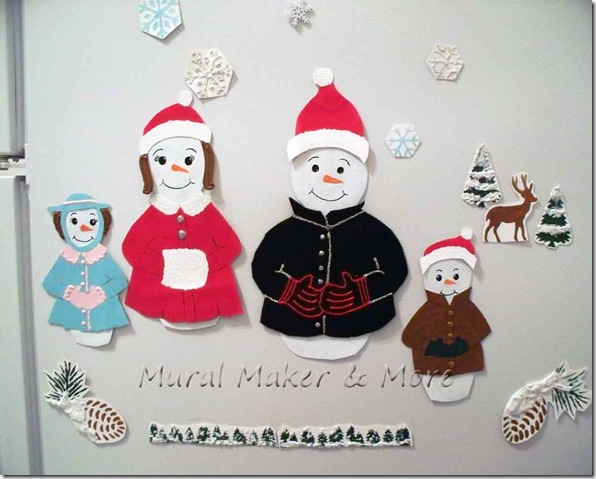 Did you ever play with paper dolls when you were a kid? Do your children? Or do they just hop on the computer now and use the ‘digital avatars’ like my grandson?

I gotta tell you, I had a total blast creating these Snowman paperdolls. (I’m thinkin’ I must not have had paper dolls as a child ‘cause this was just waay too much fun.) Actually, though, I made them for my grandson to play with when it’s raining outside.

Plus, I was thrilled to partner with Plaid Crafts again and try out some of their Martha Stewart decorative paint line. Once again, I received a goody box full of paints, stencils and different mediums so I challenged myself to see how many of the products I could use in one project.

Um, apparently, quite a few! Not that you need all of them to make your own Magnetic Snowman Paperdolls though. But it was fun to experiment with a lot of them.

Like the Magnetic Paint Effect I used for the Snowman Scene the other day. That’s what really started the whole ‘magnetic paperdoll’ wheels turning. 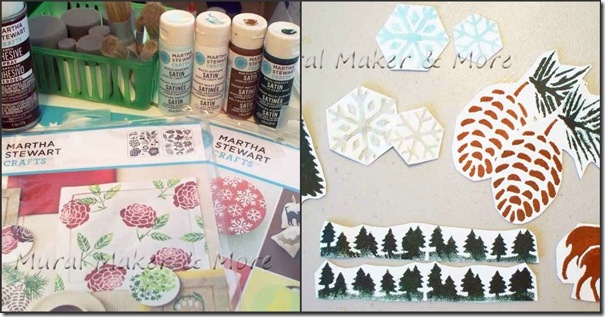 And I actually may be becoming a stencil convert, thanks to Martha’s designs. What a time-saver for painting little ‘extras’ for my snow scene.

Oh, and it’s a great week to grab some Martha Stewart paint at Michael’s too. It’s 30% off! (I’ll meet you there!)

Now, I would’ve been perfectly happy with some stenciled trees, snowflakes & pinecones. But there was a jar of Stucco Paint Effect in my goody box. Gee, I wonder how this stuff works . . .

Cool! I love the texture it adds. I wanted to add different textures to the Snowmen Paperdolls for my 4 year old grandson. You know how little boys love touching absolutely everything!

But the color was a little . . . blah. Then I read the directions. Yeah, I know – use first, read later. 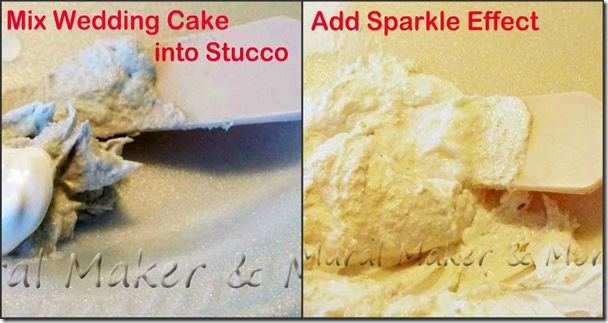 This time I added some paint into the stucco and mixed it up. Why stop there? How about some bling too? Easy-peasy with Martha’s Sparkle Effect – the same stuff I used on my PB Knockoff. 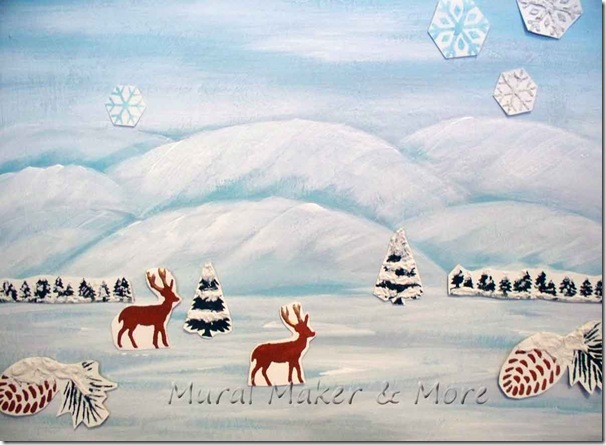 Now the trees and pinecones have some texture and sparkly snow!

I used a palette knife for the pinecones and for the smaller trees, I used the end of a paintbrush. It actually doesn’t take that long to dry either, depending on humidity, temp, etc. where you live. 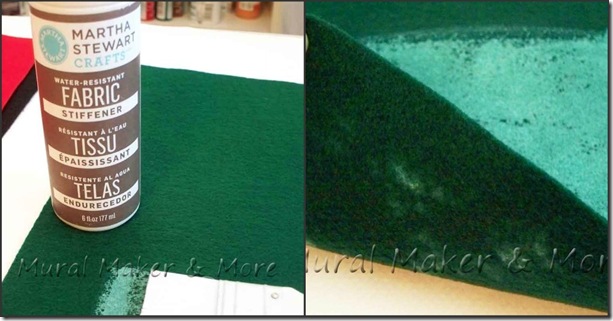 Martha also has some Fabric Stiffener in her line that I brushed on one side of felt squares. I wasn’t sure if the soft fuzzies would be gone, but they’re not. Now the felt is stiff to hold up on a magnet, but soft enough to give an interesting texture.

If I had more fabric, I would’ve thrown that into the mix for my Snow Family’s clothes, but I wound up just using felt and painted canvas.

But first, let’s paint some snow people. (Links to patterns are at the bottom of this post).

Since I was fashioning a wardrobe and accessories for each member of the family, I transferred the patterns onto artist canvas to keep the dimensions accurate. Then I applied a light turquoise-blue, Surf, and let it dry. Next, a coat of white, Wedding Cake by Martha.

If you want a little more texture for your snowmen, use a stencil brush and pounce another coat of Wedding Cake. Then add their faces.

I had already painted their faces on when I got the idea to make different expressions for Grandson to play with. But I can still make ‘em and he can just put them right over these, right? 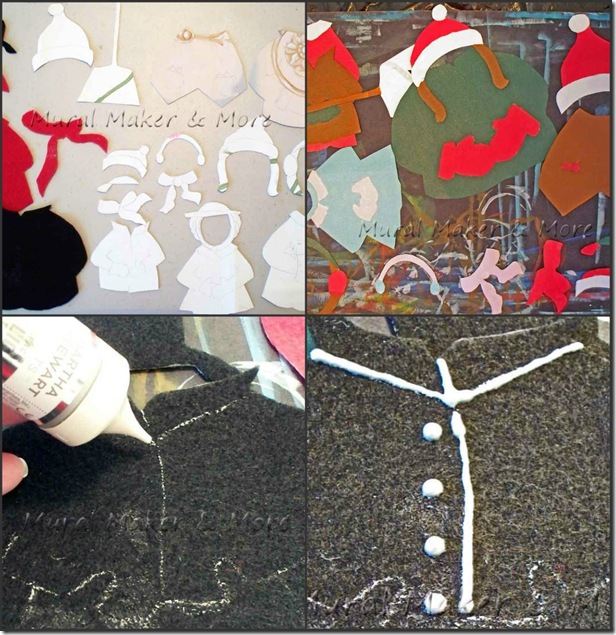 Except for the stiffened felt all of the clothes and hats were cut out of artist canvas and then painted. But you could use fabric or cardstock too.

For even more detailing I grabbed Martha’s fine tips that screw right onto the paint bottles. Instant puffy paint! Buttons were a snap. 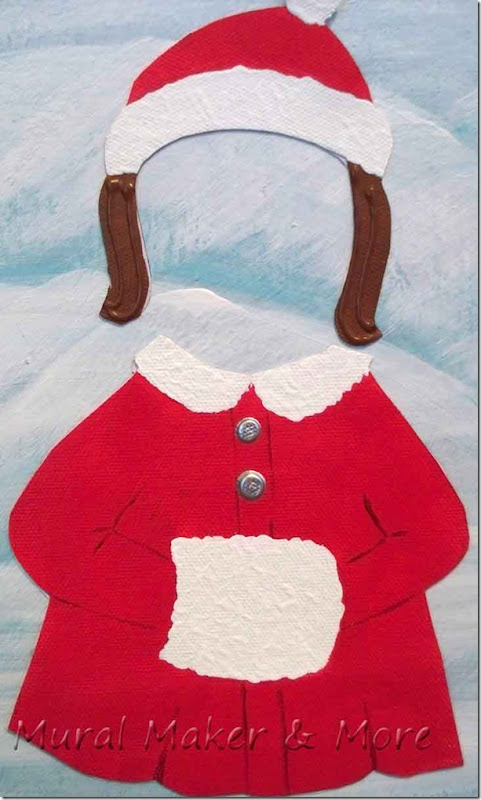 And a couple of curved lines made some hair for Mama. (Or, for my grandson, Gramma!)

For her hat, collar and muff I just gooped on a generous amount of Wedding Cake and smooshed it around. I’m serious! Martha’s paint has a wonderful consistency – thick enough to make impressions but not too thick.

Once all of the wardrobe was painted and detailed, I was ready to attach magnets. 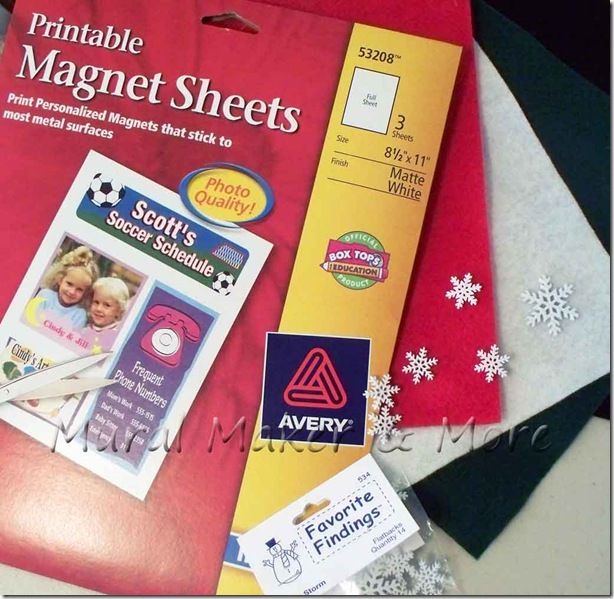 I got these sheets at Walmart for about $6.

Now, I could front and let you believe that I actually knew what I was doing for attaching the magnets. But where’s the fun in that?

It took me a few tries. And then a few more. (I should’ve paid more attention in Science classes.) 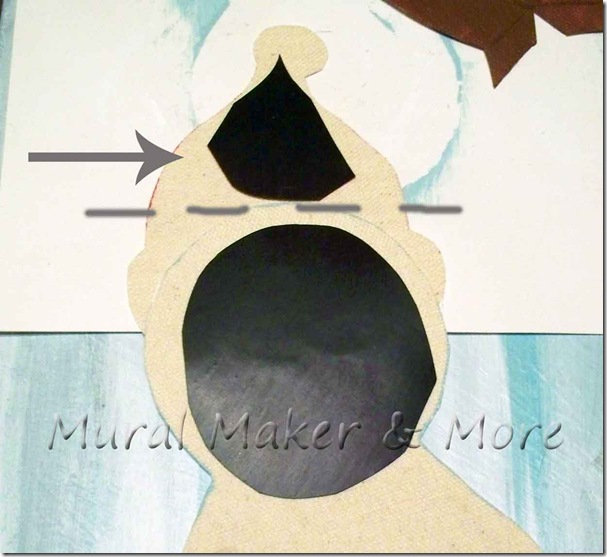 As in, I tried ‘piecing’ the magnets on the backsides. First with a glue gun. Then with Mod Podge.

Uh-uh. The magnets wouldn’t hold, either on my magnetic Snow Scene or the fridge. Then I got the idea to cut out an entire piece of magnet sheet for each coat or jacket. I broke out the Mod Podge again and after doing one jacket, I knew there had to be a faster way. 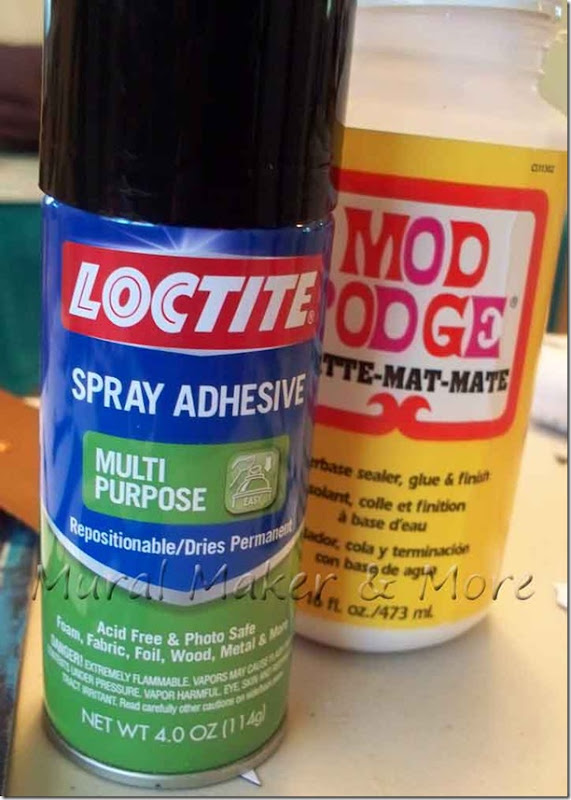 Ah, yes. The spray adhesive worked like a charm and the entire wardrobe now has solid magnet backing. 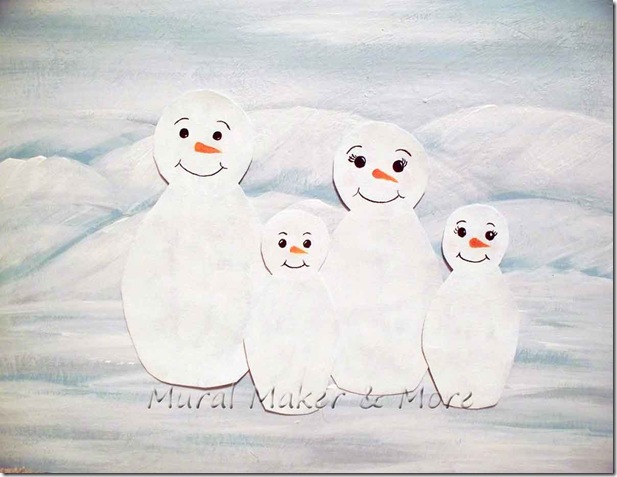 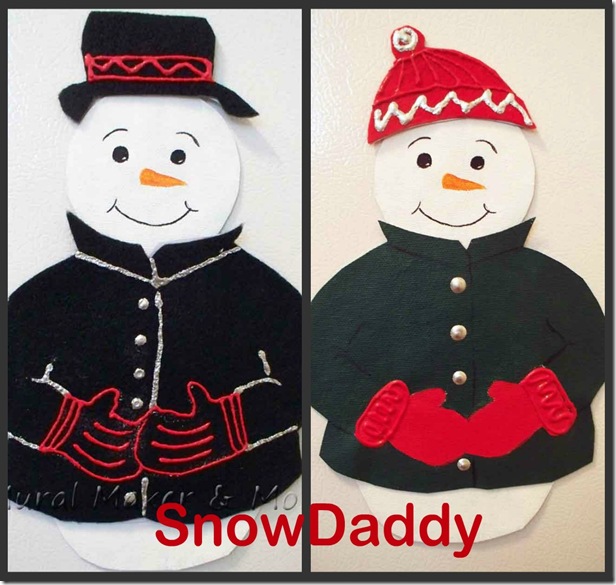 SnowDaddy has a felt hat & jacket on the left and painted canvas on the right.

Can you see how the fine line tip makes the details pop? I’m so in love with those things. 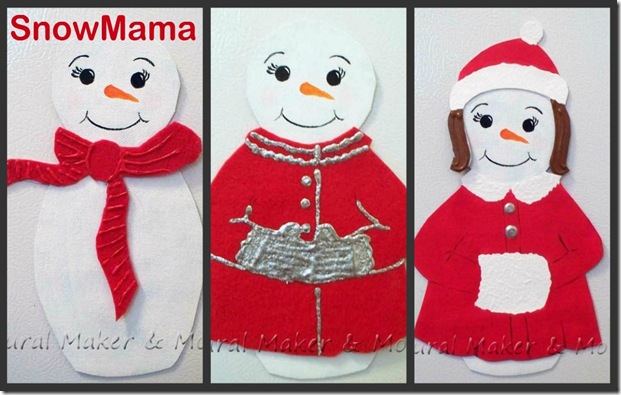 And SnowMama – with or without hair, haha!

Yes, I had too much fun making these guys. 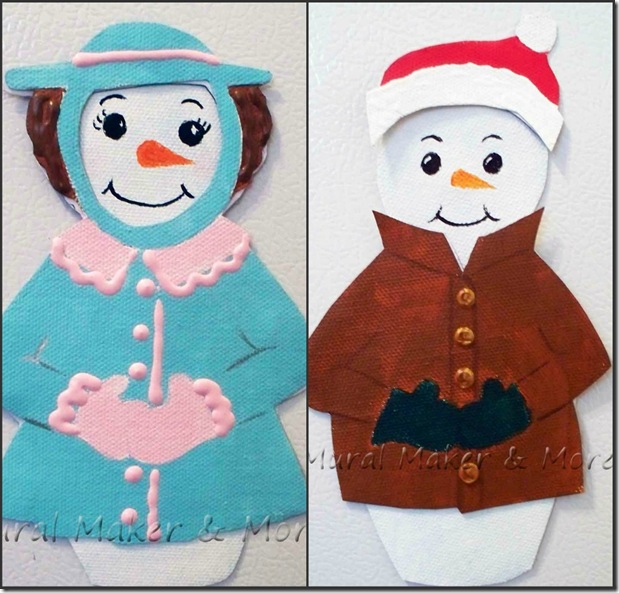 But here are my favorites – L’il Sis and Brother.

I am so digging the different hairstyles. I’ve gotta create a few more! 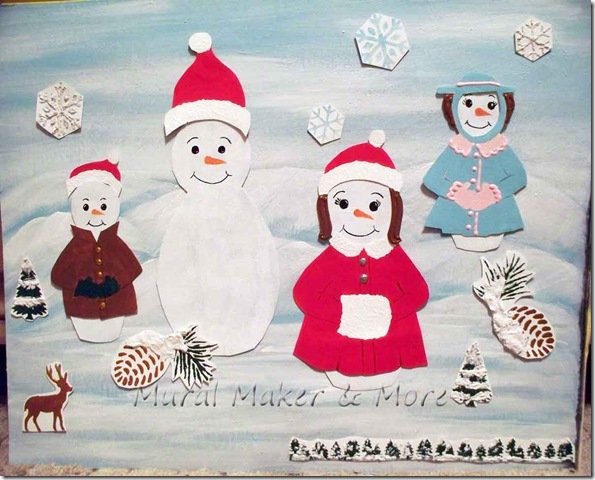 Here’s the whole fam-dam on the magnetic snow scene . . . 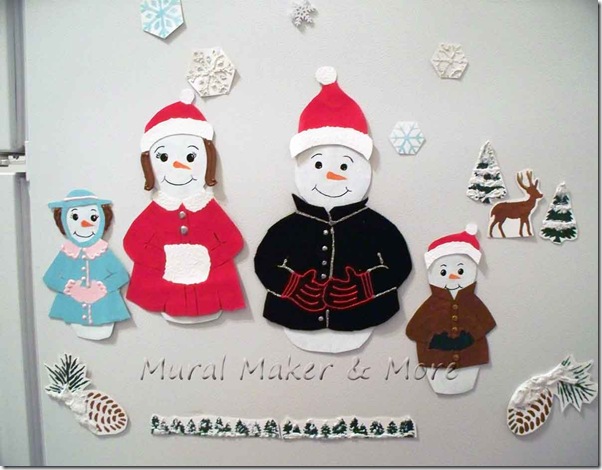 What d’ya think? I’m thinking I want to make some more accessories, that’s what.

If you’d like to make your own snow family, I posted snowmen printables here.

I will say this, next time I’ll just paint directly onto the magnetic sheets. No, I won’t get the felt texture, but it’ll save time and increase the ability to stick. Felt’s a little thick for the magnets, I think. And, Martha’s paint will work on the magnetic sheets. I’m not sure about other paints, but I know hers will work.

So you could just print out the patterns directly onto the sheets, cut and paint! Fun, huh?

I can’t wait to see Grandson this weekend and see how he arranges everything. And get him off the computer for a minute or two!

I received product and payment for this post – all opinions and painted projects are my own.

Check out some other great projects using Martha Stewart paint by Plaid!