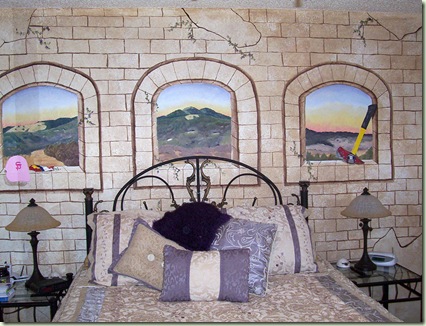 I’ve said before the cool thing about painting commissioned murals is the fact that I can make them personal for my clients. It’s like going to the hairdresser – they take an hour to do your hair, but you’re the one who has to live with it!

Same with painting. I don’t always agree with my clients’ choices. Or, at least, it wouldn’t be my style choice. But it’s their home, and I always try to honor that.

Huh? Well, um, okay. What about the color for the walls? They wanted something muted. Actually, that’s not right. They wanted it to feel almost like a cave or the inside of a castle, but not too dark. Seriously. That’s what they said.

So the first thing was to apply a simple color wash over the walls. Then add some grout lines & cracks. 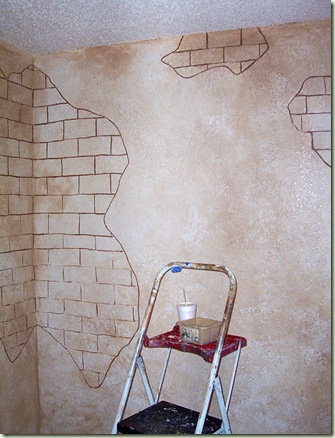 For color washes I simply mix paint with glaze and water then apply it with rags. A little on, a little off. When the walls have ‘knock down’ texture, it’s even simpler because the texture adds another dimension.

I bring in the Hubster for color washes. At 6’4”, he can really rock! Plus, even now, I still tend to get too artsy-fartsy and take waaay too long. 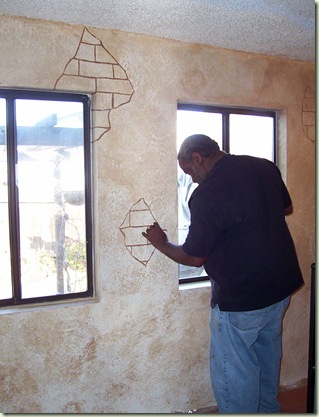 I even let him ‘line out’ the faux brick. He was a little nervous, but he did just fine.

Next came the three arches over the bed with the mountains. They didn’t want the arches to be exact – more freeform, which worked for me. 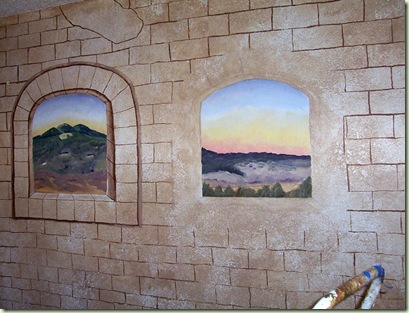 Once I had the arches lined out, I painted in the mountains. She wanted a slight sunset because that’s what you’d see if there were actual windows on this wall.

Next came the touches of purple. Just a few loose vines peeking out of the cracks with purple posies did the trick. 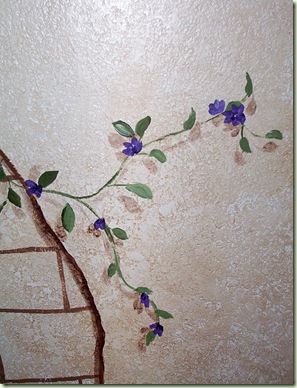 If you add a little watered down shading under the vines, it makes them look dimensional.

Then on to ‘her’ side. Now, the San Francisco Giants team colors are orange & black. That wasn’t going to work here. But she had a little baseball cap that was pink. Perfect! 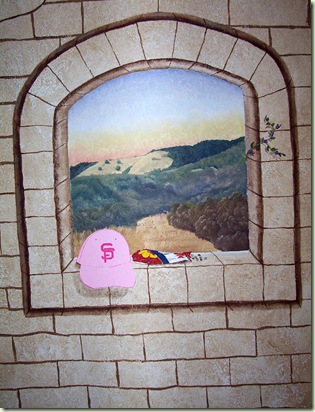 The sunflower seeds were my added touch. I’ve never been to a baseball game without them. 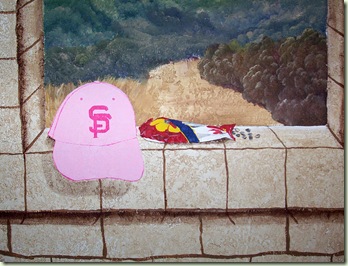 For ‘his’ side it had to be something from his work. He brought me his actual ax that he’s used for 30 years. Darn! I wish I had a picture of the actual thing. But you get the idea. 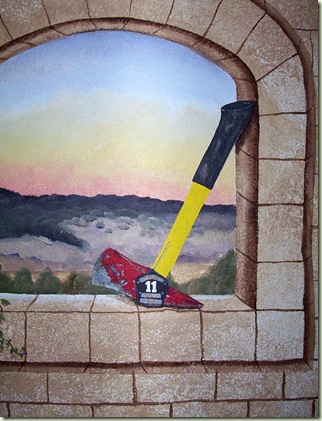 The red paint had chipped from his many wonderful years of saving others. I also added his shield as a surprise. 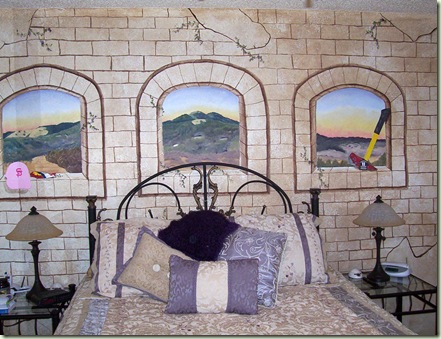