I coined this phrase yesterday – Lazy Gal’s Guide to Decorating – just as a passing thought.

And when I thought about it a little more, I have to admit, I really am lazy when I decorate – especially for myself.

I think the key, though, is that it doesn’t look lazy when I’m finished.

I barely managed to get the fall decorations out of the garage so a glue gun and scissors were just out of the question this year.

I had enough stuff for a few areas. I did the table yesterday.

That left the fireplace mantel . . . 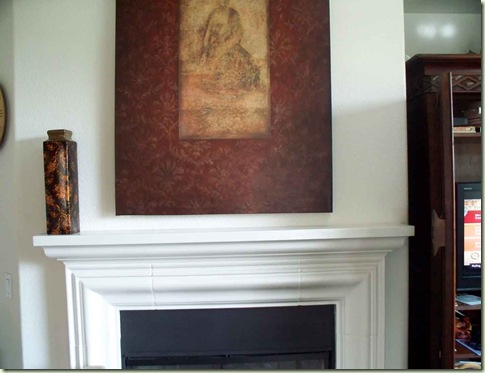 And this little chest in the entryway. 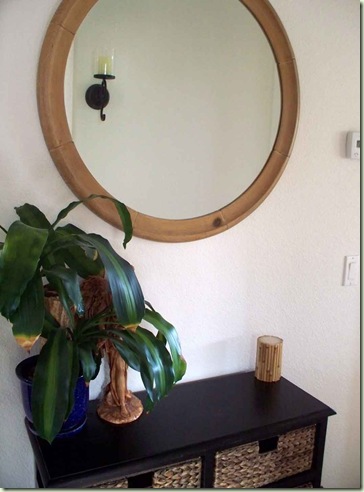 I hunted around for some fabric for pops of color.

I found this runner rolled up and used it as a base for the fireplace mantel. 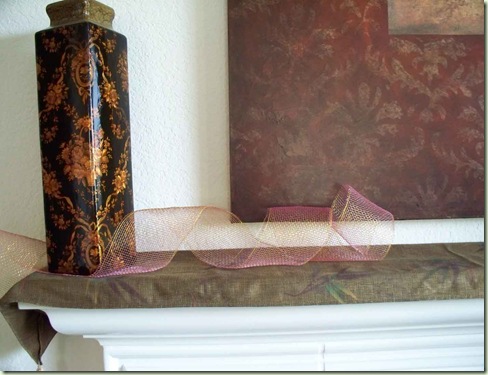 Mom loves this vase so I kept it to use as an anchor for the woven ribbon. 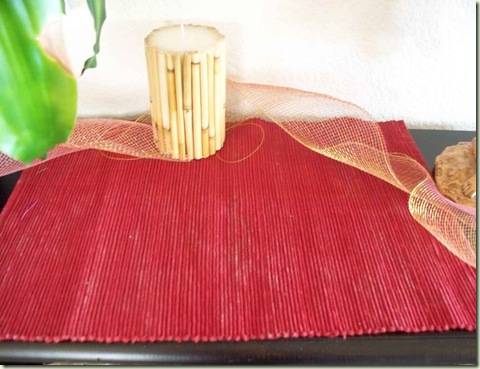 A red placemat works for the entry. Same ribbon as the table and the mantel.

Then I just layered the ribbon. 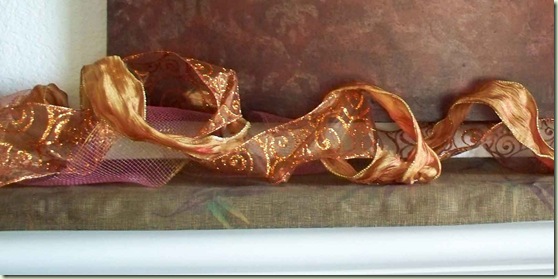 It looks like mish-mash right now. And maybe too much glitz, I’m thinking. But I just kept going. 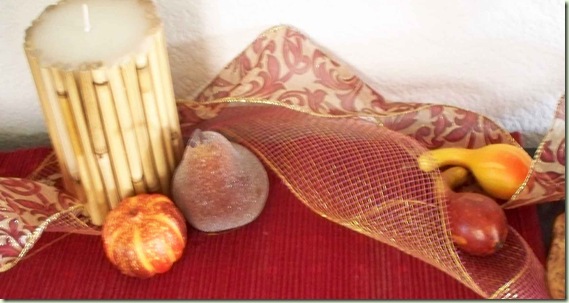 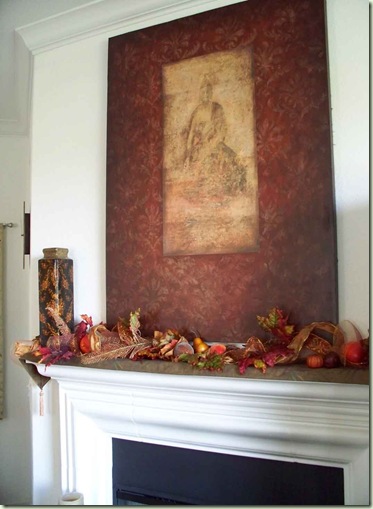 Just ‘smoosh & push’ and the mantel was covered.

Mantels can be tricky. They’re usually the focal point in the room but often too wide and not deep enough to place items that are tall enough to balance the scale.

Since we have this huge painting over the fireplace, I knew I couldn’t come up with anything tall enough. I could’ve put some curly willow in the vase – but not any color in that.

So I just went with the smoosh and push.

Nothing arranged or contrived – just little pops of color and texture. 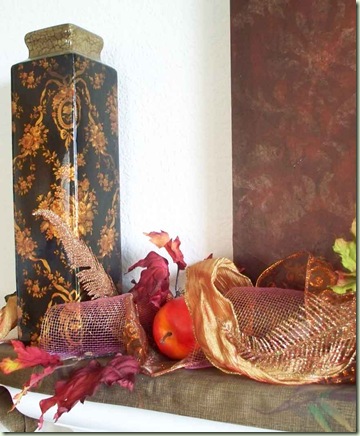 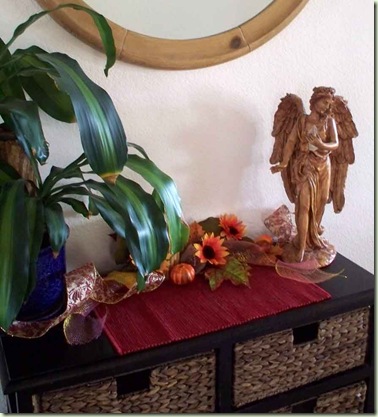 I found three little sunflowers so I added them to the little chest. 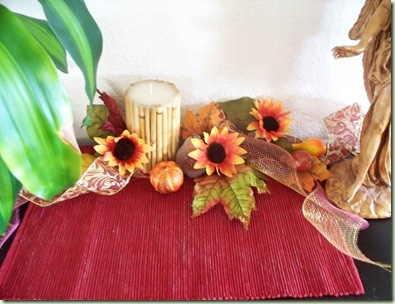 Since this chest is a ‘landing place’ in the entry, I wanted to leave a large portion clear for keys, papers, etc.

Yesterday I told you I used beaded berries, which are fairly fragile. I always put the most fragile items in last so I don’t pull them apart as I’m shoving stuff together. 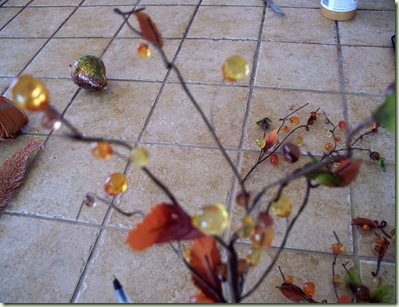 Well, you can’t really see the stem too well here. What I was trying to show you is how wired items go all catty-wompers in storage.

The stems get caught on each other and when you pull them apart, they straighten out and wind up in weird angles. 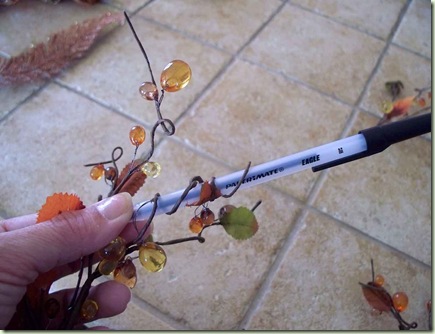 Just grab a pen or pencil and wrap the wired stem around it. 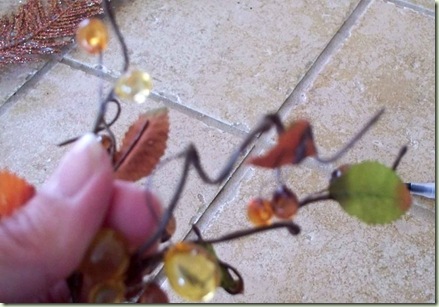 Pull the pen out and the stem is curled into a spiral.

I use a lot of artificial florals. It comes from being a floral designer in a craft store.

Most fake florals are wired, which makes them stick straight.

Nothing in Nature is straight. Nothing.

Everything has a natural curve or bend to it. 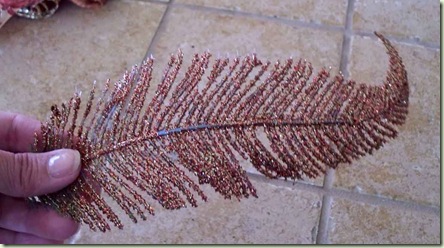 No matter what I’m using, I give it a little bend. 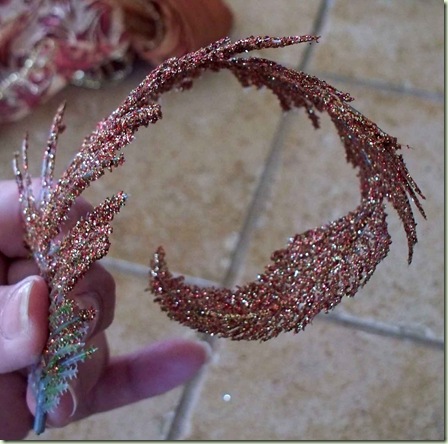 Ok, I know feathers don’t actually bend like this. But then they don’t come glittered either, do they? 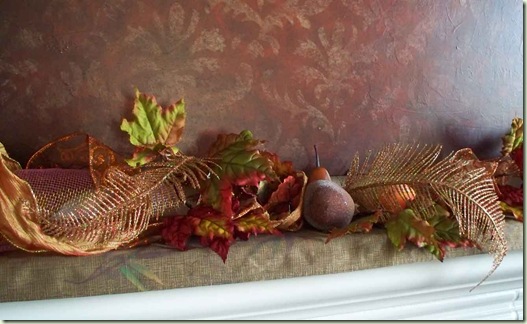 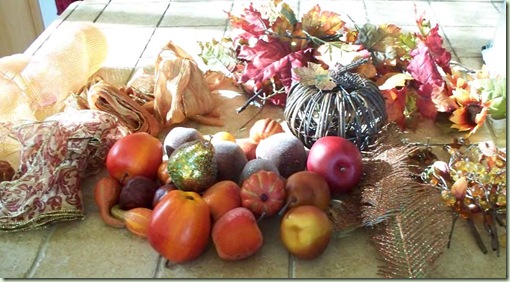 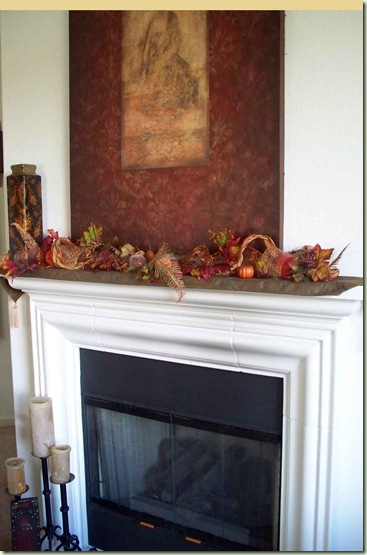 A little fall without any effort!

Disclaimer: This style of decorating will not work in a house with children. Or possibly men. Or women who have a Martha complex.