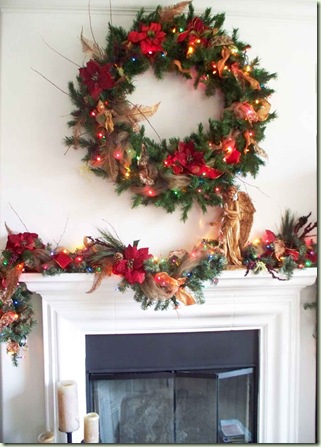 I had plans to decorate the entire house the other day. Big plans.

I managed to get the mantel done before my back said, “Enough!” 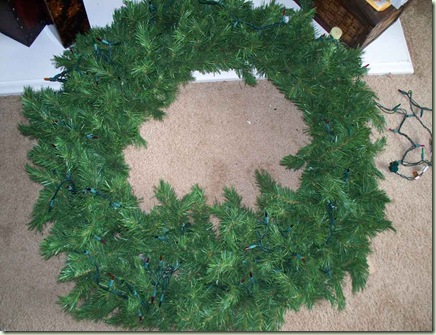 This thing is so big, I decided to just put it on the floor to start with. It was either stoop over it or climb up and down the ladder.

I stooped for about 5 minutes.

For those of you who think a Christmas wreath has to be perfectly designed and completely covered with decorations secured tightly with glue, think again.

I’m assuming you’re already done decorating because me – being the ‘professional’ decorator – is always the last to get my own decorations up.

And these aren’t actually my decorations – they’re Mom’s. Mine are still buried in a storage unit. 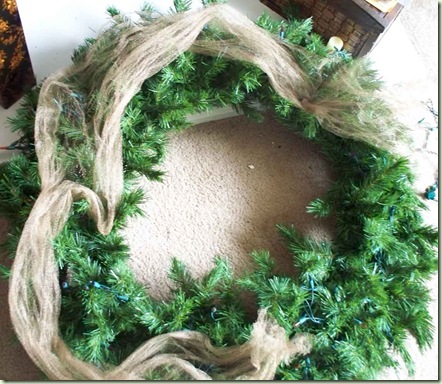 This is a piece of bronze tulle netting. It’s pretty wide so I can ‘pouf’ it out. 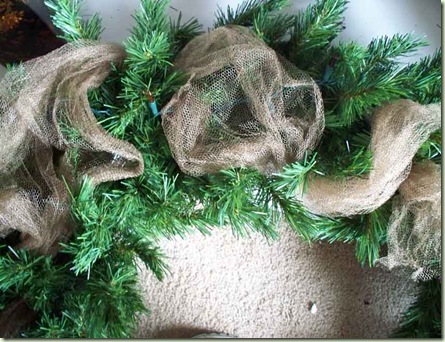 With an artificial wreath, I don’t use wire. I just twist the pine fronds (are they called fronds? needles? twigs?)

I twist the pine thingies to secure the netting. Then pull the netting here and there to pouf it out. 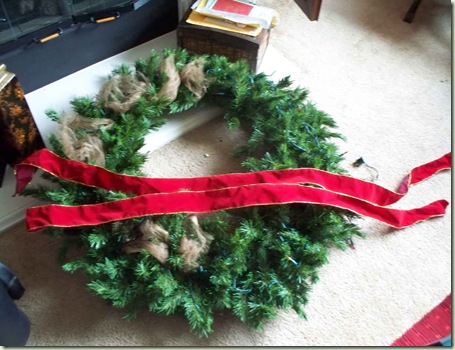 Here’s my answer: As much as I’ve got.

I found these 2 pieces of red ribbon, which would’ve been enough for the wreath. But I had the big ol’ garland underneath it. 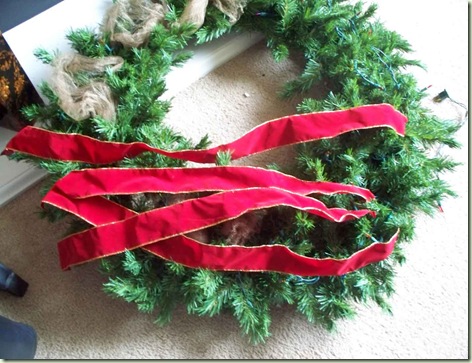 Snip, snip! Now I have four. Yes, they’re shorter, but it’s just enough red to pull in some of the other red decorations.

Did I forget to tell you that? The ‘theme’ is red and bronze.

Bronze because it blends with Mom’s furnishings – couch, drapes, carpet.

(And because I used bronze for fall and it was already sitting out.) 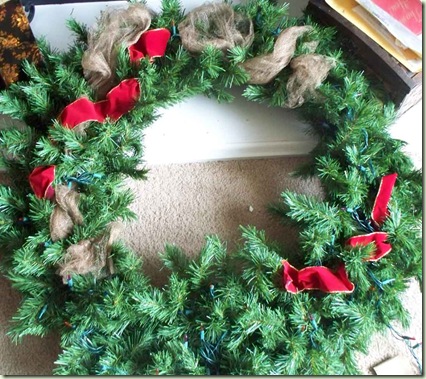 Tuck the red in on opposite sides. 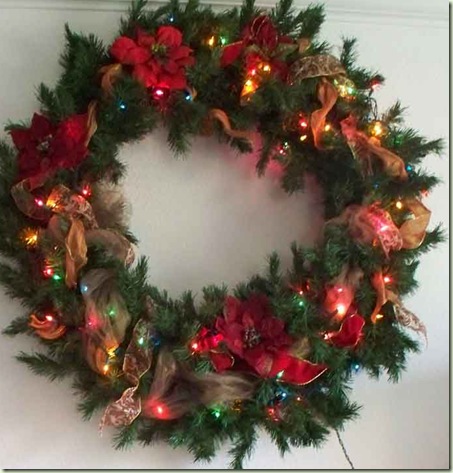 I had to hang the beast up. Then I added some more bronze ribbon. And 4 red poinsettias. They don’t even match, but in a piece this big, you can’t really tell.

Well, now you can, because I told you. But it’s really not that obvious.

Remember this from Fall? I just took the ribbon from the table and scrunched it into the wreath. Then the leaves & gourds all go into a tote. 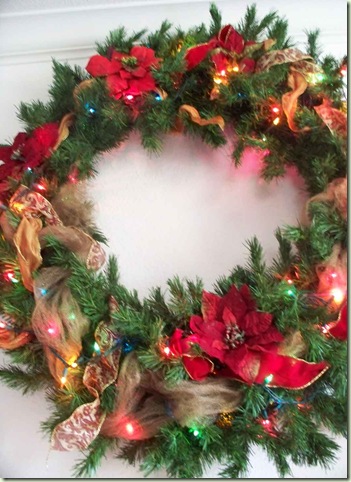 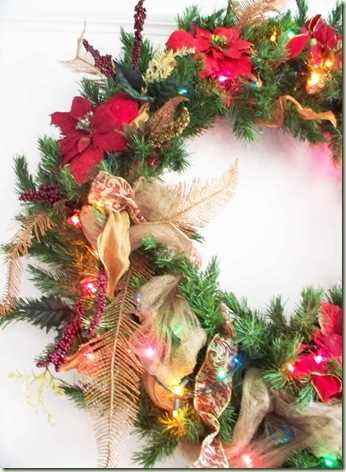 Then I started building ‘clusters’ around two of the poinsettias. A few berries, a few glittered feathers – again, from the Fall décor – and we were getting somewhere.

I do clusters rather than an overall coverage of decorations because it gives it a little more visual interest. Plus, it helps the budget.

I don’t do a huge bow because it tends to overwhelm the piece.

The next time you see a wreath with a bow, see if your eye doesn’t go straight to the bow rather than the entire wreath. 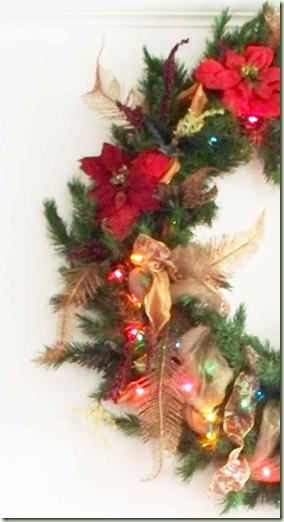 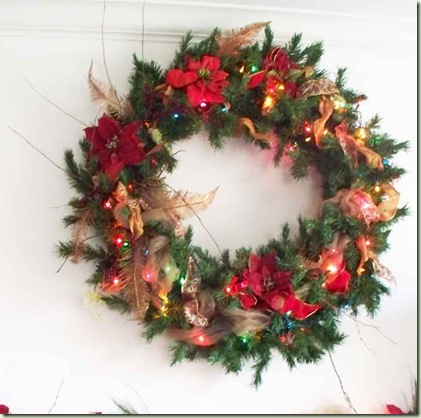 And, as if this thing wasn’t big enough already, I added some twigs.

I did this for Mom – just to add some ‘woodsy’ feel to it. Not much, but just a touch. 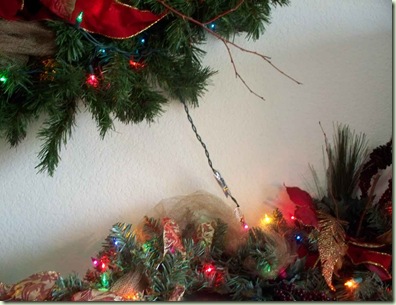 No, I don’t have battery-operated lights yet. Yes, I’ve tried solar lights . . . yuck. Although it was a couple years ago.

Let me know if you have some that you like.

Where was I? Oh yeah, the cord. 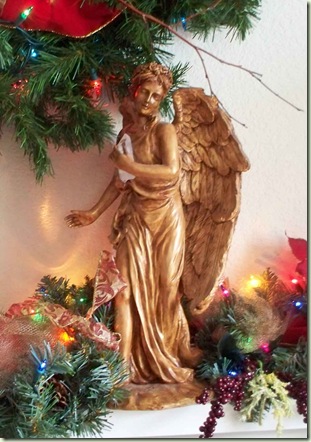 I grabbed this little gal from the hallway.

Perfect color! (I should know, I did the antiquing over the original silver a few years ago.) 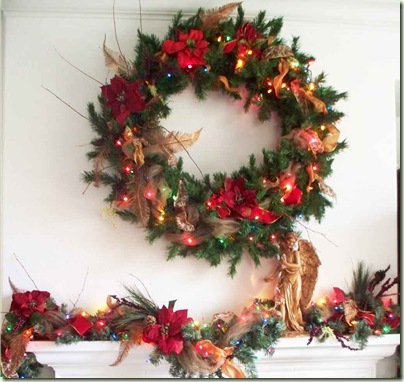 Not too bad for under 30 minutes. For a gal with a bad back.

I’m off to find my ice pack now.