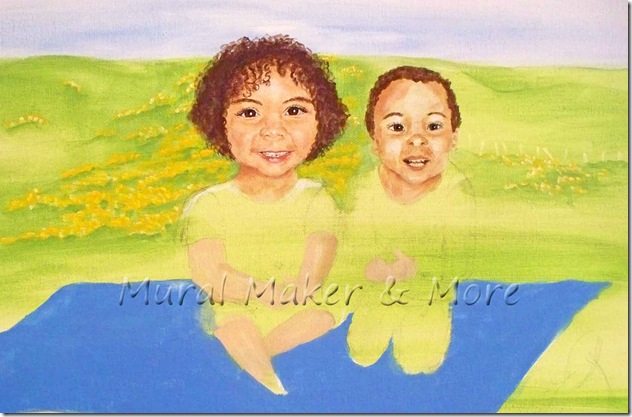 My grandson will be 4 in September. His skin is the most beautiful shade of light brown – the color I always wanted back in the days when sun tanning was acceptable.

Back in the days when caucasians were white, african americans were black and mixed babies were . . . well, mixed.

Times have changed, haven’t they?

When my grandson was two, he told me his daddy was black and that I was white. I asked him what color Poppy (Grampa) was.

At nearly-four his discernment for color has broadened. I take full responsibility since we spend a lot of time mixing colors when we paint together.

(However, I think his latina mother and african american father have added their own ‘color theories’.)

I have a feeling in another year he’ll be saying he’s ‘bronze’.

Which is just fine with me. I like knowing the heritage of people and I also like when ‘race lines’ are a little blurry.

However, that doesn’t make painting children’s faces any easier for me. Remember my struggles with the fairies?

This brother and sister are a beautiful combination of hawaiian, black and american indian. They’re mother emailed me a collection of photos I’m working from.

Brother? No problem. He came together in a matter of minutes.

But Sister? I’m on my 4th go around. Since this isn’t an actual ‘portrait’ and more of a painting of two kids in a field, I’ve had to let it go and move on.

Not one of my strong suits.

But I thought I’d share the progression of this fourth, and final, attempt at painting her darling face. You know, if she wasn’t so dang cute I don’t think it’d be such a challenge. But, dammit,  I wanted to really capture her. 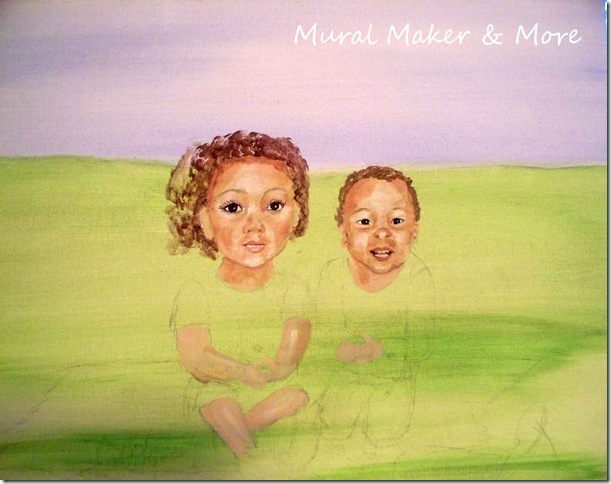 This is where I had left it before the cherry blossoms and fairy mural.

Then I had a brilliant idea. Or so I thought at the time. 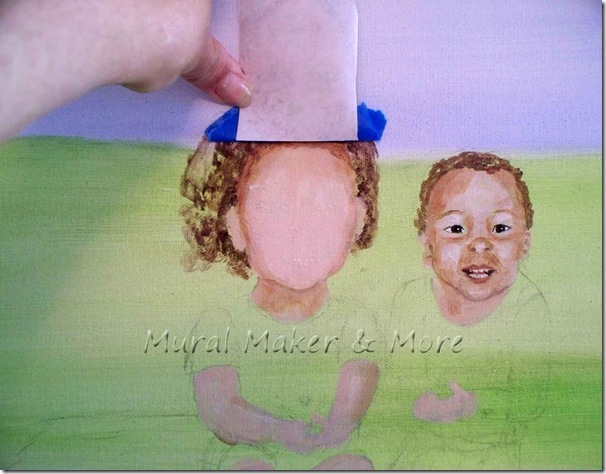 After ‘whiting-out’ my 3rd attempt, I reduced the photo Mommy sent me.

Aaack – look away, look away! I just realized how scary this looks. Although . . . I might have a career painting faceless children. Ya think? 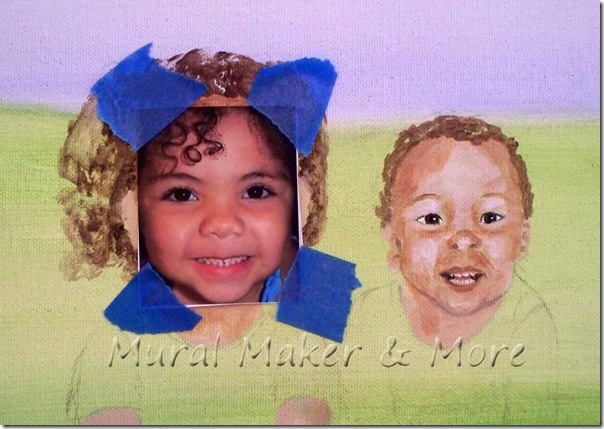 Look at that darling face!

I seriously considered whipping out some Mod Podge and calling it a day at this point. 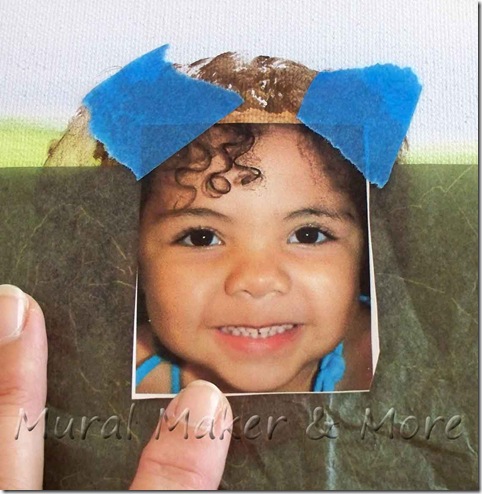 I slipped some graphite paper under her photo and transferred her features.

I don’t know much about painting children’s faces, but I do know the relationship of the eyes-to-nose-to-mouth, as well as the size of the head, makes a huge difference in the age of the child. So I figured if I just transferred her features, the rest would be easy-peasy.

That’s what I figured. 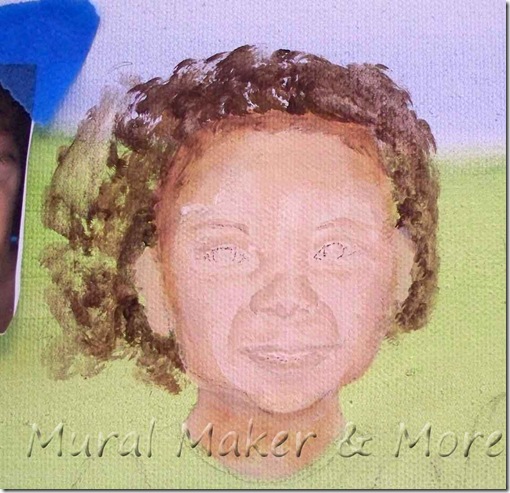 Because this was Attempt #4 (and I’m a big chicken) I lightly – very lightly! – painted in her features. 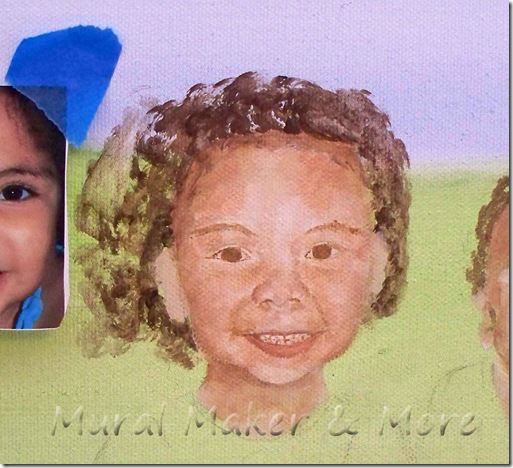 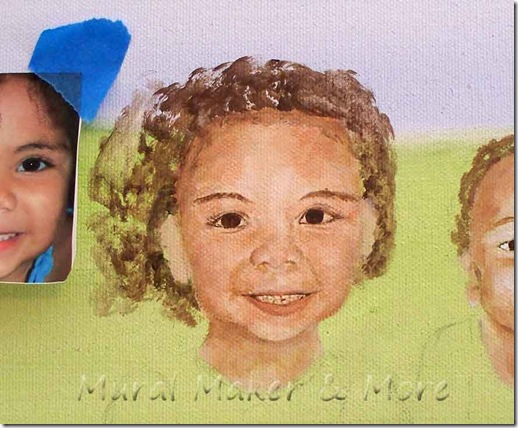 This version may make it all the way! 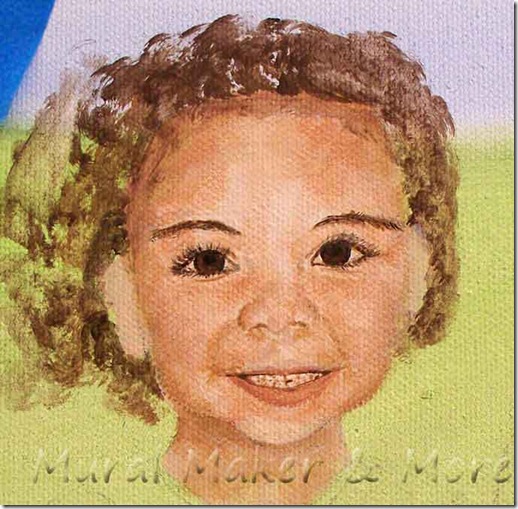 What’s the difference between this pic and the one right above it? Just the addition pupils and eyelashes. 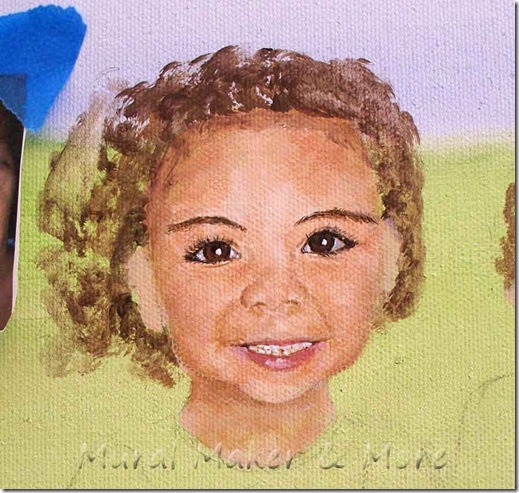 Then a little highlighting.

I think we have a keeper. The painting doesn’t look exactly like Sister, but it’s a close-enough resemblance that I think it’ll pass.

Otherwise, Sister will be in college by the time I’m content. 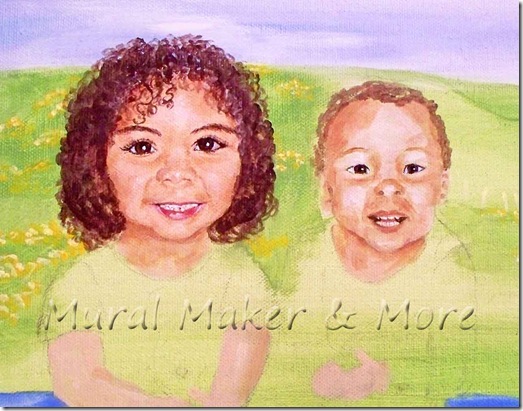 Then I totally mucked her hair up. 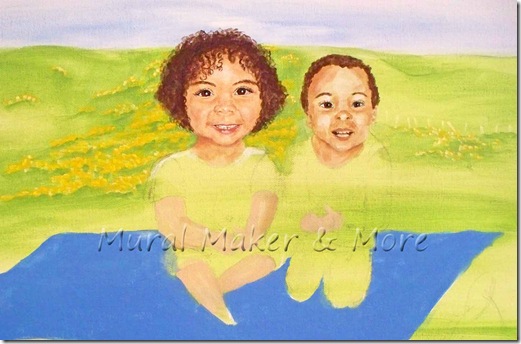 Haircuts are much easier than painting faces.

Brooke – the hard part is over, if you’re okay with K’s expression. Let me know if this works for you! Again, sorry I’m taking for-evah with this and thanks for your patience!