This is Part 1 of a two day, maybe three, paint project. The snow scene is the background for the project. I did a tutorial last year for painting a snow scene. No, that’s wrong . . . I’ve done two. One with trees and snowflakes, and one as a background for a snowman. 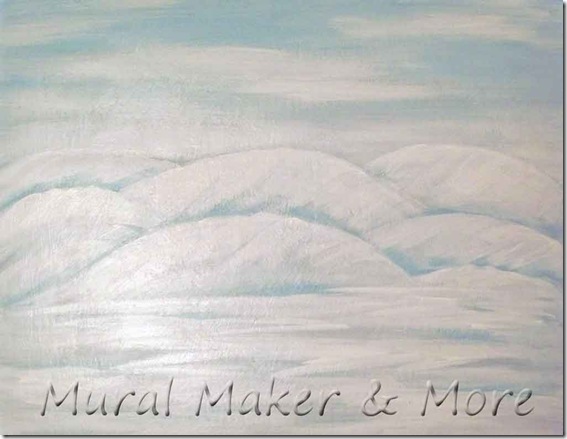 So why paint another snow scene? Especially since I’m basically painting this one exactly how I painted the other two? Well, mainly because this snow scene has something hidden underneath the paint. 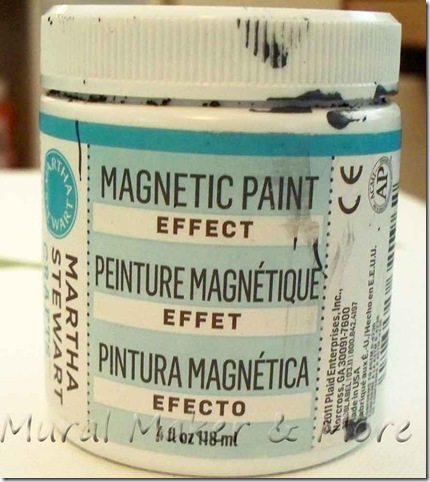 Magnetic Paint! Now, why would I put magnetic paint under a snow scene, huh? A couple of reasons, actually.

First, and most importantly, because I was selected to partner with Plaid Crafts to create a holiday project using Martha Stewart decorative paint and paint effects.

And, second, because I want to stick something on the snow scene. With magnets, of course. But we’ll get to that tomorrow. Today is all about the background snow scene. 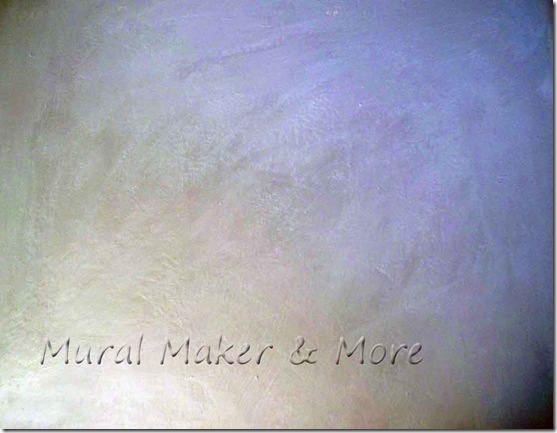 Martha Stewart’s Magnetic Paint is pretty incredible. You can paint it on nearly any surface and make it magnetic. I chose a piece of cardboard. A large piece – 18” x 24”. I used cardboard because I wanted it to be relatively lightweight.

I stirred the Magnetic Paint really well with a palette knife before I applied the first coat. Then I covered the cardboard with a generous amount, set it aside to dry for an hour and recoated it. I wound up using 3 coats because, not having used magnetic paint before, I wanted to be really sure it would hold magnets. 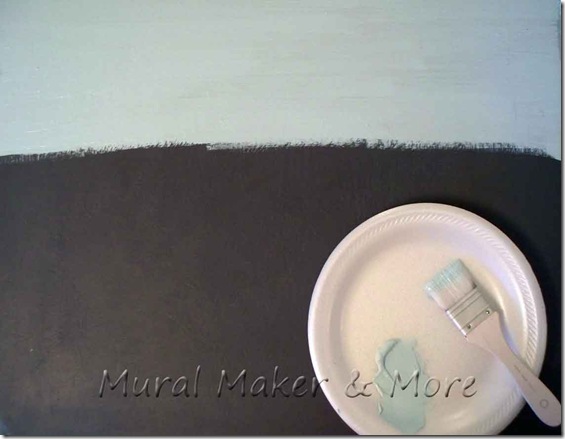 It’ll help to think of this background in 3 parts – the sky, the hills, and the foreground. Even though we’ll use the same paint colors on all the parts, just sort of visually divide the painting into thirds.

The first paint color is a pale turquoise-blue called Sea Lavender. For the upper third, or the ‘sky’, brush the paint on in horizontal strokes. 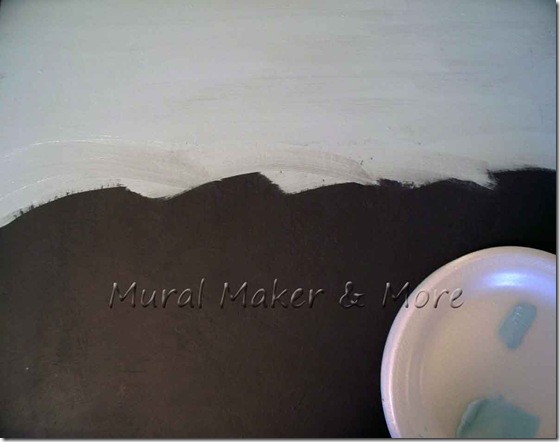 If some of the magnetic paint shows thru, that’s fine. We’ll add a few more coats on top of this one. 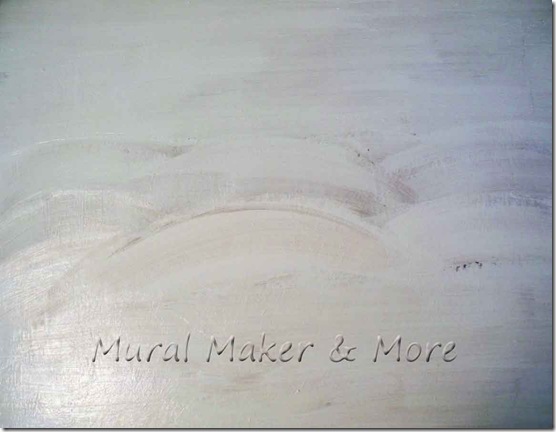 I added a few rows of hills. You can make as many as you’d like. Then I filled in the bottom third – the foreground – with horizontal strokes just like the sky. 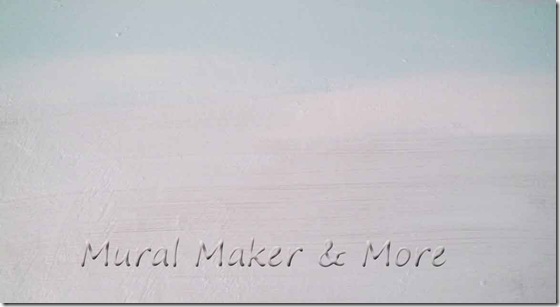 For the 2nd coat I used Surf by Martha Stewart. It’s a deeper turquoise and will seem a little too dark at first. But I wanted the contrast. I applied it to the highest part of the ‘sky’.

Now, you could certainly use light blues for this. I used blues last year and liked the look. But I’ve been on a turquoise kick for a while and it works really well as a contrast to ‘snow’. 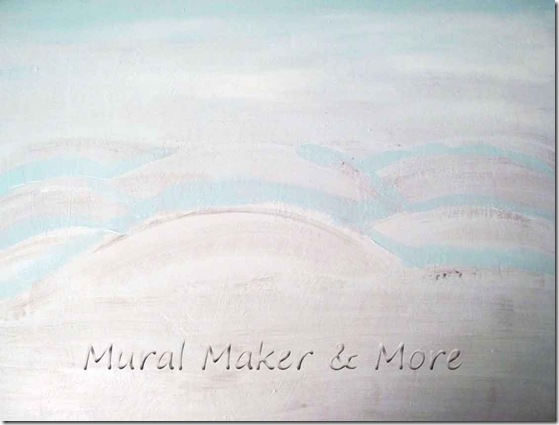 Next I applied Surf to define the hills by painting strokes above the hills and where they intersect. 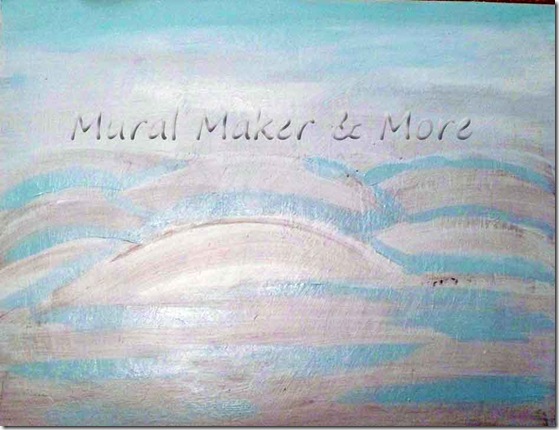 I changed the exposure on this pic so you could see the shading a little better. Do you see what I mean about the hills?

Ok. For the foreground, I just haphazardly applied some horizontal strokes.

Here’s the thing – when you’re painting snow you have to add some contrast somehow. I could add shading afterwards and create contrast that way. But, remember, this is a background for magnets to stick on. Plus, this is a pretty foolproof way to paint a snow scene. 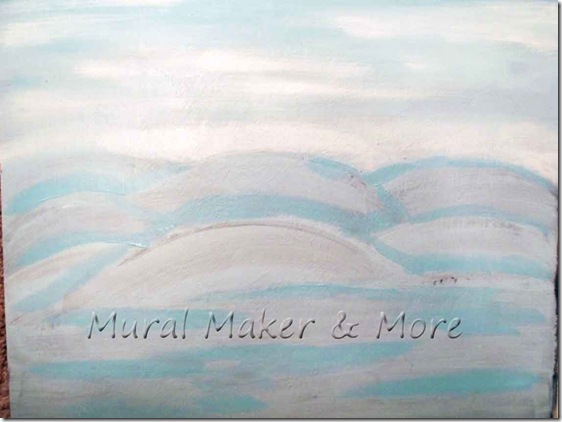 Now it’s time to add some white, or Wedding Cake by Martha. Again, horizontal strokes on the top third, or the sky. Don’t paint full coverage – just light strokes across the picture.

We’ll add another coat after this dries. And, once it dries, you’ll see how this coat is absorbed into the light turquoise, so it’ll need some more Wedding Cake to look like wispy clouds in a sky. 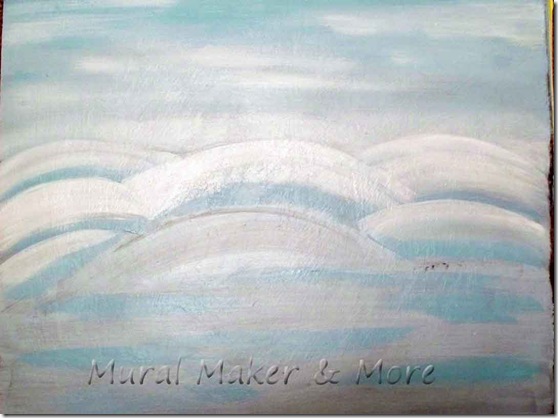 Then add some white, or Wedding Cake, to each the tops of each hill, allowing the shading (Surf) to stay on its own. ‘Course, if you cover it up, it’ll peek thru and be okay. There just won’t be as much contrast. 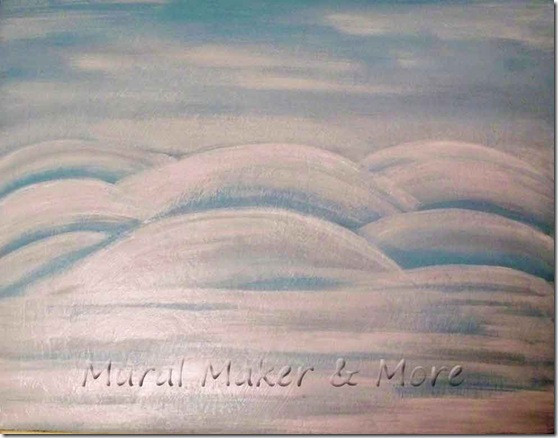 Then add Wedding Cake to the foreground in horizontal strokes, applying more than you did in the sky.

Sorry about the glare. It’s the dang time change. I lose daylight so much quicker now. (That, and I don’t start painting early enough in the day

Okay, once that coat of Wedding Cake dries, you can add some more highlights to the sky. A little or a lot, you decide. 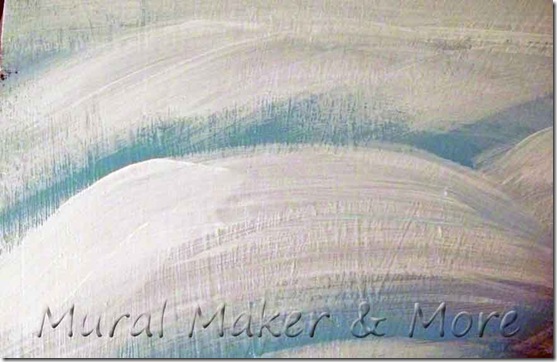 For the 2nd coat of white on the hills I brushed the paint on slightly different. It’s not hard and it’ll give a little ‘movement’ to the painting. So, just angle the stroke a little more downward. 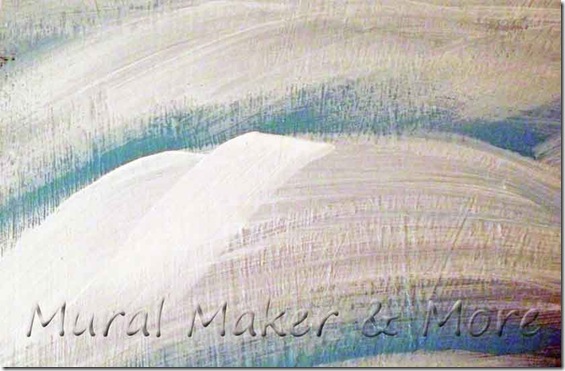 Then paint another stroke right next to it . . . 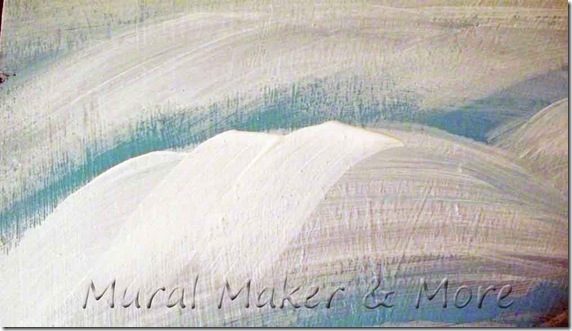 And keep going until you’ve painted each hill with angled strokes. 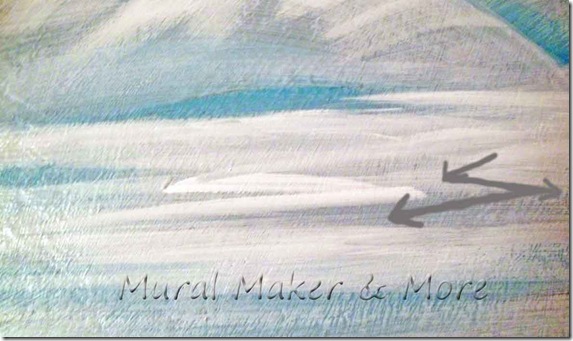 To add some ‘movement’ to the foreground, paint some ‘Z’s here and there. It’s not a precise Z. It’s just a way of creating interest without actually painting something definite.

If it doesn’t, don’t worry – it’s me, not you. It’s late and I’m tired and I still have a ton to do for the rest of the project. I’m not complaining. I love doing this stuff – creating, painting, writing! I love it! But my mind gets a little rummy this time of night, so I’ll just sign off now. 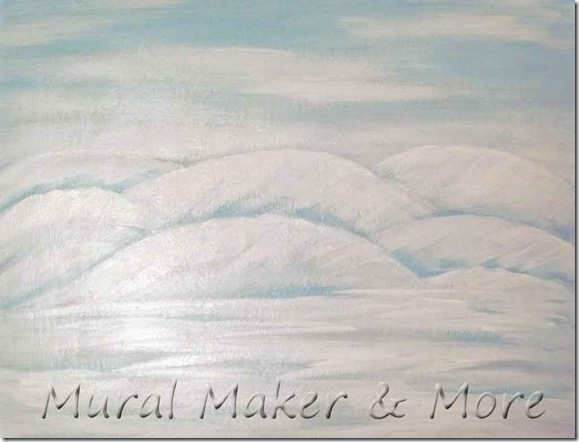 But, please come back tomorrow and see what we’re putting on the snow scene, though!