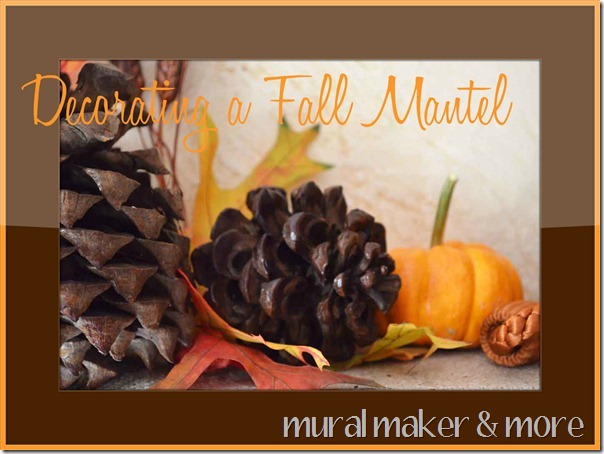 Decorating a mantel is one of those things that can drive you a little nuts. When, really, it should be fun. But with so many fabulous mantels floating around on Pinterest, it’s pretty easy to second guess yourself.

Or is it just me?

I’ll freely admit, I’m not a minimalist at all in decorating. In fact, I have to remind myself to edit, edit, edit. It’s basically a lot of gathering, a lot of putting stuff up, moving it here and there, and standing back. Then do it all over again. And again, and again.

But I’m willing to show you my thought “process” and what I finally wound up with. Wanna see? 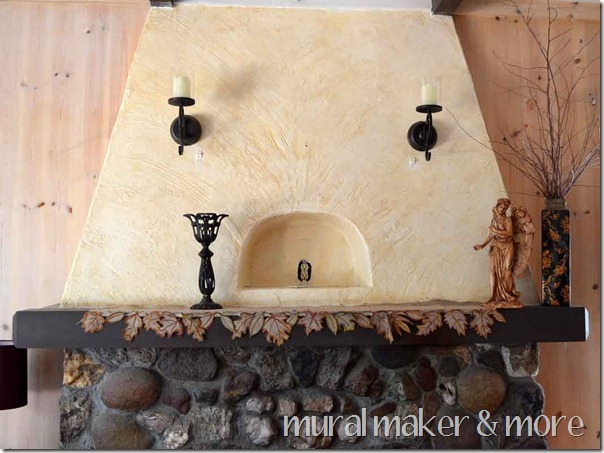 Here’s our basic mantel. I replaced my painting with two battery operated sconces (with timers!), my fall leaf burlap mantel scarf, a wrought iron candle stand and my mother’s angel I faux finished for her years ago.

The black & copper vase with branches is a mainstay all year long.

So is that weird little niche that makes any arrangement on this mantel more challenging than normal. 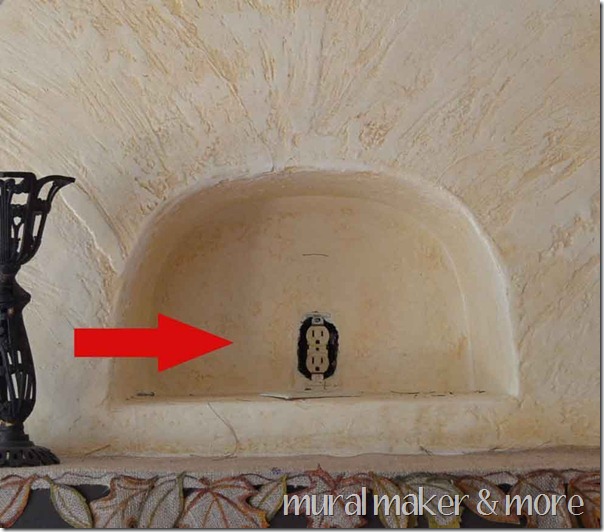 It also has an electrical outlet. That’s a good news/bad news thing. 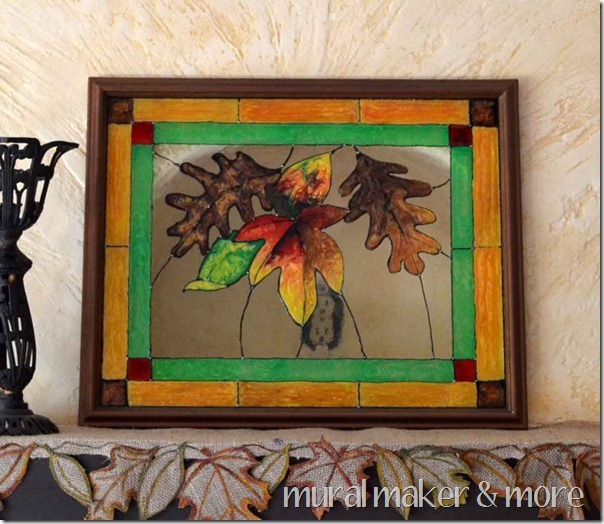 The good news? I can use my faux stained glass window as a focal point and backlight it.

The bad news is you can see it through the glass. 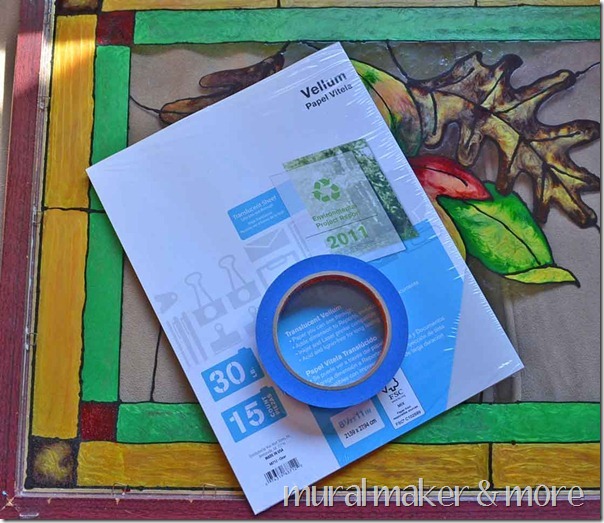 Rather than adding some frosted paint to the window I thought I’d just try taping some vellum sheets to the back. 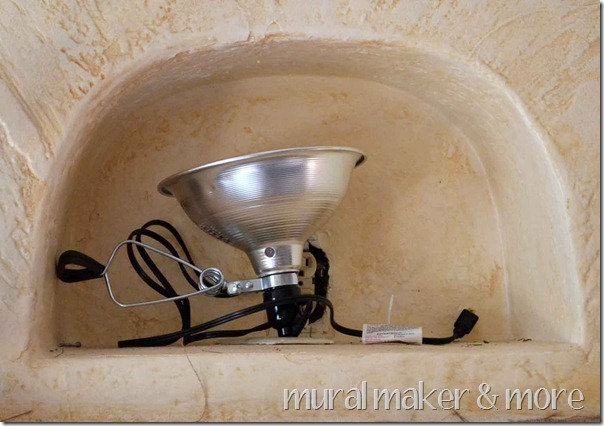 I donated one of my shop lights for the cause. 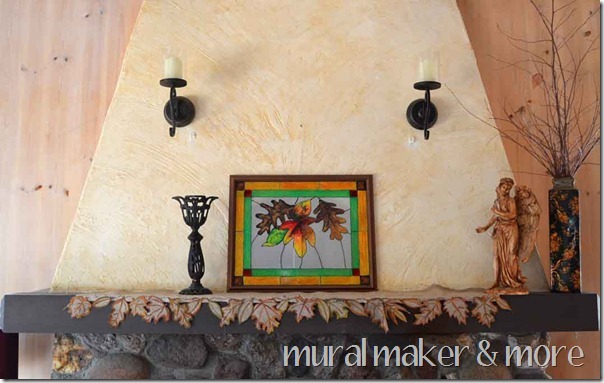 Once again, here are my basics. But there’s already a problem. Do you see it? 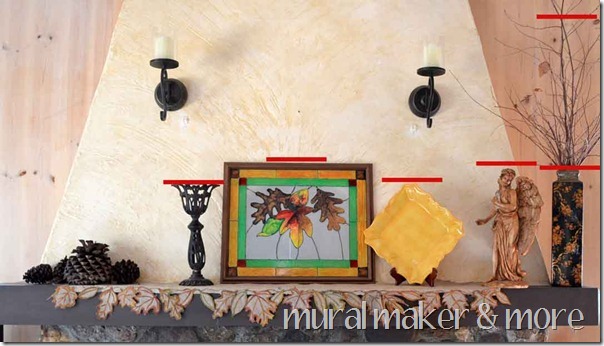 Even when I added a thrift store plate, the problem is still there. #1 on my decorating ‘guidelines’ was Scale. Everything is nearly the same height right now, which gives the eye very little contrast. 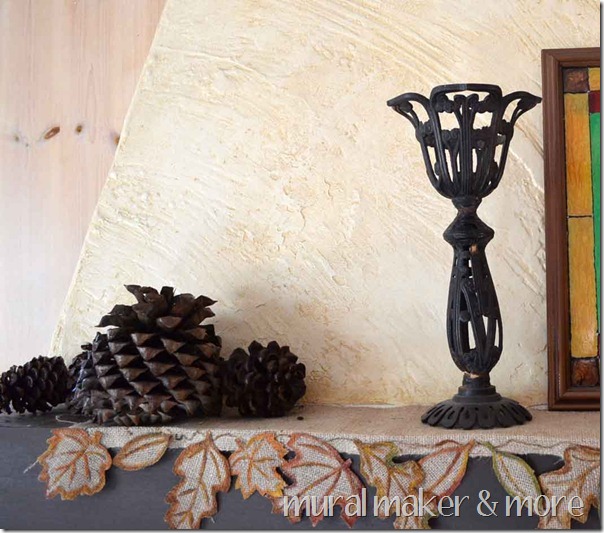 So I added a pinecone grouping for a couple of reasons – 1) to help lower the ‘eyeline’ and 2) to add an organic texture.

I love pinecones and they’re plentiful in our pastures but some varieties tend to turn grayish. 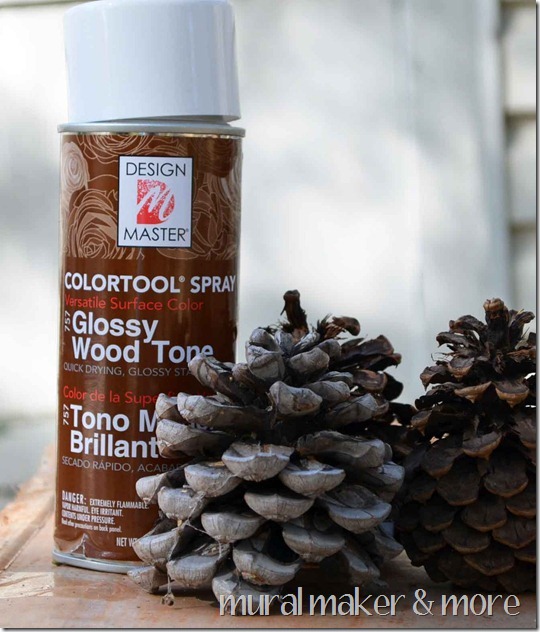 Glossy Wood Tone by DesignMaster. I first used Glossy Wood Tone way back when I was a florist and then again when I was a display designer for a craft store. I could (and probably will) devote an entire post to GWT, it’s so versatile and fabulous. Today I just sprayed a few old pinecones with it. 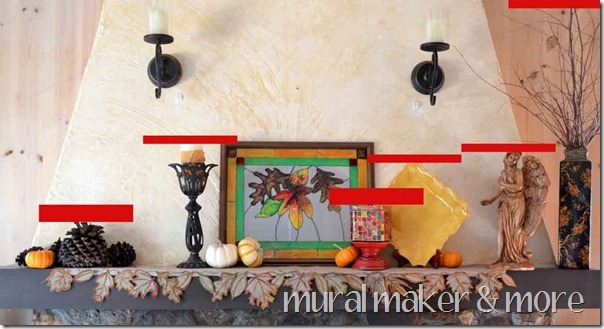 Now with the pinecones there’s a variance in scale but I had to add another lower level element. 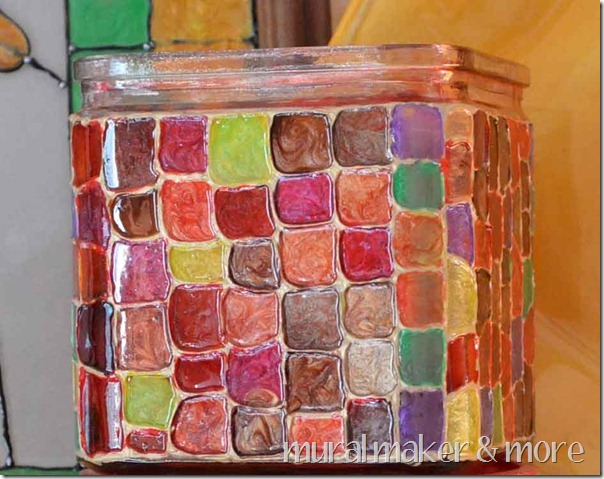 I’m still not sure about this, this thing. For now, it’s up there. Whether or not it stays, well, I’ll see how I feel about it tomorrow.

(Yes, it’s something I painted. And I actually like the way it turned out. It’s just one of those projects that took forevah and I was over it long before I was done painting it so it felt like it just dragged on and on and on.) 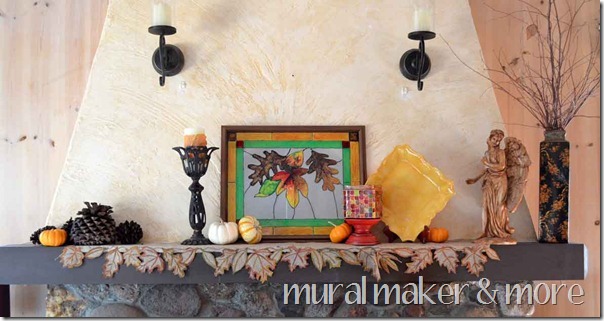 With the ‘scale’ set, I moved on to texture and color. Mini pumpkins are perfect. They add a new texture and also spread the color along the entire mantel. 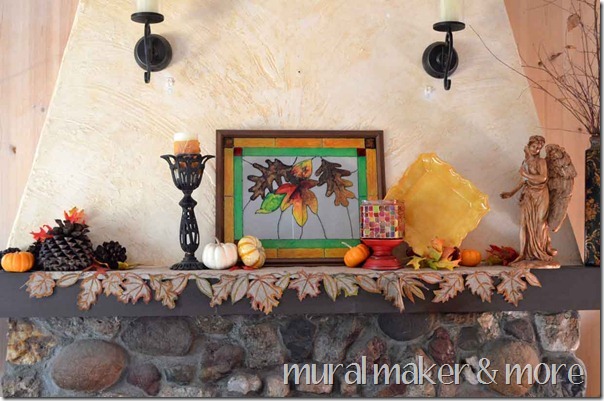 I used some dyed oak leaves for the same reason – texture and color. 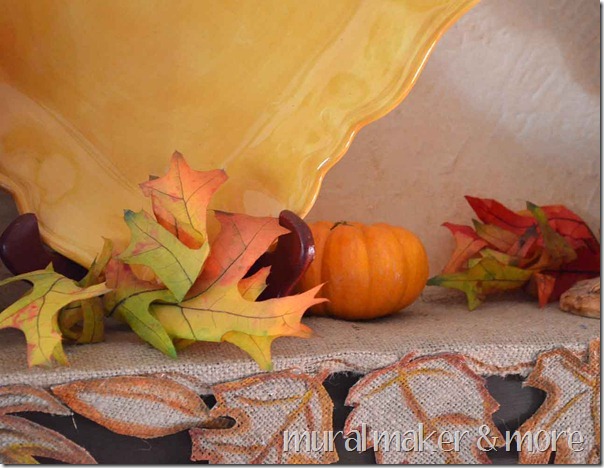 I bought a pack of oak leaves at the grocery store. They’re treated with glycerin so they’re pliable, unlike the brown leaves in my yard, but rather than try to force them into a position, I just clustered them here and there. 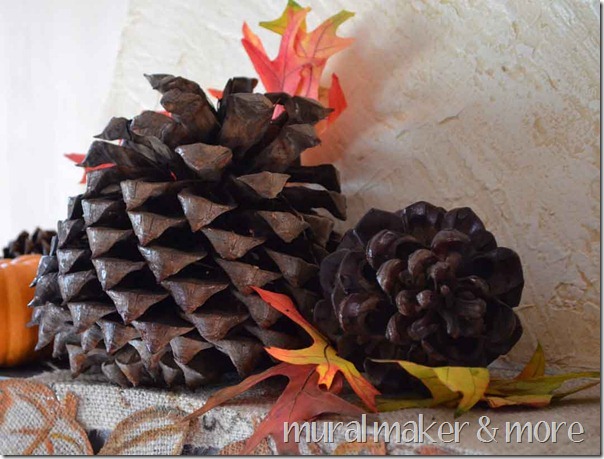 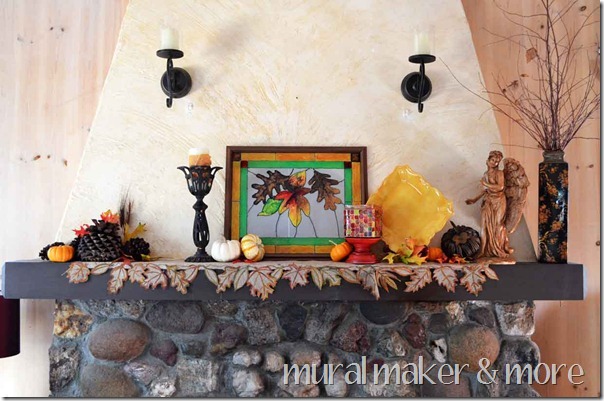 For me, this is pretty un-fussy. No ribbon. Every square inch isn’t covered with something. The heights are varied so the eye moves up and down. There are organic textures combined with shiny and rough, which add some interest. And the colors are all pretty autumnal.

Except for that thing. If I can find something else that size that works, I’ll switch it out, I think.

Oh, and remember the light? 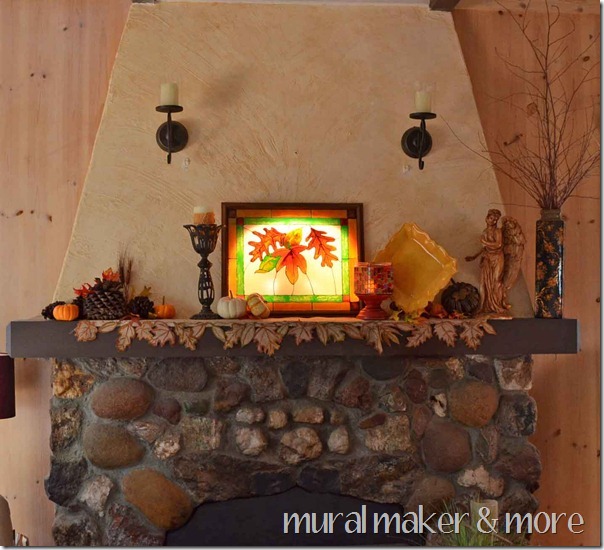 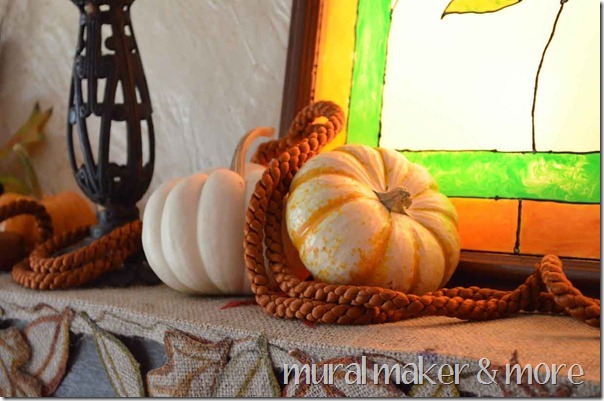 Alright, I said I didn’t add ‘ribbon’. Cording, however, is a totally different thing. 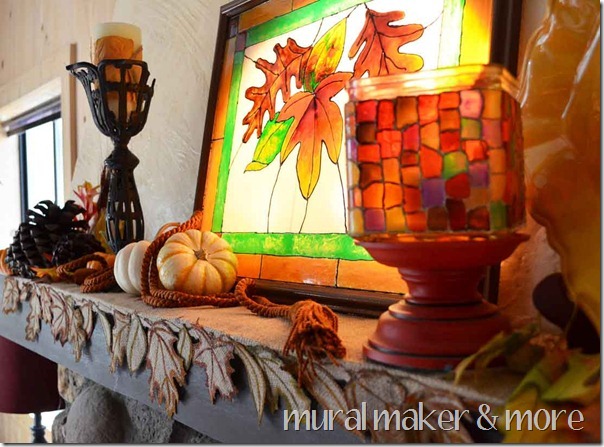 It adds nice touches of russet, a totally different texture and something else – movement.

With a mantel as long as this, it’s nice to have an element that flows and pulls things together. 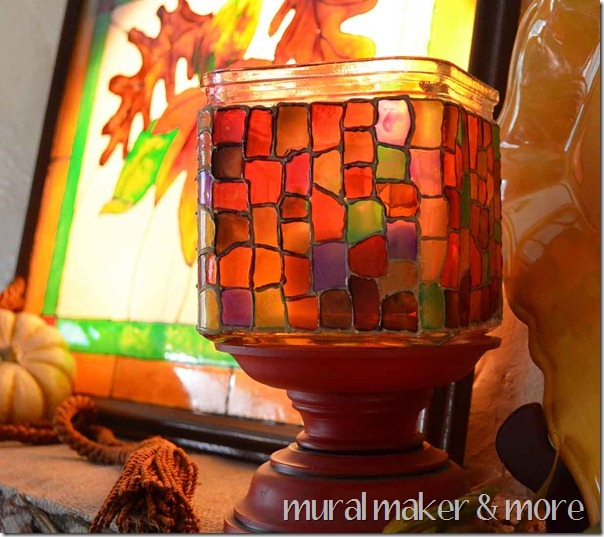 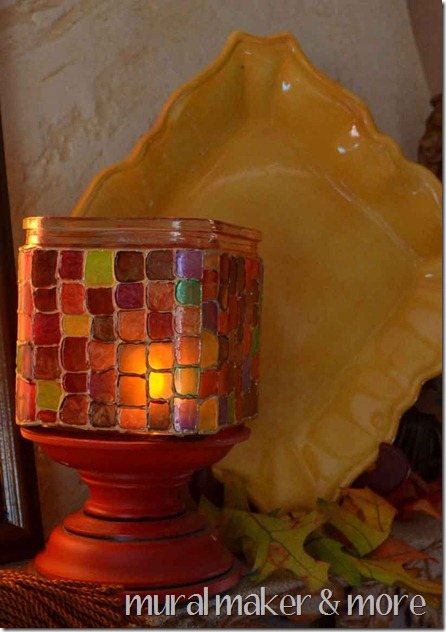 The glass paint looks so much better with light shining through, doesn’t it? 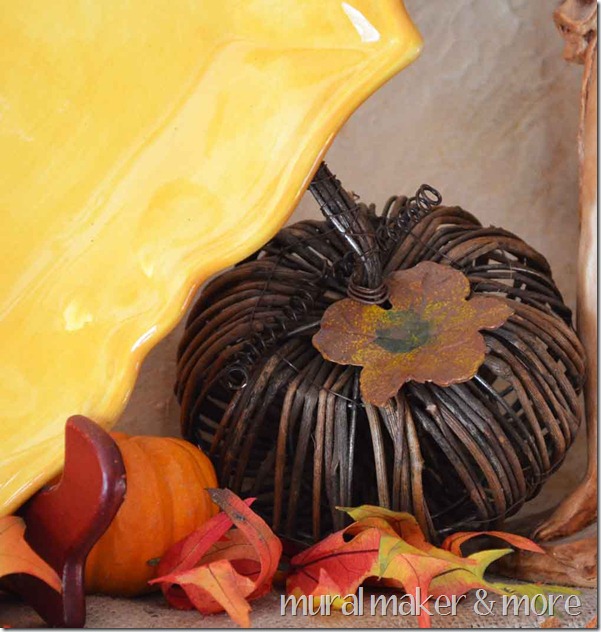 What’s fun about groupings like this is how you see things in a different light. That rusty leaf on the grapevine pumpkin? I never noticed it had those golden splotches. Just a happy coincidence. 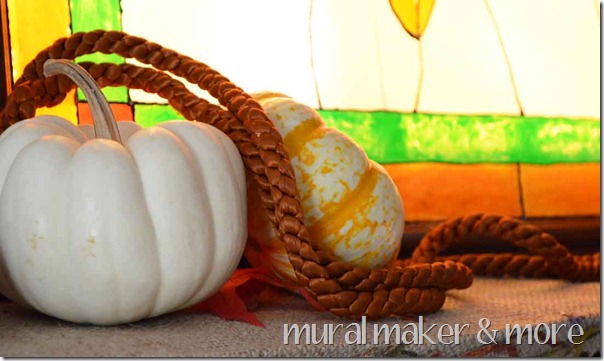 I like all the contrast of colors and textures, 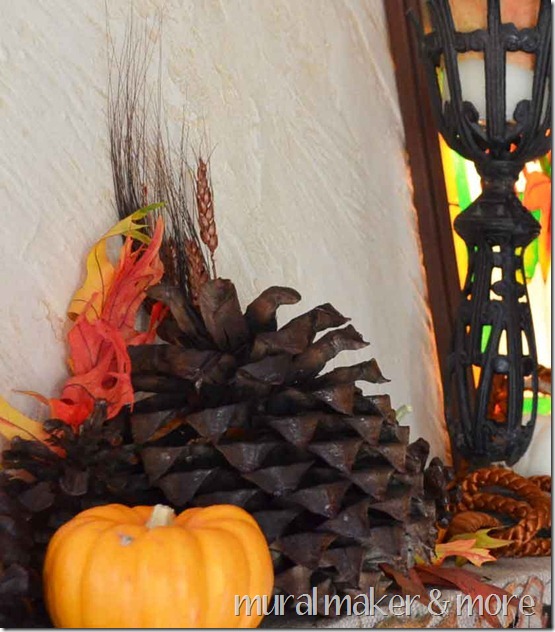 the natural textures of pumpkins and pinecones . . . 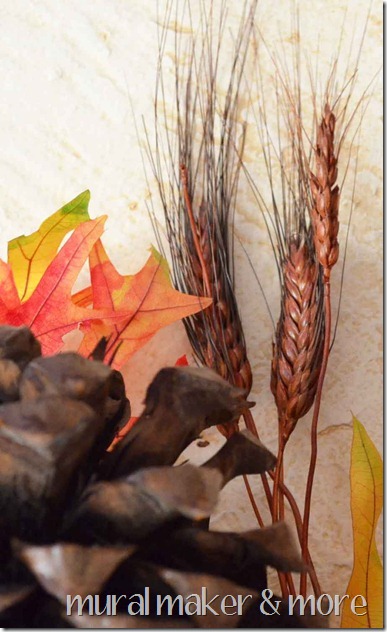 And just a touch of wheat. 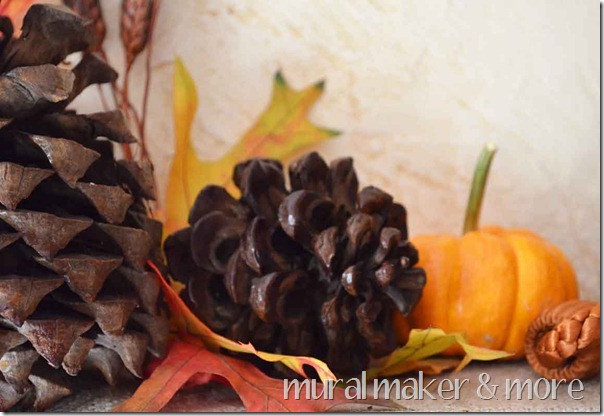 Everything on the mantel whispers “Fall” to me. It’s such a treat to walk into the room and be greeted by it now. Which is why we decorate in the first place, right?

How do you decorate your mantel for Fall? Or do you wait until after Halloween? I’m linking up to It’s Fall Y’All over at Centsational Girl. I hope you’ll drop by to see some other mantels this week! 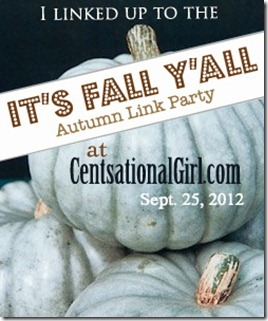