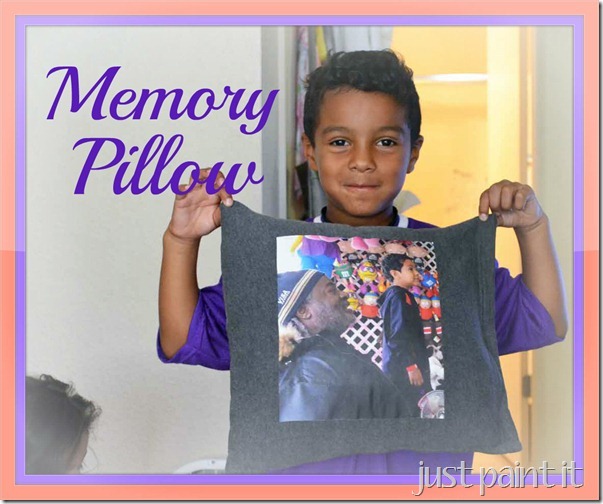 My grandson turned five on September 1. I knew this birthday was going to be hard on him after losing his precious Poppy, just as it was hard on me.

Every day is hard when you lose your best friend but holidays and celebrations are particularly painful. 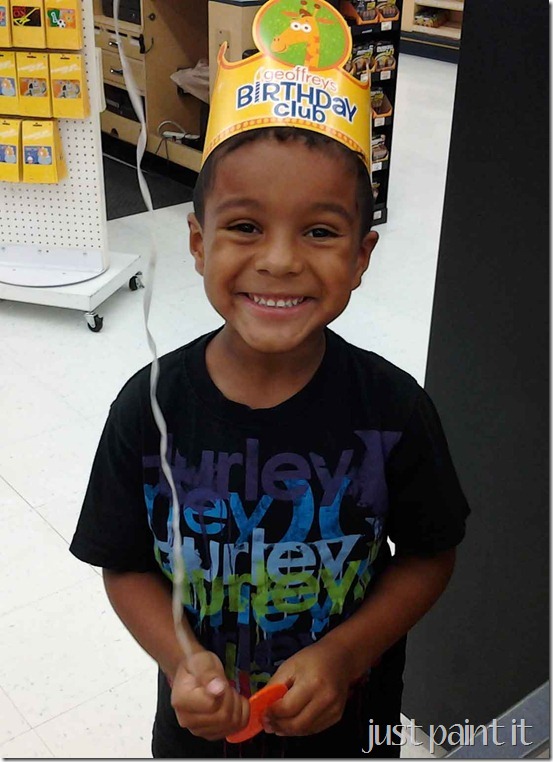 We had some fun on his birthday. I took him to Toys R Us and let him go crazy. Or, as crazy as my budget would allow. As we took everything to the cashier I mentioned his birthday & she gave him a balloon and a paper crown, which seemed to excite him more than the toys. Just sayin’.

But it wasn’t the same as his previous birthdays when he’d usually have two parties – one with his mom’s family and one with ours. And since his mom just gave birth in July to his sister (from another mister

) his birthday party had to be delayed a couple of weeks.

Which left me with a bit of a dilemma. My birthday present savings were drained on his birthday. I really didn’t want to give him another toy anyway, not with the party and loads more stuff coming.

I wanted to do something special.

Ever since Marlon died in May, Santino has been sleeping with a framed photo of him. Every night.

I know. Breaks my heart. 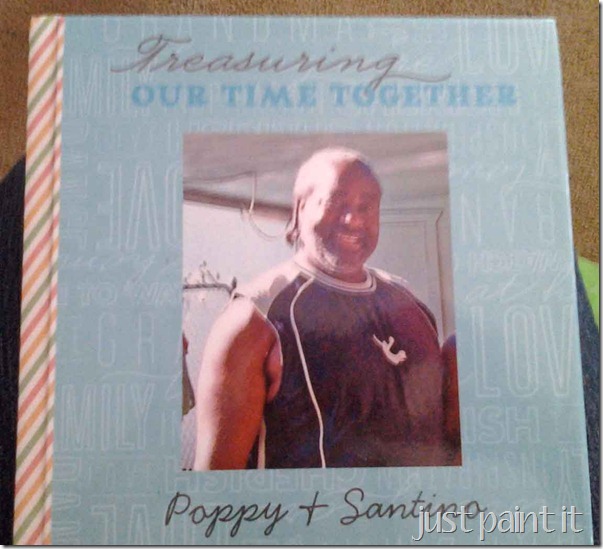 Then his mother and I made a Shutterfly photo book for him. 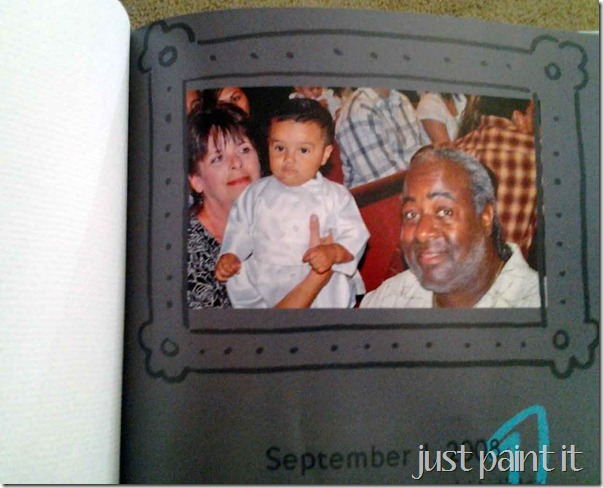 Twenty pages full of photos of Santino and Poppy.

So he’s been sleeping with his photo book every night, instead of the frame. I knew what I wanted to give him – a photo pillow. Something soft for the poor child.

I went to the store to get the pillow and some fabric. I wandered thru the bolts of yardage and nothing seemed quite . . . right.

Then it hit me. I knew exactly what I’d use to make Santino’s memory pillow – the sweatpants Marlon wore to the ER. The last pants he ever wore and the pants that Santino last saw him in.

I’ve had the pants in the hospital bag since . . . you know. I just threw the bag in the back of my closet, not wanting to get rid of the pants but not knowing what to do with them either.

They’d be perfect for the pillow. Nice and soft.

Oh, the shirt he wore to the ER? Yeah, well, that’s in my bed. I don’t sleep in it because I don’t want to wash it and loose his scent.

It’s crazy what brings us comfort. 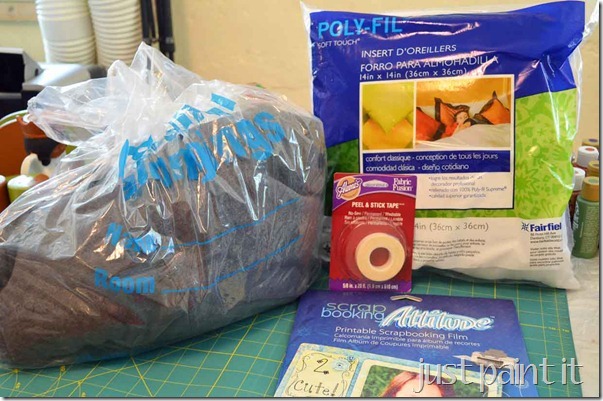 Now, lemme just say that this is not a tutorial for making the pillow. a) I don’t sew anymore and b) I wasn’t happy with how it turned out so I quit taking photos at one point. But, if you keep reading, you’ll understand why I needed to write this post. 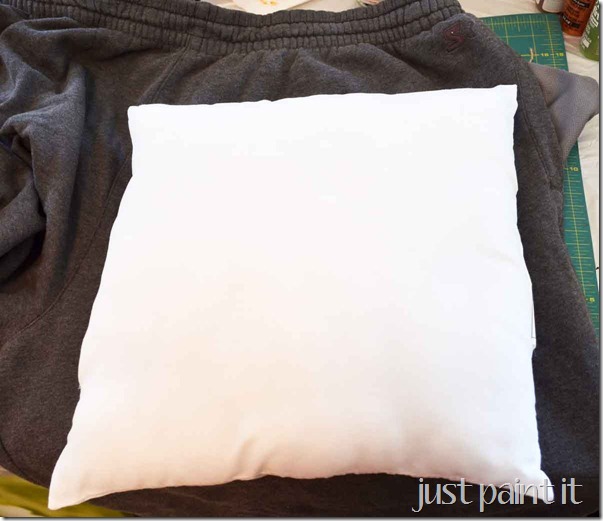 At first I thought I’d cut two squares of fabric and, you know, glue three sides, turn right side out, slip the pillow in and finish the fourth seam.

You see, I know how to sew. I’m just . . . retired. (My sewing machine is in storage. Along with my patience for measuring and ripping seams out.) 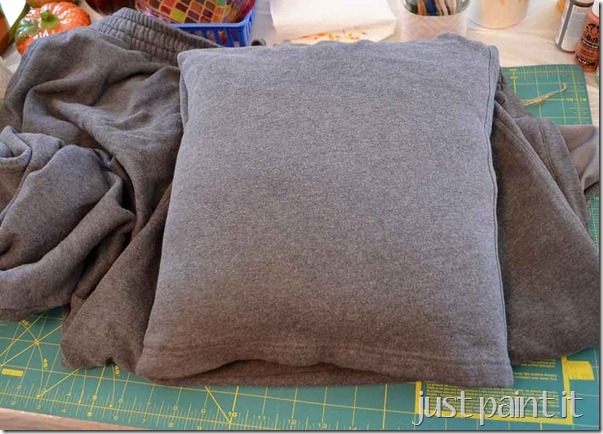 But then I tried something else. Something simple. Something . . . obvious. Something my husband would’ve seen right away because he was like that – seeing the simple and obvious ways to do things. Me, on the other hand, not so much.

I just slid the pillow into one of the legs. My husband was a big man, huge actually. 6’4” and 300+ (plus plus) lbs. The pillow fit perfectly into the pant leg, which meant only two seams to glue, no measuring, no squaring up stretchy fabric. 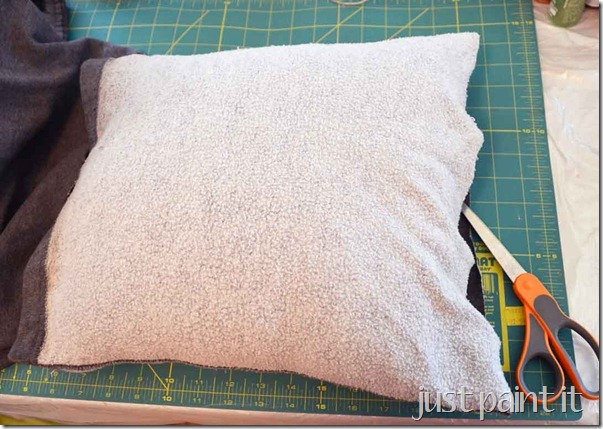 Luckily I remembered to turn the fabric inside out. I won’t lie – cutting his pants was . . . odd. It almost felt like a betrayal. And then I remembered what I was making.

And for who. Or whom. 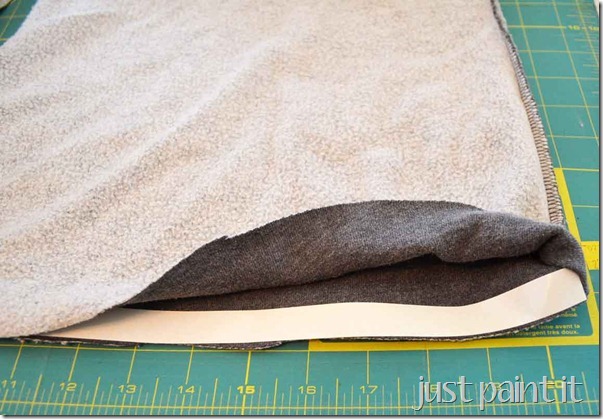 I’ll tell you more about Aleene’s Peel ‘n Stick Tape in an upcoming post. But I will say it’s awesome stuff. Peel off one side of paper and press it down. 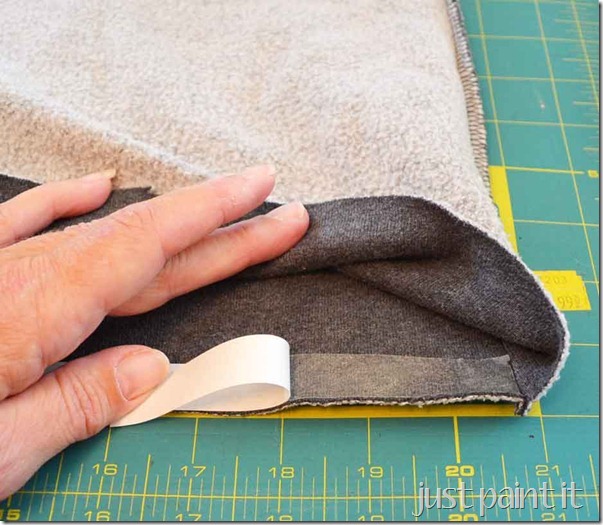 Then peel off the other paper backing. 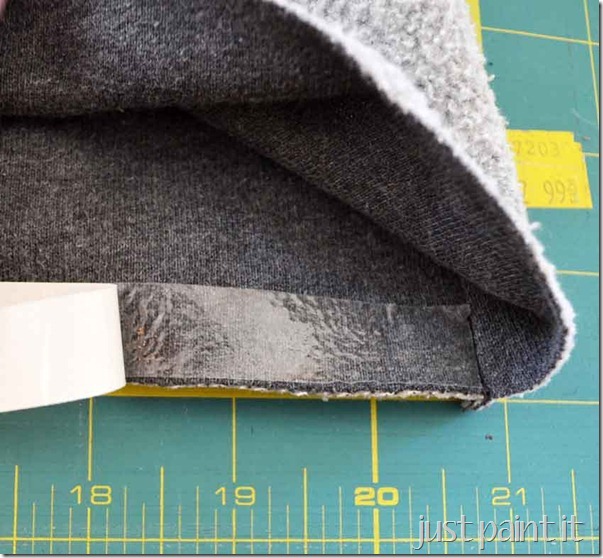 Press the two sides together. And this worked on stretchy fleece. Very cool for no-sew projects. 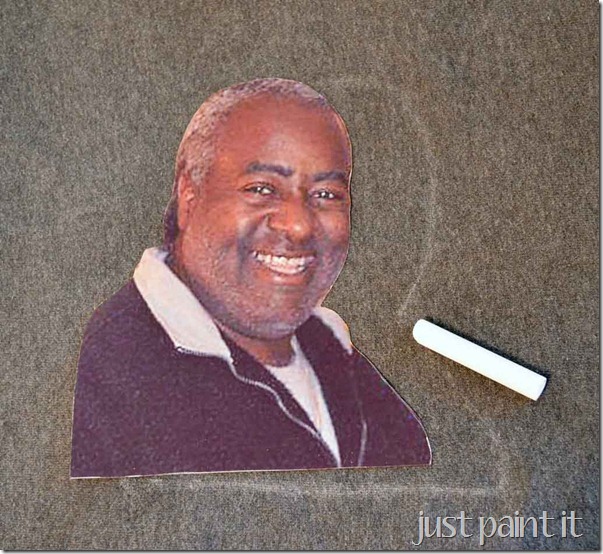 Ok, here’s where things got hinky. I printed off Marlon’s pic and glued it on but it didn’t show up well. At.all.

Pffttt. Now what? Gah. The memories came flooding back. Oh, not memories with my husband. No, those never leave me, not for a second. I’m talking about sewing mishaps – the time I snipped a hole in a completely finished dress just to trim a bit of interfacing. There were more sewing mishaps, so many that I knew exactly what to do with this non-sewn, glued-together pillow with a photo that didn’t show up right –

I covered it up.

This time I used an iron-on photo transfer. On both sides, so no matter which way Santino turns the pillow, he’ll still see his Poppy.

I wrapped the pillow in tissue paper and put it in a big gift bag and headed to Tino’s birthday party at the park in Sacramento, about 40 minutes from my mother’s house. It was a long, long day for this gramma and I had to leave before the cake and presents.

It’s true, I had to leave. But I also knew that he might feel awkward and happy/sad when he saw the pillow in front of all of his family and friends.

It’s an emotion that me and him are really used to feeling now.

He wasn’t happy/sad when I told him I had to leave though. He was just plain sad.

“Gramma, my birthday is still happening though.” This, as he was swinging on a swing with three of his cousins.

The next morning his mother called about 10 minutes before my aerobics class. This freaked me out because we usually text message. I was afraid something was wrong so I immediately called her before I had to teach.

“No, everything’s fine. I just wanted to tell you what he said about his pillow.”

Phew. My pulse calmed back down.

Santino is his grandfather’s son in many, many ways. In particular, he’s a night owl. Always has been and, I suspect, always will be. After his birthday party he took himself to bed early.

This was cause for concern. His mom thought he was sick. His stepdad checked on him. They both kept going in. “Are you ok?” Yes, he was fine. He just wanted to lie in bed.

On the way to school the next morning his mom quizzed him about the party, did he have fun, did he like his presents, how did he like the pillow.

“I love my pillow so much. Now the hole in my heart is all filled up.”

Gasp! He said what? His mom repeated it to me on the phone as my students were all waiting for me to start class.

Lord, how I love that child.

Lord, how he loved his Poppy.

The other day when I saw Santino I asked him about his pillow. The entire day of his party he had been intent on guessing what kind of present could possibly be better than a toy.

“Gramma! You made my pillow out of pants!” He acted it as if it was a silly notion.

Yes I did, Honey. And do you know whose pants they were?

“Yeah. My Poppy’s pants.” Then he smiled. And it wasn’t a silly smile.

I asked him if I could take a picture of him with his pillow. He’s used to me taking tons of photos, even more since Marlon passed. 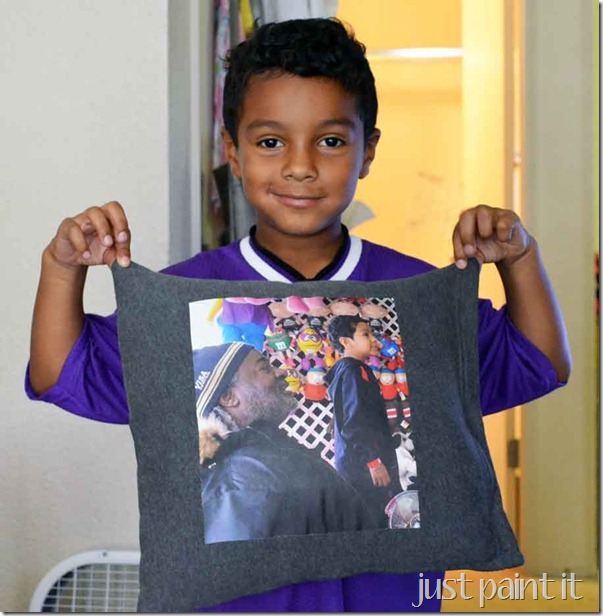 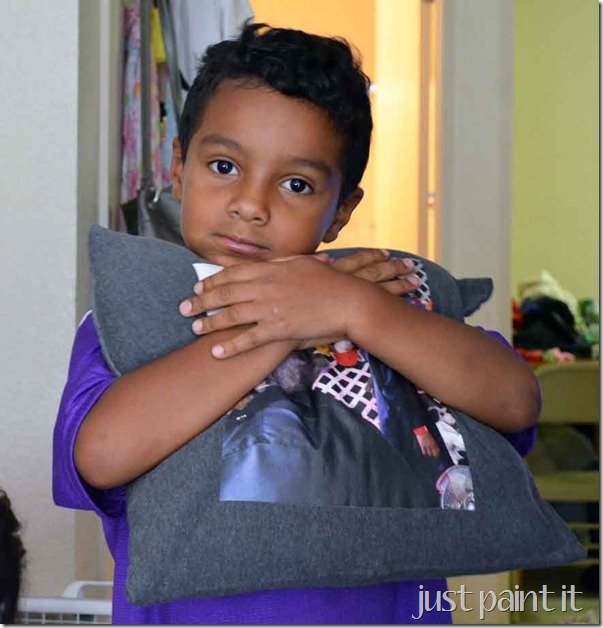 When I took this pic out of the camera to edit it, I saw it.

I can’t bring his Poppy back, no matter how badly I want to, but at least now he has a part, a small part, of Poppy to squeeze and hold.

The same way Poppy used to squeeze and hold him.