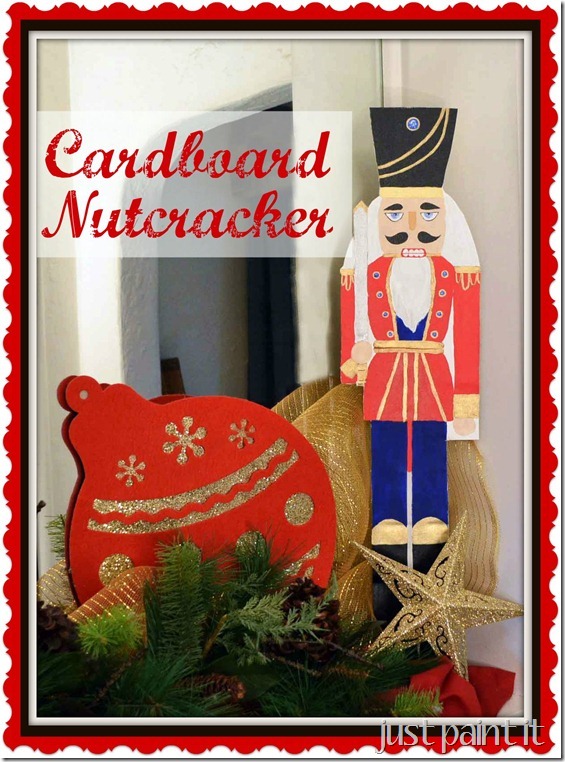 I love nutcrackers. It’s a newfound passion, developing over the past few years. I have no idea why. I just love them. A couple of weeks ago, the grandson and I were headed to the back of Target to that department. As usual. Normally he’s in a mad dash to get to the superhero aisle but this time an endcap display stopped him dead in his tracks.

When I finally caught up to him I saw them. Shelves laden with brightly colored nutcrackers of all sizes, shapes and themes. He was mesmerized. And so was his gramma. But eventually the call of the Ninjago was too loud for him to ignore so off we went.

Then the other day when I had a to-do list for my to-do lists I just stopped and said, “I’m gonna paint a Nutcracker for Santino.” A big one. Ever since the dollar store ornaments, I’ve been on an over-sized kick. The obvious thing would’ve been to paint it on wood but a) I don’t have any and b) I don’t have tools to cut wood and c) I don’t want to anyway.

Next best option? Cardboard! We moved here nearly 2 years ago and I still have every.single.box. They’re broken down but piled up in my shop. I kept meaning to get them to the recycler, but now I’m glad I didn’t. I got plans for those boxes.

If you love nutcrackers like I do, I think you’re gonna like this project. It’s really simple painting. Nothing fancy. Oh, and I drew the pattern for you too.

I started with brown craft paper. The black & white pattern is at the bottom of this post. You can just print it off, take it to Kinko’s or OfficeMax and have them enlarge it to whatever size you want. 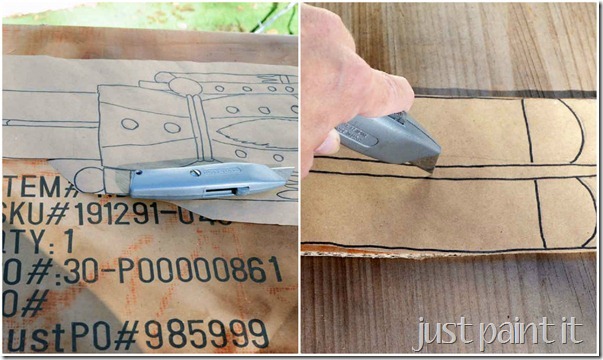 After drawing him, I just found a 30” box and cut him out. Then I cut in between his legs, almost up to his knees, so I could insert a ‘stand’. 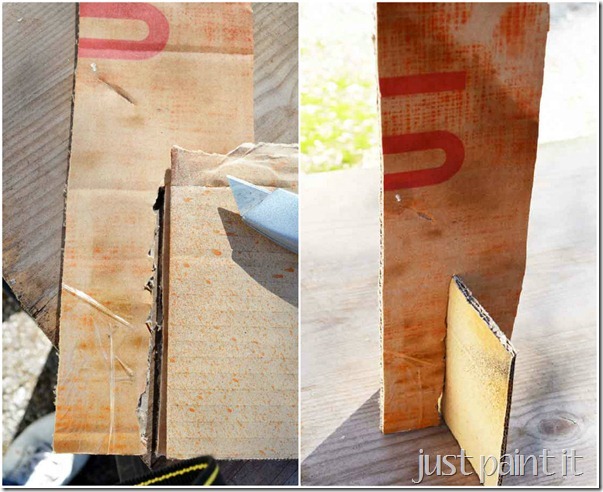 The ‘stand’ is just a small piece of cardboard you slip in. (I’ve been paying attention to all the dollar store stuff I’ve been playing with.) 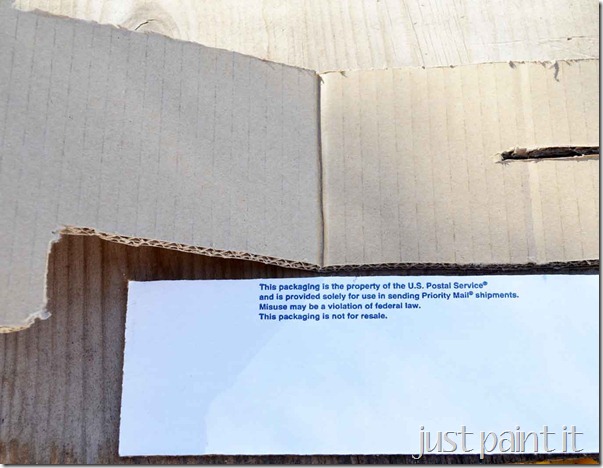 Even though my box was big, there was a fold that was making Phil wave to and fro.

I haven’t settled on his name yet. So I’m back ‘n forth between Phil Bert Nutcracker and Wall E. Nut-cracker. I’ll let Tino decide but something tells me he’ll have his own ideas. 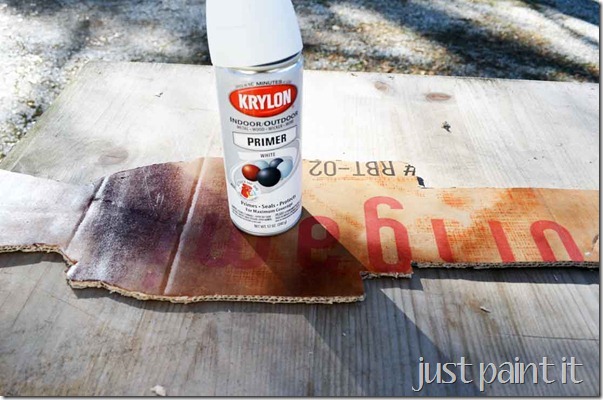 At this point I sprayed Wally with white primer, thinking I was going to paint right on the cardboard. Which, by the way, would’ve been the easiest thing to do. 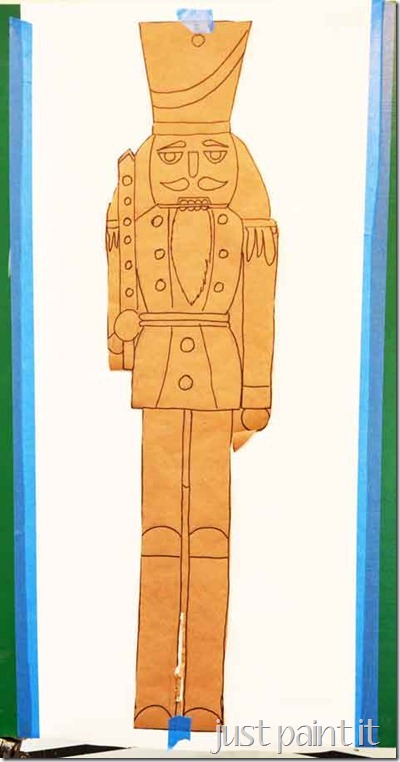 And here is the pattern on a piece of artist canvas. Just because something makes sense and would be easy doesn’t necessarily mean that’s the way I’ll do it. *sigh 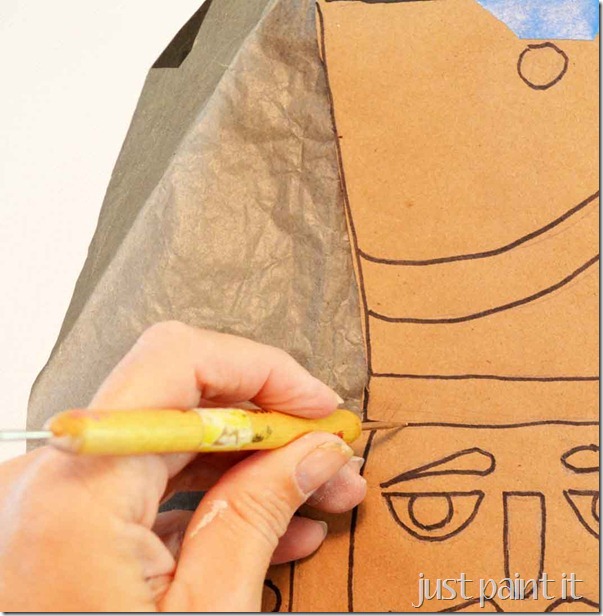 I transferred the pattern with graphite paper & a stylus.

Then I stood back. If you’ve read any of my posts then you’ve heard me say, “Stand back from your work to get a better perspective.” Trust me. It took me years to learn this (and I often forget) but it’s a biggie.

When you’re painting, you’re about a foot away from your painting surface and you think you know what it looks like. But then you stand back a few steps and things look a little different.

Do you see it? The crooked boots? I didn’t see it at first either. Here’s another ‘secret’. Well, let’s call it a ‘tip’. Since I’ve never taken art classes I have no idea what’s a secret and what’s general knowledge, ok? 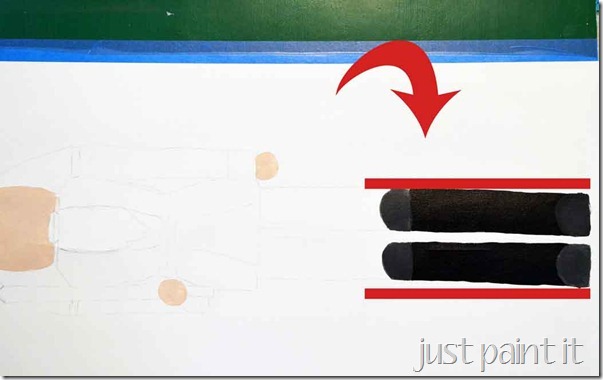 Tip your painting on it’s side. Upside down works too, btw. Of course, if you’re painting on a wall you can’t do this, haha. For some reason when you tip the picture you’ll see if anything is hinky.

“Hinky” def: not lined up properly. 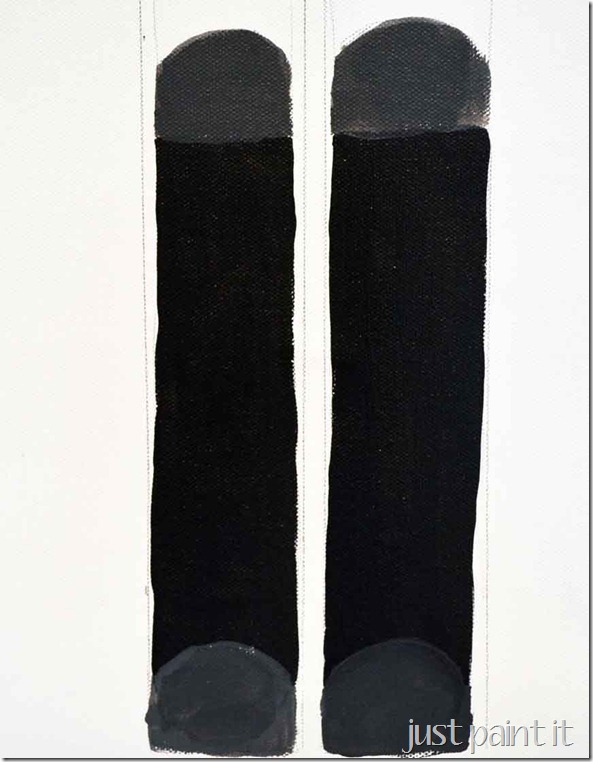 Note the pencil marks in the above pic. That’s how much my freehand drawing was off. I used a T-square to even the legs out.

Keep that in mind if you download my ‘pattern’.

Once the legs were straightened out I painted some bright blue for his pants. And, yes, the bottom of his coat, but I changed my mind about that later. 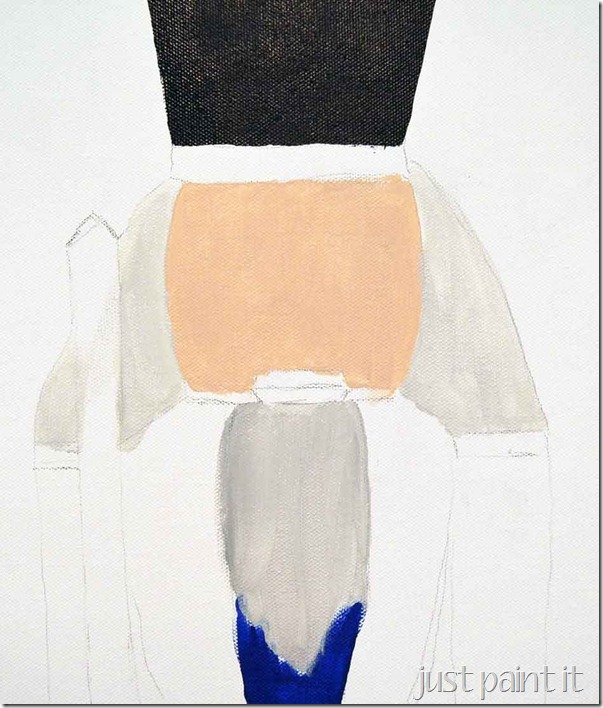 His face is some skin tone-y color. Even though I wanted to keep everything really simple and straightforward, I wanted a bit of depth to the hair and beard. So I did a bit of underpainting with a light-medium grey. 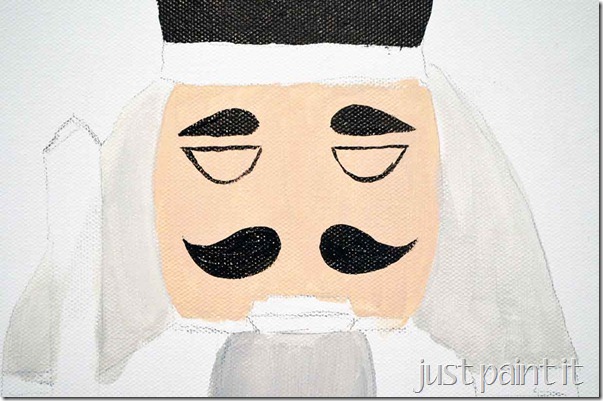 While the grey was drying, some more black details. 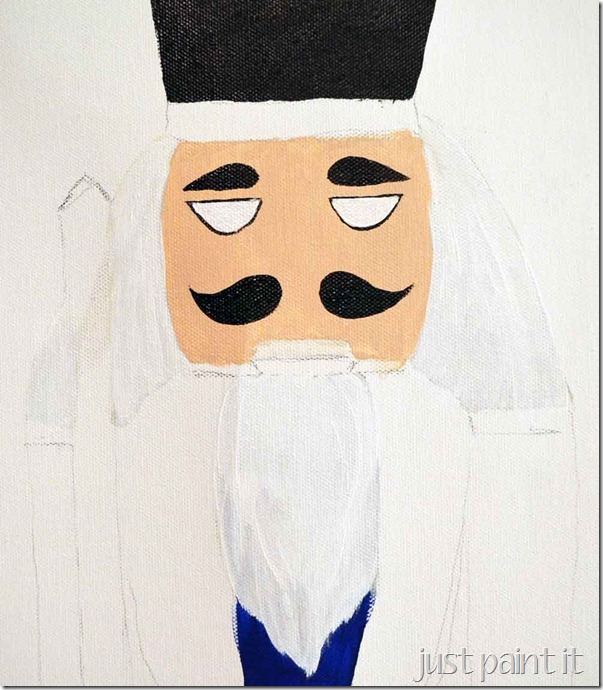 Then topcoat the hair & beard with white. 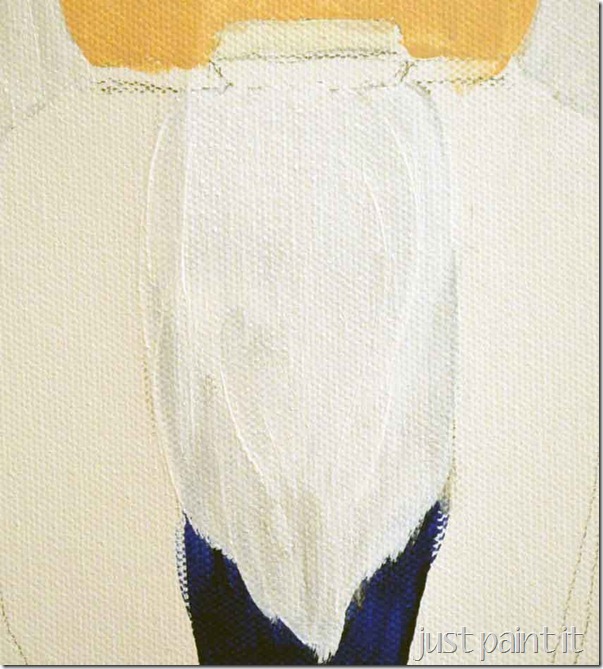 See how the grey pokes thru a bit? Just a hint, but it’s enough.

And then pow, the red. 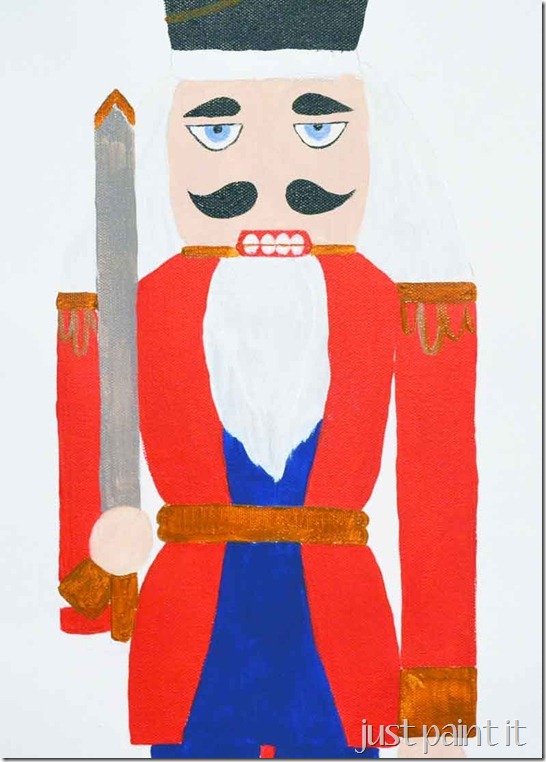 Before painting the gold accents I underpainted with a medium goldenish brown. Metallics can be funny so I like to underpaint with a matte color first. 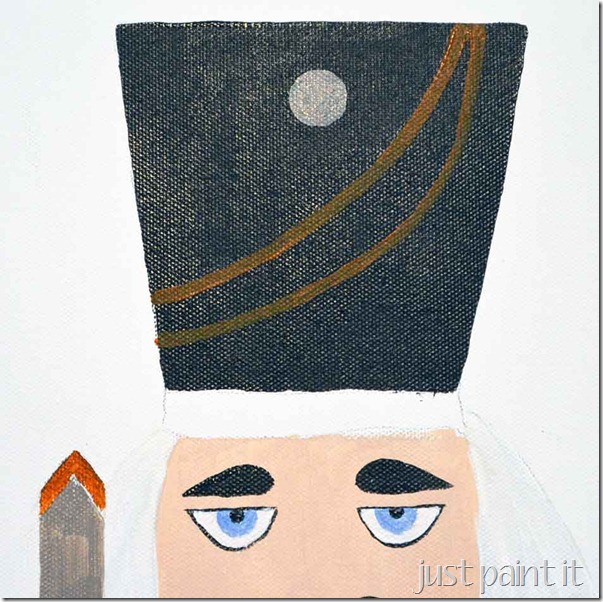 Now. Why did I even take this photo? The hat? The eyes? I have no idea.

Here’s the hat and there are the eyes. 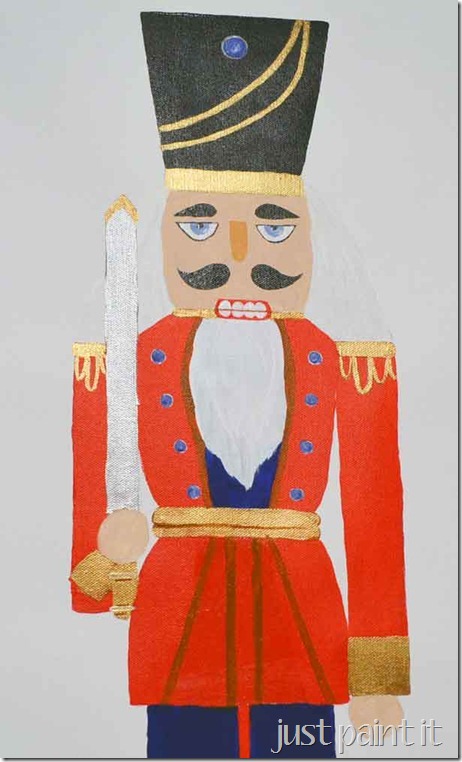 And here are the gold accents. I covered up the blue on the lower part of his jacket. 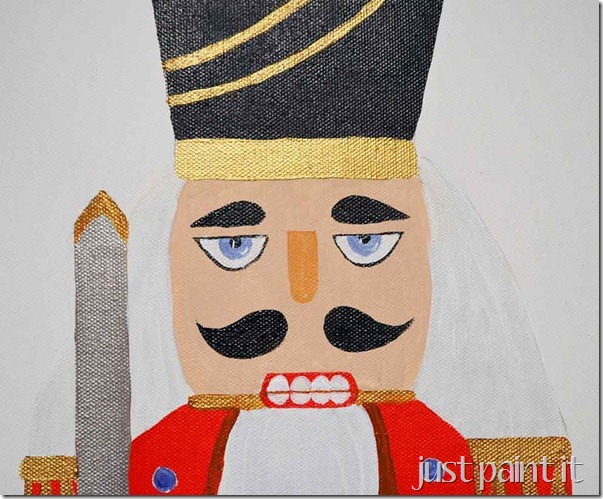 His nose is the flesh-colored paint with a little brown mixed in.

I made the top of his boots gold too. Just ‘cause.

Once the canvas was dry I cut it out – after laying the cardboard outline on top of it to make sure I wasn’t too far off. 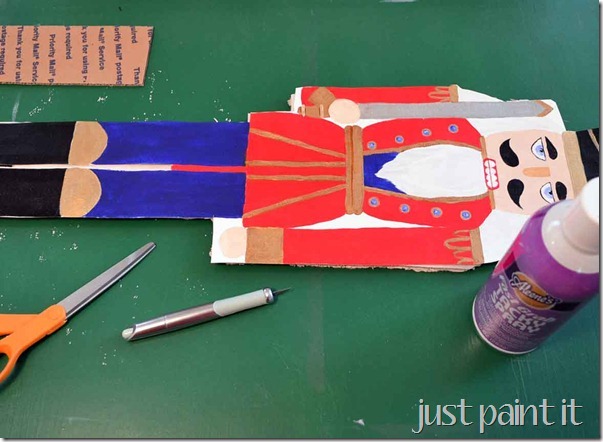 Phew. Not bad. The canvas adhered to the cardboard nicely with spray glue.

But it would’ve made a whole lot more sense to just paint the cardboard in the first place. Too late now. 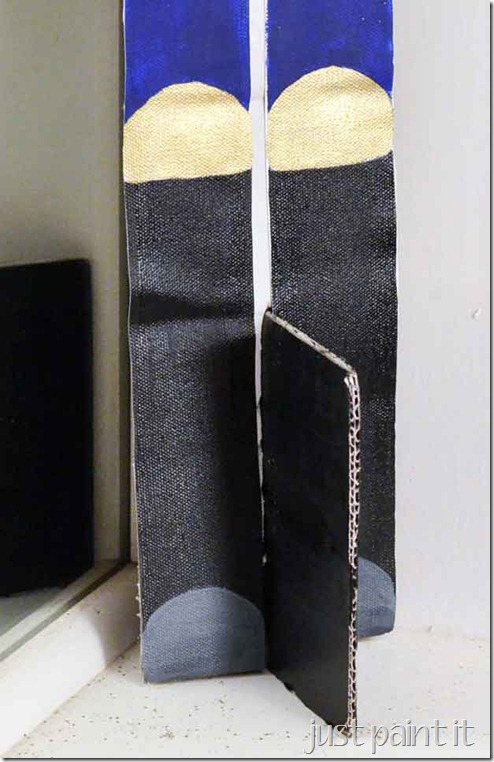 The “stand” was painted the same black as his boots. 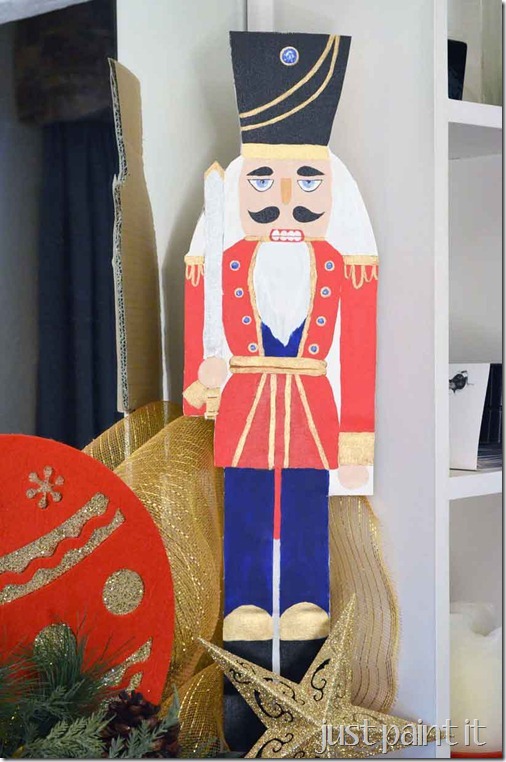 And here is Mr. Nutcracker, in all his splendor, right next to the over-sized dollar store ornament.

Now, technically, this isn’t my mantel. My mantel isn’t quite decorated yet. But I wanted to link up to Layla’s party today so I’m calling this built-in shelf my mantel. Ok?

Besides, Mr. Nutcracker is just visiting. In a few days he’ll be heading to the home of a very special 5 year old who happens to love his gramma’s paintings.

Here’s the nutcracker pattern for you. I hope you paint one this year! It really doesn’t take long at all and you can use whatever colors you want and make him whatever size you want too!

I also hope you’ll drop by The Lettered Cottage today. All week, actually. Layla’s link parties are incredible and hundreds of bloggers link up beautiful projects. It’s so much fun!