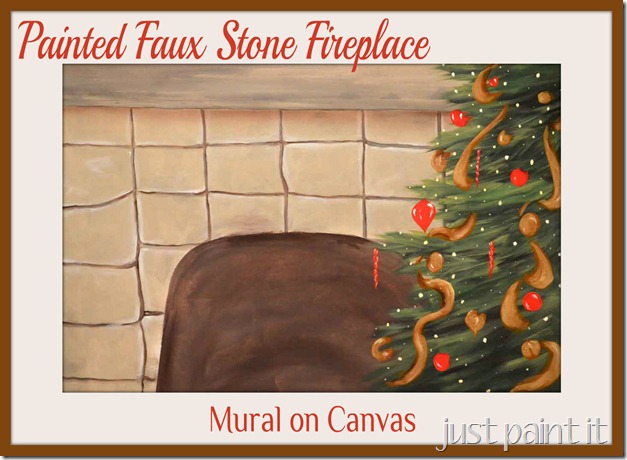 Some of you know I’ve been doing Google+ Hangouts on Air recently – live video broadcasts. Turns out, they’re pretty fun. So much so that I’ve scheduled them for every Tuesday night (except for Christmas & New Years Eve, of course.) I’m nowhere near a ‘pro’ or anything, but I do enjoy sharing how to paint on video.

Last Tuesday, in the midst of decorating the house, two other paint projects and who-knows-what-else I decided I ‘needed’ to paint a canvas backdrop for the Hangout. For that night. At 6 pm.

Go ahead – call me Crazy. You certainly won’t be the first, or the last.

I figured only a portion of the canvas would show on camera so how long could it take? Now, most people would’ve set up the webcam and mark off the portion of canvas that would be in the shot.

I’m not most people, however.

Anyway, I decided on a Christmas tree and fireplace – a warm, homey scene – painted on a piece of canvas that I can roll up, store, and then paint something for after the holidays. 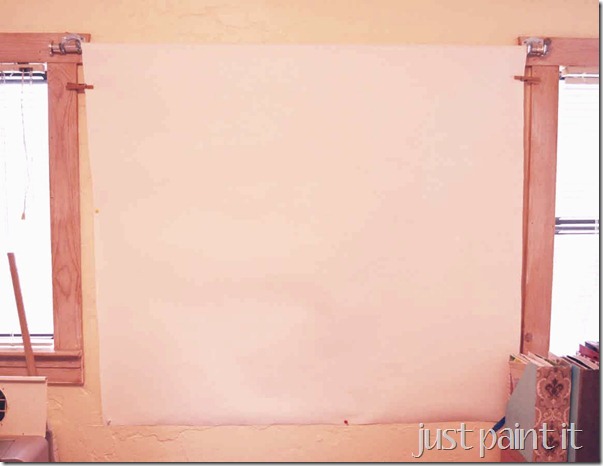 I cut a piece of canvas ‘about so big’, draped it over a pole and tacked the bottom edges down. 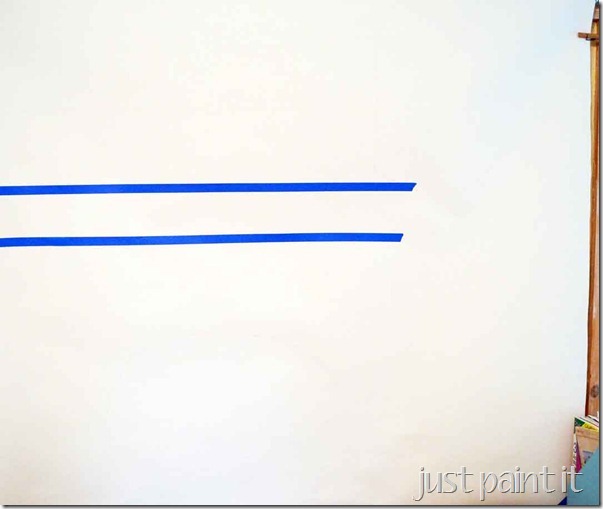 I wanted a mantel too even though I wasn’t sure if I’d get it painted by ‘showtime’. So I eyeballed it with two pieces of painter’s tape.

Over the years I’ve painted quite a few faux stone murals. Like the red brick arched windows, the his ‘n hers bedroom murals, and the church stage sets to name a few. 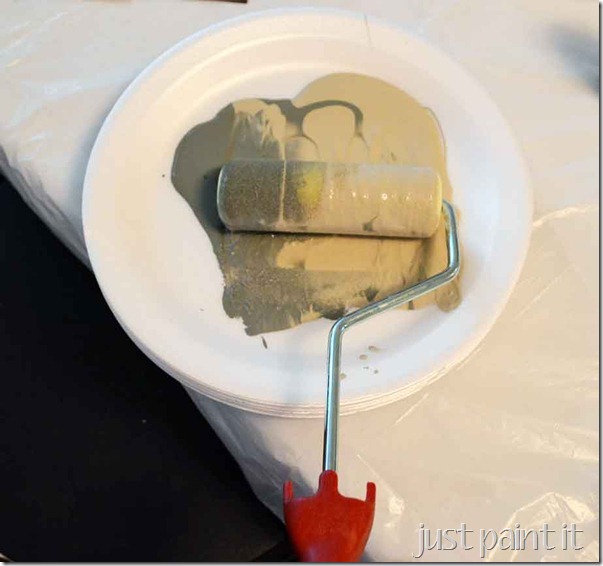 I used to use sea sponges to apply layer upon layer of paint. Now I just grab a foam roller, squirt a couple of paint colors and go to it. This time I used a medium grey and light tan. 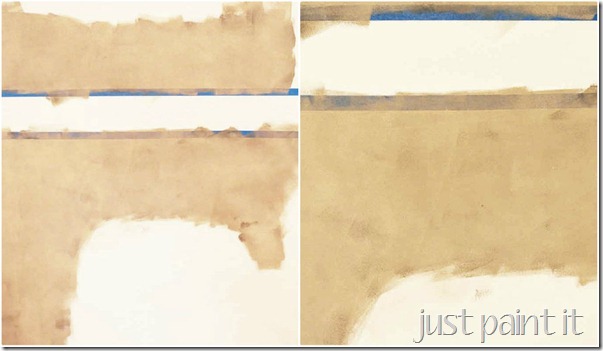 Then I just roll it on in a random way. The pic on the left is from about 6 feet away and then I zoomed in to show you a close up. Not much difference. If you roll too much, the two colors will completely blend, which you don’t want. If you don’t roll enough, you’ll have roller marks. It’s actually better to have a roller mark or two rather than have one flat color. 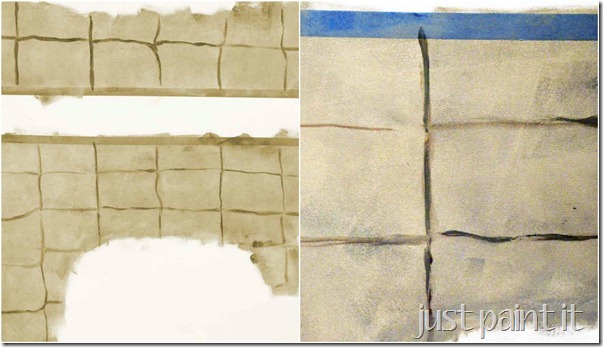 Next comes the “grout” lines. I mixed the medium grey with a deep brown and just painted vertical and horizontal lines. Again, I didn’t want them perfectly even or perpendicular, partly because it looks better this way and partly because I just didn’t have enough time. 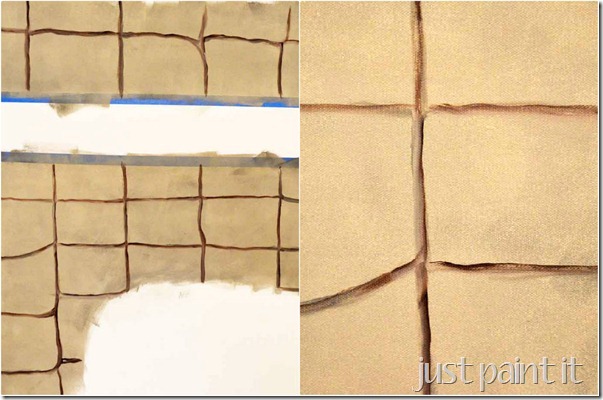 After the first “grouting” I came back with the deep brown and created shading on just two sides of each “stone”. If there was an obvious light source (which there isn’t) there’d be a theoretical reason where to shade and where to highlight.

We’ll get to that another time. Maybe. 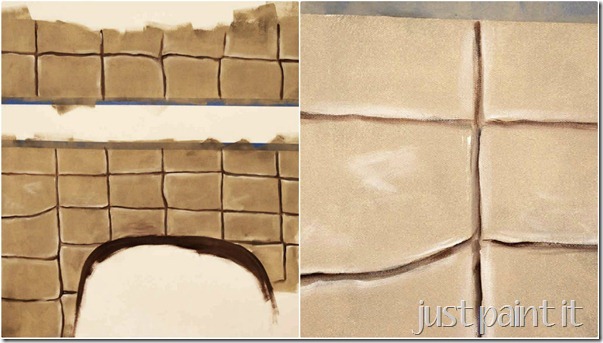 But what I always do (I think. Always? Hmm. Almost always. Yeah, that’s sounds better. A disclaimer.) What I almost always do is highlight right next to where I just shaded.

It looks better when you’re standing a few feet away, as in the left pic, but most murals do. That’s why I always (yes, always) tell my painting students to get up and stand back, even walk out of the room and come back in. It’ll give you a fresh perspective.

So that’s it – faux stone. I filled in the mantel with the same colors, just with horizontal strokes. I thought about some faux bois but, once again, not enough time. (I like that excuse. I think I’ll keep it.) Then the inside part – what’s it called? – I used the the dark brown mixed with a bit of medium grey. 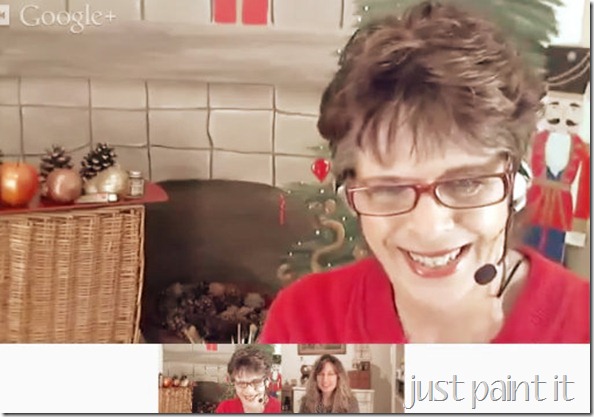 You do what you gotta do when you decide to paint a mural on canvas 3 hours before a live broadcast. 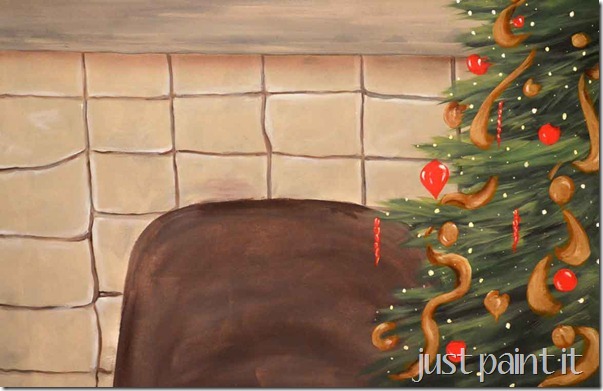 I’ll show you how I painted the tree later this week.

And I still need to add something to the mantel. Hey, I know! I’ll paint something for this week’s Hangout on Tuesday! Sure, why not? Maybe I’ll add some hanging stockings. Or a garland. Or both!

But what should I paint for the Hangout? sheesh. Decisions, decisions.

Tune in Tuesday at 6 pm PST/9 pm EST right here on the blog to see!