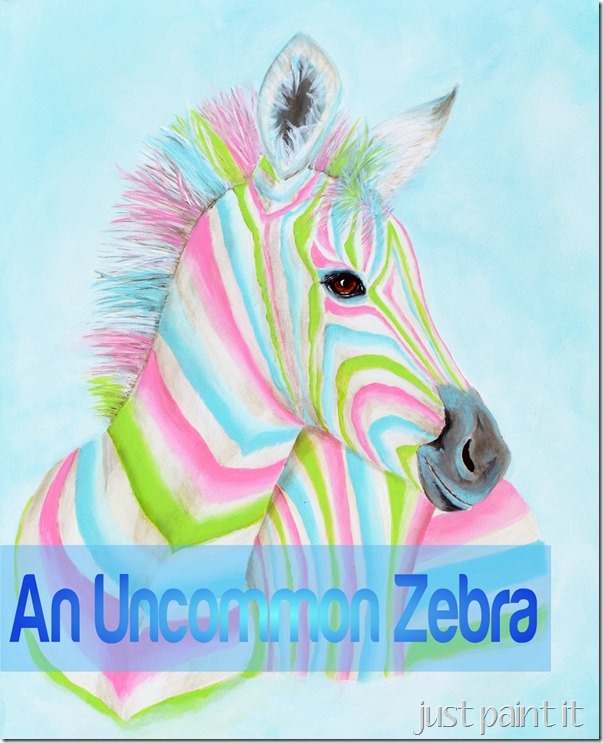 Some of you know how I got started painting, some of you don’t. In a nutshell, I sketched & painted as a kid, took one Art class in college and then quit painting for 20 years.

My teacher didn’t like how my paintings looked real. It’s possible that I might’ve been a touch over-sensitive. Just. Possible.

When I started painting again it was on walls in my house, which my friends saw and then asked me to paint something on their walls. Before I knew it, I was a muralist. Without a clue. I didn’t know anything about the business, much less about painting. But through the years I learned. Then our economy took a nosedive, about the same time I sustained a debilitating back injury.

Fast forward a few years and here I am, blogging and painting canvases. Blank canvases. Plain white canvases. At first that felt really freeing – I could paint whatever I wanted! But I’d relied on my clients for so long, their tastes, matching their interiors, that to create something of my own was the opposite of freeing!

I’ve been working on stretching myself creatively – trying things outside of my comfort zone.

That’s how this multi-colored zebra was ‘born’. He’s a cross between my normal “realism” and something “uncommon”. At least, for me.

The irony is, as soon as I started trying different styles & mediums, I also started getting new clients. (Maybe the long drought is over!) I did remember to take some in-progress pics, though. 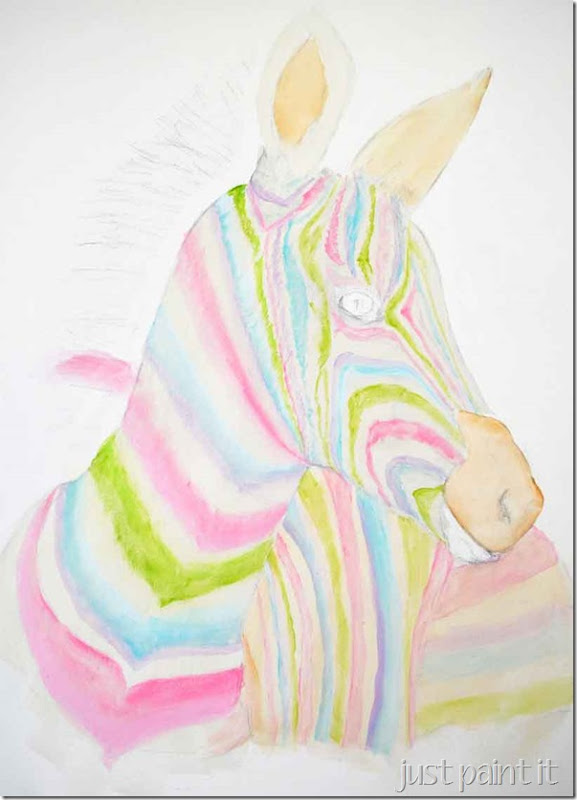 My first thought was to do a very soft toned effect, almost watercolors. I knew I wanted the different colors but I wanted them muted so they’d work in a child’s room.

You can see a touch of lavender next to the turquoise. That got painted out later. As did the wash of brown in the muzzle.

I decided it was too hard to work on this guy without his eyes being painted. (Not sure when he became a male either. I think it was after I painted his eye.) 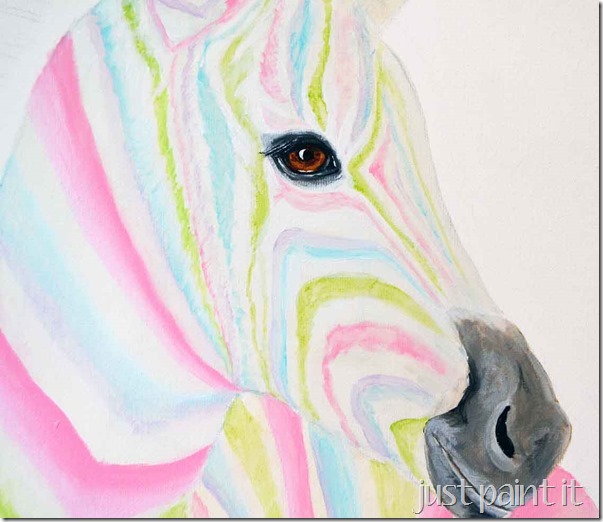 Much better now. He has an eye and a nose and mouth. And some personality. 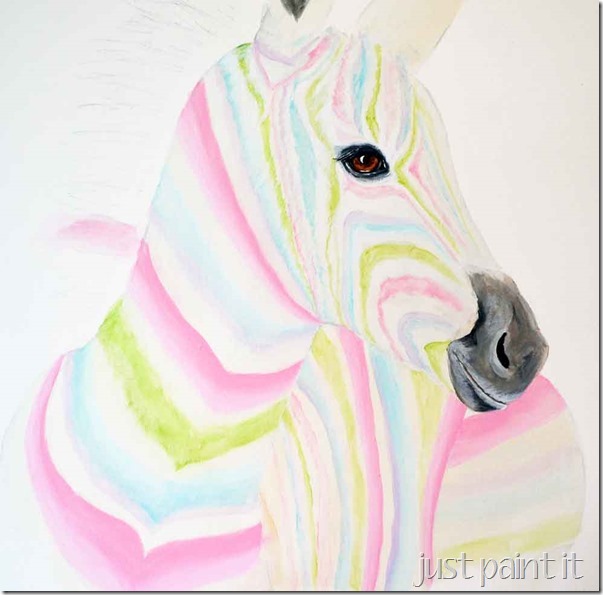 But the soft colors were just too soft. I could’ve lightened the eye or made it turquoise or green maybe, but that was too much of a stretch for me right now. 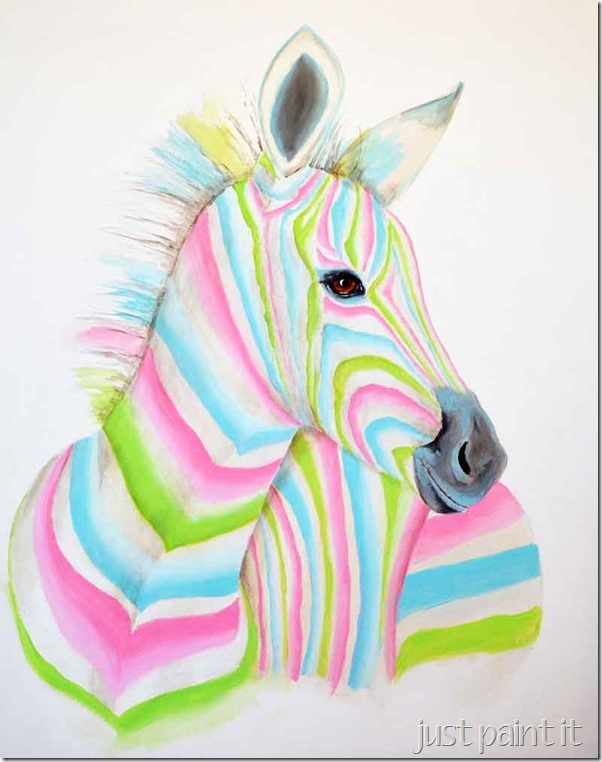 I just darkened his stripes. Or, made them more vivid actually. The colors are the same I had used from the start, just full strength.

I spent quite a bit of time trying to achieve an ombre effect in each stripe. I finally ditched that because you couldn’t really see it from 3-4 feet away.

Plus, I needed to add some more grey touches besides the eye and muzzle. So I used a grey wash for shading as well as in his mane. 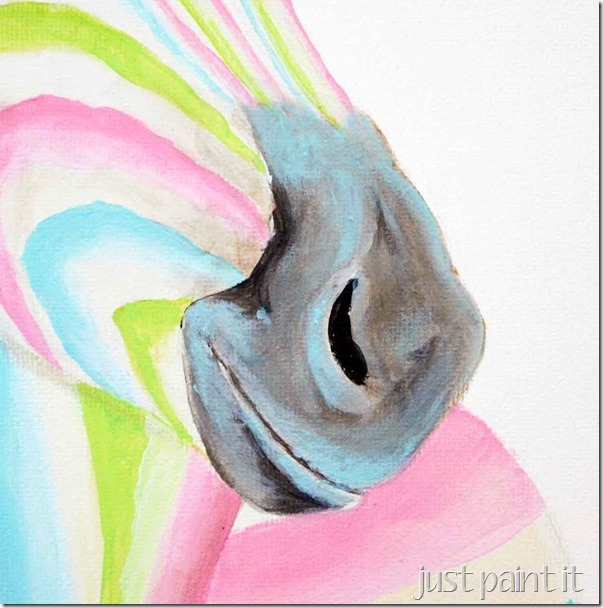 I also softened his muzzle with turquoise, which looks more like a light grey from a distance. 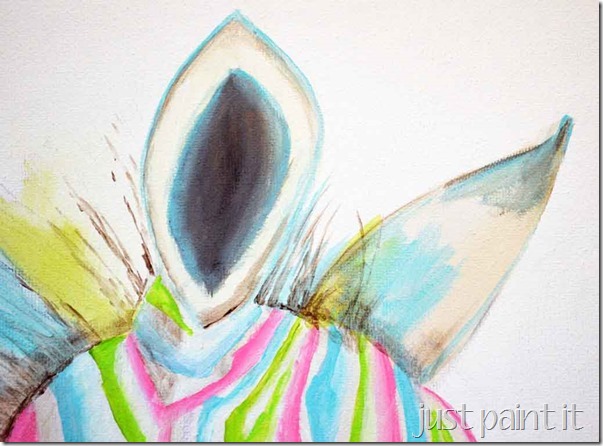 I also used more turquoise in his ears. And you can see the strands of grey in his mane here. 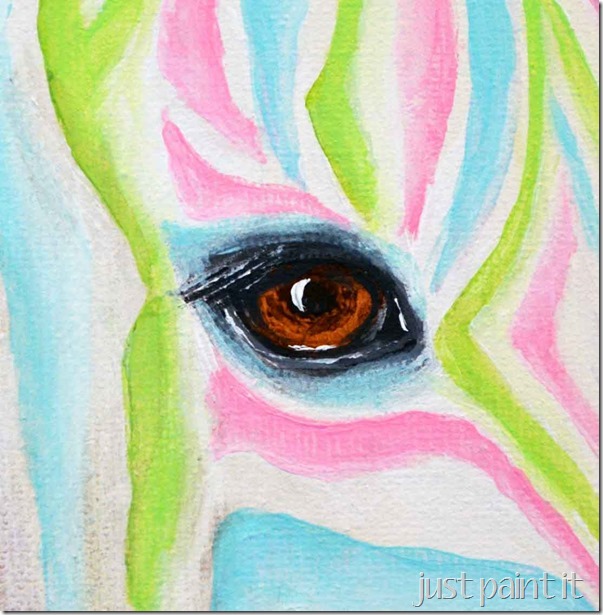 Most of the eye I left the same, just adding some turquoise surrounding it. 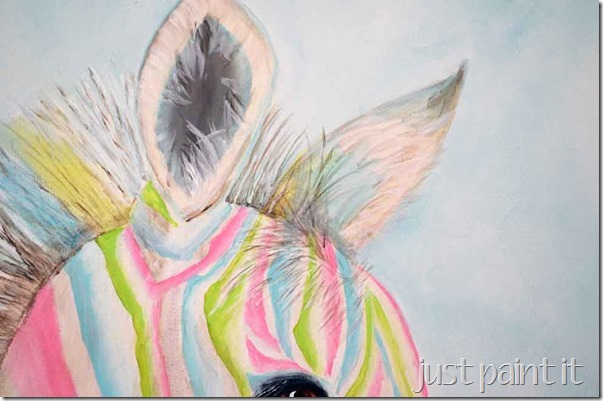 This guy is actually a baby zebra. Could you tell before I told you? Well, anyway, they have some ‘baby fuzz’ on their foreheads. I started with grey to underpaint the shading and direction of the ‘fuzz’. 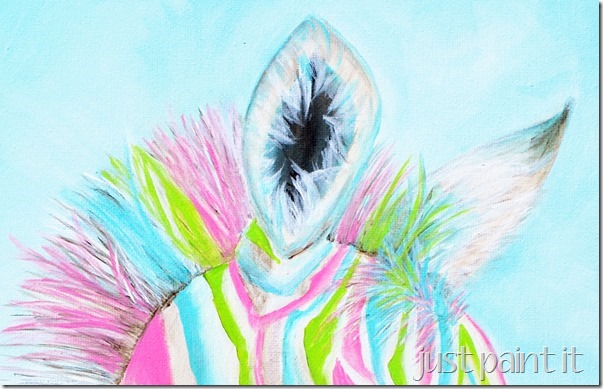 Then I came back with white and the stripe colors on the forehead and his mane, as well as some white fur on his ears. 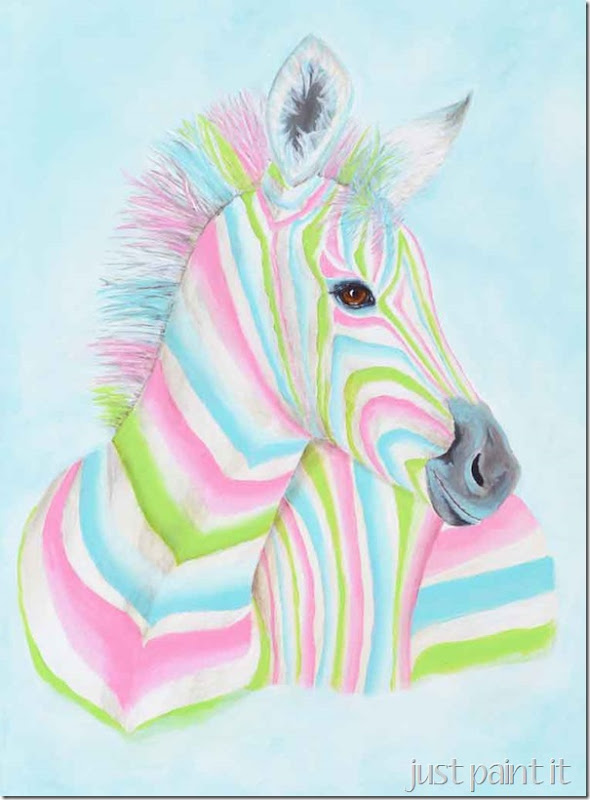 This photo has better lighting. It was a bit overcast today so I took him outside to get some nice shots.

What do you think? Part of me thinks he should be a unicorn, with all of these colors. Some people on Facebook & Instagram mentioned painted burros in Tijuana and another animal somewhere else. I’ll have to look thru my comments.

He didn’t turn out at all like I originally thought. But that’s fairly normal for me, unless I’m painting for a client. For custom paintings I usually give clients a quick rendering so they know what to expect, then I email in-progress photos so if I veer off course, they can tell me. But this guy is just for my shop. I think he’d be awfully cute in a little girl’s bedroom or playroom.