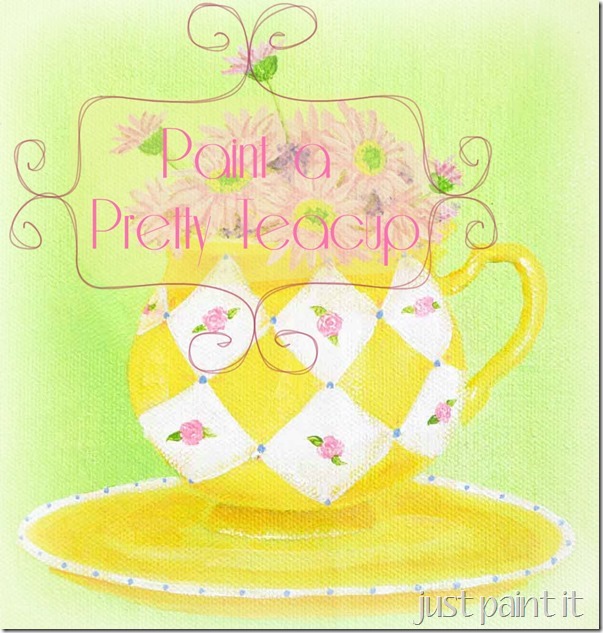 Before we get started with this painting tutorial I want to say how completely touched I was by your comments on my last post, Time For a Change. I’m always amazed at how sweet and supportive Just Paint It readers are. Thank you so, so much.

Okay, let’s paint a pretty little teacup. I don’t know why I’m so attracted to teacups lately. I don’t own teacups. I don’t even drink tea, for that matter. It could be my addiction fondness for Downton Abbey. But I don’t think that’s it either because I’m drawn to designs that are a bit more whimsical, along the lines of Mackenzie Childs, sort of. I just like painting teacups, and I hope you will too. Today I’ll show how to get a dimensional teacup using shading and highlights in layers. One of my favorite things to do is make something look dimensional with just a few layers of paint. Give it a try. It’s not hard at all and then you can ‘decorate’ your teacup any way you want. 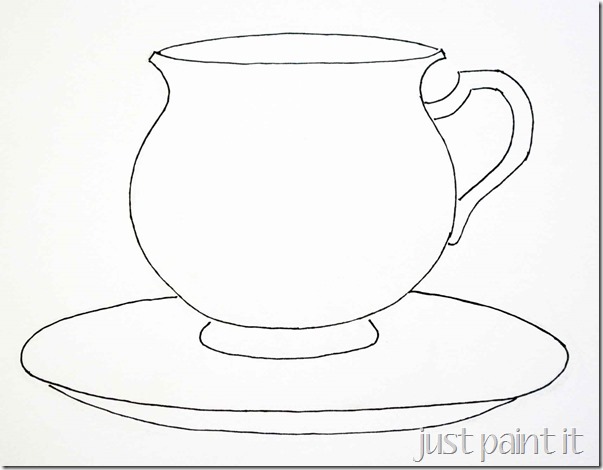 In case you missed the teacup and teapot printables from last week, here’s the pattern for this one. Start by basecoating the cup with a light to medium yellow. (I forgot to take that photo.) 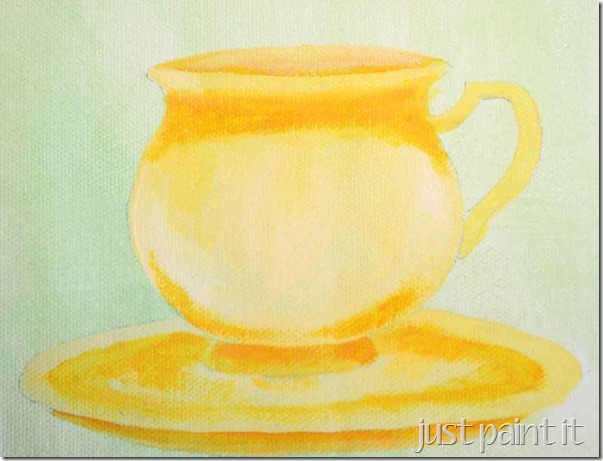 Then add shading with a yellow that’s a couple of shades darker than your basecoat. 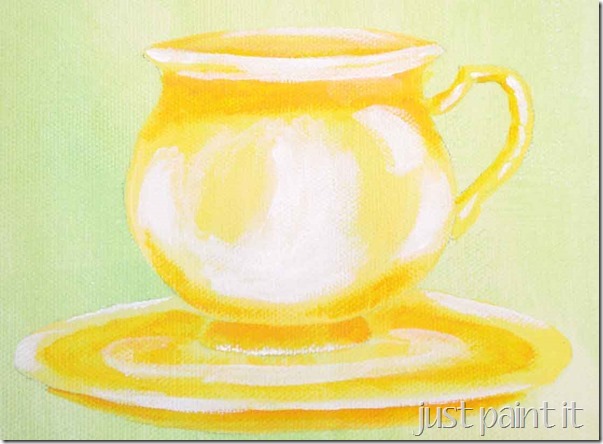 Next paint your highlights with white. You might need a couple of coats to get a fully opaque white. 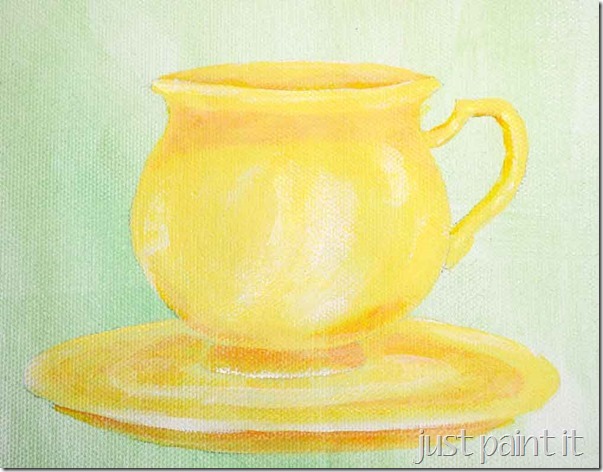 Then cover the shading and highlights with your basecoat color. When it dries you’ll be able to see the shading and highlights, just not as obvious. From here you can leave it as is, add a couple of white highlights, paint some flowers either inside or on top of the teacup, or paint some harlequin diamonds. At this point I feel the need to tell you that nearly all of my paintings are really just doodles. I’d love to say I have a big Master Plan that I follow and each painting is well thought out. Um, no. I just doodle. Sometimes the doodles turn out cute, sometimes they don’t. I’ll let you be the judge of this one. 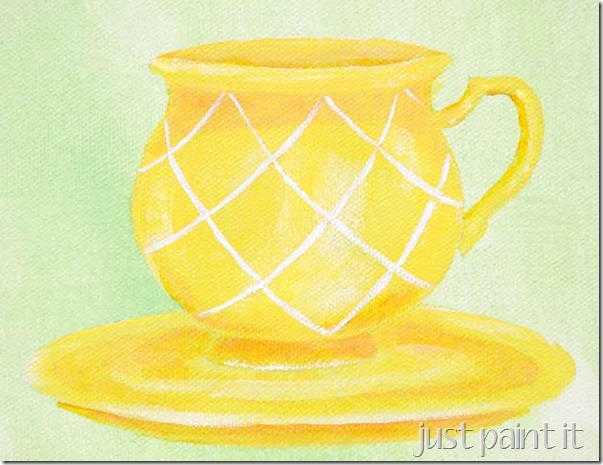 I outlined some white diamonds because the yellow seemed too, well, yellow. You can still see the shading and highlighting, which I liked, but also a lot of yellow, imo. 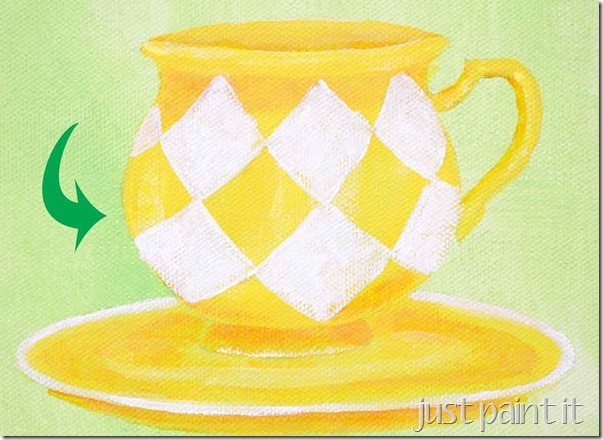 So then I filled in the diamonds with white. One coat did give complete coverage but instead of completely filling in the entire diamond, I applied a 2nd coat to the fattest part of the teacup. (where the arrow is pointing) Remember, highlights make things appear closer and shading make things recede. To get the fullness of the bowl, I added more white at the roundest part. Does that make sense? 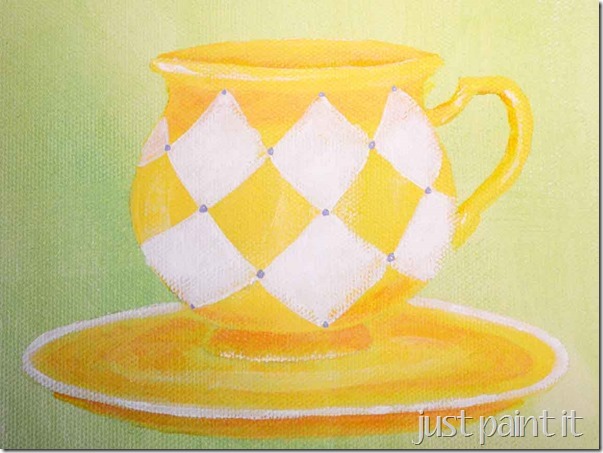 Ok, more doodles. I tried some teeny little dots of blue. I actually liked this look. Kinda like french country, except I wasn’t going for french country. 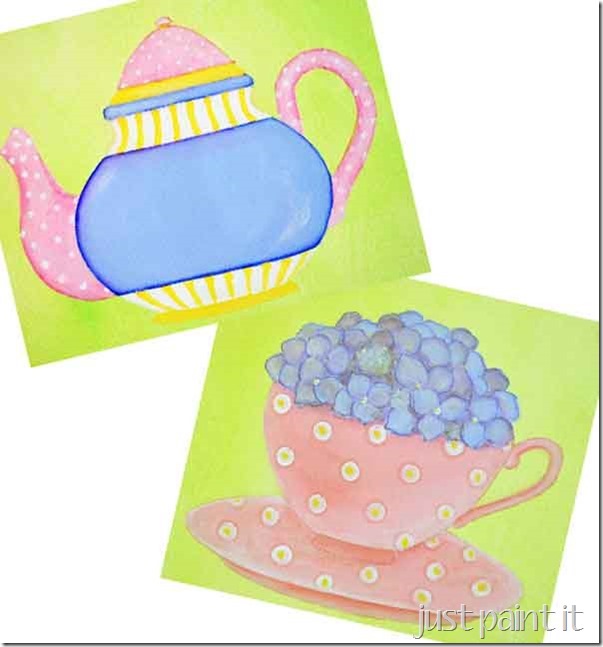 I wanted this teacup to go with this teapot and pink teacup with hydrangeas. See what I mean about too much yellow? Yeah, I’m still not sure if this works. ahem. Moving on. 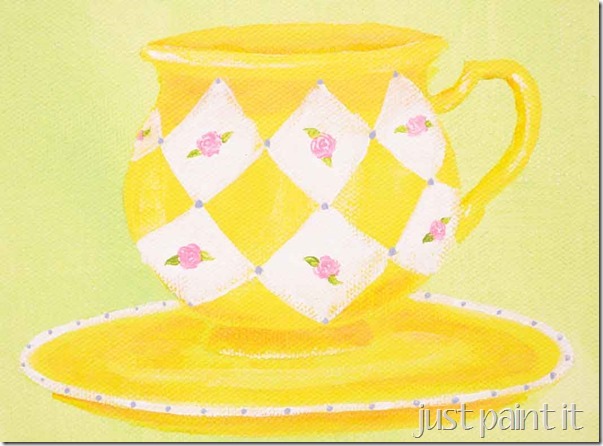 Maybe some little pink roses would do the trick? Kinda cute. Before you start thinking those roses are fancy or hard to paint or something, they’re not. 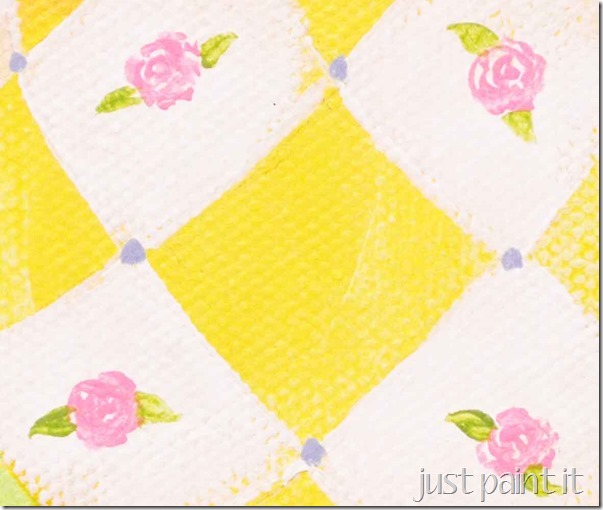 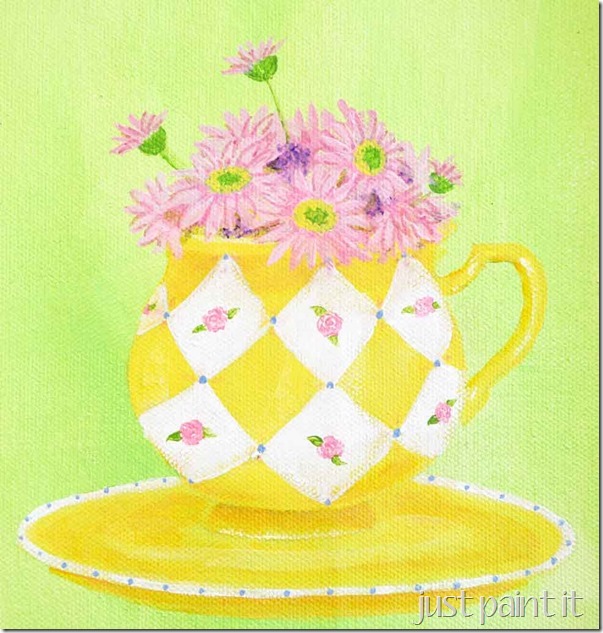 Then I added some pink daisies. Still pretty yellow though, dontcha think? *sigh But, even with all the doodles and squigglies and . . . . yellow, you can still see the dimensions of the teacup from the original shading and highlighting. Which was the point of this post. I might not have a Master Plan but I usually have a point. Somewhere in there.