Epic: extending beyond the usual or ordinary especially in size or scope

Yes, Part One. As in this post was so long I had to split it into parts. But, if you read this first part then the Moving Tips in the second part will make a whole lot more sense to you. Maybe. Maybe not. 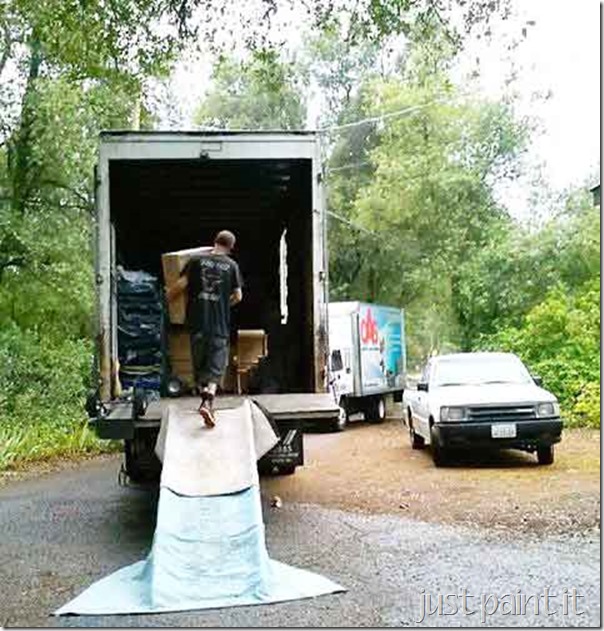 (There’s a reason why I’m sharing this move with you. Believe me, it’s not just to whine and complain. Well ok, maybe just a bit. But mainly, I want to tell you how badly prepared I was and the ramifications of that unpreparedness. And maybe I can help save someone, just a bit, on their next move.)

This had to be the worst move of my life, partially because I didn’t have Marlon and definitely because I was unprepared. To be fair, I didn’t have a lot of time. Our house had a 30 day escrow with a 3 week extension. That’s 7 weeks to find a new house and pack everything up. Sounds reasonable but I didn’t start packing until we found the new house. If the new house was small, we’d have to rent a storage unit. We were lucky and found a large house, only by the time we did I was weeks behind schedule.

Keep in mind as you’re reading this, I’m 55 years old with a bad back. Rather than Sex in the City, think Widows in the Country, mkay?

Originally we were going to hire a couple of guys and a Uhaul truck. Man, if we’d done that we’d still be making trips back and forth between houses. “Lucky” for us the first pair of guys fell through. So we found another couple. And then they fell through. We had no choice but to hire professional movers. I called a few local companies around Placerville.

One estimator came out on Sunday morning at 10 a.m. I already liked this guy before I met him. He walked thru the maze of packed, nearly packed, and not-packed-yet boxes and gave us what seemed to be a fair bid. Higher than we wanted to spend, but we were in a jam.

The next day, Monday, I called their office at 8 a.m. to schedule the move. They only had Tuesday available that week. Since we were supposed to be totally OUT of the house by that Thursday, I had no choice but to take it.

I did my best Monday but it wasn’t near good enough. I was up past midnight and started in again at 5 a.m. By 7 a.m. I was near tears because I knew we weren’t ready. At 7:30 the owner of the moving company called to ask if they could come early.

EARLY?!? I am SO not ready. “Don’t worry,” he assured me. They were used to this and they’d come and pack up what needed to be packed and move it all.

My tears of frustration and anxiety turned into tears of joy. Especially when I saw not two, not four, but SIX guys show up. Plus the owner!

Mom grabbed Sadie and sat in our car so they were out of the way. I basically stood back and watched in awe. It was drizzling a light rain – could my luck get any worse? – but nothing deterred these guys. It took them nearly four hours to load everything, plus they had to go get an extra truck, and then another for a “dump” run.

Yeah. Cha-ching. I saw dollar signs flashing before my eyes, but what else could we do? This was our only option and I thought these guys were wonderful.

Oh, there was a little confusion about the stuff in my shop. “This is junk, right?” No, that goes. “It goes to the dump.” No, it goes to the house. Apparently they haven’t moved too many DIYers.

You know, I knew this was going to be a tough move for a number of reasons: 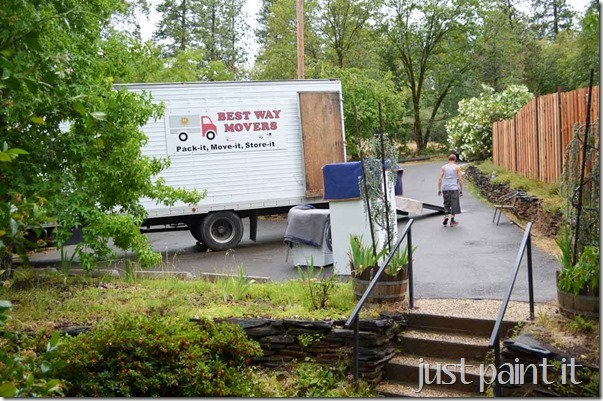 These are the stairs coming down to the front walkway. 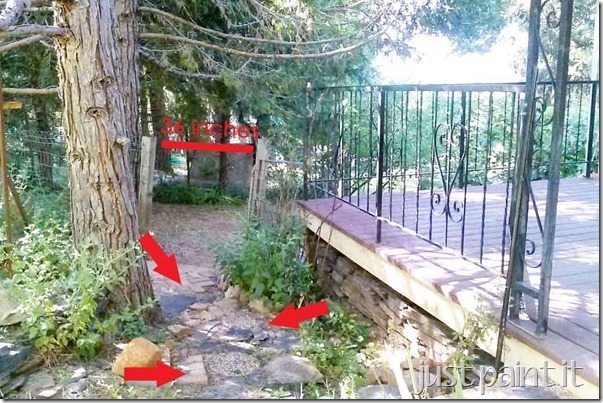 This is the pathway around the side, going to the downstairs. All sorts of uneven pavers and bricks. But, the opening with the gate off is 36 inches wide. 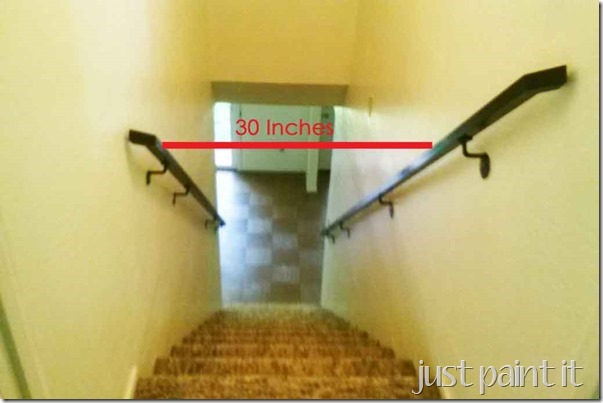 The stairwell, on the other hand, only had a 30 inch clearance between the two handrails.

Seemed like a no-brainer to me. But then, I wasn’t the one hauling a big ol’ refrigerator either. 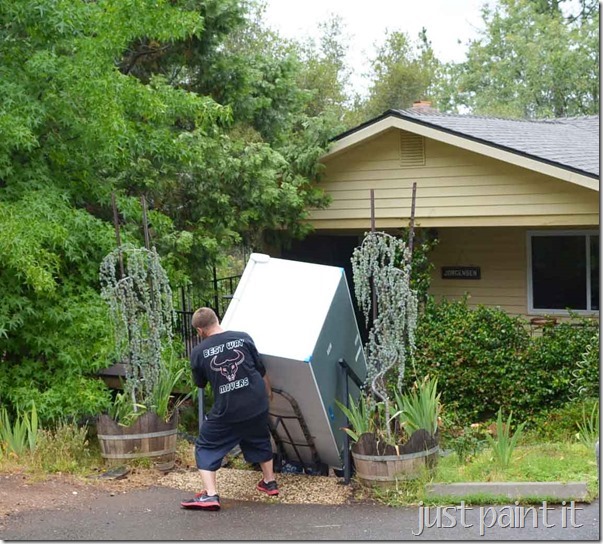 First, down the four stairs. Oh, that’s Dakota, the owner’s son. Dakota is a rock star. (You can tell him I said that too.) 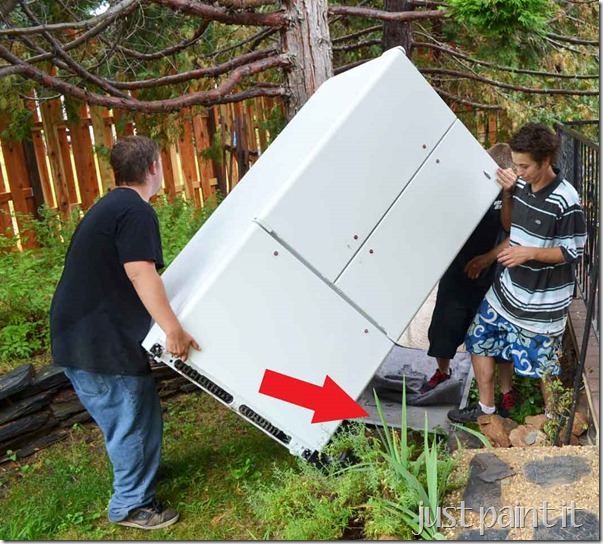 Even with the handles off, this fridge wasn’t going down the stairs, so Dakota took the truck ramp and laid it over the uneven pavers. Smart guy.

The refrigerator was going in the downstairs kitchen because the house already came with a fridge in the upstairs. It seemed rather pointless to move that one downstairs and this one upstairs. Plus, more time equals more money and we were already over budget at this point. 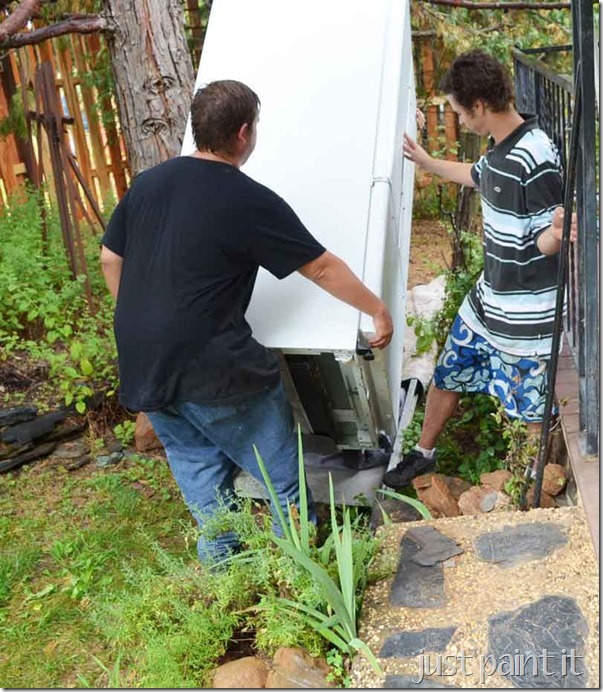 So far so good. I’d moved so many times with my husband, who was 6’4” tall, very strong and very smart, that I’d totally taken for granted how hard and tricky it is to move these things. 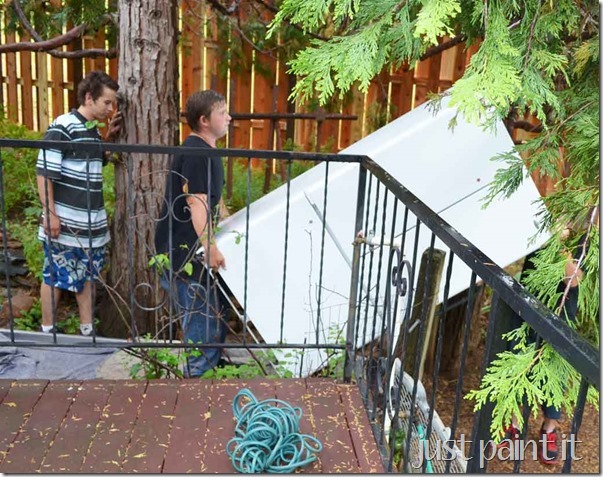 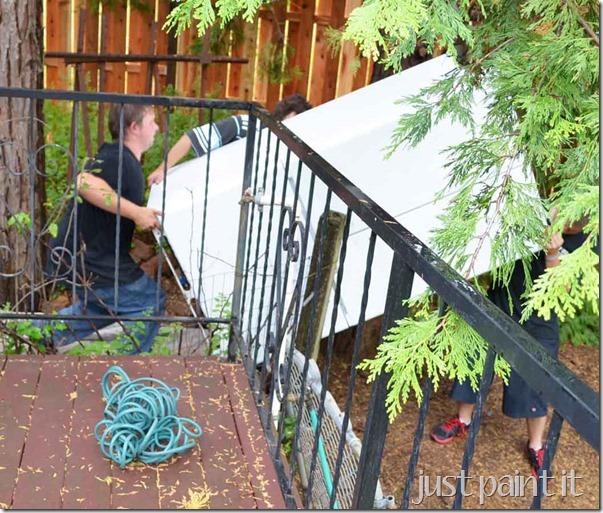 Look out! Um, apparently a straight ramp across uneven pavers makes for an uneven drop at the end. 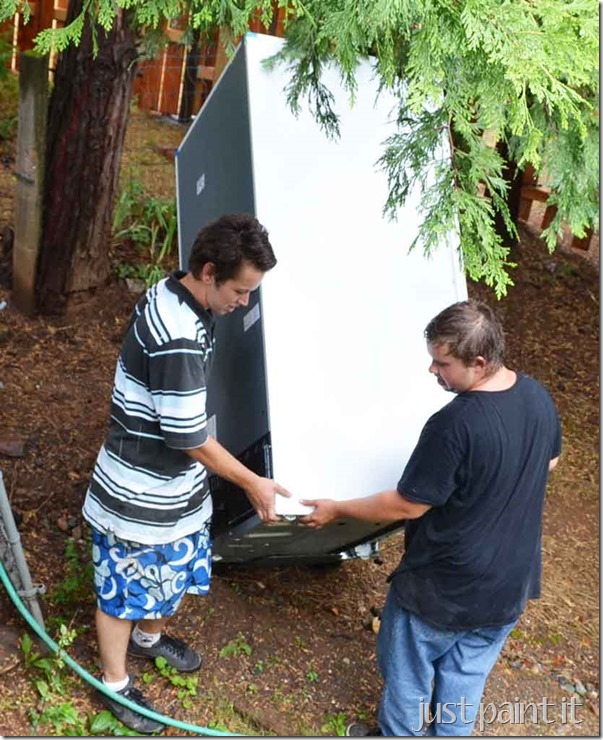 But Dakota finally managed it and they were off down the hill to the downstairs. 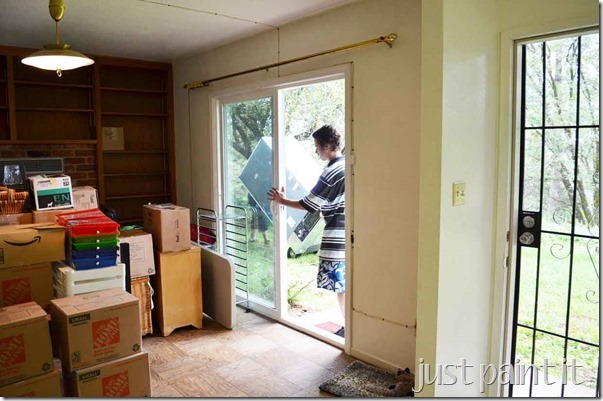 The sliding door or the small one? Let’s try the slider. 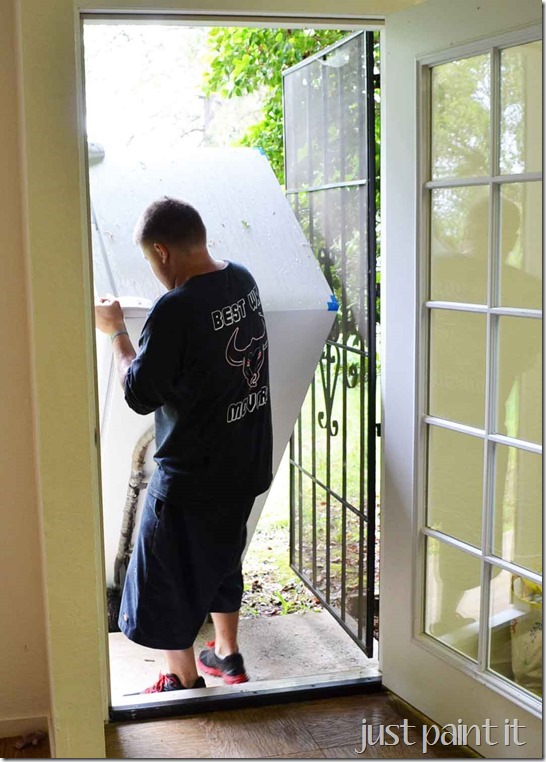 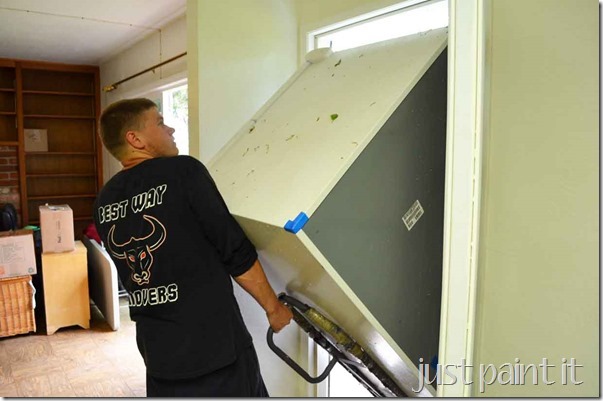 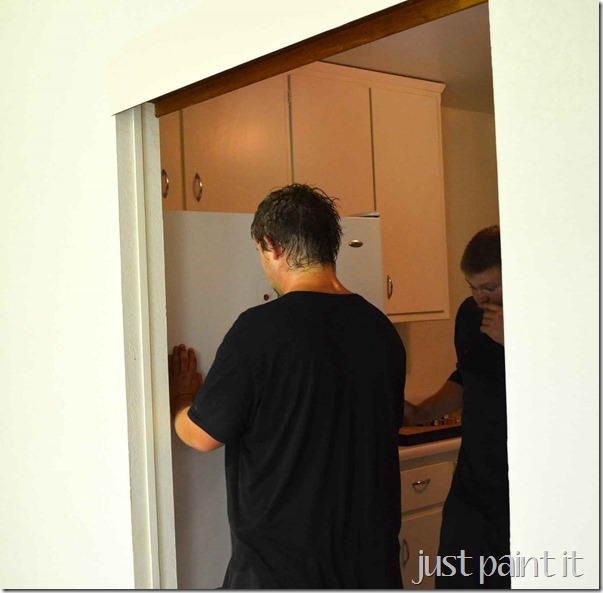 Wahoo! I have a refrigerator in my own little kitchen!

Now, by this point, we were all pretty tired. Even these young guys. They’d been at it for 6 hours. 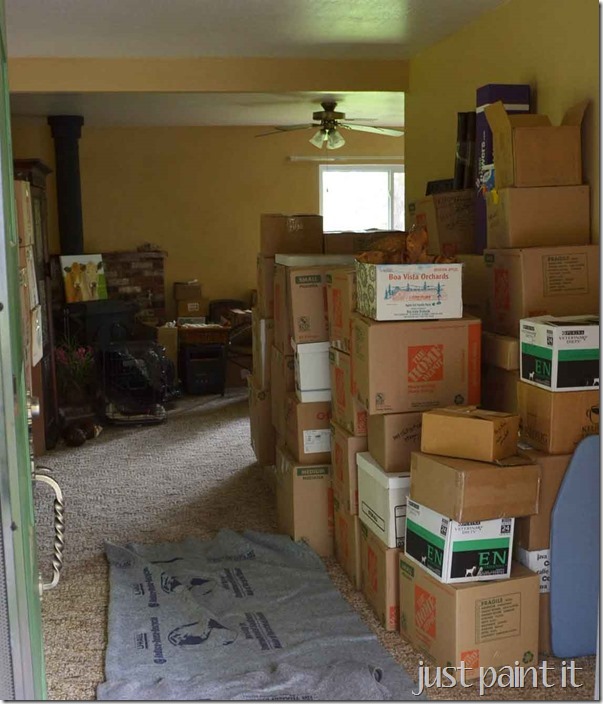 I had told them if the box was labeled “Kitchen” to just stack it against this wall.

For quite a while I sat out by their truck, directing them to Upstairs, Downstairs or the Garage. Periodically I’d go inside to see how things were going, empty a wardrobe box or two, then back to the truck. Things seemed to be moving quite nicely.

Did I mention we were all exhausted? 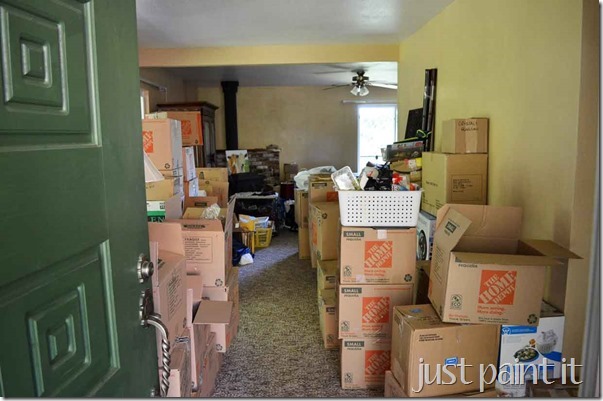 Um, that one wall turned into two. Two walls, stacked full of kitchen stuff? That can’t be right. I packed all of the kitchen. Hmmm. 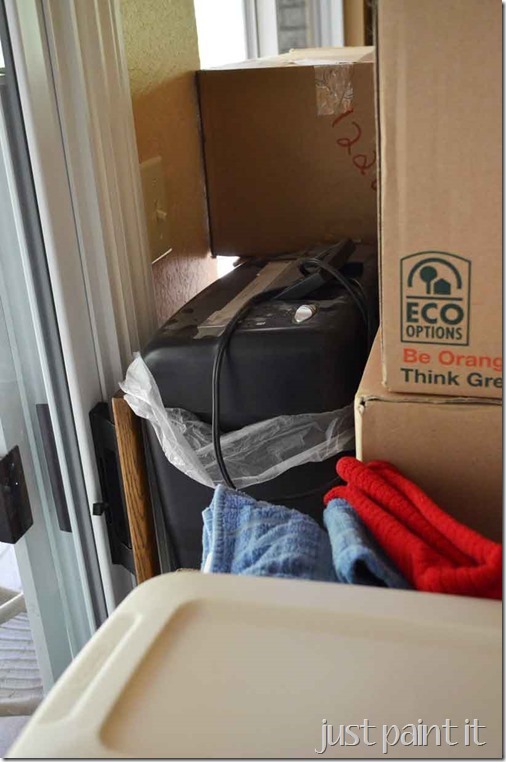 Well, looky there. It’s the paper shredder in with the kitchen stuff instead of downstairs in the office.

I wonder what the downstairs looks like after 6 guys have been unloading furniture and boxes for 4 hours? 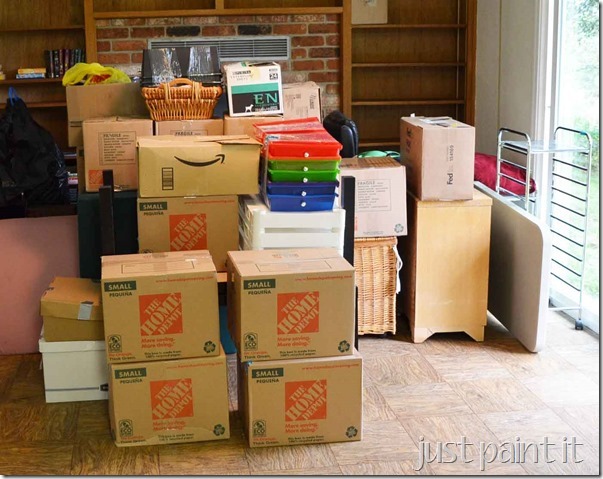 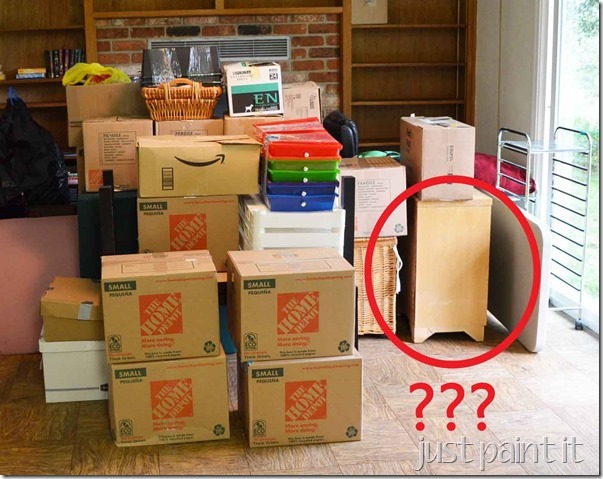 Why is my nightstand sitting in the middle of the sitting room and not in my bedroom?

Oh, who cares, I thought, after being up since 5 a.m. I can move a silly nightstand by myself.

They’d set up all of the major furniture, moved the fridge, washer & dryer downstairs, hooked up the washer, and set up our beds. Plus, they unloaded a ton – and I mean a TON – of boxes. Who cares if a silly nightstand is in the sitting room and a paper shredder is upstairs instead of down?

Yes, I did not one, but two, walk-throughs with Dakota to make sure everything was in its right place. Yes, they moved this thing there and that thing here for us. And, yes, I was bone-tired and really didn’t care I just wanted it to be OVER.

Guess what. It’s been over two weeks and it’s not over. I’m still sifting and sorting thru boxes, trying to find things. I’ve lost my temper so many times but you know the saying – when you point a finger at someone else there are three pointing back at you. Yep, I should’ve taken greater care because now I’m the one stuck with this mess. 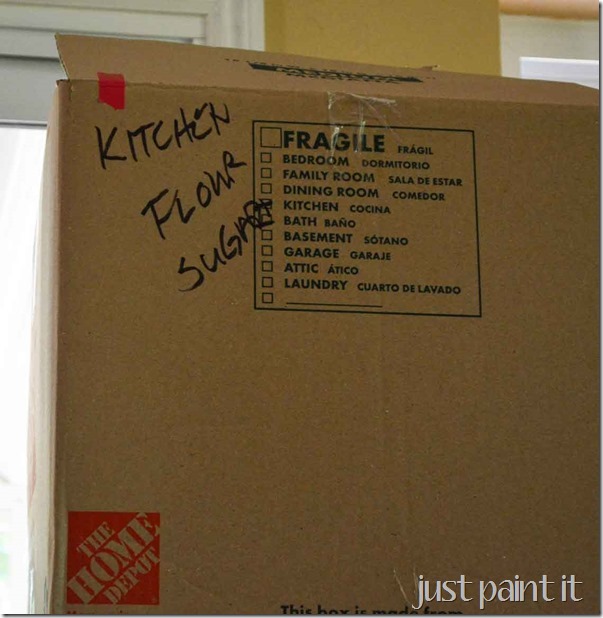 Just the other day I finally unpacked this uber heavy box. Where was it, you ask? 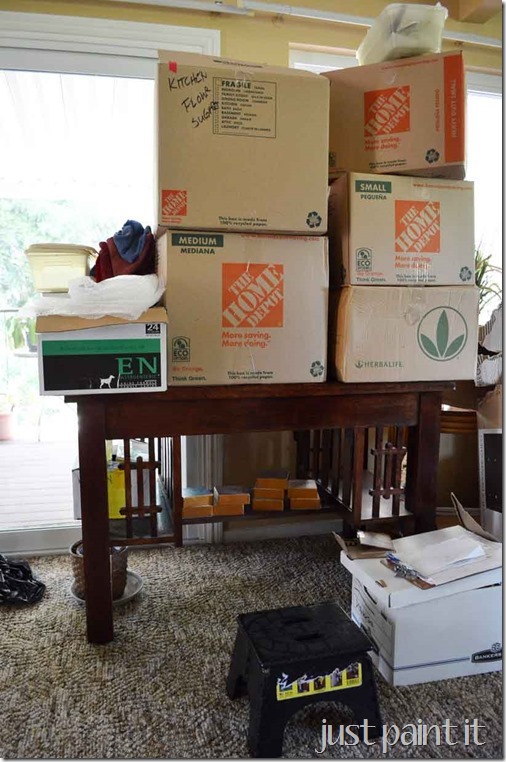 Piled high atop another huge box, on top of a desk, so that I needed a step stool to even reach it. Forget about moving it because that thing was incredibly heavy.

Do you think the movers just might have noticed this fact?

Apparently whoever stacked this heavy box didn’t notice. Because I had to take out the flour, and then the sugar, and then each and every other thing packed inside until I could manage to bring the box down to the floor. Grrr.

That’s just one example of why I should’ve cared when they were still here! Don’t even get me started on the garage. 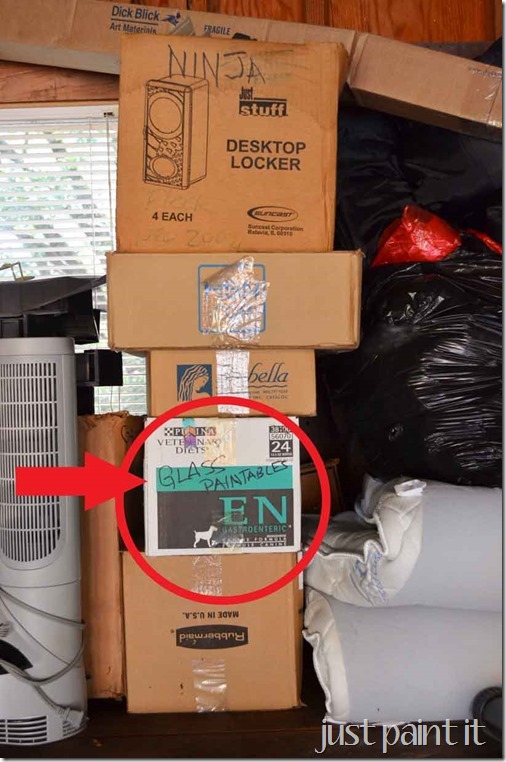 Who stacks not one, not two, but THREE boxes on top of something clearly marked GLASS paintables, huh? Who does that?!? Oh, and notice that the box underneath is totally upside down.

Do you wanna know how frustrated, angry, and completely exasperated I’ve been? For two weeks!

Yep. That was me who did not do those things. And yes, it’s taking a lot, lot longer to get settled than I thought it would. But, hey, I learned a lot through all of this crapola.

I also learned the hard way that there are things that could’ve and would’ve made everything go a lot easier on the movers and, therefore, me. Not to mention save time which would’ve saved money.

Next time I’ll share those tips with you. If you’re not planning on moving any time soon, that’s okay. At some point, you will. It’s just part of life. And trust me, these tips will save you hours, no days, of aggravation.