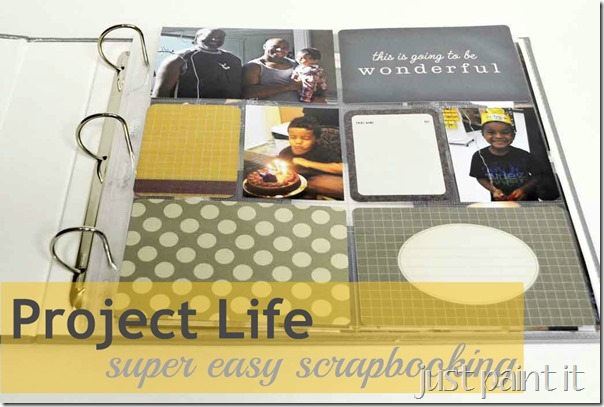 This post is part of a paid campaign with American Crafts, but all opinions are my own.

Ever since my husband passed away last year I’ve been heartsick that I have so few photos of him. What’s worse is, the ones I do have are all digital and have been reduced for internet sharing.

Not good for making prints.

When American Crafts offered me the opportunity to make a Project Life album, I jumped at the chance, knowing I’d really have to search for photos of Marlon.

Not of Santino though. I take photos of my poor grandson at nearly every breath. And it’s gotten worse since his Poppy died.

Good thing he loves his gramma.

For my album I used three components – 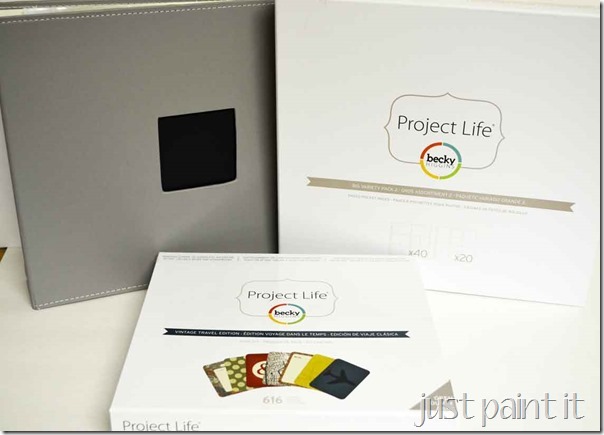 A core kit, photo pocket pages, and a beautiful album. What I love about Project Life is it’s a super simple scrapbook system that doesn’t require glue, scissors, tools, and best of all, no special skills.

Perfect for someone who’s never scrapbooked, not to mention ever completed a photo album.

Better late than never. And the whole reason why I wanted to write this post is so others don’t make the same mistake I made and not take pictures of your loved ones and your life!

I can’t tell you what I’d give to have shoeboxes full of 21 years’ worth of photos.

But I don’t have them. Which makes those I do have even more special and worth keeping them safe and displaying them so I can actually see them. 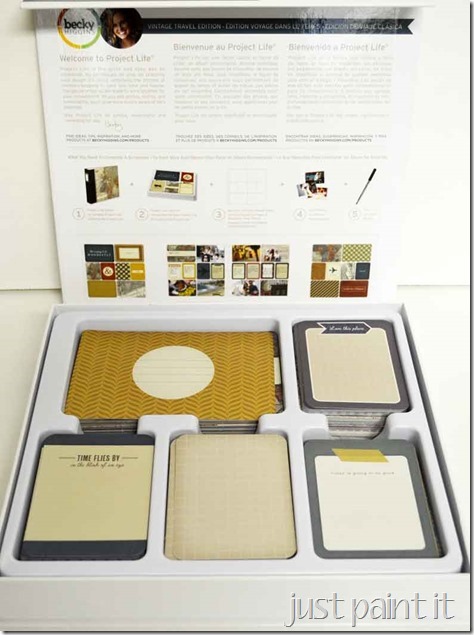 To get started, you’ll want to choose a Core Kit. I chose the Vintage Travel Core Kit because of the deep blues, reds and browns, along with a variety of darker neutrals.

Even though my photos don’t involve travel, this core kit comes with a variety of travel icons which so fun and I hope to use for future albums.

There are lots of other core kits available and Michael’s carries one of the largest selections, including two exclusive core kits – this Vintage Travel and The Dear Lizzy 5th and Frolic. That core kit features an array of light blues, pinks, greens, yellows and airy neutrals. The fun icons include birds, trees, foxes, houses, keys and clipboards. The edition has a distressed feel. Michael’s also has several exclusive albums as well. 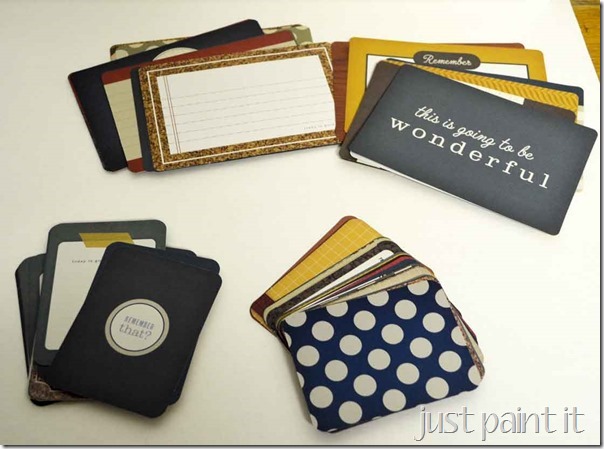 I started my album by sorting through all of the cute cards in the core kit. Some have sayings, some have icons, others have writing blanks, and there are cute patterns on all of them.

Now, you scrapbookers out there are wondering why I didn’t start with my photographs, right?

Yes, well, I know that now. But that’s the cool thing about Project Life – it’s great for newbies like me, as well as veteran scrapbookers.

You can’t mess it up!

Trust me. This is unbelievable simple, yet so cute when you’re all done.

When I say “simple”, I mean Project Life. For me, this wound up being extremely hard, just because of the emotion tied up in all of these photographs.

I was totally unprepared for what I was about to go through. 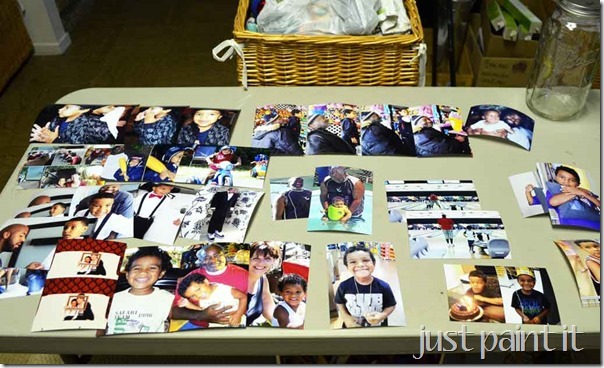 Truth be told, I was fine sorting through all the pics on my computer. I sized them for the page pockets, blew them up as best I could, and uploaded them to be printed by a drug store.

I wasn’t about to fuss with my printer for this many photos.

That’s when I knew I was in trouble. This was not gonna be easy.

I sorted and grouped them. Then I realized the error of my ways. 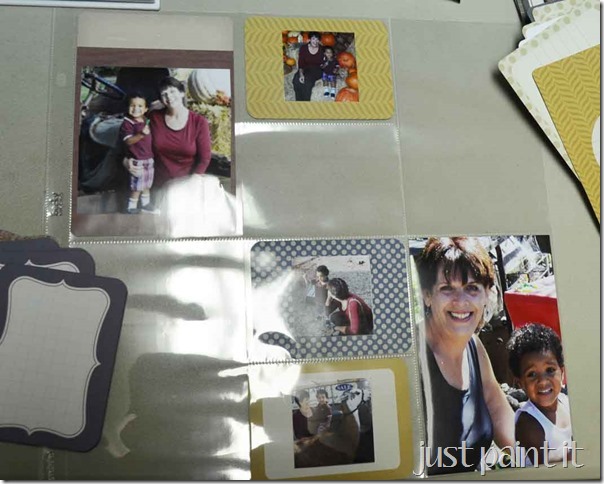 The page pockets have openings for 4 x 6’s and 3 x 4’s. Some are ‘portrait’ or vertical and some are ‘landscape’ or horizontal.

I hadn’t planned the pages before I picked the photos. So I had portrait and landscape for the same activity.

No worries though. I can just go back into my computer and resize them to fit and slide them into the pockets. 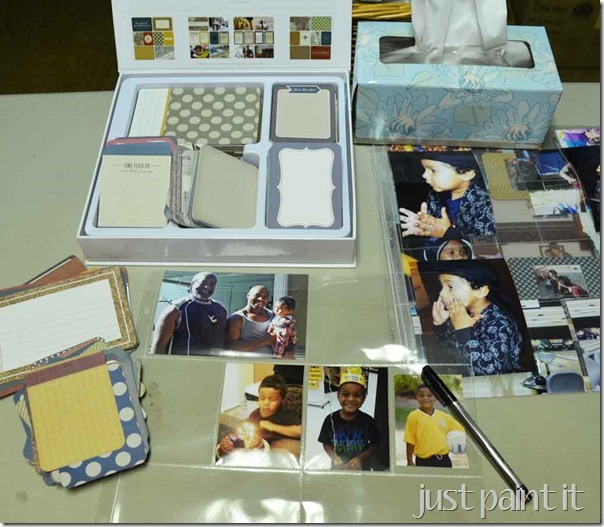 I kept going with what I had, filled all of the pockets, and then sat down to choose core kit cards and write some memories. 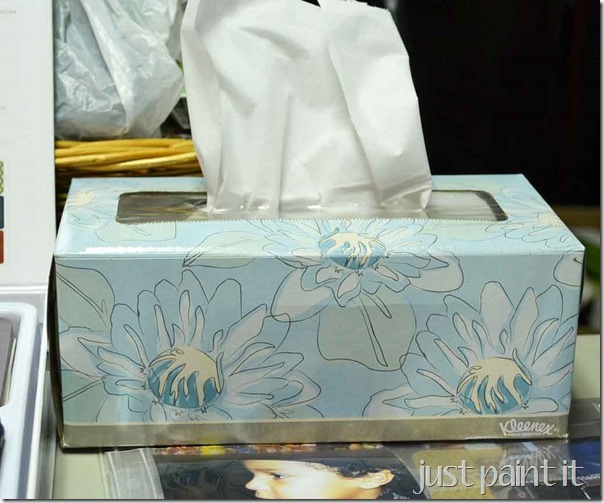 Did you see what else was on the table? Yeah. That box is now empty.

There is just something magical about photographs.

I never realized it before but, oh, I sure do now. 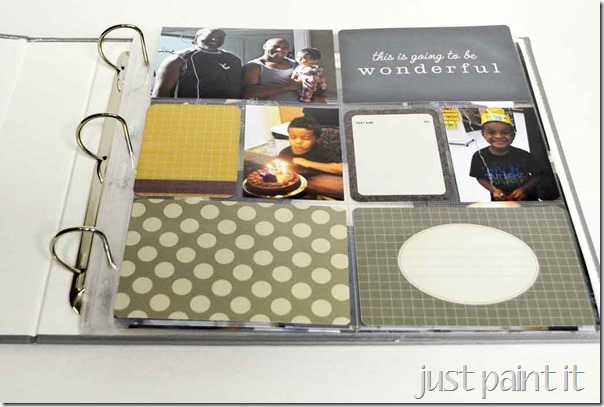 I gave up on the ‘writing the memories’ part and patted myself on the back for making an album that ‘hurts so good’.

I totally stole that from one of my Facebook friends . . . but it’s so apt.

I have plenty of space, and time, to write the memories when I’m ready. Plus, I can add more photos simply by sliding them into the pockets. Or add more pages too.

I am in love with Project Life.

Wanna see some of my pages? 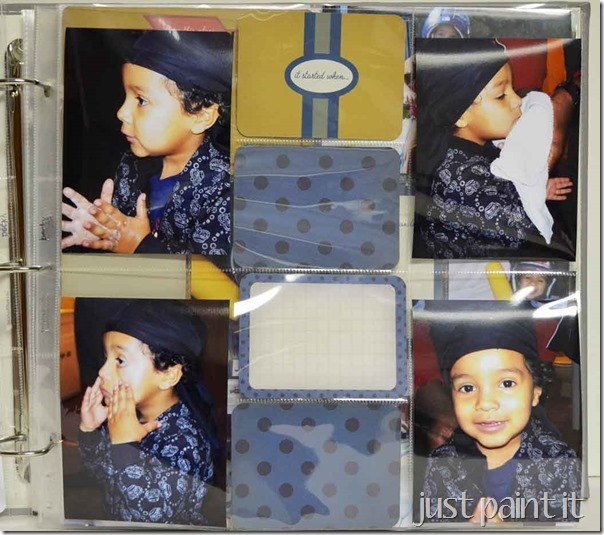 Santino when he was not even two. He noticed how Poppy wore a ‘do-rag’ and wanted one on his pretty curls.

There was lotion everywhere.

Silly thing to record in photos, right? Huh uh. This was our life. 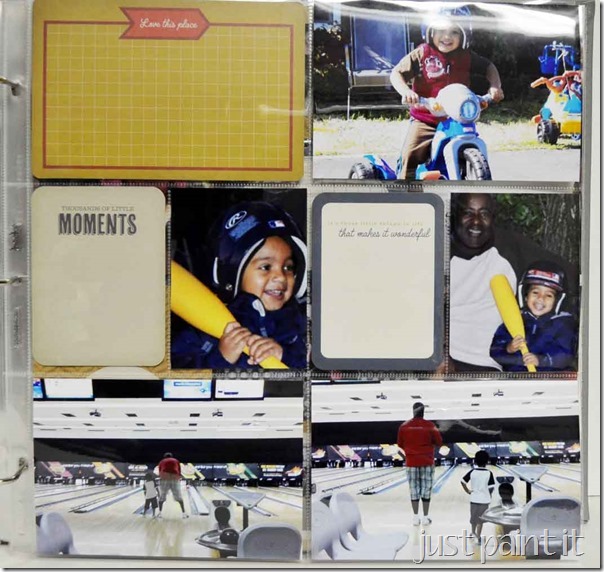 Those two were inseparable. I’m not kidding. 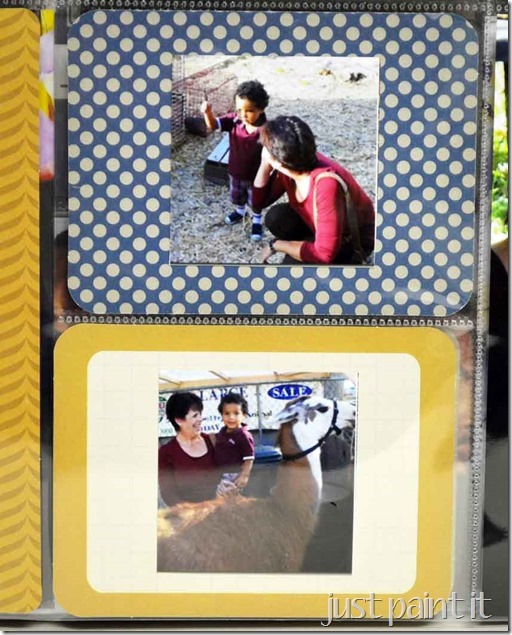 Oh, I was around too! 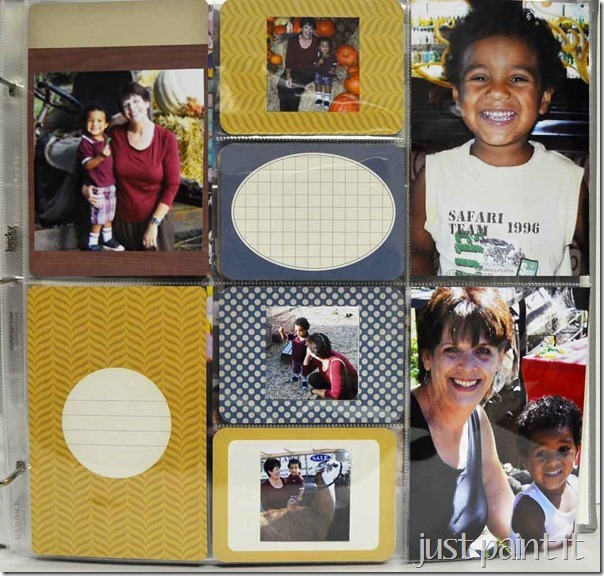 That photo in the upper left corner was Marlon’s favorite of Santino and me. It was on his phone and on his computer wallpaper.

But we never printed it out. 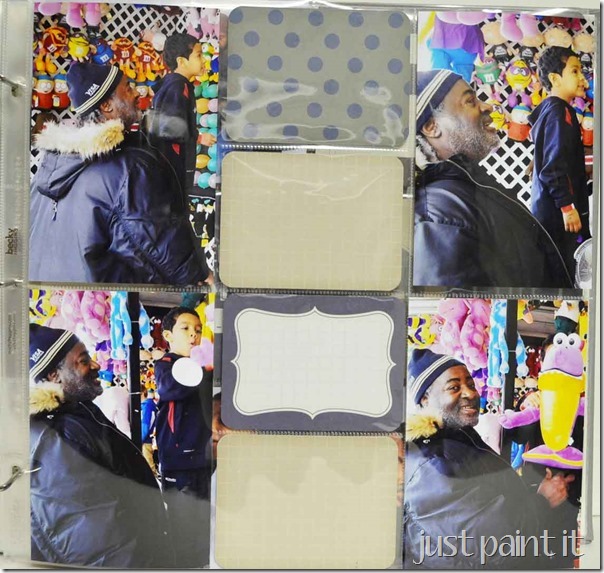 Another seemingly unimportant day at a neighborhood carnival. Santino threw darts at balloons . . . lots and lots of darts . . . and ‘won’ a prize.

It took that child fore.v.e.r. to choose.

Marlon? He just was lost in Santino’s joy. Patient as all get out. 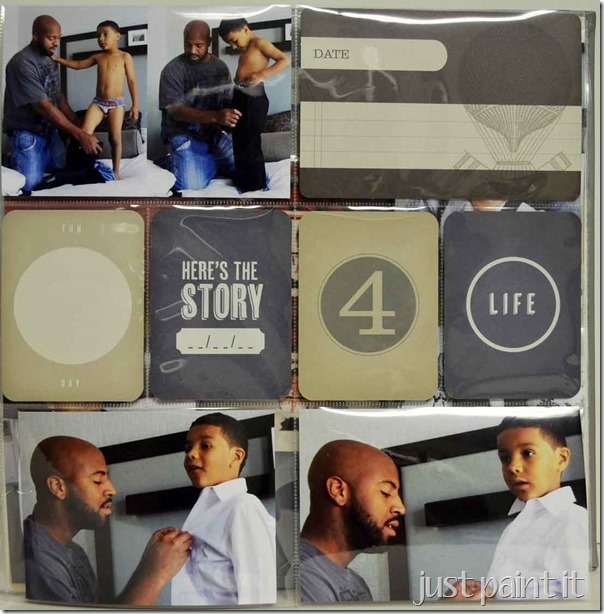 A quality he passed down to our youngest, Tino’s dad.

I watched as he struggled to dress Santino in a tuxedo for my nephew’s wedding.

It was quite comical to watch. I needed the levity.

The wedding was five days after Marlon died. 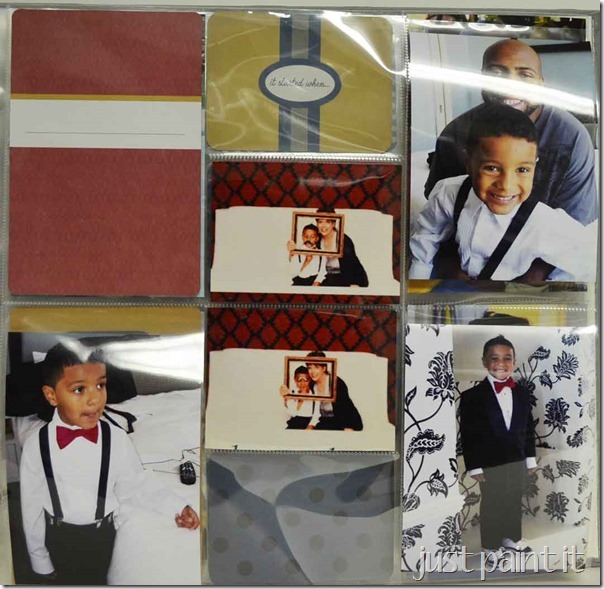 If he isn’t the cutest dang ringbearer in the entire world, I dunno what! 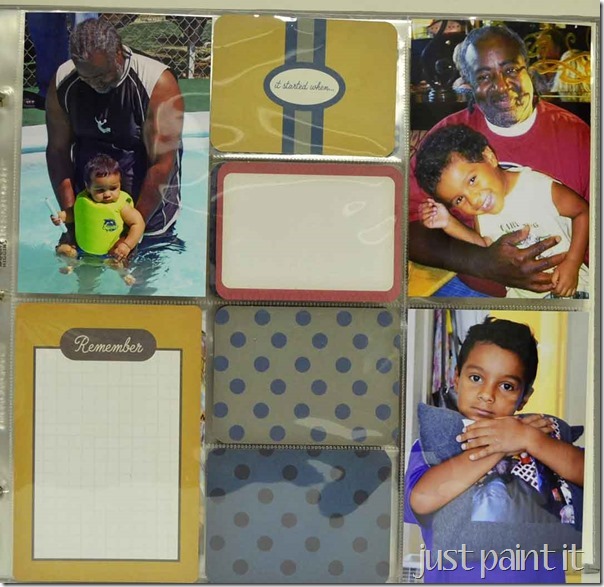 I have more photos of the two of them that’ll fill this page, and more. But these are my favorites right here.

Marlon was so insistent that Santino be in the pool his first summer. At least Marlon enjoyed himself.

And the photo in the lower right, that was the birthday present I made for Tino last year. It’s a pillow with a photo of him and Marlon on each side.

The pillow is made from the pants Marlon wore to the E.R.

The last pants he ever wore.

Now you see why I went through that entire box of Kleenex, huh? 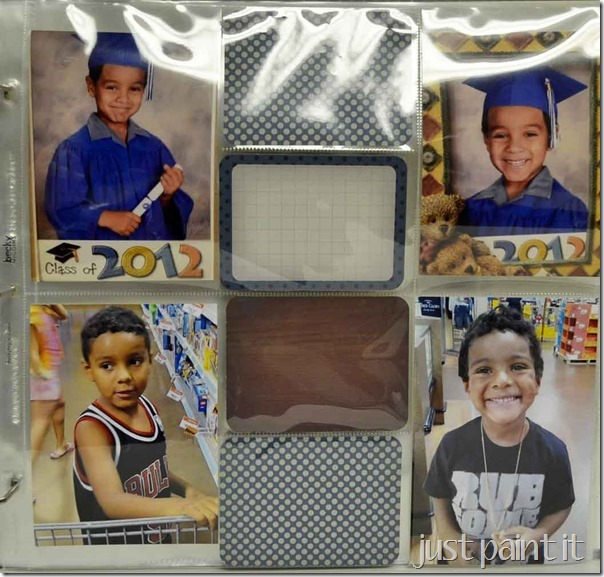 But this is the last page . . . so far. Santino’s ‘graduation’ from preschool, shopping with Gramma, and the lower right . . . his first day of kindergarten when I picked him up from school.

He asked me if he could wear Poppy’s gold marlin that I always wear. He knows it’ll be his one day.

It was a milestone day. He had cried to his mom three days before school started, “my Poppy won’t be here to see me go to school!” So I made sure I was there, at least to pick him up.

We made it through that day. Together.

And we’ve made it through this last year.

Tomorrow he starts first grade. I’ll be there, camera in hand, ready to photograph our Life. 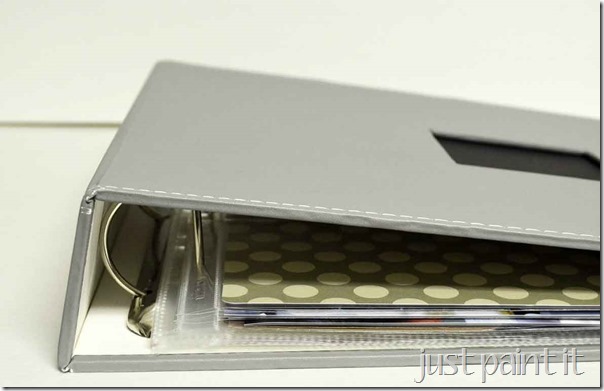 Those photos will go into this album too. And I’ll be stopping by Michael’s to pick up another album, just for Santino.

This one’s for me.

I want to thank American Crafts for providing me with this wonderful opportunity – a huge gift really – to use Project Life. Obviously I love it.